Excitement every minute in Sardinia as the WRC championship made its rendezvous in Italy, only the name of the winner came as no surprise.  Sebastien Ogier's win, his 20th, equalling that of fellow Frenchman Didier Auriol was however hard fought, battling against the disadvantage of running initially first car on the road in stage cleaning circumstances.  The two top VW drivers were both running ahead of the field on the first long day, afflicting Ogier even more than his teammate Jari-Matti Latvala.  Three Volkswagens finished in the top four, the only intruder being Mads Ostberg's Citroen in second place.  It was a bad event for Hyundai despite leading 1-2 in the early stages when running order was the most critical, and a disastrous event for Ford who lost Hirvonen's car in a road section fire.  Elfyn Evans however again drove safely and finished fifth, but Robert Kubica had been the best Ford until losing a wheel, his ninth off road incident in the first six events of the season. 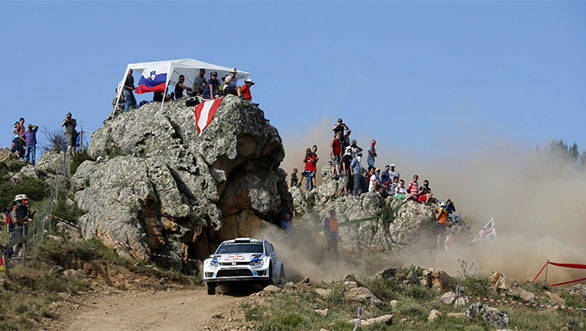 As the middle of the season approached, Sardinia was effectively Latvala's last chance to establish his claim to rallying's throne.  For two days he was doing as best as he could, but there were problems when he had a brake problem on stage 2, losing fluid due to a loose caliper nipple.  The time lost meant he reduced his chance to maximise his running order advantage.  He was able to bleed the system before stage 3 and still had hopes of keeping his lead despite an engine sensor failure midday through Day 2 but then he broke a wheel and punctured on the final stage of Day 2.  He lost two minutes changing a flat tyre in mid-stage. This allowed Ogier to inherit the lead and safely to ease his pace.  In the third VW, Mikkelsen back with his original codriver Ola Floene and back again using Norwegian language pacenotes, had trouble with a broken damper after hitting a rock, but finished fourth.  In true champion style, Ogier came through without troubles, unflustered.  The VW team rounded off their tenth successive rally win with their first 1-2-3 result on the Power Stage.

On what promised to be the hottest, and because of heavy winter storms the roughest rally in the 2014 season, the Volkswagens had expected eventually to do well.  Taking full advantage of the Day 1 running order opportunities were the Hyundais, with Thierry Neuville and Juho Hanninen in first and second place after stage 4, but then it all went wrong for them.  Neuville stopped with suspension trouble, which he was able to repair on the stage, but Hanninen crashed.  This left Hyundai's rookie driver Hayden Paddon alone going well rising to eighth place until he had a potentially damaging engine misfire on the final stage of Day 2 and the team ordered him to stop.  He was able to restart for the final day after the problem was rectified to eventually finish 12th.

For M-Sport the competition was hotter than they would have wished, when Mikko Hirvonen's Fiesta WRC burst into flames on a road section and was completely destroyed.  Robert Kubica had been lying an impressive fifth but his off road experience allowed Evans to finish fifth ahead of privateer Martin Prokop despite a painful back injury and Henning Solberg's private Pirelli shod Fiesta, the highest placed non Michelin finisher.

Ostberg once again maintained the interests of Citroen, after also suffering running order troubles on the first day, impressively being unfazed as Latvala mounted a charge on the final day to try and pull back up from third place.  His Citroen teammate Kris Meeke had a mixed event, damaging his car at a heavy landing on the opening super special held in Cagliari, happily without penalty or time loss, but then his battery was flattened and he missed five stages, having to run the rest of the event at the head of the field. Volkswagen extended their lead in the Manufacturers' series - now nearly 120 points ahead of Citroen. Ogier also continued to increase his lead in the Drivers' championship over Latvala, now 33 points ahead.

An impressive 22 cars started in the WRC2 category but the competition was spoiled by problems with the results service after many incidents occurred which left the organisers unable to make decisions fast enough to solve.  Both times the 59km stage was interrupted because of problems (on stage 11, because of the crash of Yazeed Al Rajhi) and then on stage 13 because of the fire of Giuseppe Dettori.  The organisers suffered from a lack of information from the stages when making corrections to the stage times, drivers finding they were given interruption times which later it was discovered they were not entitled to.  Al Rajhi, Nasser Al Attiyah, Yuriy Protasov, Karl Kruuda and Ott Tanak were the pacemakers but both Al Rajhi and Al Attiyah went off the road, leaving Lorenzo Bertelli the undisputed winner.  Both Bernardo Sousa and Protasov claimed they were given wrong times and this left Sebastien Chardonnet (Citroen DS3 R5) uncertain of his provisional second place, while the organisers never addressed the request of Nasser to amend his time because the dust obstruction caused by Neuville on stage 5, so we will never know if he had wrongly lost the lead through Friday afternoon in the category.  Issues then became more complicated when Sousa was penalised 5 minutes for using two too many tyres during the event.  In the WRC2 championship standings Bertelli has taken the lead, Mitsubishis of Max Rendina and Juan Alberto Alonso are 1-2 in the Production Car Cup series.

The battle of the tyre manufacturers was most noticeable in the WRC2 category where competitors were represented on all four brands.  Pirelli user Bertelli scored his first win in the WRC2 category, with the brand also taking three of the top four places and also winning the Production Car Cup with Rendina's Mitsubishi. This was the first appearance of all three types of R5 cars on a WRC event, Kruuda struggled with engine overheating on his Peugeot 208 T16, losing a stage because of a broken suspension bolt but proved competitive.  Chardonnet, on his first rally in a four-wheel-drive car progressively got more confident and had a quieter run. Top finishing Fiesta R5 car was that of Quentin Gilbert who missed a stage when a wheel fell off, but the fastest was Ott Tanak who went quickly after endless troubles on Day 1.