Hyundai sprung a surprise 1-2 result on the dramatic Rallye Deutschland, an event marked by an incredible number of top driver off-road errors. Both VW's top drivers Sebastien Ogier and Jari-Matti Latvala and then Citroen driver Kris Meeke crashed when leading, and Meeke's teammate Mads Ostberg was left to stop VW clinching their second successive Makes title at this time. A first WRC victory for Hyundai and Thierry Neuville only came after a dramatic crash in Shakedown, which forced his mechanics to spend 18 overnight hours making repairs while his guest teammate and last year's winner Dani Sordo survived initial unfavourable running conditions to finish 40 seconds behind the Belgian. It was only the second WRC win for a Belgian driver and the first in Europe and on asphalt, and besides all that it was the first win by a new manufacturer in the championship since 1999. Given the early domination firstly by Ogier and then by Latvala, it was no surprise that Neuville was able to win by scoring only one fastest time. This event lived up to its reputation as the event in which even the greatest drivers are caught out. The series of crashes towards the end of the event led to three different event leaders in as many stages, and the world champion suffering two major accidents within three stages. An impressive result for Elfyn Evans who finished fourth and won the PowerStage, ahead of M-Sport teammate Mikko Hirvonen. 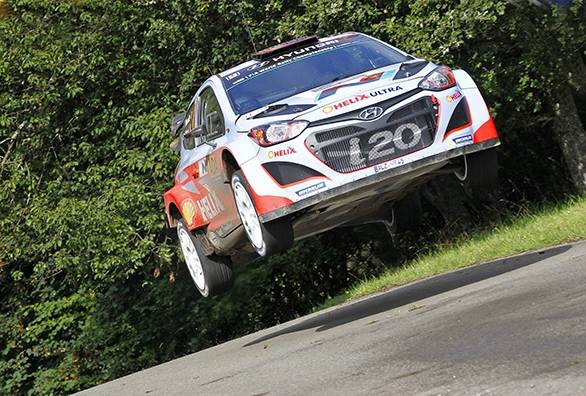 Neuville airborne on his way to victory at Rally Deutschland

It seemed certain that Volkswagen would perform a spectacular championship clinching win. Sebastien Ogier and Jari-Matti Latvala had new cars for the event, the Polo R WRCs finished 1-2-3 in the pre-event shakedown test, after the first five stages Ogier led Latvala and they shared the first and second stage times. The chink in the German armour came on the final stage of Day 1 when Ogier dramatically slid backwards off the road. Efforts to regain the road were impossible, and he drove downhill through a vineyard until he reached a lower level road which he joined only after jumping his car over a two metre high wall. Amazingly the car was driveable but the driver gained the mandatory ten minute penalty. Ogier restarted the following day but on the second stage lost control over a jump and wrecked his car when it impacted a guard rail. Latvala meanwhile had taken over the lead which through Day 2 increased to around a minute, ahead of Kris Meeke in his Citroen, until the Finn fell foul of a remarkably slippery first stage on Day 3. His rally also ending in the vineyards. For the first time since they entered WRC competition the VW team scored nothing. On home ground, at that! It was even worse than their disaster on home ground twelve months earlier. Their only consolation now was that one of their three drivers is guaranteed to win the Drivers' title. 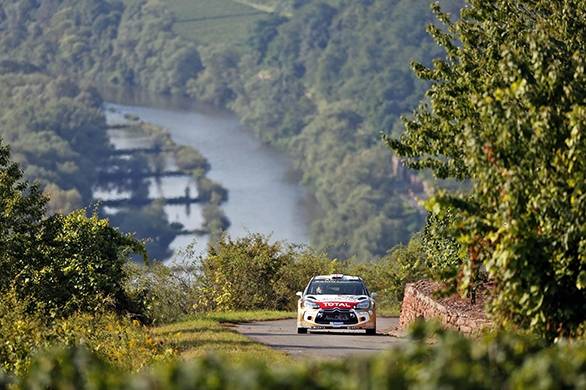 Kris Meeke became the first British driver to lead a WRC event in decades, until he crashed out, putting an end to any hopes of victory

When Latvala went off the road, Kris Meeke found himself the first British driver to lead a WRC event in over a decade but the glory was momentary, as he slid into a wall and wrecked his Citroen's rear suspension, gifting the lead to Thierry Neuville. Finally attention could be focused on other competitors. Andreas Mikkelsen was lying third overall while battling for fourth place were the M-Sport drivers Mikko Hirvonen and Elfyn Evans. Evans finally got the better of his veteran teammate, showing great maturity for someone with slender WRC experience on asphalt. Robert Kubica had edged into tenth place after an earlier off-road excursion but retired with gearbox trouble. Over at Citroen, Mads Ostberg struggled throughout the event but he stayed on the road and was there when Citroen needed his points. The team attracting the glory at the finish on Sunday was Hyundai. Neuville and Sordo each had new cars for the event while Bryan Bouffier had the old car normally rallied by Hayden Paddon. Bouffier had been lying ninth when he had a close encounter with one of the treacherous hinkelstein stones beside the military ground stages, and on the final stage of the event he went off the road again and had to retire.

There had been drama all the way through the event, beginning when the Stewards banned Craig Breen from starting, for not following correct procedures after his back injury in Finland, through to the moment when Neuville rolled into the vines before the rally, then everything which happened as the event progressed. "One swallow does not a summer make" is an old English saying, one victory in these circumstances does not mean that Hyundai is now a fully competitive team. The happiness in the team that a one-two victory could come on only the ninth WRC outing for the new team was a mighty impressive inspiration. The teams left Germany with just ten points covering Citroen, Hyundai and M-Sport. Neuville and Hirvonen are now equal in fifth place, just one point behind Ostberg.

Right from the outset the Citroen DS3 R5 of Sebastien Chardonnet went into the lead of the closely contested WRC2 category, ahead of Nasser Al Attiyah's Ford Fiesta RRC, both brand new cars for the occasion, but it did not last long. Chardonnet lost a lot of time with power steering trouble and Al Attiyah was saving his efforts for the tough military stages on Day 2, only to puncture and lose time. Bernardo Sousa went in front in the Tamrazov team Fiesta RRC until he went off the road early on Day 2 and retired as did Chardonnet. The rest of the event saw a tight battle between Pontus Tidemand, Julien Maurin and Ott Tanak all in Fiesta R5s. Tidemand punctured when in the lead, dropping to fourth, as exactly did Maurin while Tanak struggled not having a choice of available tyres in the rally's changeable conditions. The lead in this category on the final day was constantly changing as firstly leader Maurin punctured and broke a wheel on the penultimate stage, Tanak took the lead with one stage to go but at the finish it was Tidemand who gained victory in the category. With the two leading championship drivers in the WRC2 series unregistered for this event Lorenzo Bertelli maintains his lead now over Tanak who has risen to second and Tidemand's category win sees him rise to seventh, 41 points behind Bertelli, but he has only competed twice and scored both times.

German driver Christian Riedemann went into the lead of the WRC3/Junior categories until he had gearbox trouble necessitating a delay having this changed at service allowing Eric Camilli, on his first rally outside France, to go ahead. He held the lead into Day 2 before he crashed, allowing series leader Stephane Lefebvre take over with Riedemann eventually finishing second. Marti Koci rose up to third place before he went off the road so Quentin Giordano finished third. Abu Dhabi driver Mohammed Al Mutawaa and Swiss driver Federico Della Casa both ended their events with accidents. Stephane Lefebvre retains the lead in both the WRC3 and Junior categories. Lefebvre is ahead of Christian Riedemann and who is equal on points Quentin Giordano, but Riedemann has the advantage over both with one event in hand.

In the Drive DMack Fiesta Trophy Yeray Lemes held the lead for virtually all the event before he stopped on the final morning with alternator belt failure allowing the British driver Tom Cave to win. Other notable finishers were Marijan Griebel who won the R2/RC4 category in an Opel Adam car, while Richard Tuthill was the sole entrant in the GT category and finished in his Porsche 997 GT3, going best when the conditions were wet. Philipp Knof's Citroen DS3 cars won the R1/RC5 category.