Well, can you believe a word that the champion says? From the moment he won the Sweden Rally and realised he would have to start first car on the road in Mexico, Sebastien Ogier assured us it was completely impossible for him to win this rally. Not only was he wrong, but he led the event from the second stage to the finish and his winning margin of 1m18.8s is the biggest in the WRC since his win in Sardinia last year. But the depletion of Sebastien's credibility rating could not disguise the mastery of his profession as he scored his third successive win in Mexico, and his 27th WRC victory put him third in the list of winning-most WRC drivers. Like in Sweden, victory in Mexico came because others, including Jari-Matti Latvala, Kris Meeke, Ott Tanak and Thierry Neuville, squandered their chances leaving Ogier sailing into the distance. In the end the Volkswagens were again unbeatable, but the unpredictability of the event was highlighted by no fewer than eight drivers scoring scratch stage times during the rally, including both Citroen and Hyundai team drivers, and on a publicity downtown stage, Robert Kubica in his private Ford. 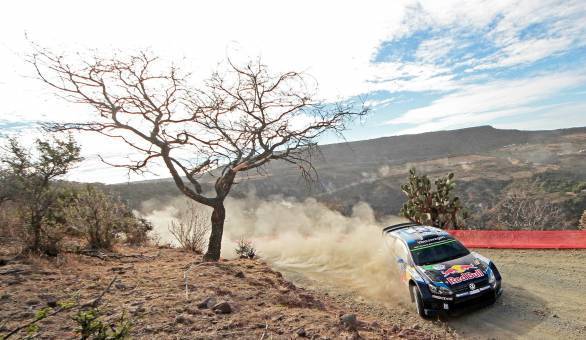 Sebastien Ogier makes it three out of three at Rally Mexico

Rally Guanajuato Mexico had one of the smallest entries but was one of the most intense events in the championship. More than half the entries were in either World Rally Cars or cars converted to RRC specification. In WRC2 the reigning champion Nasser Al Attiyah was unexpectedly back to defend his title and found that he had a surprise rival in the form of Yuriy Protasov, who headed Nasser until six stages from the end. The tensions continued through the event. On the second run through the 42km Otates stage on the Saturday the fastest three drivers were separated by 1.7 seconds. Ogier did not lead all the way however. The winner of the short opening city stage was Thierry Neuville, running second on the road, who for the following six stages was close behind Ogier, despite the Frenchman's loud proclamation of the disadvantage of running first or second car on the road on days 1 and 2, until the Belgian slid off the road and rolled. 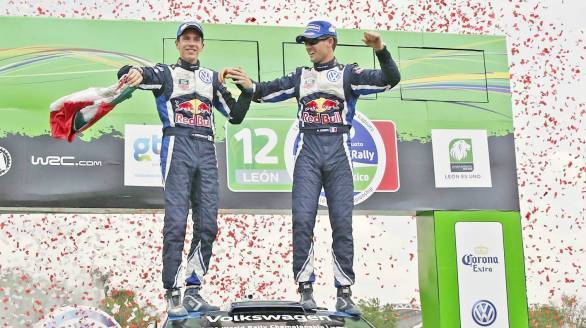 Volkswagen were the winners but they had their problems. Latvala spent the first morning struggling with the handling, then stormed back to make two scratch times in the afternoon before going off the road at half distance and wrecking his suspension. This left Mikkelsen in his 2014 specification car, gaining confidence and moving up to third position, preparing to make a charge for second place. In second place by now was the Citroen of Mads Ostberg making steady progress and gradually increasing his speed. Citroen Total Abu Dhabi Racing came to Mexico as the worst placed of the four works team in the championship and badly needed a solid result. Kris Meeke's previous lacklustre results gave him an ideal starting position of ninth on the road and he delivered a fastest time on the first stage on Friday but then went off the road on the next stage. More pressure therefore descended on Ostberg. He again had gear selection troubles early in Day 1 before later making three fastest times, having to apologise for being so grumpy about his car problems. "I am still a young boy, crying one moment and smiling the next!" Mads settled into second place around a minute behind Ogier.

Hyundai Motorsport were back with their usual drivers in Mexico. Dani Sordo was fit again after his mountain bike mishap, scored two scratch times and eventually finished fifth. Both he and Neuville drivers had gearbox problems, Sordo's being changed while Thierry Neuville had his patched up. Neuville had been in fine form when holding second place until his roll but three missed stages saw him drop to 19th.. On the final day Neuville recovered to eventually finish eighth, rising two places on the final stage. The support driver Hayden Paddon went off the road, restarted on the Saturday but then suffered engine overheating issues. 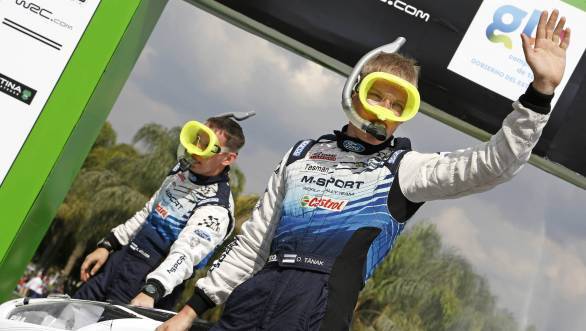 Ott Tanak made it to the finish even though his M-Sport Ford spent a good 10 hours submerged underwater!

Meanwhile the highest level of excitement was focussed on the M-Sport team and a dramatic first day moment when Ott Tanak impacted a bank. This shot the car off the track to the other side of the road  and rolled down an embankment into a reservoir. Happily the crews swam to safety but it took around ten hours for the submerged Fiesta to be brought back to the shore and taken to the service park, where the team then set about preparing the very wet car to restart the rally the next day! This it did, but not for long. Tanak finally managed to restart again for the final day and eventually survived to finish 10th manufacturer driver and gained a point for the team. These problems in turn threw pressure onto Elfyn Evans who gradually rose up to fourth place. Of the private team Fiestas, Martin Prokop was the best placed, lying sixth despite losing one of his spare wheels en route, which led to a session with the Stewards, this time without penalty. Robert Kubica had a frantic time, going off on Day 1 and then suffering puncture problems on Day 2. Lorenzo Bertelli stopped on all three days of the rally, finally retiring on the first stage of the final day when he went off the road. Former Production Car champion Benito Guerra had a Fiesta for this event but missed two stages after a heavy side impact. 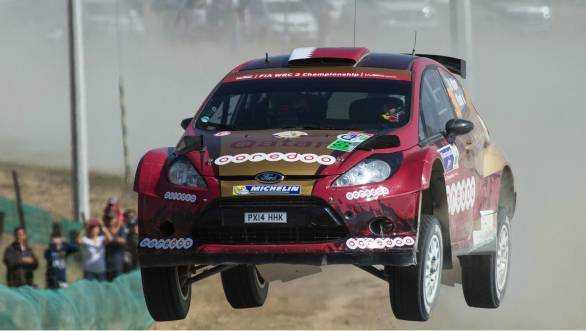 Win in the WRC2 class went to Nasser Al-Attiyah, fresh on the back of his Dakar success

The return of Nasser Al Attiyah to WRC2 raised the already high level of competition. He steadily raised his game as the event progressed, and when the Pirelli driver Yuriy Protasov went off the road and stopped with a broke radiator, the Qatari found himself 7m46s ahead of the others, headed by the DMack drivers Nicolas Fuchs and Jari Ketomaa. It was a 1-2-3 result for Ford cars in the category, an RRC beating two R5 Fiestas, a Michelin-user beating the two DMack users, with Fuchs beating the team driver Ketomaa. Retirement came to Valeriy Gorban who went off the road in his Mini, and joint category leader Stephane Lefebvre in his Citroen R5 who rolled. There were eventually only two competitors in the Production Car support category, Max Rendina (Mitsubishi) who led after the first three stages, and Simone Tempestini (Subaru) who suffered various problems and who led until he stopped in the final stage. Rendina finally scored maximum points, a satisfying final twist in an ongoing complaint concerning Tempestini's irregular championship entry application.

Three rallies in and the surprise so far for 2015 is that Volkswagen main rivals in the Makes' championship is turning out to be Hyundai, separated by 24 points, with Citroen Total Abu Dhabi still trailing in fourth place, 57 points behind VW and 6 behind third placed M-Sport. The Jipocar Czech Team had risen into fifth place, due to the Volkswagen number 2 team having only been registered for one of the first three rallies held so far. And in the Drivers' category "title race" might be a misnomer to use with Sebastien Ogier now holding a 34 point lead over not his teammate Jari-Matti Latvala, who is currently lying sixth, but over Andreas Mikkelsen, with Thierry Neuville third a further 12 points behind. Jari Ketomaa, DriveDMack and Max Rendina each took the lead respectively in the WRC2 Drivers' and the support category Teams and Production Car series.