Sebastien Ogier got it all badly wrong. He said the championship was boring, it wasn't. Hyundai also got it wrong. They decided that Hayden Paddon should drive for their secondary rather than their official team - but it was Hayden who won the rally for them! Hyundai's victory and their 1-2 Power Stage result proved that Volkswagen finally have a worthy rival. Volkswagen arrived in South America confident that they would win Rally Argentina, aware that Jari-Matti Latvala stood more chance of victory while Ogier suffered unfavourable running order position. This rally was their last unconquered WRC challenge. After leading for over half the distance their expectations vanished when Latvala's front suspension gave way and he crashed. After Kris Meeke's surprise first win 12 months ago this was the turn of Paddon and his 57 year old codriver John Kennard, gaining New Zealand's first WRC win on his country's national ANZAC holiday. After Paddon very nearly lost the lead on the penultimate stage, everything finally turned out right, a veritable emotional roller coaster. 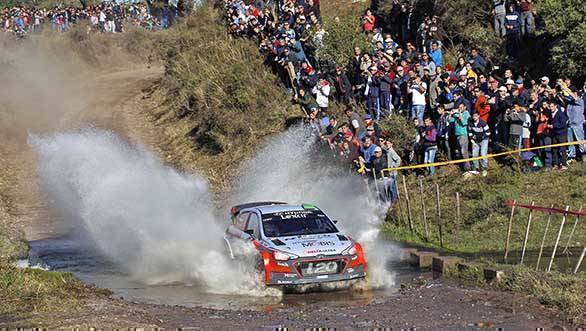 This turned out to be one of the most fascinating rallies in recent times, with Hyundai using every moment to keep up the pressure on Volkswagen, to such an extent that five stages from the finish VW driver Jari-Matti Latvala crashed out of the lead. Hyundai's Dani Sordo led the rally in the early stages and then Hyundai's secondary team driver Hayden Paddon went ahead when Latvala went off the road. The entry for Rally Argentina was disappointingly small. 28 cars took the start but of these six were national category cars, their drivers were ineligible for scoring championship points, but it produced the chance for local turbocharged Maxi Rally cars to be matched against the WRC2 R5 cars. The excitement in the battle for the lead was however intense, with reigning world champion Sebastien Ogier struggling on the first two days from running first car on the road against later runners Hayden Paddon and Ogier's teammate Latvala. This struggle got worse for Ogier on the Saturday morning and only finally eased on the second loop of Saturday's stages. After dampness on the stages on Friday limited Ogier's disadvantage but the drier conditions on Saturday morning was everything he feared. From lying 7.9 seconds behind the leader, three stages later the gap had helplessly increased to 45.6 seconds. Even after Latvala crashed, Ogier was 34.3 seconds behind Paddon, for Ogier a deeply depressing situation.

On Friday afternoon a fascinating battle between Ogier and Paddon developed and at the end of the day Ogier momentarily held second place only for that to disappear immediately the next morning. Behind these drivers the VW-Hyundai conflict continued with Andreas Mikkelsen striving to fend off Dani Sordo, while all the time Mads Ostberg was trying to keep a happy face at the wheel of M-Sport's Fiesta which the driver reported was again down on power. All Ostberg could do was to keep out of trouble, and apart from one moment in the fog on the final morning, this is what he did. While Paddon was having a generally trouble-free run, Hyundai's main team drivers were not so fortunate. Sordo lost time with a sticking throttle, apparently caused by damage to the floor of the car under the foot pedals while Thierry Neuville lost six minutes on the Friday with electrical troubles. Ostberg's teammate Eric Camilli however was having a steady run, following team instructions to bring the car to the finish. In the DMack team Fiesta WRC, Ott Tanak had an alternator belt failure when he was lying sixth and missed five stages. After an excursion off the road on the Friday, Marcos Ligato had a good run in his first world rally car drive for 11 years finished seventh ahead of Camilli and the privateer Henning Solberg.

It was a fantastic moment for Paddon and Kennard, Paddon saying at the finish: "I gave that final stage absolutely everything. Unbelievable. I can't describe. A huge thanks to everyone back home in New Zealand who sat up following what we were doing every night. After our tactical error on the penultimate stage I didn't think we had a chance to win. I can't believe it." In the championship standings Volkswagen's lead in the Manufacturers' series over Hyundai remained unchanged, in the Drivers' series Paddon's victory now saw him lying second behind Ogier.

Favourites in WRC2 had to be the late entry Elfyn Evans and the Peruvian Nicolas Fuchs (a regular Argentino championship driver) but Abdulaziz Al Kuwari was due to appear in the WRC for only the second time this year. Radik Shaymiev, from the Russian Republic of Tatarstan did not arrive. The top South American drivers in the category were Nicolas Fuchs from Peru, Didier Arias in a Skoda Fabia R5 and the regular WRC2 competitor Augusto Bestard in a Fiesta R5, both from Paraguay. In Shakedown Evans lost time with a gearshift problem which was eventually found to be due to an oil pressure sensor failure. On the first full day of competition Evans' fortunes tumbled when he arrived at the end of the first stage of the day (stage 2) with a deflating front tyre which had enabled Nicolas Fuchs to take a five second lead in the category. On the second stage (3) Evans stopped with electrical trouble. On the third stage (4) Fuchs suffered power steering failure, finding the steering was so heavy that his codriver had to change gear for him. Al Kuwari increased his new lead during the afternoon (7) over Didier Arias who was comfortably ahead of Ptaszek who had punctured and held up Fuchs. On the second stage of the afternoon Bestard stopped with a broken exhaust which allowed fumes to enter the cockpit. On Day 2 Nicolas Fuchs had climbed back to second place (1m38s behind Al Kuwari) while Arias lost four minutes with a puncture on the opening stage (10), Evans also punctured on the long stage. On the first stage of the second loop (13) the WRC2 leader Abdulaziz Al Kuwari went off the road. He was able to continue but had a punctured tyre to change and his car was running in two-wheel-drive, all of which cost him nine minutes and dropped him to third. So suddenly Fuchs was back in the lead again with Hubert Ptaszak lying second, three minutes behind. Elfyn Evans made fastest WRC2 times interrupted by a series of punctures (three in all so far through the rally) in all of which he had no knowledge of how they happened! Fuchs won the WRC2 category by well over four minutes from Hubert Ptaszek with Al Kuwari finally finishing third ahead of Evans and Bestard. Evans continues to lead the series by 20 points now from Ptaszek.

Michel Fabre was a sole entry in WRC3, for the third consecutive event, and finished again to take maximum points to now lead the series by 54 points.

This was the first year that 1.6 litre turbo Maxi Rally cars had been allowed to run in Rally Argentina. When Villagra did not arrive at the rally, the most competitive Maxi Rally entry was the Chevrolet Agile of Alejandro Cancio. Prominent non starter was Paraguayan Diego Dominguez, reigning Codasur champion. There were finally six National category cars which included five Maxi Rally cars (Cancio's Chevrolet, Preto's Peugeot 208, Padilla, Frisiero and Alvarez's Fiestas). Luciano Preto, the driver from the Tierra del Fuego, was fastest Maxi Rally car at Shakedown while on the opening superspecial stage Alejandro Cancio was fastest. On the Friday Cancio retired his Chevrolet with turbocharger failure. On Day 2 there was another major change on the rally when the top placed Maxi Rally driver Luciano Preto rolled his Peugeot turbo. The top placed National driver was now Geronimo Padilla's turbo Fiesta MR and he eventually finished in 11th place overall, 5.4 seconds behind the top R5 finisher.