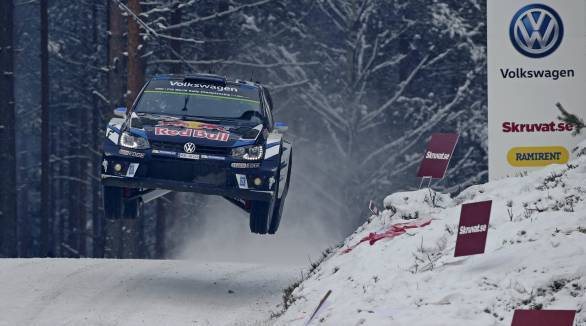 Ogier was the centre of attention throughout the rally, originally being angry at the circumstances created by the weather but very surprised how things transpired. At the finish he said, "I love this rally in Sweden apart from the terrible conditions at the beginning of the week. The organisers did a really great job so in the end we had a nice weekend. I'm very happy. Yesterday (Saturday) was a little bit too crazy, it was the most astonishing day. To be honest I drove like I never did in my life but I can say I had a little bit a lucky star with me".

For this event Hyundai had the same three drivers as in Monte Carlo but Paddon was elevated so that all three drivers were at the wheel of New Generation cars with Sordo relegated to the second level team. Citroen's PH Sport run team dropped Lefebvre and replaced him with Craig Breen for his first WRC event in a Citroen. The M-Sport WRC team was unchanged but for this occasion expanded further by running two R5 cars as well. The weeks before the event were spent by teams anticipating the fun of a snow rally, tinged with worry that the weather would not let them down. The higher altitude stages on Friday in Norway promised to give more assurance of snow but as the rally approached it was the Saturday and Sunday stages in Sweden which increasingly created worries. The official weather forecasts promised a fall in temperatures at the time of the rally but when the crews arrived for pre event recce the persistent warmer weather and the consequent conditions of the stages led to alarm. The organisers had their plan which would be valid whether there was snow or not, so long as the temperature fell below zero and the tracks had time to be frozen before the rally. Just in time they did, but it was only just in time. In the end nine of the projected 21 stages were cancelled, the lost distance happily not sufficient to invoke the FIA's recently revived rule that full points would only be issued if half the projected stage distance was run.

The remaining stage each brought their challenge with widely varying relevance of running order. The re-run stages on the Friday afternoon suddenly gave a helping hand for later running crews which let Kris Meeke win a stage and Hayden Paddon two. Then Saturday stages did the same allowing Latvala, running further back because of his problems the day before, to win three stages. And during the day second placed on one stage Paddon clawed back a deficit of other a half minute to just 8.8 seconds, but that was as far as he could progress. Ogier accepted the challenge without complaint and launched a spectacular attack, taking by his own admission huge risks, and escaping serious damage when he went off the road where water was unexpectedly across the road. Over at Hyundai, Neuville had a differential failure on the Friday. Dani Sordo lost touch with the leading drivers when he punctured and Andreas Mikkelsen's hope for a podium result evaporated when he went off the road for a second time and lost more time. Saturday night ended with Ogier comfortably ahead of Paddon and equally spaced back with Mads Ostberg and then Mikkelsen. Ott Tanak, Dani Sordo and the Norwegian privateer Henning Solberg. Expectations of final day drama were reduced with the cancellation of the penultimate stage, leaving only the PowerStage to be run. And, guess what, Ogier was quickest here!
After the promising performance of Elfyn Evans with the Fiesta Evo E5 at Monte Carlo, Skoda entered their works team in WRC2 for the first time and it did not prove such an easy challenge for them. Both Pontus Tidemand and Esapekka Lappi were baulked by slower drivers on the Friday and Lappi spun into a ditch on the Friday afternoon, but as the rally progressed so he speeded up and went off the road on the Friday afternoon dropping from second to tenth in the category. Lappi set about recovering his position with a vengeance and on the final stage of the rally finally overtook private Fiesta driver Anders Grondal, who had lost time feeling ill, and climbed up to third behind Evans and Tidemand. For half the event privateer Fiesta driver Fredrik Ahlin challenged Evans for the lead of the category but it all went wrong when he went off the road on Saturday afternoon, by which time Tidemand had already found Evans in his sights. There were hopes that M-Sport's number two driver, Evyind Brynildsen would give Evans a lot of support but he was plagued with various technical problems but he was thrilled that he gained the publicity of making the longest jump at the famous Colin's Crest on the Saturday, at a record distance of 45 metres in the air. Much had been hoped for Citroen driver Emil Bergkvist driving an R5 for the first time. He reached as high as fifth WRC2 but dropped back again through illness, finally losing sixth place on the final stage to Skoda driver Ole Christian Veiby. Hubert Ptaszek was driving a Skoda for the first time but stopped with suspension damage while Sander Parn missed the Saturday stages because of engine problems, returning for the Sunday only to go off the road.

All through the rally one driver who never appeared on the radar of rally fans was the Finnish driver Teemu Suninen, who was driving a Skoda R5 but was not registered for WRC2 and consequently ran far behind down the field. In the RC2 class he was lying third for a long while but the on the final stage of the rally he overtook Pontus Tidemand and finished just in front, beating the two works Skoda drivers and suddenly finding himself in tenth positions overall. Suninen also spectacularly scored second fastest time overall on the Saturday evening superspecial at Karlstad.

There was only one competitor in the WRC3 category, and Michel Fabre made it to the finish to secure maximum points.