29 year old M-Sport driver Ott Tanak scored his first WRC win and became the fifth different WRC winner of the 2017 season in Sardinia. He beat Toyota driver Jari-Matti Latvala by 12 seconds ahead of Hyundai driver Thierry Neuville whose earlier challenge was thwarted by brake trouble. Star of the rally however must be Latvala's teammate Esapekka Lappi, on only his second drive in a World Rally Car, who finished fourth after scoring the greatest number of scratch stage times on the event, on one occasion with a broken gearbox! He then took top points on the power stage. Kris Meeke's Citroen led in the early stages but retired with his eighth crash of this season. Ogier continues to lead Neuville in the Drivers' while Tanak now moves up to third ahead of Latvala. In the Manufacturers' series M-Sport pull further in front of Hyundai with Toyota Gazoo third and then Citroen. 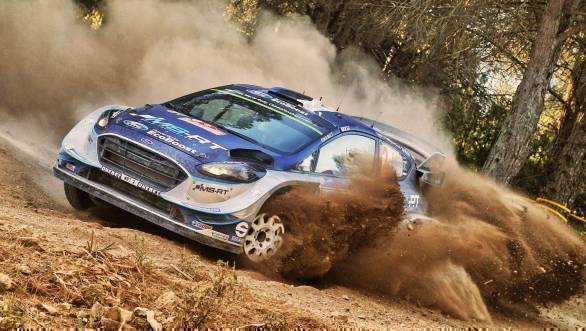 Ford, Hyundai and Toyota had an event which will bring them fond memories. Ford were happy because the win for Ott Tanak came after so many years of endeavour for the Estonian and was the team's third win of the season, though Sebastien Ogier had an unusually unconvincing event. Hyundai because they were lying one-two on the Friday evening and led for almost half the rally until Hayden Paddon, revitalised after a difficult start to the year, had driveshaft damage and retired. And Toyota because they finished with all their three drivers in the top six places and Latvala coming second, pressing Tanak hard, and Juho Hanninen sixth. Which leaves Citroen

Once again the rally was amazingly close on the first day. There were different leaders after each of the first three stages and different teams in the lead. The lead changed on all the first five stages and by the end of the rally five different drivers from all four teams had been leading and seven different drivers had won stages. The early stages saw second running Neuville fighting hard to overcome the disadvantage caused by his road running position, on Day 1 rising impressively from ninth place to second. On the Day 2 however he found the very dusty conditions off-putting and then had brake troubles and his challenge for the lead was over. In contrast to Neuville, Ogier's traditional refusal to be deterred by circumstances was missing and he lingered all rally in the middle of the top ten leader board. Latvala meanwhile was playing a successful game of patience and gradually moved up from eleventh until he was second at half distance. 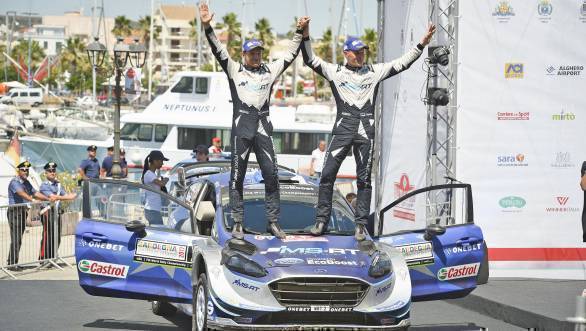 Tanak was M-Sport's saving grace making up for Ogier's lack lustre rally but apart from Tanak it was difficult to put M-Sport into perspective. Elfyn Evans' meeting with a roadside tree did not enhance his reputation, so he was relegated into test driving routine, ultimately being retired before the finish. Taking advantage of his start position, privateer 2017 Fiesta WRC driver Mads Ostberg rose up to third place on Day 1 before slipping down with tyre issues eventually finishing seventh. Then comes the story about Citroen. Words defy any appropriate analysis of the fortunes of their championship season, but it was interesting that the team should invite Andreas Mikkelsen to compete in their third car on this event, and see him finish their top driver. Kris Meeke had yet another crash while Craig Breen missed six stages when he experienced another suspension problem which caused the car to bottom heavily and damage the gearbox.

Sardinia is widely considered to be the roughest rally of the season, but apart from their fragile aerodynamical appendages the event showed that the new high-speed World Rally Cars are strong enough for the challenge. Predictably this was the quickest Sardinia Rally. Now the challenge of the world championship moves round to the faster gravel and the asphalt events in the second half of the season.

Three drivers were entered in the WRC Trophy with older version World Rally Cars: Yazeed Al Rajhi had a smooth event to win ahead of Jean-Michel Raoux while third was Martin Prokop. Nine cars were entered in the WRC2 before Mikkelsen was allowed to change from his Fabia R5 to a World Rally Car. These included the works Skoda of Jan Kopecky and the Printsport team Skoda of Ole Christian Veiby. Kopecky is still eligible for the title after a recent FIA championship rule change which modifies the rule forcing WRC2 candidates to enter three specific rounds of the series. Fabio Andolfi's Hyundai and Pierre Louis Loubet both went off. Behind Veiby was the Japanese driver Takamoto Katsuta, Lukasz Pieneazek who was slowed by power steering failure and Yohan Rossel who held fourth place despite two punctures.

Sardinia counted as the second round of the Junior WRC and its first gravel round, and nine of the ten drivers who competed in Corsica were again entered with three non-Fiesta drivers also competing in WRC3. Francisco Name crashed his WRC3 Citroen DS3 R3T too badly in Shakedown to be allowed to start the event. He had the embarrassment of having to appear at the FIA press conference to explain his misdeed. "We were pushing a little bit and testing how was the grip, then I braked in one tight corner and rolled". In WRC3 Jakub Brzezinski initially led, while in the Junior category it was Nils Solans, then in both series it was Terry Folb with from stage three to the finish Nils Solans was on his own ahead of Nicolas Ciamin. Robert Duggan hit a rock and damaged the car but continued as a Rally2 driver and went on to finish. Miko Niinemae hit a tree and had to withdraw with back injury while Dillon van Way damaged the sump of the engine and also restarted.