The fight between the two world rally champion Sebastiens continued in Corsica, on the second out of three planned occasions in 2018. This time Seb the Younger (Ogier) controlled the event in his Fiesta from start to finish while the Citroen driver Seb the older (Loeb) suffered one of three top driver off-road mistakes. Like his teammate Kris Meeke (9th), Loeb (14th) reached the finish but the car of the other high profile offender, the Toyota of Jari-Matti Latvala, was too damaged to continue. The clean, dry asphalt conditions saw many drivers struggling, the Hyundais continued their bad understeering habits while the inconsistent but improving Toyotas of Ott Tanak and a much improved Esapekka Lappi were fast when conditions allowed. Regarding the M-Sport Ford, the winner said "Its very good news to see that we progressed, the car is faster than last year, it was good fun". Skoda's Jan Kopecky won WRC2 and Jean-Baptiste Franceschi won the Junior WRC3 category. R-GT was won by the Abarth 124 of Raphael Astier, over five minutes ahead of similar car of Andrea Nucita. 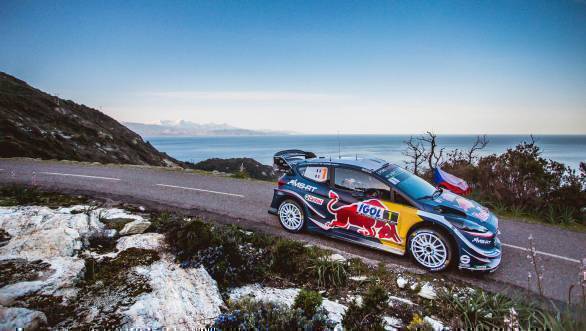 Third victory of the 2018 season of WRC for Sebastien Ogier

The Tour de Corse is one of the truly classic rallies in the WRC, an absolutely perfect example of asphalt rallying. This year it was run in warm, dry conditions with none of the uncertain weather conditions which often create a dramatic special drama. All four teams had their technical challenges but the only team which could not satisfactorily match the speed of their rivals was Hyundai. Alone of the teams Hyundai's drivers scored no scratch times and it took every ounce of Thierry Neuville's efforts to finish on the podium. Between Ott Tanak and Esapekka Lappi, Toyota drivers scored seven best stage times, with Lappi being the fastest driver of the rally, against three for M-Sport - all scored during Ogier's initial opening attack - and three for Citroen, all by Loeb. Citroen entered official cars in WRC and WRC2, starting off with high hopes  until Sebastien Loeb went off the road at the start of stage 2 and on Friday afternoon the new R5 car of Stephane Lefebvre had brake failure, having an impact which wrecked the suspension. Then on the final stage on Saturday, Kris Meeke had no sooner ascended into second place, behind Sebastien Ogier, when he went flying off the road and the car needed overnight repairs before continuing. Meeke however was able to carry on, still "in the points". Team Director Pierre Budar said he had not expected such an unexpectedly disastrous Tour de Corse. Another competitive C3 R5 car was driven by the French champion Yoann Bonato finished second in the WRC2 category who successfully avoided brake troubles.

As the rally got under way, there were looks of expectation at M-Sport as Ogier looked happier all the time. Little, but effective, improvements were seen in the car which the driver noticed, so much so that after the first two stages he was over twenty seconds in the lead. For a while Neuville held on to a distant second place, Ogier had it all under control but through Saturday Neuville had handling problems and came under attack from Meeke. The Toyotas meanwhile had started the rally uncertainly but worked hard at improving their handling. By half distance both Tanak and Lappi had joined in the race for the podium. Just as it all looked really good for Toyota Lappi punctured when he slid on to a curb, which Neuville had done at the same place but without puncturing. Neuville held hopes of eventually returning to a second place and started the PowerStage 13.3 seconds behind Tanak but any hopes evaporated when the engine developed a misfire. Neuville made it to the finish, securing his podium result but was far from pleased. 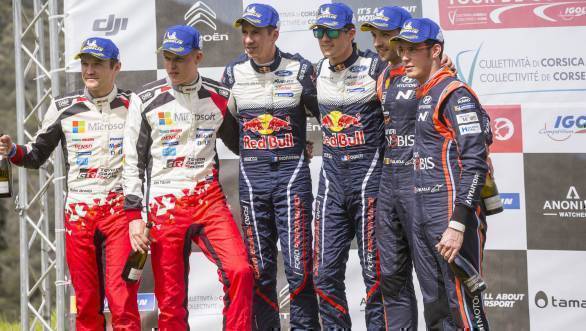 Back at M-Sport, Elfyn Evans had started the week with the news that his regular codriver Daniel Barrett was still not fully recovered and he needed a new codriver. On one day's notice fellow Welshman Phil Mills, 2003 World Champion Co-driver and former Corsica winner was told he wasn't going to Corsica this time to help make route notes for Evans, he was going to compete. He had not read a pacenote in anger for eight years  It was a delightful relief for Evans to finish a steady fifth overall, after M-Sport had lost their third driver, the Corsican expert Bryana Bouffier who retired with engine trouble. Although Hyundai finished the rally with Neuville and Dani Sordo in the top four, M-Sport were happy to reduce Hyundai's championship lead to four points. Ogier meanwhile had increased his Drivers' championship lead to 17 points. 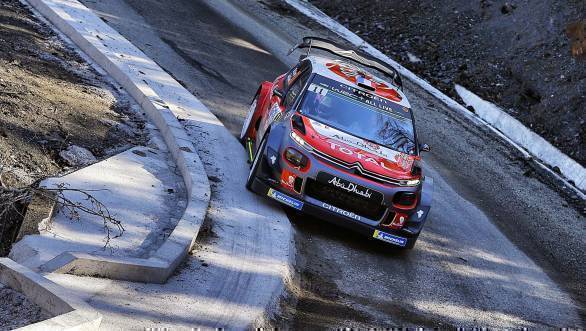 Sebastien Loeb had a tough weekend at Corsica, going off the road at the start of Stage 2

The support championship competitors had a difficult time when many of them suffered from two unforeseen incidents, firstly when the official results and tracking service broke down causing a long delay in the running of the event on the Saturday and then the second was another delay when the WRC2 driver Nicolas Ciamin crashed his Hyundai and blocked the route. The arrival of the newly homologated Citroen C3 in R5 created a lot of interest but their official driver Stephane Lefebvre suffered brake problems which he explained caused him to go off the road and smashed his suspension on the Saturday. All through the rally Jan Kopecky was unchallenged and had been heading Skoda teammate Ole Christian Veiby when Veiby lost time with a jammed gearbox on the Saturday evening letting Bonato up to second and Fabio Andolfi to third. The two Japanese WRC2 trainee drivers had an adventurous week. Takamoto Katsuta crashed in pre-event testing then again during the rally. His teammate Hiroki Arai had his accident on the rally but managed to finish. Kopecky now led the series by seven points from Skoda teammate Pontus Tidemand. In WRC3 the Junior drivers were completely dominant. Terry Folb leading but Jean-Baptiste Franceschi overtook midway on Saturday and went ahead. Remarkably all fourteen Junior drivers completed each of the three legs of the rally, the only drama was when New Zealander David Holder lost a lot of time off the road, waiting for rescue by spectators. Jean-Baptiste Franceschi was now equal leader with Dennis Radstrom in WRC3 and led the Junior series by 7 points from Emil Bergkvist.