Ott Tanak produced an inspirational turn of speed on the final Power Stage of Rally of Spain, fastest by 3.635 seconds, wresting second place from Dani Sordo by four tenths of a second, allowing him to become the first Estonian to become World Rally Champion. The first time for 15 years that it was not a Frenchman called "Sebastien" that had achieved the prize. 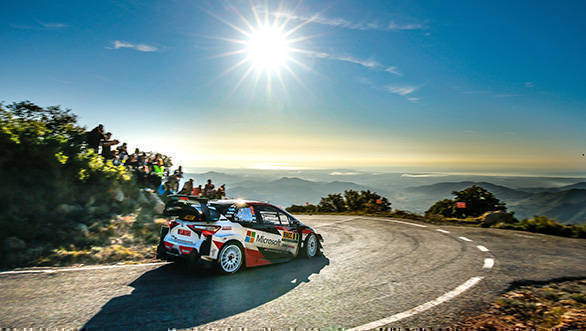 Tanak kept out of trouble, driving faultlessly. "My mother said to me yesterday evening that you know if Ott wants something then he can make it happen. I just had to make it happen." For Toyota it was 25 years since one of their drivers had achieved this feat, with Didier Auriol in 1994. Thierry Neuville won the rally doing all within his power to keep his slim chances of the title alive but ensuring the battle for the Manufacturers' title goes through to the final round in Australia between Hyundai (leading by 18 points) and Toyota. Hyundai had held 1-2-3 after seven stages but eventually Dani Sordo was unable to resist Tanak's final charge and he finished third ahead of teammate Sebastien Loeb. The third Drivers' title contender, Sebastien Ogier's hopes were dashed after losing considerable time on the first day eventually finishing eighth. In the RC2 class Citroen C3s in the hands of Mads Ostberg and Eric Camilli won the WRC2 Pro and the WRC2 amateur categories, both finishing in the top ten. Skoda Motorsport secured the WRC2 Pro Manufacturers' title but the WRC2 Amateur title looks like being settled in Australia, between current leader Pierre-Louis Loubet (fourth) and Benito Guerra (retired). 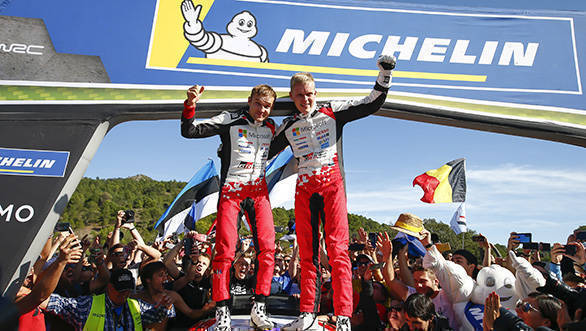 The focus of the rally remained the three way battle for the Drivers' championship between Tanak-Ogier-Neuville. Tanak, leading the championship, was first on the road on Friday ahead of his rivals. The gravel stages had some dampness in the morning and road cleaning was expected to benefit later runners. Tanak "that's just how it is, we have to do it." Ogier went straight into the lead 0.7 seconds ahead of Dani Sordo (ninth on the road) while Neuville struggled with poor visibility from mud on his windscreen. There was drama on the second stage when Ogier suffered hydraulic trouble and he lost time. Neuville was fastest, taking the lead ahead of teammate Sordo, Hyundais 1-2. Ogier was down in 15th position, 43 seconds behind Neuville. At the side of the road on the following road section Ogier and codriver Julien Ingrassia worked on their C3 before tackling La Fatarella-Vilalba. The longest stage of the rally, a challenge for both drivers and their cars with constant changes between the mixed surfaces and the undulating roads, where it was hard to find a rhythm. Ogier fought through the 38km stage, but the hydraulic problem had not been cured, he lost nearly another three minutes to the stage winner, now down to 28th. Loeb's decision to take all hard tyres paid off, was fastest and jumped from ninth to sixth, Sordo took the lead and Neuville was second ahead of Tanak. Three different winners in three stages, and none yet for Tanak who was biding his time. 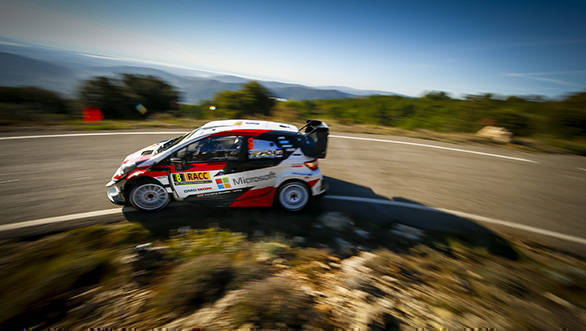 Tanak's running position increased his disadvantage during the second run of Friday's gravel stages. Ogier's car had been restored to full health but his championship hopes for 2019 were gone. The championship battle was not exclusively about the Drivers' title. Hyundai and Toyota both needed to maximise their points scores for the Manufacturers' title and there was the spectar that tactics might come into play before the rally finished. The Hyundais won the afternoon stages, Loeb taking the rally lead after stage 6. Was the 2018 winner on course for another famous victory? The teams had 75 minutes to change the cars set-up from gravel to asphalt at the end of Friday. On Saturday Neuville immediately retook the lead, winning the first two stages. Then it seemed like the sleeping giant awoke, Tanak was fastest on the long asphalt stage and the following three stages. Neuville won the Salou spectator stage and while the gap between him and Tanak had remained almost the same as at the start of the day, 24.6 seconds, the Estonian was up to third. Neuville's teammates were under no illusions that their job on the final day was to protect him from Tanak improving that position further.

Neuville did what he could on the final day although a brake problem on the second stage meant he lost a little time. Sordo fought hard, fastest on two of the four stages increasing his second place lead over Tanak slightly going into the Power Stage. Tanak however was not taking any risks, not wanting to throw away his chance of the title. In the Power Stage he attacked, giving it everything to win the stage by 3.6 seconds and took second place. Thierry Neuville won the rally, Ott Tanak had secured the World Drivers' title, Toyota Team Principal Tommi Makinen, "You could see what he did on the Power Stage. Finally, when he needed something, it was just what he needed to do to take the title. He was absolutely amazing." 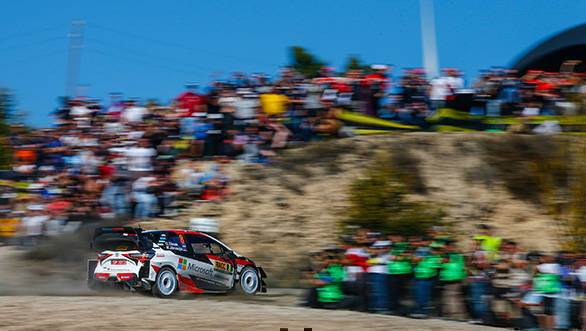 Hyundai's strategy of partnering Neuville with Sebastien Loeb and Dani Sordo to ensure a high scoring result paid off, their drivers each winning stages and leading the rally as well as winning it. Sordo, "To lose by four-tenths is not nice. We pushed hard and enjoyed. We thought we had pushed hard in the last stage, but it was not enough. But we are on the podium and we have points for the Manufacturers', so it is not so bad. The team goes to Australia with an 18 points lead in the Manufacturers' series over Toyota. Team Principal of the winning Hyundai team, Andrea Adamo, "Our car has shown its strength on gravel and tarmac this weekend, and we are now ready for the final fight. We've taken an important result today, but the final calculations will only be done after the Power Stage in Australia." 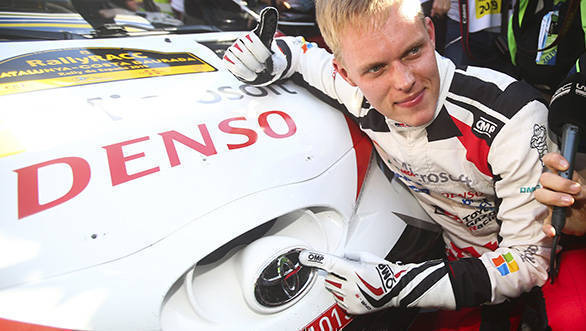 In Toyota's challenge for the Manufacturers' title, Tanak's teammates had mixed experiences on the rally. Jari-Matti Latvala finished 5th despite lacking confidence and being ill at ease in his Yaris while Kris Meeke struggled with the car's setup and then missed stages after impacting a crash barrier on Day 2. Citroen were committed despite the difficulties experienced by Ogier followed by the retirement of Esapekka Lappi on stage 5. The M-Sport team also ran only two cars and had a disappointing event despite glimpses of what might have been when Elfyn Evans 2.8 seconds faster than Ogier on the Power Stage and when Teemu Suninen scored a second fastest time on the gravel.

In the R5 support championships it was a Citroen 1-2 with Mads Ostberg winning the WRC2 Pro and Eric Camilli the WRC2 Amateur categories in their C3s. Skoda were intent on winning the Makes title in the Pro series, their newly crowned Drivers' champion Kalle Rovanpera lying third in the class then lost a wheel on the Salou town stage so finished behind his teammate Jan Kopecky and Skoda won the title. In WRC2 championship leader Pierre-Louis Loubet led the category on the gravel stages after initial leader Nil Solans suffered a double puncture. Once on the asphalt however Loubet lost time, finishing fifth behind Camilli, Lindholm, Kajetanowicz and Veiby. His only remaining title rival however is Benito Guerra, both drivers entered in Australia where the title will be decided.