Sebastien Ogier's tenacious win in Turkey kept alive his world championship hopes, thanks to problems for his WRC rivals Ott Tanak, missing stages because of electronic failure, and Thierry Neuville, who lost time off the road. It was a demonstration of the reliability in rough conditions of the Citroen C3 WRC even though their pace was disappointing. Their cars finished first and second. There was disappointment for Toyota whose top driver was sixth placed Jari-Matti Latvala. Notable was the consistency of Ogier's teammate Esapekka Lappi who led for half the event. M-Sport were encouraged by Teemu Suninen's fourth place and also by Gus Greensmith, whose battered Fiesta was the top R5 car. Tanak still leads the World Drivers' championship,17 points ahead of Ogier; Hyundai heads Toyota in the World Manufacturers' series by 19 points. This was Ogier's 47th world rally win. 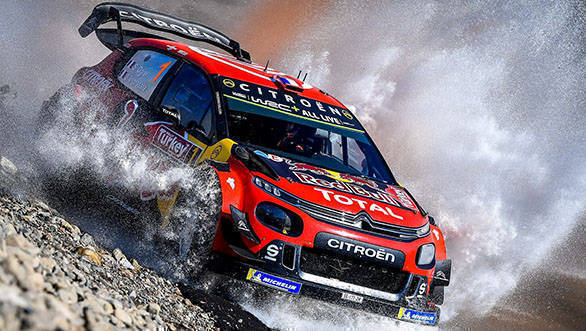 Turkey was the eleventh of 14 rounds in the 2019 World Rally Championship which is becoming an extended battle between the Toyota and Hyundai teams, with Citroen and M-Sport as supporting competitors. To an even greater degree than in the previous rally in Germany, fortunes were largely dictated by punctures, with only two of the top team drivers not being reported to have had flat tyres. There was a special tyre challenge, with heavy rain falling on the Friday afternoon and turning the tracks into skating arenas. The preferred tyre compound was hard, ideal for resilience against impact and highly abrasive surfaces  until it rained! While the softer compound "Medium" tyres offered more grip, drivers often carried both hard and softer tyres, weighing up the options whether to carry two spare wheels to give wider tyre choice options.

Ott Tanak started off with the handicap of running first car on the road and later running drivers, like Jari-Matti Latvala and Esapekka Lappi, had the benefit of cleaner road surfaces. Sebastien Ogier was the first to suffer from a puncture on the opening stage on Friday, Kris Meeke thought he had one as well but discovered the tyre pressure sensor was faulty. On the same stage Dani Sordo punctured and then so did M-Sport's guest driver Pontus Tidemand. On the long second stage of the day Latvala the rally leader eased his pace unnecessarily and this let Lappi go into the lead. The pace between drivers always was close  until they suffered a puncture! 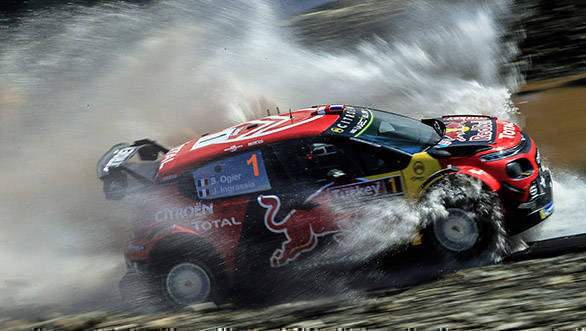 Then came the rain. Andreas Mikkelsen said the tracks were suddenly like ice, others said it was like glass. During the afternoon Ogier crept up to second place. It was fully dry on as the rally headed west of Marmaris on the Saturday where there were unexpected patches of quite dense dust. This caught out Thierry Neuville who went off the road and lost four minutes. "I could not see even one metre ahead of the car." Teemu Suninen (M-Sport's main driver in the continued absence of Elfyn Evans) was up to third but Mikkelsen was now charging on behind him. At this point the battles for positions at the front of the rally began to settle down and the stages along the coast were picturesque and less rough. During the morning Ogier felt his tyres got progressive balder (both his front tyres had no tread left) and he slipped a little back behind Lappi but usually there were only a handful of seconds between them. On Saturday afternoon he passed Lappi into the lead.

The focus of attention on the Sunday was the PowerStage. Both Tanak and Neuville saw the PowerStage as their only chance to gain points from the event and Tanak had a secret plan. He jettisoned the spare wheel and as many unnecessary contents from the car that would keep the car within the minimum weight limits, cruised through the first three stages of the Sunday to save his tyres and went flat out on the final stage. "I have nothing to lose and five possible points to gain". Which he did. In the end Mikkelsen's podium position was a blessing for Hyundai as was Suninen's fourth place. The focus now was on the unhappiness of Toyota after Tanak's trouble. Latvala was struggling with the handling of his Yaris: "the car is just not turning-in unless I am far too aggressive. I have to force myself to drive like Ari Vatanen". Which is no good if reducing tyre wear is the challenge. At the end he blamed himself for choosing an unsatisfactory setup in testing. Seventh placed Meeke's hopes evaporated when he had a spin. "I just didn't have the pace on this event. Everything has been going backwards these days!" 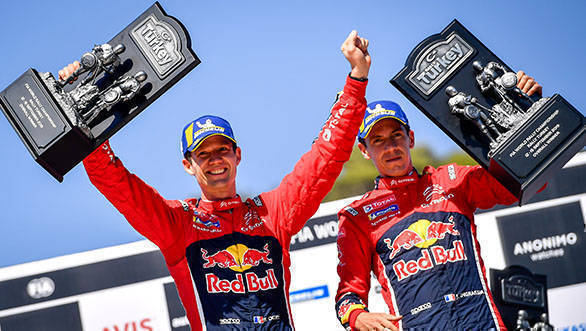 Ogier said afterwards: "This rally was our only chance to try to get back into the championship. We knew that anything could happen here, its a super rough rally, some places are a bit of a lottery. But we all know we need to keep working. A lot of things to be improved still but I'm very happy to give them this victory and its a good boost for the rest of the season". Thierry Neuville: "I gave it everything. To be honest I couldn't do more. I drive very hard but okay its like it is. Another difficult weekend but three more rallies to go so let's see what happens there". Latvala was the top Toyota finisher. "Its been a tough weekend but the main thing is that we finished the race, and we didn't stop for issues. The car was strong but to this weekend we're missing a bit of pace" Andreas Mikkelsen: "Its been a good rally for us. Try and stay away from drama and stay away from trouble and we managed that quite well".

In the R5 cars Gus Greensmith survived a dramatic crash in his Fiesta Mark II on the penultimate stage and at the same time Kajetan Kajetanowicz, who had led the R5 cars since Friday morning, had a driveshaft fail. Kalle Rovanpera had a feast of punctures and he also rolled on the first day, so Greensmith found himself the top driver in front of Jan Kopecky who had fallen behind with a puncture on the Friday. Kajetanowicz won the WRC2 Amateur category in an old Skoda. Rovanpera will win the WRC2 Pro title if he finishes in the top two on the next rally, Wales Rally GB, in three week's time. M-Sport's delight was dented when the wishbones on Greensmith's car were found to be 20 g too heavy and were immediately fined 5000 euros.