German component manufacturer, ZF, unveiled a concept car that represents the future of driver assistant technologies. It could even find its way into the passenger cars of tomorrow. The ZF SUV (Smart Urban Vehicle, mind you, not Sport Utility Vehicle) is a game-changing concept in the field of driver assistance. It was built entirely in-house using a standard hatchback as a base.

The SUV is powered by a traction battery which drives a semi-independent rear suspension called eTB (electric Twist Beam) which propels the wheels using a compact drive unit located on both rear wheels. Each drive unit produces 40kW of power, 1,400Nm of axle torque and a maximum of 21,000rpm, giving the car a claimed top speed of 150kmph. Another remarkable feat ZF has accomplished is giving the SUV a turning diameter of less than seven meters through 75 degree steering angles. This in turn is supported by a torque vectoring system in the rear wheels that distributes power to each wheel individually and hence improves manoeuvrability especially in those tight spots. 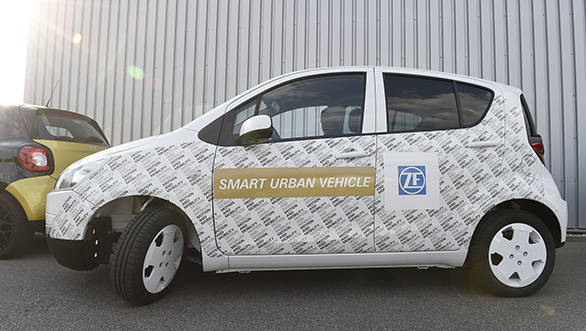 One of the driver assistance systems offered on this car is a feature called Smart Parking Assist. The system not only recognises suitable parking spaces, but can also park the car itself using 12 ultrasound sensors and two infrared sensors that are distributed around the car. The driver can communicate with the car throughout the process using a smart device such as a smart watch.

However, one of the most interesting features it supports is the PreVision Cloud Assist. This system takes into account geometric data, information on legal speed limits and also stores data in the cloud regarding current driving speed, vehicle position, along with lateral and longitudinal acceleration. If the driver uses the same route regularly, it analyses it and calculates the optimum speed for approaching curves and cuts back on the torque early enough to ensure that mechanical braking is not required. All these features not only provide safety but also protect the car's braking system and battery. This system is linked to an organic LED display unit in the steering wheel's rim which informs the driver about the drop or increase in torque around bends. 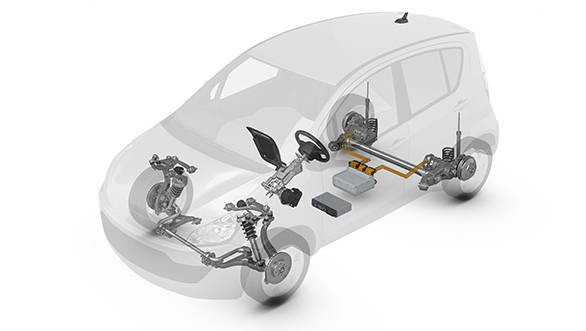 The SUV also features a hands-on detection (HOD) system that uses a capacitive system. It covers the whole steering wheel and detects whether or not the driver is holding the wheel. The system then converts this information into digital signals and sends it to the vehicle using the Local Interconnect Network (LIN) and depending on the circumstances, it alerts the driver or initiates appropriate safety measures.

While all this technology might not thrill all the motoring enthusiasts that prefer to be in control of the car themselves, one has to remember that this technology is not aimed at them. It is developed for regular people driving in crowded cities with dwindling parking spaces. For those tight stretches and corners, this is the kind of technology that will add to the 'pros' checklist when making a buying decision.

Big in the City: The ZF Smart Urban Vehicle