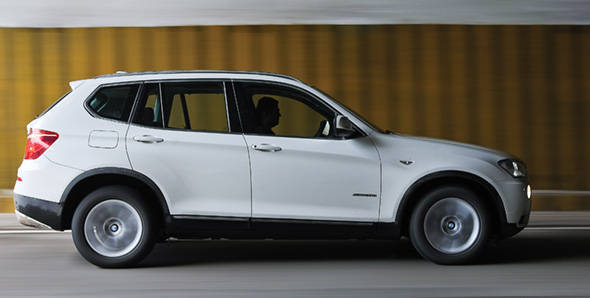 BMW is all set to take on the Audi Q5 in India with their new X3, which is already being assembled in India.The X3 slots in between the X1 and X5 all over the world, but in India, that particular price band is significantly larger because BMW assembles the X1 - low duties - and imports the X5 - eye watering duties. The earlier model of the X3 was on sale in the country, but it was at the end of its product life and felt it, with its natural German arch-enemies offering all the benefits of more current technology, equipment, packaging and a generally superior driving experience. Abroad, they did sell well over 600,000 units, so it wasn't completely devoid of virtues.

But that X3 was never as effortlessly a part of the BMW family as everyone would have liked and that is what makes the second generation X3 such a big deal. This one has to do quite a few things. It has to take on the excellent Audi Q5 (plus the Land Rover Freelander and the Volvo XC60) in India, a market where Ingolstadt has become labelled as the SUV maker. How will it fare? Let's find out.

When the X1 first came out, it was a larger car than many anticipated. It was so close in size to the then current X3, that the replacement for the latter had to be larger. Further, the X5 also grew during its sole refresh and that created the space the X3 now occupies. The new X3 is thus, 83mm longer and 22mm wider and 15mm longer in wheelbase, which means a spacious cabin as well as roughly the same size as the original X5 was.

Visually, the car looks much more the BMW SUV than the previous one ever did with the car taking up the family look and looking very much like a shrunk X5/grown X1. A strong definition line appears aft of the front wheel arch and tapers off toward the tail lamps, allowing the eye to settle momentarily along the way on the convex and concave panels that make up the side body. From the rear, it looks practically like a full-sized SUV while the front, with square-edged headlamps and extremely muscular bumpers looks attractively neat and brawny.

The interiors are now firmly within the grip of the family ethos, which is a good or bad thing depending on how you look at it. The old hard plastics have been given pink slips while a slew of soft-touch plastics and the usual BMW cabin design has been drafted in. Which means it looks and feels spacious, high quality and intensely familiar. From the iDrive menus to the horizontal (programmable) buttons that span the centre console in a row, the X3 is like any other current BMW. Personally, I would have liked more distinction, but evidently BMW customers don't, and that's okay with me. Then again, other ODers note that the meters are more the like 5 Series while the controls and the central console is more like the 3 Series. I guess I've grown insensitive to detail in typical BMW interiors so I didn't even know they were not identical in the first place.

The older X3 was heavily criticised for its lack of rear room and that concern has been comprehensively addressed. There is good knee room, good head room and you could seat three pretty decently too. The front seats are great as usual, it goes without saying. However, when we measured the interiors, some interesting things came out. First, the Audi Q5 has the better front half of the cabin, offering marginally better space in almost every dimension. However, thanks to the bigger size and near-ridiculous adjustability fore and aft of the front seats, the BMW soundly thumps the Audi in rear seat space terms, offering more knee as well as leg room. In fact, shoulder room is identical, but the way the BMW positions the rear seats means that the C-pillar fouls with our measuring standard, but passengers will actually get a little bit more shoulder room, once more, allowing the BMW to inch head of the Q5 on this count.

On test today is the entry level engine, the xDrive20d, with its new 8-speed automatic transmission. Visually, this is a simpler looking car with the 30d getting a more aggressive looking set of wheels and bumpers.

The 20d has a 1995cc four-cylinder common rail turbodiesel good for 184PS (at 4000rpm), and 380Nm of peak torque between 1750 and 2750rpm. The new power peak is a rise of 7PS over the previous X3. The engine also uses what BMW calls a centrifugal-force pendulum which increases the damping capacity of the twin-mass flywheel, specially at low revs. This, says BMW, allows the transmission to select a higher gear much earlier than usual which has mechanical, economy as well as refinement advantages.

This engine proved quite good for the speeds we were doing even if it wasn't a performance revelation. The car is actually lighter than the previous generation car and performance is enthusiastic, allowing the X3 to pull easy overtakes and hold highway speeds comfortably. Refinement levels are excellent and aside from some wind noise at highway speeds, you won't complain. This generation has standard start-stop which improves efficiency.  I was happy to note that it is quick to become second nature and largely non-intrusive once you get a hang of it.

The eight-speed automatic is, as expected, very good, shifting quickly and well, and also helping lower CO2 emissions by a tiny bit. This is the same well-received transmission that we have seen in the 7- and 5-Series cars so its virtues are not unexpected. Overall, the X3 is pretty quick, offering a 9.42 second run to 100kmph despite wet conditions. The X3 crosses the quarter mile in 16.69s while roll-on acceleration is good too, taking 8.39s to go from 40 to 100kmph. The X3's top speed is electronically limited to 210kmph.

It is also a pretty frugal car. On our test runs, it returned 10.6 kmpl in the city and a very welcome 18.3kmpl on the highway, which means overall economy is 14.02kmpl which is excellent for a car this large. BMW say the ARAI mileage is 16.09kmpl, well ahead of its peers.

This BMW X3 is closely related to the 3-Series, being based on the Touring version. It features monocoque construction, a longitudinally mounted engine and all-round independent suspension and the X moniker, obviously, means four-wheel drive. BMW endows the car with an electronically controlled multi-plate clutch that can distribute torque between front and rear axles.

The new X3 also enjoys a completely new suspension layout. It features a double-joint spring-strut axle up front, matched to a five-link rear. Track is a substantial 92mm wider than before as befits a significantly larger car, and the manufacturer claims it also has a role to play in the car's dynamic abilities. The 20d comes with 17-inch alloys while the 30d is set to arrive bearing 18-inch alloys. The car also has dynamic stability control and it includes a hill descent function as well.

And it computes. The area where everyone seems to note the biggest improvement without any dissonance is the ride quality. Evidently, the first generation X3 had suspension that felt like the wheels were mounted directly to the passenger cabin. The new one gets effective adaptive suspension as standard, which allows you to select Comfort, Sport and Sport+ modes that alter the car to your needs in terms of damping, steering response, gearshift maps as well as throttle response.

In Comfort mode, the X3 felt just right. It felt supple, well-damped and still adept at cornering the way we expect all BMWs to today. But in a welcome departure from the older SUV, there is a fair amount of softness and some body roll in the present generation X3. In Sport and Sport+, the car feels noticeably stiffer, allows more road feedback to come to you via seat of pants and steering wheel, corners flatter with body roll diminished further and the steering feeling a little bit more direct, and most crucially, it never became harsh or jittery. Of course, the car has a 50:50 weight distribution so good handling is to be expected.

BMW betters the experience by ensuring that the stability control sends more torque to the rear wheels in steady-state cornering to preserve the handling feel the brand's cars are famous for. That said, the electric power steering employed is one of the best examples of the technology we've experienced so far weighing up almost instantly. But hey, allow me to point out that it's not a M1 or a track refugee. And for what it's worth, I do think it corners rather well for what it is.

The safety equipment list is comprehensive as usual. Apart from the large crumple zones and other passive safety features, there are front and side curtain head airbags, belt force limiters, crash-active head rests and Isofix child seat mounts in the rear.