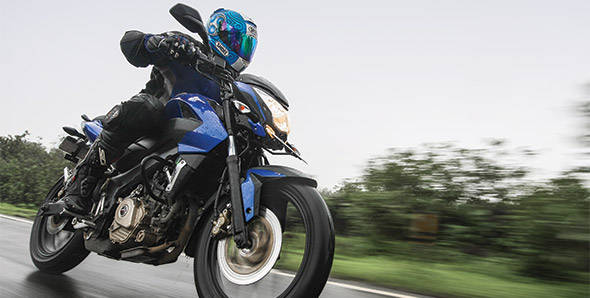 Bajaj prides itself as a hot-bed of innovative engineering and design. And their newer models make it increasingly hard to disagree. A subtle undertone to this is the fact that it is an Indian company, the chief of operations as well as the head of R&D and all other departments are Indian and while Bajaj - and everyone else - use international consultants and firms to move things along, it's a properly Indian engineering and maufacturing effort.

And their track record is excellent. They've held the Japanese off for a decade, staying behind Hero/Hero Honda doggedly while the other Japanese companies have repeatedly announced intentions to climb higher up the market share order and so far, not made much headway. And let us not forget Bajaj's latest crown - their claim to being the most profitable bike manufacturer in the world. On the other hand, the Pulsar brand has proved extraordinarily resilient. It started as a motorcycle for the Indian enthusiast and has since become the staple of the 150cc 'sporty' commuter class, a position it hasn't relinquished since it earned it roughly eleven years ago.

Now we have the first all-new Pulsar since that very first one. I loved the first 180, which was a twitchy, angry-ish motorcycle that Bajaj had to calm down in the second generation on the back of the market's desire for a less quicksilver machine. Then I also found a soft spot for the 200 which sat well on its long wheelbase, wore its tank extensions smartly but most importantly, the engine and chassis were both in balance, it felt angry but not out of control, it cornered well but didn't wallow, and in my eyes, that's where that Pulsar platform peaked. It was unfortunate that a lack of demand - the 200 was sandwiched between the well-reputed 180 and the heavily-promoted flagship 220 - gave it a short span in the market. So in this motorcycle, 180-style urgency would be awesome, on the other hand, that wonderful balance of the old 200 would reflect how far Indian engineering has come and form a great place to open the innings on the second all-new Pulsar in history.

The bulging tank of the first Pulsar gave it a full-bodied distinction and appeal. The CBZ may have looked more contemporary with its sharp edged knee recesses, but the Pulsar was drawing its own line in the sand. But in the intervening decade that line became a barrier. The tank became such a distinctive identity element that it began to hamstring designers in terms of the Pulsar's stylistic evolution. The design moved on but always tip-toeing around the tank lest hard-won identity be squandered.

With an all-new platform comes the opportunity to wield these distinctive style elements afresh. There is a legacy now that the designers have to pay homage to, but the freedom is vastly greater. Bajaj has responded to the challenge and the opportunity very well, I'd say. The design is very busy and focuses visual mass in the tank region as is the current trend. There's a forest of cuts, slashes, planes and angles in there, all topped by a tank top whose plastic surface strongly reminds you of the original Pulsar tank. This is clever design and using a plastic tank cover enables complex shapes all of which create a striking motorcycle. That said, I'm not a fan and this motorcycle will be recognised easily as a Pulsar but not as a design classic, I think.

The head lamp design is also very distinct although the triangular shape of the beam does bring to mind the CB1000R naked. The beard - two slashes that make the daytime running lamps - look neat though the tilted front number plate looks like a hack next to the well finished plastic bikini fairing. In contrast, the tail lamp area looks under defined. The subtle change in the lines is overshadowed by the tail light which is still two strakes of LEDs, but not parallel as before, but diverging downwards. Which looks like the Pulsar 135 in traffic from behind.

But all the plastic bits sit well together, finish levels are very good and the bike feels pretty solidly put together. The sole issue we had was that the single-sided moulded plastic over a metal frame splatter guard fell off during the test and I've met another Pulsar headed from showroom to home where the guard had already come seriously loose. The issue is compounded by the fact that the screws Bajaj employ don't use either flat-head or Phillips-head screws which means an enroute fix is very hard to accomplish.

The story of this Pulsar is linked inextricably to the Duke 200 for the simplest of reasons. Bajaj was developing the two together and while learnings and ideas naturally intermingled - the subtle end of the overlap - Bajaj chose to use the same engine bottom-end for both. The gear ratios are exactly the same with a minor difference in the primary drive ratio and a more significant difference in the final drive.

At the top of the liquid-cooled, 4-valve SOHC head are now three spark plugs. Bajaj say they earn their keep at low and mid revs where they produce a significant bump in economy under part throttle conditions. Our economy tests showed that the P200 is a reasonably fuel efficient motorcycle, returning 30.2kmpl in Mumbai's traffic while on the highway we got 40.3kmpl exactly. These are decent numbers.

On the performance front, we were expecting the P200 to be quick. But as the bike rolled into our garage for this test, the monsoon finally opened up and we faced the brunt of its fury during this test. So all of the numbers were recorded in the wet. Which means actual dry weather performance will have to be reevaluated once the rains abate. Still, the P200 manages 60kmph in 4.33s, 100kmph in 11.67s and the quarter mile takes 18.14s at which point it's going 112.83kmph. We had to abandon our top speed runs at 119.03kmph as the Eurogrip tyres began to produce that greasy sensation in the soppy wet conditions that means a lack of grip is approaching. But already these numbers suggest that the Bajaj Pulsar 220's claim to being the World's Fastest Indian is no longer valid.

Numbers aside, I quite like the feel of this engine. In traffic, it has a sense of quietness and smoothness that I haven't felt on any Pulsar yet. When you ride it hard, the engine gains a very mechanical, thrashy voice near redline that isn't quite as welcome. But between the torque and the gearing, the P200 can be ridden very quickly, very quietly through traffic with remarkably little effort. Out on the highway, it is nice to cruise at up to 90kmph after which the engine noises begin to make themselves heard. You can push along at 120kmph if you like, but the engine gets quite loud. The gearbox is sweet and light to operate as usual and unlike the Duke, I had very little trouble finding neutral on the Pulsar.

Overall, I thoroughly enjoyed the motorcycle and I think enthusiasts and commuters alike will find much to like in the motorcycle.

The Pulsar 200 chassis shares still fewer ideas, bits and fundamental geometries with the Duke 200. The clue lies in the way it looks. It feels bulky to straddle and the slightly thicker handlebar grips - of a very nice texture - reinforces your impression of this being a large motorcycle. The ride quality plays this game too. The motorcycle tends to pitch less than you expect and come off feeling stiffly damped. But hit a really rough patch and you discover that the P200 is a supple motorcycle, able to absorb roads with chronic acne impressively well.

It isn't a plushfest either. And that's the surprise. When you tip this apparently bulky package into a corner, you get the clearest sign of how far Bajaj's understanding of chassis engineering has come. It wears a massive twin-spar frame as well as an almost oversized rectangular section swingarm of startling length. And it makes all of the bits work. The Pulsar leans over with an effortlessness that suggests it's 20-25kg lighter than your initial impression. As before, it is a stable motorcycle but it's lost the long and inertial feeling of the old ones. To the point where three corners later the enthusiast in you will want to swap the durability oriented (translation - good for commuting) Eurogrips for something more suited to your mood.

Brakes are very good too and initial bite is softer than you expect which make them friendly but it is backed up with enough power as you continue to squeeze the lever. I also liked the fact that the rear disc - not that I used it much - also allows a fair amount of travel so modulating pressure is easy.

The Pulsar has been the cornerstone of affordable performance. Bajaj have managed to infuse the new motorcycle with a good sense of performance while retaining both in design terms and in engine note, a very distinct Pulsar-ness that is surprisingly effective. Performance is matched by a significantly more capable chassis both in ride and handling departments and that means all in all, this is a job well done. Bajaj have then gone and priced the motorcycle very well at just Rs 99,220 on-road Mumbai - just as we had predicted/hoped - which makes it, in our eyes, among the best value for money deals in the market right now, especially in the upper displacement segments