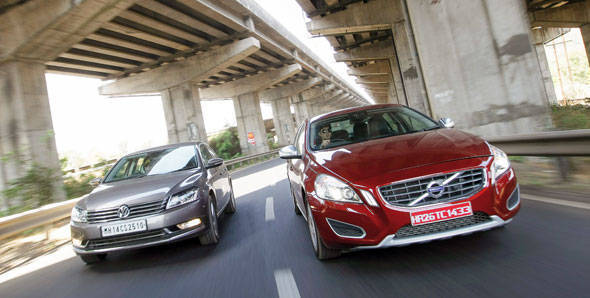 Move on. Besides selling watches these two words could also represent the temperament of the domestic luxury car market. Ages ago, only one option mattered - a three-point star. Then came two more - four rings and a propeller. And as a result almost every upmarket housing society today is packed with Bimmers, Audis and Mercs. But in the current scenario, buyers are looking for alternatives - something a little different, something that stands out from the sea of regularity. And that's where these two cars, the Volvo S60 D3 and VW Passat TDI come into the picture. Let's clear the air. They may cost around the same but appeal to a very different clientele. So why this test? Well, it's simply because they make very compelling alternatives to the big three. However these two lie at the very opposite ends of the flamboyance spectrum.

Let's start with the Volvo. I'm going to go out on a limb and say that this is one of the nicest looking cars, not just in its segment, but in the entire market. To call it beautiful would be going too far but it sure as hell is striking. The body work, from nose to rump is all perfectly formed muscle. Right from the protruding nose (faint trace of Maserati?) with those swept back headlamps and separate parking lamps, to the strong shoulder line along the side, the S60 screams sexy. Move over to the rear and  the flowing, almost coupe-like roofline merges into a strong vertical rear with those delicious boomerang-shaped tail lamps. The rear is dominated with a massive 'Volvo' plastered across the boot that would have looked out of place on most cars but seems quite at home on the flashy S60. Volvo has cleverly used silver accenting on the rear view mirrors, and front bumper,  making this car look best in brighter colours.

Step inside and the first thing you notice are the beautiful seats that are as comfortable and supportive as they look. Let your eyes wander and it's the trademark floating console that grabs your attention. There's no real function besides making for a very sleek looking unit and it does the job exceedingly well. Move over to the rear and you have a beautiful contoured leather wrapped rear bench. However the S60's cabin is not without its faults. This is one interior where form scores over function. For example, entry and exit through the rear doors is quite cramped thanks to the swooping roofline. As pretty as the centre console maybe it's not the most intuitive unit and loses out on sheer ease of use. But what you notice most of all is the lack of space in this cabin. Whether it's ease of entry at the rear, knee room, head room or just the general feel of airiness; the other car in this test has it properly trounced.

The first generation Passat was one of the most nondescript cars in the market; you'd never take a second look. VW went for a bit more flash in the newer car with LEDs and plenty of chrome work all around. Nevertheless this is still the car to buy if you want to blend in with the crowd. Granted it's a big step over the previous model with bold, sharp lines replacing the earlier soft contours. The highlight of the design are the four chrome slats on the grille and those daytime running LED lamps. The LEDs look a tad gimmicky but it works in VW's favour because

our market loves bling. Like the Volvo the first thing that grabs your attention when you step inside are the very inviting looking seats that are exceedingly comfortable over long distances. VW's trump card in the Passat is the seat coolers. Only the front seats are cooled, which is strange considering that most owners are going to occupy the back. Nevertheless, its a unique and welcome feature.

The interiors are beautifully put together with soft touch material all over the place and a very classy black-chrome combination. All the buttons and knobs have a wonderful feel to them and the Passat scores over the S60 with the inclusion of a touch screen unit. Both cars get features like parking cameras and cornering lamps that even some of the more expensive German cars don't. Oh and the Passat has that very cool park assist feature that automatically parks the car into parallel and perpendicular slots as well.

Stiff, that's the best way to describe the S60. Right from the heavy steering feel to the ride quality this is a car that's been set up for smooth roads and doesn't feel quite at home on our less than perfect conditions. However it's nowhere as tightly sprung as say a current gen 3 series and doesn't attempt to vaporise your spinal cord on every encounter with a pothole. Nevertheless you have an unnecessarily intimate relationship with every expansion joint, ripple and rut in the road. At town speeds the steering feels a tad heavy but the car feels nice and compact; if you're still unsure of the extremities just hit the 'cam' button on the centre console for a split front view camera or a rear view in two optional zoom levels. In addition to that Volvo's city safe system that emergency brakes if it suspects an impending impact makes this one difficult car to prang. Out on the highway the car cruises comfortably at high speeds, 170kmph feels quite calm although the car tends to lose some composure beyond that. The first sign of discomfort comes from the chattery steering. Thanks to the front wheel drive architecture and stiff suspension setup the steering starts picking up imperfections in the road and begins to judder in your hands under high speed cornering. The car still has grip in store but you tend to lose confidence and back off. Then there's the soggy feeling brakes that work fine as long as you give them a good stab, again perfectly functional, but not a big confidence booster. However overall handling is pretty decent with good steering feedback; it only gets hairy at speeds you shouldn't be touching on public roads in the first place.

Two minutes in the Passat and I was sold. After a particularly tiring day at the office this is the car you want to drive home in. Sink into the cushy interiors, turn on the dual zone climate control and the chaos of the outside world fades into obscurity. This car has one of the best sound insulation in the business. The engine quietly purrs in the background, the ride quality is excellent and there's next to no tyre and wind noise transmitted to the cabin.

In terms of sheer comfort the Passat has the S60 properly trounced. The steering is effortlessly light, the brakes are potent and the six-speed DSG auto box is a revelation, always in the right gear and offering quick shifts when you're making a quick exit. The start stop system is intuitive, disabling itself when you're crawling in stop and go traffic. Most of the Passat's benefits in town translate to better highway performance. It is an effortless high speed cruiser and the inclusion of paddle shifters make it that much more proficient out on the open road. The brakes offer good feedback and the light steering weights up nicely when the pace goes up. It makes no claims of being a driver's car but does what it's designed to, exceedingly well.

The new D3 engine is an inline five cylinder turbo like the D5 but has been downsized from 2400cc to 1984cc. Compression ratio stays constant at 16.5:1. Bore also remains the same at 81mm although stroke has been reduced by 16.15mm to 77mm. It also doesn't doesn't rev as high as the larger D5, redlining at 5000rpm versus 5200rpm. Of course this being a diesel that makes no difference whatsoever. Power has reduced to 165PS (at 3500rpm) from 205PS but what's important is that the D5's massive slug of torque has hardly been neutered. At 400Nm the D3 makes just 20Nm less than its bigger brother. Torque peaks between 1500rpm and 2750rpm and the S60 lays a massive slug of it when the variable geometry turbo comes on by about 1700rpm. The wave comes in strong and makes the S60 feel quite a bit faster than its 9.6s time to hundred suggests. Good throttle modulation is the key to driving this car smoothly.

One particularly nice detail about this engine is the noise it makes. Yes it's louder than the Passat but it's not an unrefined clatter, more of a nice warble. No throaty roar to be honest but still it's one of the more interesting sounding diesel engines. The Passat's 2.0-litre, 4 cylinder diesel makes 5PS more than the Volvo for a total of 170PS produced at 4200rpm but at 350Nm the torque figure is a good 50Nm down on the Swede. However the Passat puts its power down in a very linear fashion and for most parts it has a better midrange than the S60. And the DSG box is the main reason this car is quicker to the ton than the Volvo with its torque convertor.

When it comes to performance the Passat hits the ton in 9.22 seconds, 0.38 second faster than the Volvo. The Volvo however just edges it out in terms of top speed at 214kmph versus the VW's 213kmph. The two are similarly matched in terms of efficiency as well, the S60 returning 11.9kmpl in the city and 17.6kmpl on the highway for an overall figure of 13.325kmpl. The Passat does 12.2kmpl to the litre in city while stretching that out to 18.9kmpl on the highway for a slightly higher overall figure of 13.87kmpl.

The Volvo has oodles of character. It's gorgeous, both inside and out. It may not be an out and out driver's car but it is still involving. Most of all, it is a massive attention magnet, especially in burnt orange or flamenco red. This is one ride that's going to get you noticed.

The Passat on the other hand simply blends in. It's far more comfortable, performs slightly better and most importantly feels like an E-Class - for about a third of the money. And you get a lot of equipment as standard - cooled front seats with memory and massage functions for the driver, touch screen infotainment system and a reverse camera (Volvo's park assist cameras cost a huge 75 grand extra). All of this makes the Passat the better car here - it's a no-nonsense, bang for your buck car that will make you feel special.

Add in the fact that it is four lakh rupees cheaper than the Volvo, has a much better dealer and service network and the Passat is the obvious choice. So if you have 35 lakh rupees in your account and are bored of the stars, rings and propellers, this Volkswagen makes for an excellent alternative.