The last time I was on this road, I was cursing my stars. I had to brake every 70 metres or so, constantly swerve left and right, and even then, I was managing to hit and scrape the bottom of the car with alarming consistency. The National Highway 222 is literally a constant stream of varying sized potholes and bumps. There are rocks on the road too, and with shoulders so soft and deep, getting a wheel off the road can be disastrous. I was so tired and frustrated, and so concerned about the car that I turned around mid way and headed back. 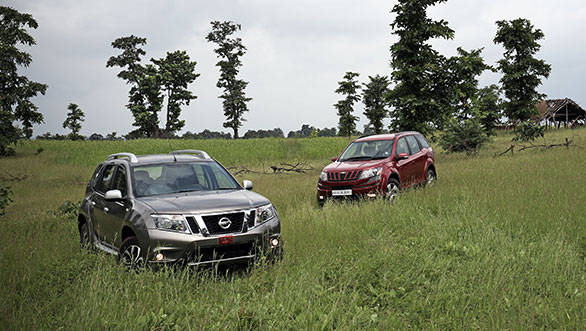 Not the wisest of moves then to be back on the same road in less than a month's time, particularly when it has been raining so hard ever since. The road conditions should now be a lot worse; if that's even possible. And it is. But here I am, actually enjoying myself. I haven't yet slowed down to a crawl, or fought the steering to avoid anything, or unbelievably, managed to thump the underbelly of the car anywhere. Welcome to the world of SUVs. Actually, the new Nissan Terrano and the recently updated Mahindra we are driving today aren't SUVs in the true sense. These are crossovers; cars with monocoque chassis but with raised ride height. 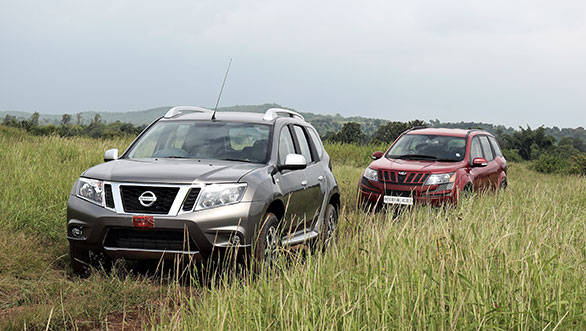 Amongst the two, the XUV has a more aggressive looking face

The Terrano more so. The Nissan is essentially the Renault Duster, which is the same platform used by the Logan. Moreover, the Duster and the Terrano have exactly the same underpinnings and drivetrain, but the Nissan does have a more aggressive face. It also looks better than the Renault, which Nissan believes is reason enough to charge a premium. This top of the line XVP version costs ? 15.1 lakh on-road in Mumbai.

The XUV W8 costs a lakh more. And, comes with an even more aggressive stance. It is bigger in every dimension compared to the Nissan, and its busy design attracts a lot of glances. It's busy on the inside too. Besides an interior that has an overload of different colours, textures and geometric shapes, the XUV also comes with way more features. There's a detailed driver interface operated via a touchscreen, a multifunctional steering wheel, digital climate control system and a cooled glovebox. There are more driving aids too such as cruise control, and on the safety end, it gets six airbags and ESP. 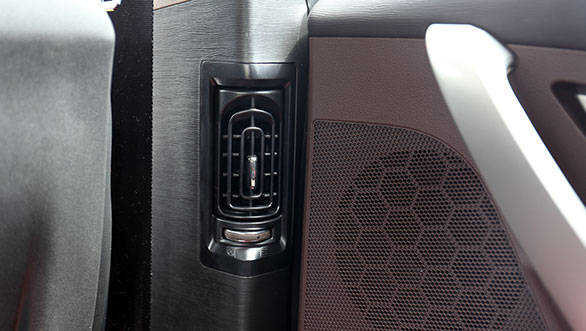 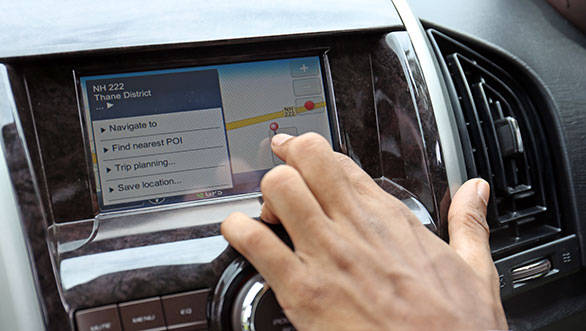 The XUV is loaded with features like touchscreen satnav, start/stop and ESP 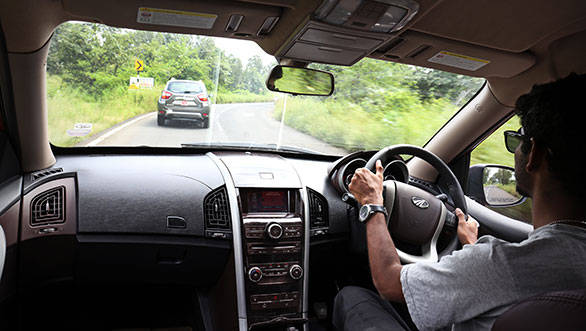 The XUV's cabin is a nicer place to be in, even for the driver

And if the features don't lure you in, the space and the ability of the XUV to seat seven will. The Mahindra offers more head, knee and shoulder room, a bigger, more usable boot, and it feels airier. Yes, the seats in the last row aren't the most comfortable and honestly, the knee room is tight. But at least there are two properly designed seats in case one ever needs them. 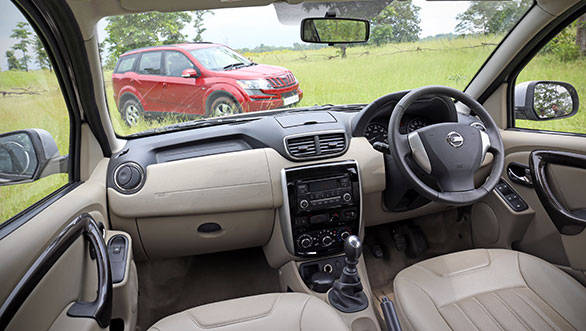 The Terrano's cabin looks plain as compared to the XUV

The Nissan is a five-seater. And its boot, given the Terrano's shorter length, isn't as useful. The Terrano also feels bare basic on the inside after the XUV. It's not exactly devoid of features, but given the Terrano's price and what the competition offers, one can't help but feel a bit short-changed when inside the Nissan. 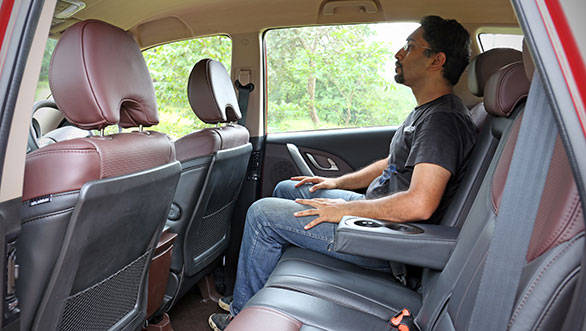 Rear space and comfort is notches above the Terrano

The Terrano also carries forward ergonomic flaws from the Duster. The ORVM adjustment is still under the handbrake lever, the power window switches still look like a serious afterthought, and the door pockets on the front doors are still useless. So if it's poser value one is after, or comfortable and pampering interiors, the XUV should be the default choice here. 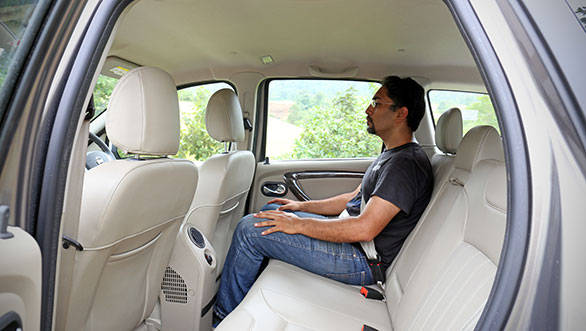 The Terrano just about has enough legroom for the rear passengers

The XUV with its continuously adjustable seat height and a reach and rake adjustable steering is better in this regard. But the forced side bolstering on the seat back does make things a bit uncomfortable; it's only truly comfortable for under-fed individuals.

Get past the seating position though, and the XUV is almost completely overshadowed by the Terrano. Back on the broken sections of NH 222, the Mahindra and the Nissan are pretty much at home, but the Terrano outshines the Mahindra. It rides better. The ride isn't plush, but it is well-judged. There's a hint of stiffness one can feel at slower speeds, but at moderate and high speeds the suspension does come into its own. It rides the broken stuff beautifully and even the deep potholes or rumbler strips at speeds are dealt with composure. There's hardly any body movement even when the road undulates, and it's just one of those cars you don't have to slow down in, no matter what the surface.

The XUV's ride quality is good too, but it works well in a narrower band. At slow speeds, over mild undulations and bumps, and through potholes, the Mahindra manages fine. However, at speed and over rougher road, it rolls around and the suspension gets noisy and jiggly. And if the bump is bad, it simply bottoms out. But, thankfully it never felt like it will break something. 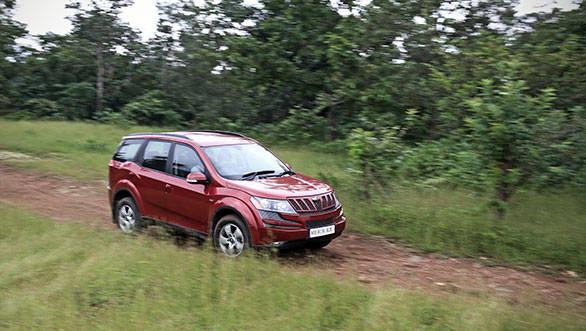 The XUV's ride quality is good, but it works well in a narrower band

Pockmarked its surface may be, for most of its length, but in between those car-breaker sections, NH 222 also has some nicely paved and windy roads. And even on them, the Nissan again was the better car. Its steering feels more alive and precise compared to the XUV. And when it is time to go around a corner, the Terrano is more planted, more eager and a lot less hairy than the Mahindra. It feels just like a car, and apart from the excessive steering kickback, it feels wonderful to drive fast around a twisty road.

Like the Terrano, there's a bit of steering kickback in the XUV too. But the Mahindra has more serious issues to deal with when it comes to dynamics. For starters, it moves about quite a bit; it rolls, pitches and skips way more than the Nissan. There's also less feedback from the steering. The initial brake feel is soggier and its tyres just can't cope. They squeal at turn in and under braking. And even under acceleration, they spin more than laying the power down more efficiently.

And power is something the XUV has in spades! The 2.2-litre mHawk engine develops 140PS of max power. At 330Nm, it has an equally healthy peak torque figure which is available from 1600 to 2800rpm. Engine output is one thing, but there's weight to be considered as well. At nearly 1.8 tonnes, the Mahindra weighs over 500kg more than the Terrano, giving the XUV a power-to-weight ratio of 78PS/tonne against 84PS/tonne for the 110PS Nissan. 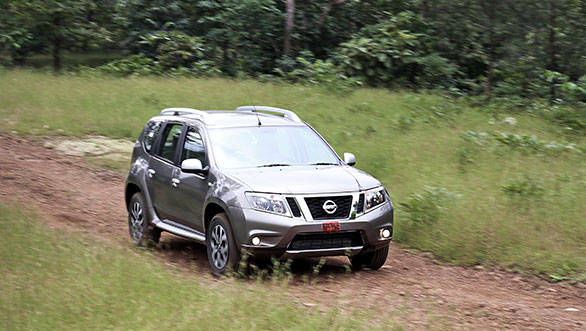 When it is time to go around a corner, the Terrano is more planted, more eager and a lot less hairy than the Mahindra

In the real world, the performance of the two SUVs is equally matched. The Mahindra takes 12.8 seconds to hit 100kmph, while the Terrano completes this run in 12.7 seconds. There's nothing to choose between the two SUVs even at the quarter mile mark with 0.1s separating the two. The two are also evenly matched in the third and fifth gear roll on slogs. But thanks to a better spaced fourth, the Terrano takes less time to complete the 40-100kmph run in the said gear. The XUV, though, manages a higher top speed; over 10kmph higher compared to the Nissan's. 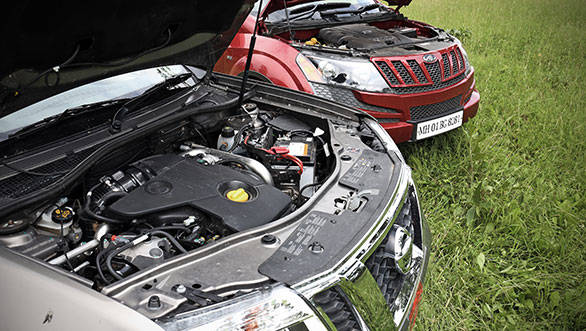 The Terrano might have the smaller engine, but in the real world it returns similar performance as the XUV, and better fuel economy

On the road, this translates into effortless overtaking, fewer gear changes and loads of torque steer on both SUVs. On a wet road, the steering on both the Mahindra and the Nissan needs to be fought with just to keep them from pulling left or right. It is less dramatic in the dry, but there is still no getting away from all that torque, especially of the XUV. This constant torque steer under acceleration might not be ideal, but on SUVs, it sure is exciting.

The Terrano though is the more efficient of the two here. It returned 13.9kmpl in the city against 11.7kmpl returned by the larger and heavier Mahindra. On the highway, the Terrano pulls away even further; it gave almost 5kmpl more than the XUV. In fact, the ARAI figures reflect this difference. Figure for the XUV stands at 15.1kmpl, while that of the Terrano is 19.0kmpl. For all its pluses on the fuel efficiency front, the Terrano's engine like on the Duster is a noisy unit. The XUV's larger engine is quieter, both inside the cabin and outside, and comes across as the more refined.

If I were to travel on the NH 222 regularly, I'd pick the Terrano. It is the better car on broken and windy roads. It is also a lot more efficient, and is in fact cheaper by a lakh rupees. But the XUV is better value. For the extra money, it offers more space, higher practicality and better on-road presence. It can also seat more people and comes with a longer and more comprehensive list of equipment, be it comfort and convenience, or even safety. 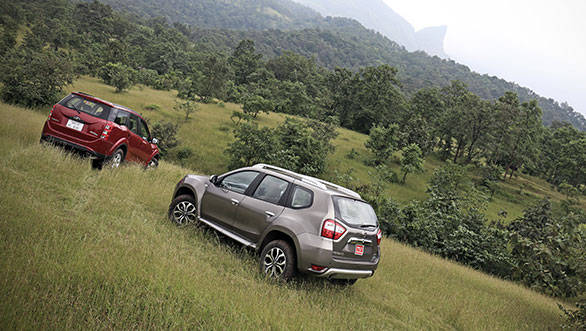 To us then, there's a lot more to the XUV 500, and it is, therefore, the deserving winner in this test

Consider this: compared to the Terrano, which gets two airbags and ABS, the XUV has six airbags, ABS and ESP as well. Add to it the automatic wipers and headlamps, the cornering lamps and the hill hold function, and loads of other stuff, and the price difference is more than justified. To us then, there's a lot more to the XUV 500, and it is, therefore, the deserving winner in this test.