When Kawasaki decided to take India seriously, no one could have imagined how rapidly and aggressively the CBU range would expand. Today Kawasaki already sells four motorcycles here with at least three more models expected to join up shortly. Plus the two models that are homologated for Indian sale are being assembled in India.

Kawasaki CBUs did start at the top though and we rode the ZX-10R earlier and now it is our turn to grapple with the beast, the Ninja ZX-14R. Which, in a word, is a ludicrous motorcycle on more counts than you can imagine. Normally we laugh at the ludicrous. Today we're shaking with fear.

Let me show you why. Kawasaki used to have two really big motorcycles in their line-up before the ZX-14R arrived. There was the ZX-12R, for all purposes a big sportsbike and direct successor to the stunning ZX-11R and the short lived ZZR-1200, which was a softer machine, touring and comfort oriented. And then, it's as if The Scarecrow came along and did a number on the Kawasaki R&D staff. Big smile. Big fear. 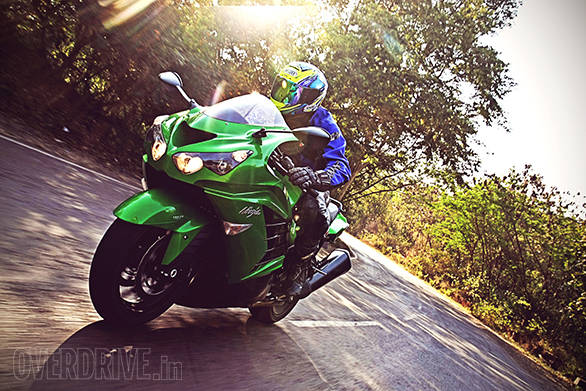 The ZX-14R is a mean looking machine

What came next was the first ZX-14R. It was 2005 and the bike was to be a 2006 model. Known also as the ZZR1400 in many markets, it was anything but sleepy despite the surfeit of Zs in its name. The 2006 bike could hit 100kmph in 2.5 seconds and top speed was limited to 299kmph. A German magazine's tests back then would show that the motorcycle would hit 280kmph from a standing start in 18.5 seconds. And that was before a kilometre had been covered. The ZX-14R wasn't ridiculous it was lunacy on two wheels.

The intervening years have done little to change that impression though the passage of time has been marked by the addition of safety nets. So our motorcycle, for instance, has three riding modes as well as three traction control modes.

But under the skin is a 1441cc engine that makes 200PS of power and once the ram air effect kicks in at higher speeds, peak power rises to 210-215PS. Which, naturally, makes the 14 one of the most powerful production motorcycles on Earth at this time. 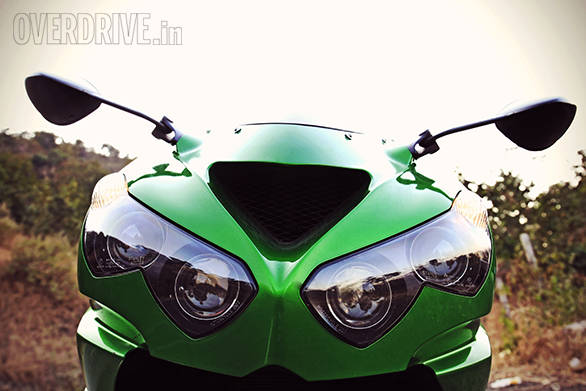 Those headlamps are real scary

Which is why sitting on a 1481mm wheelbase, the ZX-14R is a long motorcycle. The monocoque frame has been updated slightly in time, but the original motorcycle was long because putting 210PS through two wheels is a recipe for a bike that will lift its front, keep lifting it past 90 degrees and then you're on your arse working out how effective your riding gear really is.

Today, it's a lot more civil. The Kawasaki Traction Control System, KTRC, has three modes. With the interference becoming less and less as you go from mode three to one. In mode one, it takes no effort to spin the rear tyre up and lay rubber down. The long wheelbase helps here because the powerslides feel less scary than they would on something stubbier and shorter like, say, the ZX-10R.

But the overarching theme of the ZX-14R is incredible power that starts at just 4-4,500rpm and keeps on building to the redline or when you cry uncle and roll the throttle closed. There's no let up, no sign of stress. Just a gruff howl from the exhaust, a thrilling intake roar and then the world around you shrinks into a frightening blur.

So much power that initially, you forget all about feeling the rest of the motorcycle. Where a lot of bits are working hard to keep it together. Run too fast into a corner and the ABS brakes slow the hefty machine down rather well. Bang down the gearbox out of fright and the slipper clutch prevents you from having a gigantic motorcycle crossed up on the brakes. The monocoque chassis, a Kawasaki feature since the ZX-12R, is narrow but not skinny and it does manage to allow the tyres to put the power down, to brake and despite the length of the motorcycle, turn.

Yes, turn. The ZX-14R isn't as deft a dancer as the ZX-10R but for a motorcycle this long, it turns well, favouring stability and confidence over agility and lightning quick changes of direction. Thrust headfirst into a corner, the chassis has enough skills to absorb bumps and hold a line. And absorb the bumps is something the ZX-14R does startlingly well. It uses both its heft and well-tuned suspension to absorb terrible roads that on any other supersport will have you out of your seat and screaming obscenities at the nearest municipal government. If it weren't for the bonkers engine, it would almost be the talking point. 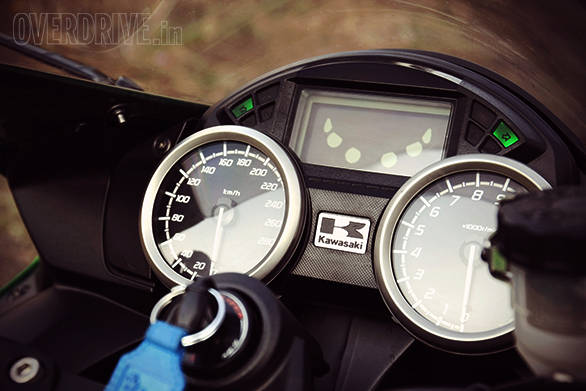 Also talking points are various odd sensations that the ZX-14R throws up, some nice and others not so nice. I loved the cold sensation of the metal as we filled up the huge 22 litre tank. The cold petrol makes the tank grow cold and it's an oddly pleasing sensation. Sort of like drinking cold water when you're thirsty except for the sweet smell of petrol in your nostrils. The tacho is on the right and the speedo on the left and they're at a quick glance, identical. Which meant I spent the first 25 minutes of the ride looking at the speedo wondering how the revs sound so fast and looked so low on the tacho. The central digital display, on the other hand, is crystal clear though it looks old and show a lot of information controlled by the rocker switch on the left grip.

Then there is the styling of the bike. Without beating about the bush for even a moment, the ZX-14R felt like one of the largest motorcycles I have ever ridden. And I owned a 1970s Honda CB750 that felt like a supertanker on two wheels. The fairing is huge and wide and the four lamps give it a distinctive identity. With that giant NACA duct above the lights, it's a menacing front-end that I wouldn't want to see in my mirrors too often. Given its speed, the ZX-14R is of course, more likely to be a dot in the distance in front rather than behind you. The side fairing, similarly is a massive expanse of plastic with the four strakes in contrast shiny black clearly an identity element for the motorcycle and a subtle hint at the speed the bike is capable of and the aerodynamics that must come together to make its 320-something kmph speed possible.

It is such a sensory motorcycle that you can almost forget that the ZX-14R has a more than alarmingly powerful engine. It is a spacious motorcycle that uses sporty ergonomics but is still an extremely comfortable mount for hours at a stretch. With Eco Mode and its giant fuel tank, the ZX-14R is by nature a continent crosser and everything on the motorcycle does work towards achieving that result. 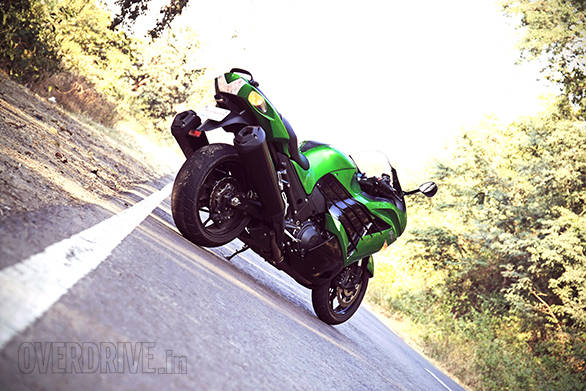 But as impressed as I am by the ZX-14R, unlike the ZX-10R, I don't think this is a motorcycle you can ride often. In traffic, its considerable size makes you want to ride like it's a car and your ability to exploit gaps  what motorcycles do so well  is hampered. It never heats up or anything, but things like parking are high-effort because this is, again, a large motorcycle that takes effort to park and then extricate from parking. The Suzuki Hayabusa, admittedly slower and less powerful, is actually a vastly easier motorcycle to live with in our cities. And a bit cheaper besides.

The ZX-14R is priced at Rs 16.9 lakh ex-Pune, which brings its on-road price to almost Rs 19 lakh. That's not pocket change. For the money you get a tremendously fast motorcycle that also happens to be a stunning open road motorcycle with great range and comfort. It's a bit unwieldy in our traffic but it also absorbs our roads rather well. But to be perfectly honest, as amazing an achievement as the ZX-14R is, as bonkers a Kawasaki as it is, I'm a bit surprised to note that I'd have to say that it takes a special kind of madness to own a motorcycle like this. And thankfully, this kind of madness is rare rather than an epidemic.

Click here for an image gallery of the Kawasaki ZX-14R