When Renault first brought the Duster to India, one of the questions put to the French automaker repeatedly was the logic behind not having the four-wheel drive model in the launch line-up. The primary reason, of course, was that unlike the two-wheel drive model, the Duster AWD uses a different suspension layout and would complicate the production. So Renault asked us to hold our horses and wait for the AWD model to arrive later. Well, that day has come. We do not have a price just yet, but we're out driving the Renault Duster AWD today. Here is the what we have learnt so far. 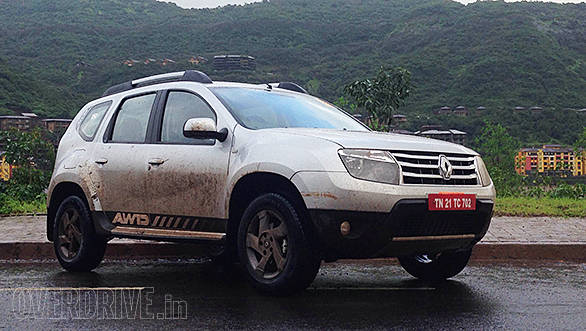 We loved the 2x4 Duster for its excellent ride quality and these changes have just sweetened the package. The ride is even more supple as more of the bumps and jolts from the broken roads around Pune were easily evened out. The new suspension does seem to have added a little more body roll to the mix, but not that much that it upsets the handling - another trait we admired in the two wheeler driven version. Kickback, one of the issues with the two-wheel drive Duster seems to have reduced and in both two- and four-wheel drive modes, there was a noticeable reduction in kickback when you hit a bump during a corner.

To show off the Dusters' new found mud slinging abilities, Renault took us off the beaten path to an off-road track on the outskirts of Pune where we put the SUV through its paces. The terrain consisted of some muddy trails with some really deep sections as well as some steep inclines and rocky trails, made all the more interesting, thanks to a constant shower of rain. The Duster handled it all in its stride, dispatching one obstacle after another with relative ease. But it does it slightly differently than any of the other SUVs that we are familiar with (Thar, Safari, Scorpio, Gurkha). The 1.5 110PS diesel likes to be revved up to over 2,000rpm before the torque really sweetens up, meaning that you tend to approach obstacles and inclines at a slightly higher speed than usual and then let that lovely chassis and suspension setup handle the rest for you.

Most obstacles were handled in the 'auto' mode which sends power to the rear wheels when it's needed. And even in really slushy twisty sections, this was the best mode as it would intelligently cut power to the rear negating understeer when changing direction - usually  caused by the rear 'pushing' the front wide. The lock mode was only used on one steep slope which also needed a fair bit of momentum to get up. Renault recommend that the lock be only used in really slippery conditions.

Renault is adding its Electronic Torque Control System which is responsible for torque distribution to the wheels. Also in the mix is the hill start assistance that prevents that car from rolling off when you're starting on an incline. Not directly related to the four-wheel drive is the new 'eco' mode that Renault says cuts fuel consumption by as much as 10 per cent - the company is saying the mileage figure for the AWD model is 19.72kmpl (ARAI).

Under the familiar bodywork is the same 110PS 1.5-litre diesel that powers the RxZ variant though the badging on the AWD reads RxL. The same six-speed manual gearbox is on duty on this Duster as in the two-wheel model.

The AWD model is to come in two models, the RxL and the top-end RxZ. Both get the new two-tone red and black upholstery. The soft-touch plastics of the dash also boast a new multi-function display along with a three-spoke steering wheel that is wrapped in leather on the RxZ model. The top model also gets cruise control and a new touchscreen entertainment system which has been left out on the RxL trim. This touchscreen system isn't all new. It became available as an option on the two-wheel drive models in January 2013 and will be standard on the RxZ AWD.

The AWD model also boasts traction control. The RxL will also get steel rims while the RxZ gets the same alloys as the two-wheel drive Duster but in a fetching steel grey. On the exterior, both cars sport new headlights with blacked out bits inside it plus badging. These headlights, says Renault will remain exclusive to the four-wheel drive model and there is currently no plan to roll them out to the other models.

Renault should shortly start bookings and start selling the AWD model, probably at a premium of between Rs 65,000 and Rs 80,000 over the two-wheel drive models. Expect to be able to buy one before the festive season opens. An AWD Duster should mean that an AWD Terrano will soon also break cover but officially Renault says that while the Terrano AWD has been discussed, there is no final decision on whether that model will go on sale or when. 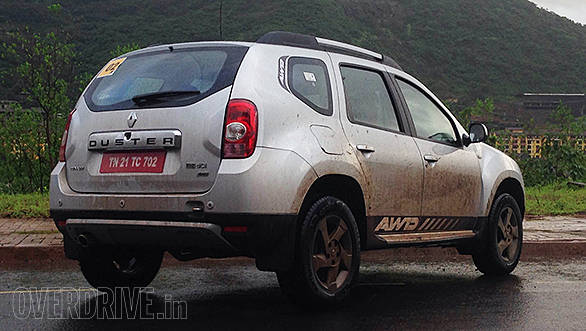