It's been six years since the Corolla Altis rolled out in India and this means its time for an all-new one. The last time this happened, some didn't realise that the car was in fact a generation newer. Can't really blame them and that's because the Corolla is easily one of the most recognisable cars around, every new model has taken inspiration from the outgoing car. This formula has worked around the world for the Japanese manufacturer, after all it is the world's highest selling nameplate ever. But just look at the car featured here, well if someone had to remove the car's badging, one would have never guessed that this very car is in fact the 11th generation Corolla Altis. When this car was unveiled around the world last year, people stood up and took notice and now here we are in India doing the same. It's a completely different approach from Toyota but does this mean the car will regain top spot? 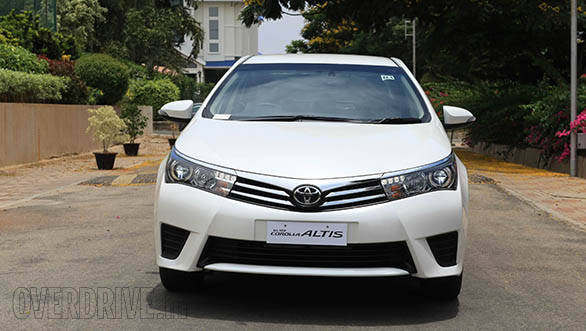 It's a completely different approach from Toyota in terms of design

I can't stop staring at this car, look at it from any angle and it looks striking. The dynamic design approach follows an edgy theme, there are merging lines everywhere, giving the car a lot of character. The face is smart and the first thing that one notices is the prominent line running from the bonnet to the bottom of the bumper via the sharp headlamps. Another highlighting feature is the LED daytime running lights that make an appearance for the first time in a Corolla. Look closer and you will notice the chrome slats from the grille actually continue to flow all the way inside the headlamp. In fact the headlamps and grille look more like a single unit. The bumper features sporty detailing while the fog lamp housing is quite prominent and goes well with the overall theme. 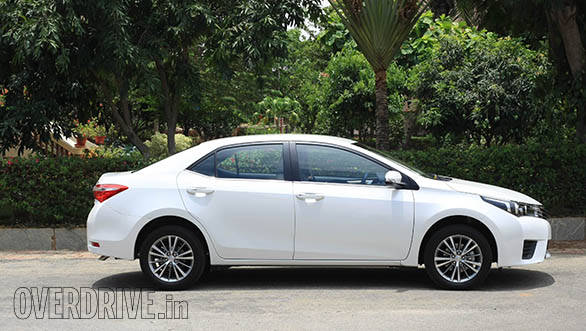 Move to the side and the increase in length is evident (the car is also wider and is slightly lower). The sides are pleasing to the eye as well, the window line rises sharply towards the rear quarter while the shoulder line though not very prominent adds character. The wraparound headlamps and tail lamps feature sharp ends and neatly merge with the lines. 16-inch alloy wheels (standard in top variant) are stylish thanks to the multi-spoke design. The rear is dominated by a bulky bumper that features two diagonal lines at the bottom like in the front while the sharp and slim LED tail lamps blend well with the chrome garnish. 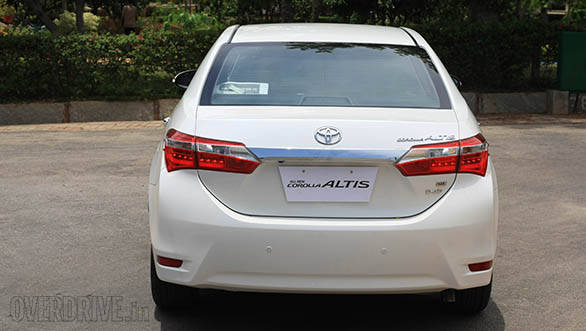 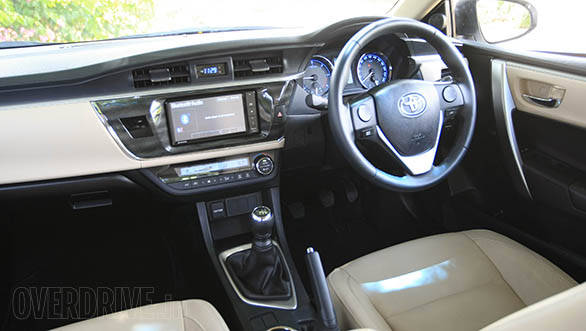 The dashboard features a flat front and various layers, overall design is simple and yet attractive

Inside too, the design approach is very different from the outgoing car and goes well with the exterior. The dashboard features a flat front and various layers, overall design is simple and yet attractive. An inlay in the centre surrounds the 7-inch touch screen infotainment system and is finished in a carbon like pattern with chrome outlining that looks best only when seen from a distance. The air vents are slim and are placed in between the top and middle layer, the digital clock however looks out of place and very old-school. Below, the climate control buttons and interface take up very little space and flow well with the centre console. The gear lever surround is finished in silver just like the door handles. 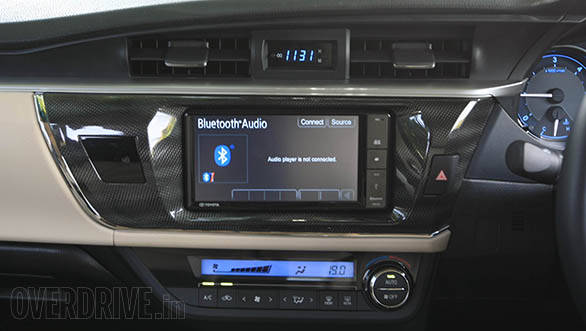 There is a new Bluetooth-enabled music system

The steering wheel also uses a hint of silver detailing and features two circular stereo and phone controls that are placed and work well, the steering is good to grip too. Instrumentation is clear and a digital display in between the dials shows various details like cruising range, average and instantaneous fuel efficiency, settings etc. Like the dials, the cup holders are also backlit with blue illumination. Quality of materials used is good while fit and finish is impressive. 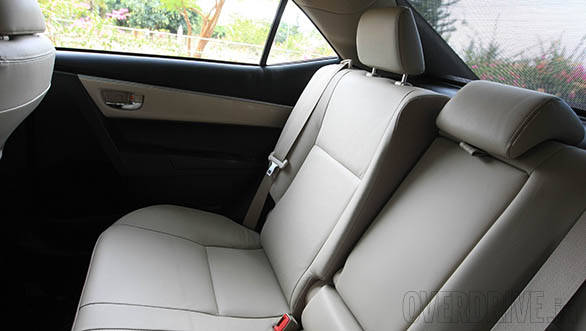 The rear seats are relaxing as well and since the wheelbase and overall length has increased, rear knee room has also gone up by an impressive 92mm

In terms of comfort, the Corolla doesn't disappoint. Front seats are comfortable while lumbar and thigh support is good making it ideal for long distance driving. The rear seats are relaxing as well and since the wheelbase and overall length has increased, rear knee room has also gone up by an impressive 92mm. The rear seats even recline by simply pulling a lever placed next to it, if needed one can choose to sit more upright or leaned back. Rear seat comfort has been particularly improved based on feedback from existing customers. A flat floor and good shoulder room also means that three grown ups can be seated comfortably. To liberate maximum passenger space, boot space has slightly reduced from 475-litres to 470-litres. The seats even fold and split 60:40 offering more cargo space if needed. 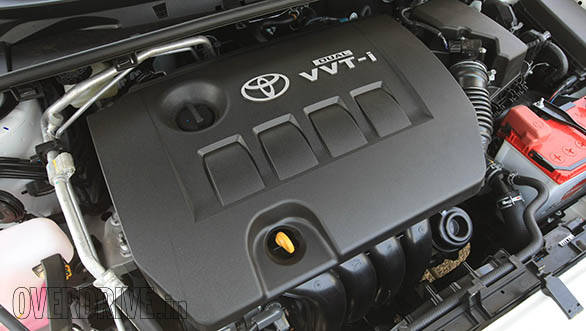 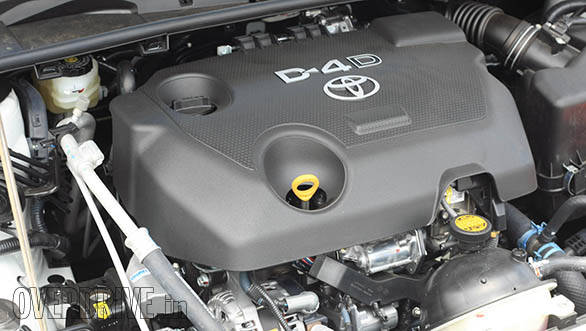 The Corolla may be all-new but it carries forward the same powertrains seen before. The 1.8-litre VVT-i petrol and the 1.4-litre D-4D diesel. These are reliable and proven engines but they lose out in terms of outright performance when compared to rivals. We drove both the models and felt the need for more power. The petrol motor is refined and very smooth, the DOHC unit puts out 140PS at 6400rpm while peak torque of 173Nm is available at 4000rpm. However, we were only given the automatic variant that features the new CVT with seven artificial sequential ratios. Step on the throttle and power delivery isn't all that impressive, the typical CVT rubber- band effect has been reduced but the motor gets noisy and has to work harder to get to higher speeds. Part throttle driving improves the experience considerably, power delivery is more linear while the shifts are smooth. Gears can be shifted using the lever or the standard paddle shifters, downshifts are very quick and there is hardly any delay. The petrol automatic is a good town and highway car. 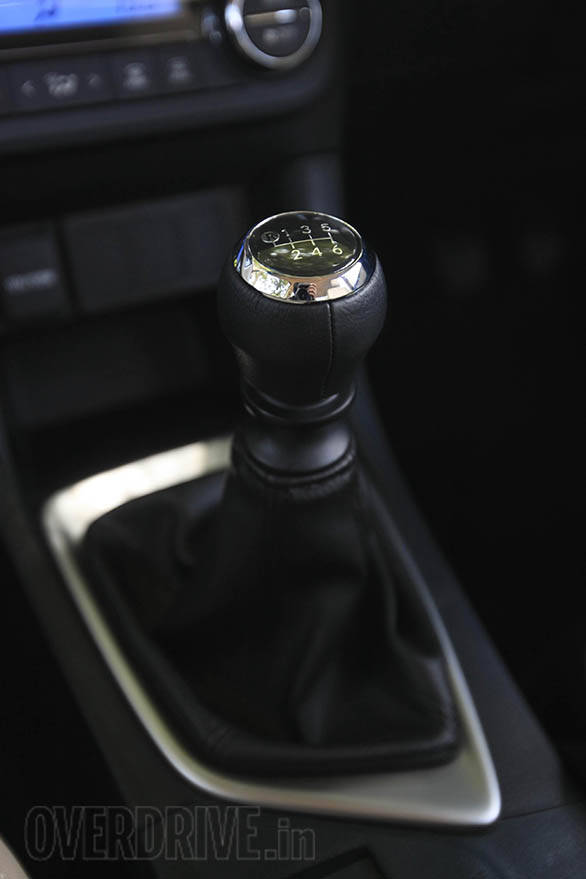 The diesel comes mated to a 6-speed manual transmission 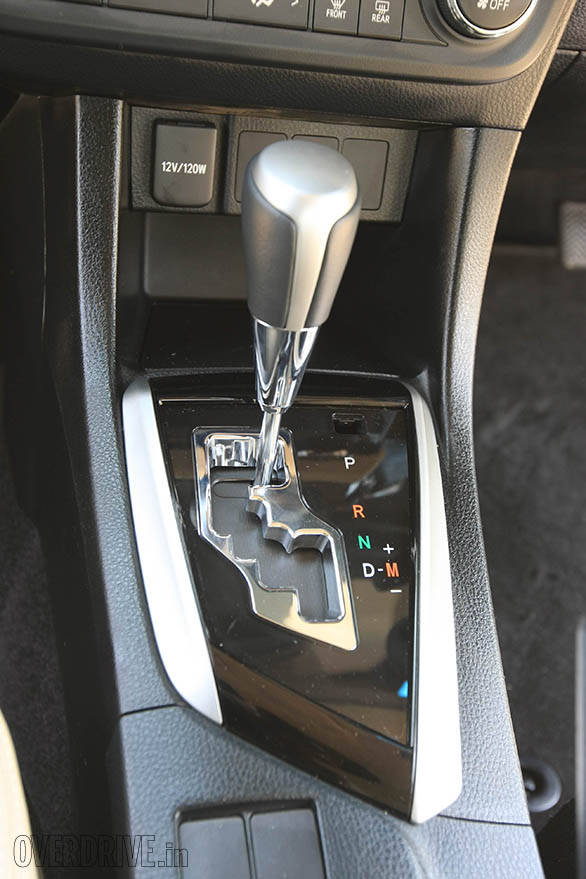 The petrol gets a 7-speed CVT

The 1.4-litre VGT diesel as mentioned earlier is the same motor seen before and is mated to a 6-speed manual transmission. Power output hasn't changed, 88.4PS of max power is available at 3800rpm while 205Nm of peak torque is delivered from 1800-2800rpm. The engine is the least powerful in the class, few diesel cars from lower segments are in fact more powerful, turbo lag is still prominent and one is often forced to drop a gear to get moving. It is however quiet for a diesel and refined too, the new car even gets better insulation, further reducing NVH levels. Since the engine is same as before and the car's kerb weight has slightly reduced, expect best in class fuel efficiency. 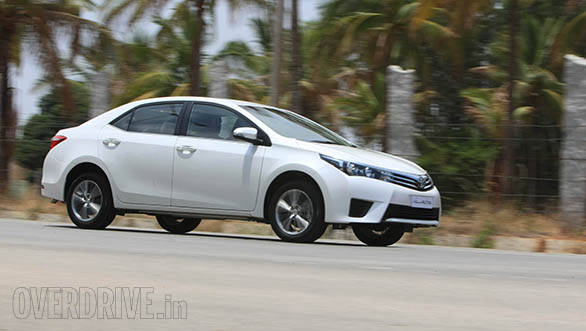 Ride and handling has improved though and the chassis can easily handle more power, the rear suspension is now a torsion-beam instead of a fully independent suspension but handling is still better. The steering is electrically assisted and is more direct now but it doesn't feel light like in the previous Corolla, the added weight makes it all the more involving and precise at higher speeds. However the steering could have been lighter at parking speeds. The suspension is tuned to offer better ride quality but around corners at higher speeds, it still holds the line well. The diesel variant does feel more front heavy but is still a vast improvement over the car it replaces. 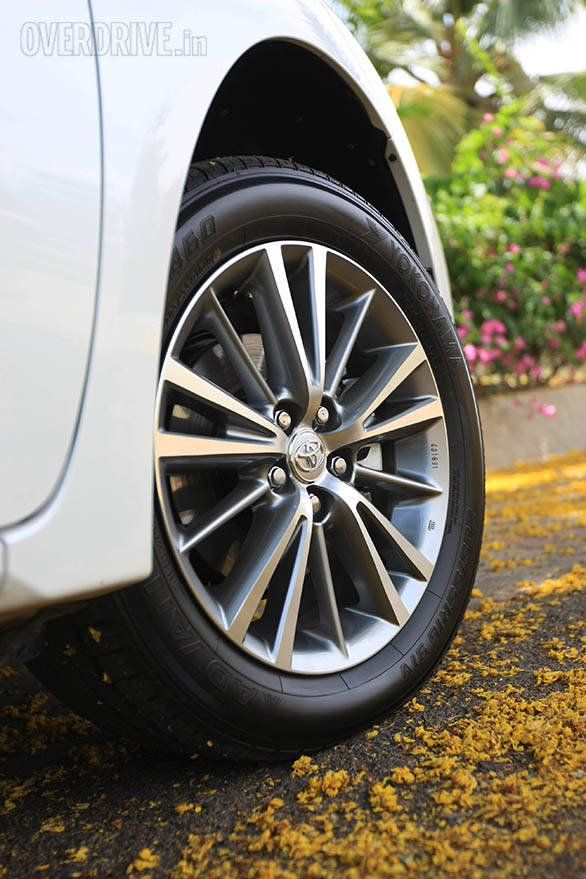 The top variants are even offered with standard 205-section,16-inch Yokohama Advan A-460 rubber that offers very good grip around corners. Compared to its rivals, the Toyota isn't the car that comes on top in terms of dynamics but it sure isn't the least involving either. The ride is plush and Toyota engineers have done a good job in setting up the suspension to suit Indian conditions. The diesel gets a more stiffer setup but when compared to the petrol variant, one can't really tell which is better. Suspension noise is less and over potholes and rough sections, the car simply glides. The Corolla has been a popular chauffeur driven car and the newer generation is now even better, thanks to a more comfortable ride, better space and features. 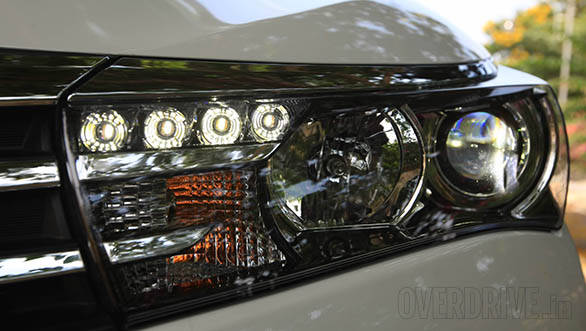 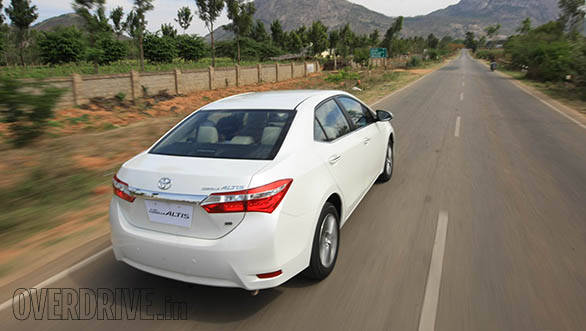 The Corolla Altis will be on Indian roads very soon

The Corolla Altis will be on Indian roads very soon, the car has improved considerably especially in terms of styling, premiumness, space, dynamics and features while still being quite practical. Performance could have also improved similarly especially since it still is the least powerful in its class. But for those looking for a car that excels in everything else, the new Toyota in town is worth considering and may very soon become the new best seller.