The Harley-Davidson XR1200X was not an ordinary Milwaukee-issue motorcycle. It was unabashedly a normal motorcycle though dyed heavily in Harley hues. Unfortunately, normal proved boring for Harley customers and the XR-X disappeared. And in its place, as it were, comes the Harley-Davidson (Sportster) Roadster. That's right. The Roadster works with Sportster underpinnings and then it adds bits and bobs to create a rather unique experience - a sensation that we actually liked quite a lot on our first ride. But now, the going gets tougher for the Roadster because now it has to deal with the OVERDRIVE road test.

Technically, the Harley-Davidson Roadster is a mish-mash of very old Harley-Davidson designs. There are bobber, cafe racer, drag racer and many other 'formats' in the mix and in that sense, it is hard to classify the design. But it looks good and cohesive. The stance is hunkered down and ready to go and the lack of adornment works rather well with it. 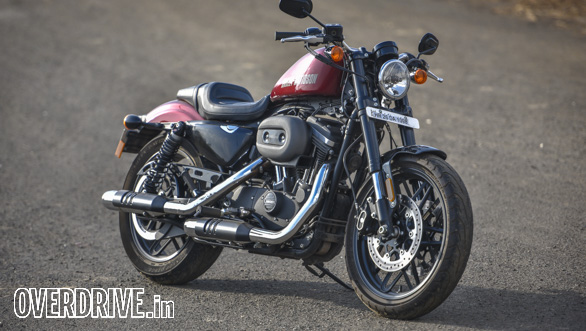 The Harley-Davidson Roadster has a striking pared back silhouette that starts with the narrow, almost flat bars and the tucked-in headlight

So from the tucked in headlamp and the low bars to the peanut-style (but 12.5 litre) tank and the spartan bodywork, the Roadster looks like a motorcycle that was shorn clean of doo-dads and tat in the hunt for performance. It's a good look, too. The upside down forks and the twin front discs add immeasurably to the performance look, to be sure.

Build quality is typical Harley-Davidson with a dramatic preference for metal over plastic. It looks and feels solid and the fact that this motorcycle doesn't rattle at all is a very good sign indeed. 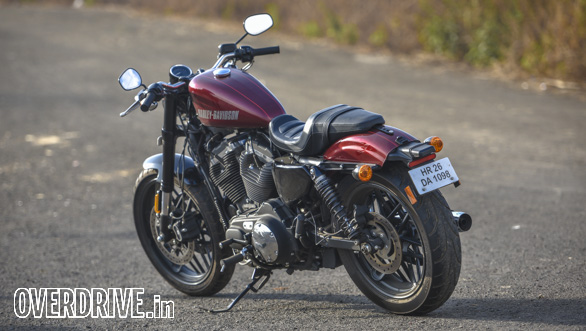 Finish could improve. Our test bike looked ragged because there was loose, untethered wiring all over the place but I am going to assume this was a sign of the hard life this test bike is living, not a sign for all Roadsters. Indeed, when we first cast eyes on the Roadster in Rajasthan, it looks far neater. 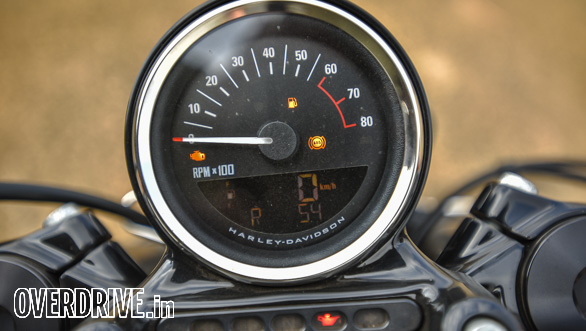 The simple single-pod meters on the Harley-Davidson Roadster show more information that you'll believe. The black LCD can be very hard to read in bright sunlight though

On the whole, this is a striking motorcycle. It feels small to ride and you feel tucked in. It looks good and in many ways, it almost appears as if it is inviting you to do stuff, to customise it with bits. And the Sporster parts catalog, both Harley and otherwise, is vast.

The Roadster uses the 1200cc V-Twin from the Sporster 1200s like the Forty-Eight. That's a good place to start. The motorcycle pulls with a slight hesitation because the gearing is a bit tall. But moments later, it settles into a smooth groove that will carry it to almost 130-140kmph without any complaints. It's got the trademark vibration that tells you you're riding a Harley but the engine is smooth enough to not cause buzz in the hands even after long stints. It sounds good and goes well. I only wish the gear lever was shorter in length and it travelled through a smaller arc for each change, it would make it feel more sporty in keeping with the intent of the motorcycle. 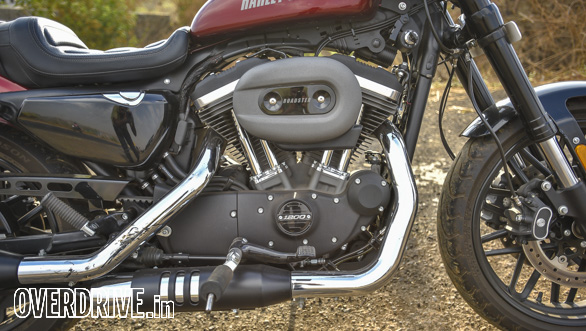 The Harley-Davidson Roadster gets the 1,202cc V-twin, the same as the one in the Forty-Eight. It's a nice engine which settles into a torquey, smooth groove. The gearing could have been lower though and getting off from a standing start requires a fair bit of clutch slip

Performance is brisk for the weight and this isn't a slow motorcycle. However, you realise that you actually have to rev the engine up to get the fastest acceleration numbers which feels a bit strange. But most of the time, you're sitting at around 3-3,500rpm enjoying the torque and the insistent rumble from the pipes.

Economy is all right. City economy is 17.8kmpl and the highway figure is 22.7kmpl which points to an overall economy figure of 19.03kmpl, which is just about right in this segment.

Harley-Davidson took the geometry from the XR1200X so that Roadster's feel in corners should not be a surprise. It's a bit too heavy to really turn on the proverbial dime, but it's certainly responsive as Harleys go. The bars require a fair push to get corners started but the Roadster changes direction well after that, feeling responsive. Mid-corner poise is stable and the grunt drives out of corners well. Lean angles are good for Harley but pegs will scrape fairly early. The pegs, in fact, will come in for more criticism in a minute. 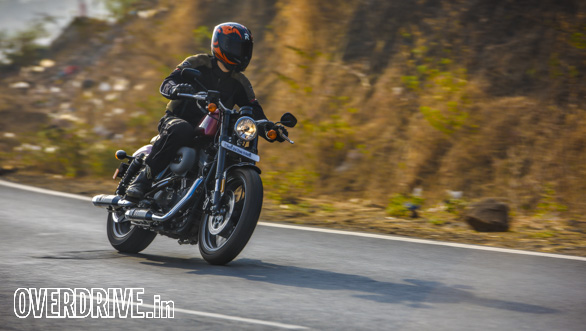 The Harley-Davidson Roadster has a fairly responsive front-end and that makes corners quite a lot of fun. Eventually the pegs will scrape but this is very much the sportiest Harley you can buy right now

The brakes are a surprise. The twin discs give the Harley considerable stopping power and that means tight twisty roads are handled with more aggression and the discs work well and hard. 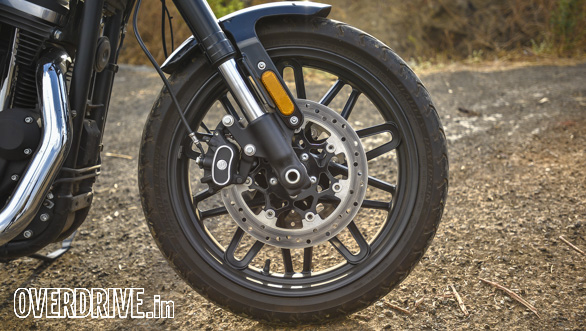 There could be more feel but the Roadster stops well and controlling speed as you approach a corner is as effortless as I've ever seen on a Harley.

In terms of living with the motorcycle, the ride quality is the biggest issue of all with the Roadster. The upside down forks up front and the preload adjustable rear twin shocks are very good when the road is smooth. They keep the chassis poised so you can hustle through the corners without waiting for the suspension to settle and allow you to do the next thing. 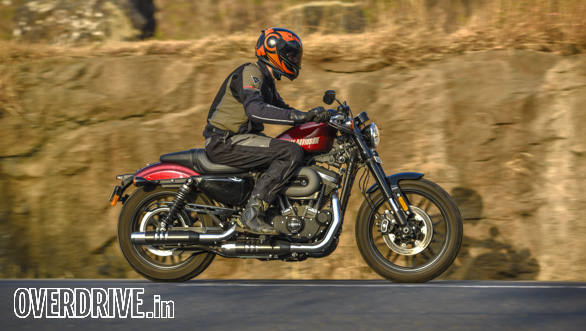 The Harley-Davidson Roadster has an odd but not uncomfortable riding position with the low bars and the mid-mounted pegs.

But this is an exceptionally stiffly suspended motorcycle. So you will feel every bump and jolt the tyres roll over. This gets tiring very rapidly. Mid-corner bumps will upset the motorcycle noticeably while every bump, small and large is communicated with hardly any filtration to the rider. If there was one area where Harley should focus on improving the Roadster, it would be this. It will take a hardcore rider to live with this stiff a setup on our roads.

The footpegs and ergonomics

The Roadster keeps the mid-mounted controls and pegs and that's a surprising problem. The low bars and the mid-set pegs actually create an odd but not too uncomfortable riding posture. It's not a dealbreaker and you will get used to it in time. It actually looks good in a muscled American sort of way from the outside. 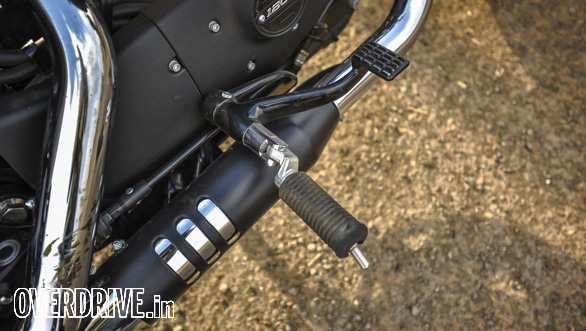 The Harley-Davidson Roadster pegs stick out quite a bit and they're in an awkward place when it comes to putting your feet down or walking the bike around slowly. You get used to them but expect a lot of shin or calf contact with them

But the mid-mounted pegs are set a bit too wide and that feels wrong for a motorcycle that is supposed to be sporty. It is something we'd noted when Motomiu made their first motorcycle - their rearsets were also set too wide and it disturbed the compact, connected feel a sporty machine should have.

But more important than that, the pegs are in the way in almost every way. When you come to a stop, the pegs are exactly where you feet normally go down. This means you have to consciously place them ahead or behind them at every stop and it makes walking the bike about at slow speed annoying. The width of the pegs also means that the feelers scrape early and you cannot help but feel that a narrower set of mounts and less wide pegs together would be a dramatic improvement in ergonomics for the Roadster.

The Harley-Davidson Roadster is priced at Rs 12.20 lakh on-road Mumbai. For the money you get a sporty American cruiser that understands how to corner as well as to look and feel like a Harley-Davidson. As engaging as the Roadster is to ride though, the ride quality is something else altogether. 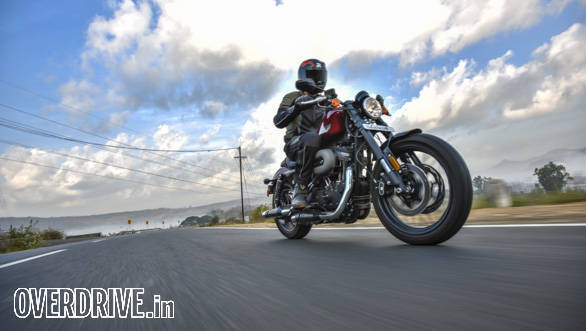 The Harley-Davidson Roadster sounds and look great when you're riding on good roads. However, this is an exceptionally stiffly sprung motorcycle and bad roads are hard, hard work

If you wanted the sportiest riding experience to come from Milwaukee right now, the Harley-Davidson Roadster is they way to go, no doubt at all. However, my sole caveat is that you must take a test ride before you decide - and see if the ride quality is something you can live with. 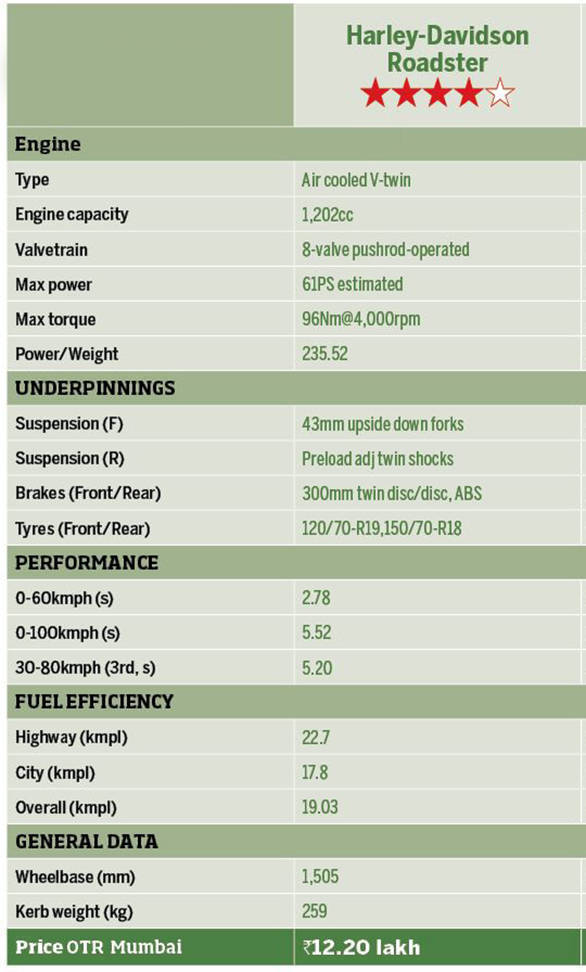