Crossovers, compact SUVs, pseudo SUVs, hatchback on stilts - call them what you want. There's no denying that these vehicles are gaining immense popularity in India. And manufacturers are set on dishing out as many of them as possible to ensure that every void between segments is filled. In fact, there are so many of them that I've actually lost track of what each one is called. The latest one is the Hyundai Tucson, a premium crossover that's positioned between the Creta - another erm premium crossover - and the full-size SUV, the Sante Fe. 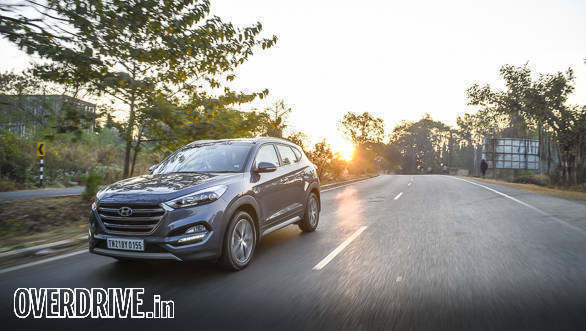 This isn't a new segment, but it's one that's standing on its last legs. While we're curious to see if the Tucson justifies the reviving of this segment, what's really got us wondering is if the new Tucson lives up to the high standards already set by Hyundai over the past few years. So let's find out.

I have to admit, the Tucson is the best-looking Hyundai in an already good-looking line-up of vehicles from Hyundai. Not even the Elantra, which in my opinion was the best-looking car there until now, catches my fancy as much as this. With a lot of lines running around, especially in the front, it does look a bit busy. However, I think the Tucson pulls it off quite well. The long wrap-around headlights neatly integrate with the large chrome-slatted hexagonal grille, which is becoming a characteristic of the newer Hyundais. The flat-ish face along with the high-placed headlights makes it look butch and SUV-like. 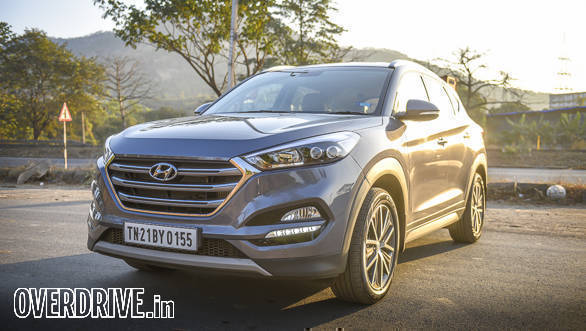 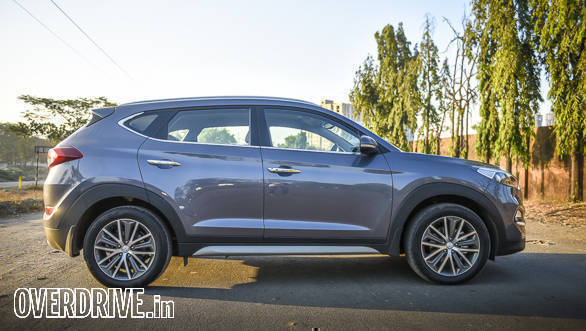 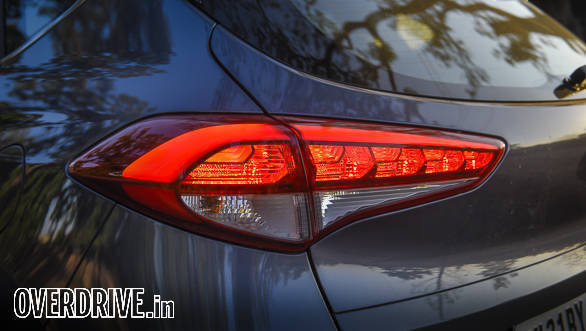 This SUV-like stance is carried forward to the side as well, with its muscular haunches and plastic cladding around the wheel arches. The roof, which appears to be sloping quite sharply, only looks so because of its clever design - the inclining waistline and windowline, along with the high rear haunch. This translates to good headroom for the rear passengers. But the biggest eye-catcher is the wheels. The multi-spoke two-tone 18-inch wheels look very sporty and upmarket, and suits the overall personality of the car.

It's only the rear that gives away the Tucson's crossover nature. Apart from the sharply angled tailgate, the high position of the thin tail lights takes away its SUV stance. It could also have to do with the fact that there's some resemblance to the Elite i20's rear. But that's not to say it's bad. It still looks very premium and sporty, especially with the twin-exhaust tips. 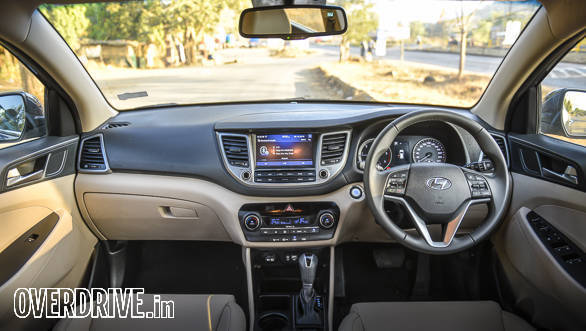 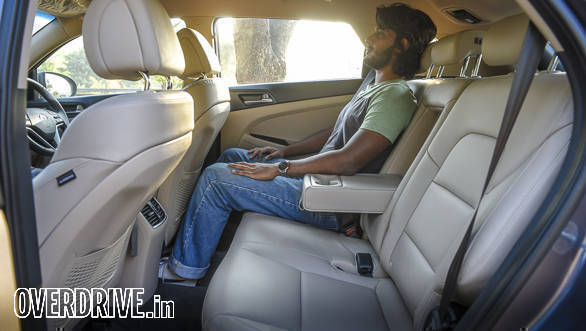 It's the same story with the interior. While there is some resemblance to the Creta, it feels a lot more premium and sophisticated. It doesn't get the driver-oriented centre console like in the Elantra, but it is just as ergonomic with large, easy-to-access buttons. And the light theme all around makes the cabin feel very roomy. The symmetrical design of the dash, along with quality materials, makes the Tucson look and feel very upmarket. The front seats are very comfortable with good cushioning and contouring, while the rear seats aren't as nice. However, kneeroom is quite sufficient at 740mm, which is the same as in the Elantra.

The Tucson's boot space is quite reasonable too at 513 litres, which is 111 litres more than the Creta. However, there is quite a blind spot at the rear three-quarter. And that along with the small rear window would have been a problem while reversing if not for the wide-angle reverse camera.

The Tucson is a quick car! It managed 0-100kmph in an impressive 9.3 seconds. However, power delivery is smooth and linear, and there's barely any turbo lag with the torquey 2.0-litre turbo-diesel's 400Nm coming in from 1,750rpm to 2,750rpm. Its peak power of 185PS comes in at 4,000rpm. The engine is very responsive and quite free revving, while the smooth 6-speed automatic goes hand in hand with the engine's creamy character. 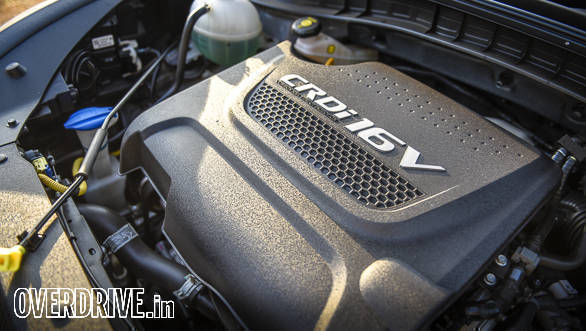 That said, the engine is a bit louder than expected at idle and at high revs. Don't get me wrong here - it's still very refined and quiet as far as diesel engines go, but our expectations were set sky high by the amazingly refined 1.4- and 1.6-litre diesels. The 6-speed torque converter isn't the quickest unit out there either. The system responds very quickly to your throttle inputs with the revs immediately climbing, but the gear change itself, as seamless as it is, is a bit slow.

The Tucson is decently efficient too in Eco mode, with an average of 12.25kmpl in the city and 16.71 on the highway. In this mode, gear changes happen earlier in the rev range, while upshifts aren't made as willingly as in the other modes. But the engine is so torquey that even if you steadily increase throttle input, it will effortlessly pull in the same gear. However, in Sport mode, the engine livens up with sharper throttle response, while the transmission shifts up later.

One of the most impressive qualities of the Tucson is the balance between good handling and ride quality. The Tucson gets MacPherson struts up front and multi-link independent suspension at the rear. It absorbs the smaller ruts and broken roads without complaint, while the larger holes are absorbed with a polished 'thump' instead of a crude 'thud'. And that itself makes it feel so much like a European luxury car. The suspension is a bit on the stiffer side but is still very supple.

This translates to uncompromised handling. The chassis feels very well balanced, and direction change is quick and precise, making it very nimble. The only thing stopping you from driving this like a hatchback is the 4.47m length. It's also very stable at high speeds both on straight and winding roads. Believe me when I say that it will shock, and maybe even scare you, with the speeds it's capable of around corners. 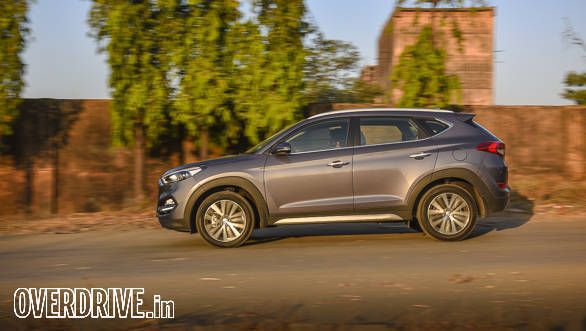 I also had the chance to drive the new Toyota Fortuner that day, and it gave me perspective on what the Tucson really is - a crossover with a good ground clearance of 170mm. It's far from being an SUV with its limited off-road ability. It also doesn't offer the same indestructible feel of the Fortuner where you can rail it down broken roads without worry. But we're not going to hold that against it. It was meant to be a good road car, and a good road car it is.

However, the only thing that stops this from being an engaging car is the lack of connection between the car and driver. The electric steering is a big improvement from all the other cars in the stable in terms of feedback and weighting. However, it still feels a bit artificial and disconnected despite the extra weight in Sport mode. Additionally, there's a fair amount of torque steer and wheel spin if you accelerate hard from low speeds, forcing the ESC to come on very often. This upsets the steering and can get a bit unnerving, especially when you're pulling out of a corner in a hurry.

Similarly, the brakes have a dull wooden feel, and that is another characteristic of the new Hyundais. They are very effective and bring the car from 100-0kmph in 42.4m and 3.1s. But they tell you absolutely nothing of what's happening at the wheels. You have to press the pedal with considerable force and modulate judging by how fast things are moving around you.

The top-spec Tucson is loaded to the brim with safety features. Dual airbags and ABS with EBD are standard across the range, while the front sides and curtain airbags are available only on the automatic variants. The top-spec GLS variant is equipped with electronic stability control, vehicle stability management, hill descent control, brake assist and the auto-hold brakes. The auto-hold brakes, which doubles up as a hill-assist system, also make driving in the city very convenient. This, especially when the traffic is inching forward. When activated, the system holds the brakes automatically when you come to a complete standstill and releases them when you tap the accelerator pedal. It relieves your foot of some work without having to switch to Park each time you roll to a halt. 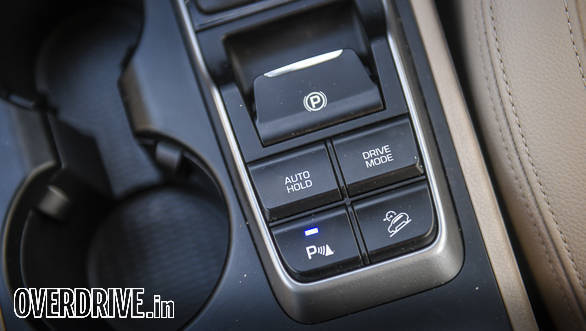 The creature-comfort list, like with all Hyundais, is quite long. You get the same 8-inch touchscreen infotainment unit seen in the Elantra, with Apple CarPlay and Android Auto. While dual-zone climate control and rear AC vents are standard on the automatic variants, we miss the ventilated seats from the Elantra. The digital display in the instrument cluster is well animated and offers a neat graphic assistance while parking with the help of front and rear parking sensors. 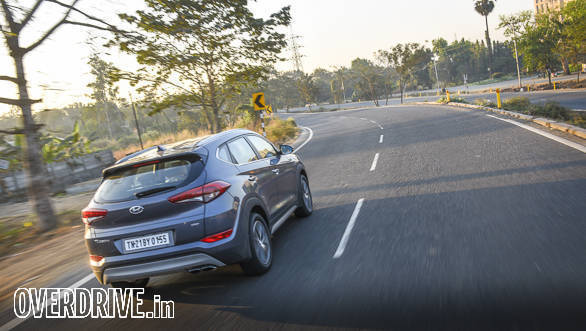 Hyundai has left us very impressed with the Tucson. It's a well thought-out crossover in every sense and keeps us hopeful that it might be just what the segment ordered to get some movement back in it. Sure, the asking price of Rs 31.09 lakh (on-road, Mumbai) might seem like a lot. But it offers the level of luxury and ability you'd expect from a Rs 31 lakh crossover. It gives you a ton of safety features and creature comforts, a powerful engine and good dynamics. To sum it up, the Tucson offers a premium experience that almost rivals European luxury cars at a comparatively affordable price.

But coming back to our initial question - does it live up to our expectations? No. It just raised the bar.