It's a bold move to make a pick-up truck the centre point of your product portfolio in India. Then again, perhaps that's the smart way for a company like Isuzu to break into our market - a new brand with a brand-new concept. Well not exactly brand new, both Tata and Mahindra have previously released 'lifestyle' pick-up trucks in India, but perhaps Isuzu finally has the right product at the right time.

It's certainly got the looks - this thing is huge! It's over half a foot longer than its only rival, the Tata Xenon, and even puts the Mercedes-Benz S-Class to shame. This makes the D-Max V-Cross quite intimidating in a crowded city like Mumbai, both to the driver and fellow road users. Watching this big machine lumber up to you in traffic certainly makes the eyes grow wide. However, the lack of parking sensors or a reverse camera is not very pleasant for the driver trying to squeeze into a tight parking spot! And don't ask me how I know that it's impossible to see a scooter parked right behind the Isuzu D-Max V-Cross. 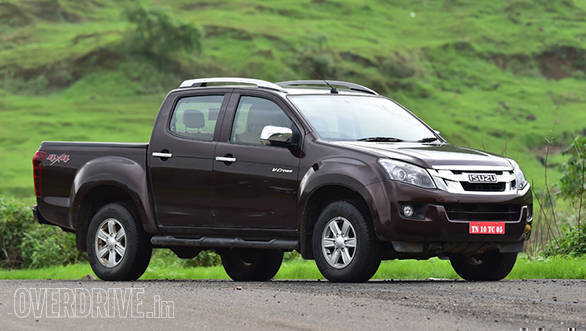 However, this vehicle was born to roam free and that shows in the rugged design cues. The Isuzu D-Max V-Cross has flared fenders, fat 16-inch rubber and generous ground clearance along with a tough looking front bash plate. More clarity on the Isuzu's intended purpose comes from the solid bar running along the side of the vehicle that doubles up as a foot board. The rear bumper looks sleek but is actually a tough metal number. Helping people identify what they are looking at is a large Isuzu badge on the front grille and even bigger lettering on the tailgate. Build quality is generally good, but there are some mismatched panel gaps on the hood and tailgate. As for the loading space, while bigger than the rivals, it's sadly not large enough to hold a motorcycle. There go all those motocross plans. 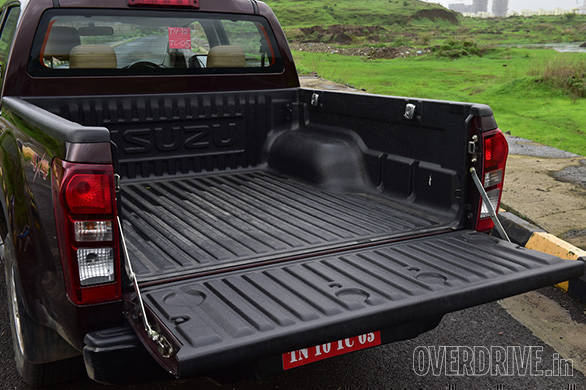 Climbing into the V-Cross reveals a comfy and well laid out cabin. Rear space is generous while the front seats are decently supportive and height adjustable. The rear bench folds, allowing the stowage of tall objects in the cabin. The concept here is to keep things simple but also reasonably luxurious.

The mix of black and beige is well executed, and the dashboard layout is simple but effective. The circular cluster houses the auto-aircon controls, and all the buttons are large and easy to use. Above this lies a touchscreen unit that offers Bluetooth calling and audio playback from multiple sources, including USB and AUX. Both the touchscreen interface and audio quality are up to par but nothing sensational. Pull-out cup holders situated just under the aircon vents are a nice touch. Both the front passengers get chunky grab handles built into the A-pillar. 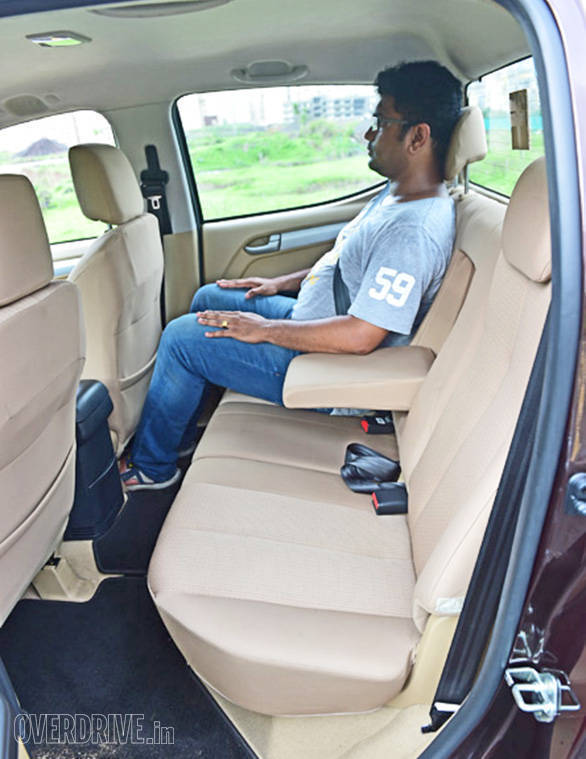 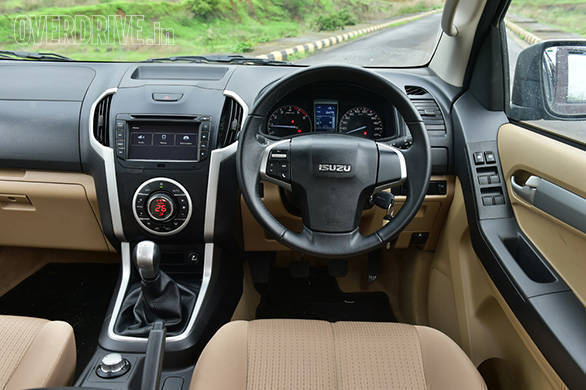 The instrument cluster has two analogue dials for the speedo and rev counter. Splitting them is a simple digital display that reads out trip data as well as instant and average fuel economy. The steering wheel also has a small selection of buttons to handle audio and telephone functions. There are some luxuries in the cabin like a button that closes both outside mirrors but don't expect Hyundai or Maruti levels of trim. You still have to press a button on the key to enter the car, the inside mirror will not auto dim at night, and neither will the lights nor the wipers turn on automatically. I also wish the doors would auto lock. Nevertheless, I quite like the balance Isuzu has found between comfort and utility. Ultimately, I didn't find myself wishing for much more, be it in terms of kit or quality. Except for those missing parking sensors, but that is strictly a big city issue!

The moment you crank the engine, it becomes apparent that this is a no-nonsense, old-school SUV. The 2.5-litre engine starts with a fairly loud but smooth note. Blipping the throttle produces a slow response but rocks the entire car gently - a tell tale sign of soft suspension and the longitudinal engine installation. Engaging first gear reveals a long lever throw and a surprisingly friendly clutch that doesn't feel too firm or long travel. Ease off the clutch and you realise that there's no need for the throttle at all; the V-Cross simply pulls ahead smoothly. In fact, this was one of the few times I used first gear on the road as the Isuzu is completely at peace with second gear starts. The low end is so strong that the V-Cross can chug up an incline in third gear at 20kmph with the engine spinning at only 900rpm! 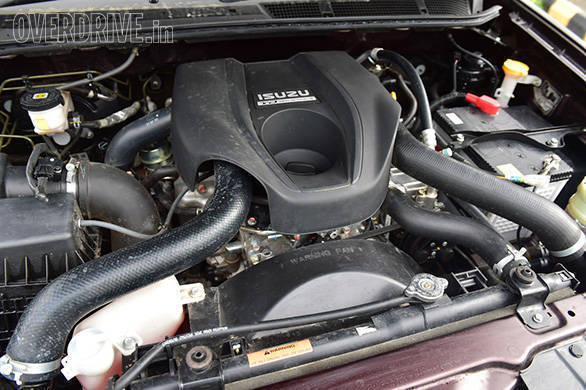 The turbocharged diesel makes 136PS and 370Nm, which aren't range-topping numbers but healthy nonetheless. Still, it's this delicious low-end grunt that makes the D-Max such a pleasure to drive. Top gear on the 5-speed gearbox is usable from above 40kmph, and you only need a downshift on the highway for urgent overtakes. 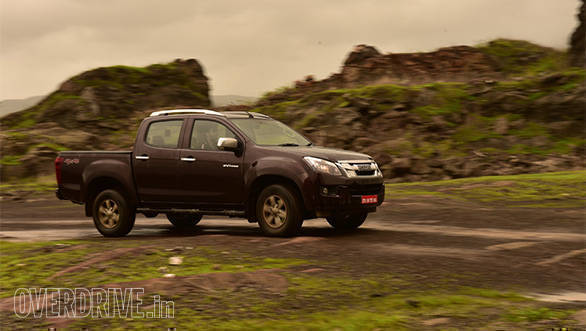 The V-Cross doesn't like to be driven hard, but our test figures revealed a decent 15.6s 0-100kmph run, if you're interested in that sort of stuff. More importantly, the strong torque resulted in an impressive efficiency of 12.8kmpl in the city which stretches to 14.4kmpl on the highway. All told, the Isuzu D-Max V-Cross engine is not massively quick but it's perfectly up to the job, and I thoroughly enjoyed it.

The V-Cross is built on a rugged ladder-frame chassis with independent front suspension and a leaf spring set-up at the rear. The chassis has an inherently soft feel that does its best to offer smooth ride quality. The V-Cross simply glides along the road with a well-damped feel. There is, however, an ever so slight, but constant bumpiness or judder that creeps in from the rear. This isn't surprising as pick-ups tend to have a bouncy rear as the suspension is built to handle full-load situations, 265kg in this case. With that considered, the V-Cross actually has a quite nice ride quality and handles bad roads well. Going through deep potholes isn't a concern but be prepared for some side to side movement in the cabin, quite like a Volvo bus. 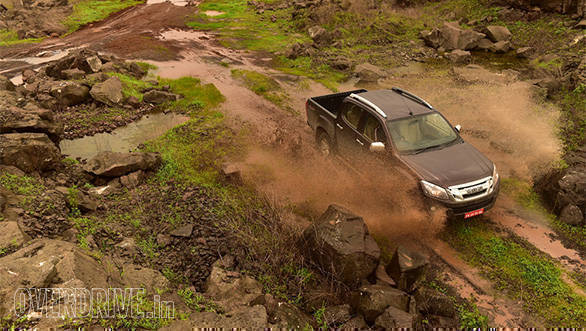 High-speed stability is good as are NVH levels. Road and wind noise aren't very invasive, but there's no escaping the diesel engine drone. You won't be surprised to read that the V-Cross is not a spectacular handler. It grips decently and doesn't get scary at any point, but body roll is very present and high corner speeds are not its forte. Instead, this Isuzu is happiest at a steady 110-120kmph cruise down the highway where it feels planted and stable. The brakes work well considering the 1,905kg kerb weight and the vehicle stays in line, but ABS gets triggered quite easily. 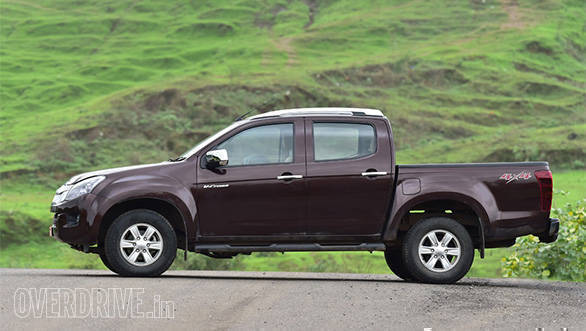 The Isuzu D-Max V-Cross does have another party trick in its shift on the fly, four-wheel drive system. The vehicle is primarily rear wheel driven, but a small rotary switch behind the gear lever can be used to engage 4WD high or 4WD low. This system came into play when we took the V-Cross into an active mine for the shoot. The path had fairly deep ruts, thanks to the constant truck movement up and down it. To make matters more interesting, the monsoon has turned the path into deep and slick slush. 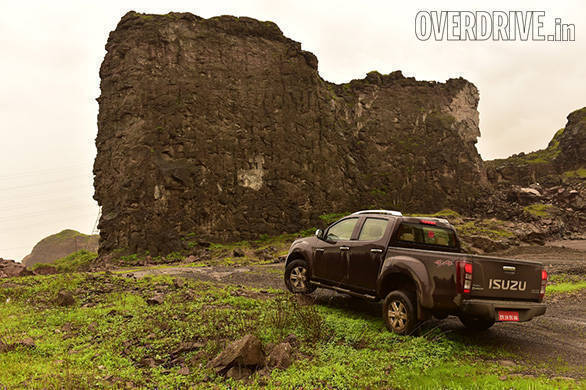 As intimidating as it looked to an off-road noob like me, the V-Cross wasn't fazed in the least. Its four-wheel drive system never struggled for traction and the low-end torque was immensely helpful. The V-Cross handled the whole stretch and whatever other light off-roading we threw at it without ever needing low ratio 4WD. Clearly, this pick-up can handle anything the typical recreation-seeking, farmhouse owning customer will throw at it. More hardcore off-roaders may find the ground clearance (Isuzu is yet to confirm the exact figure) a limitation, but there are endless aftermarket solutions available as this is a very popular car overseas.

City driving, as previously mentioned, can be a little daunting because of the size. Then there's the heavy, hydraulically assisted steering that has four full turns lock to lock and is a proper workout. The turning radius isn't great either. Despite the commanding and comfy driving position, the V-Cross is not a stress-free commuter. 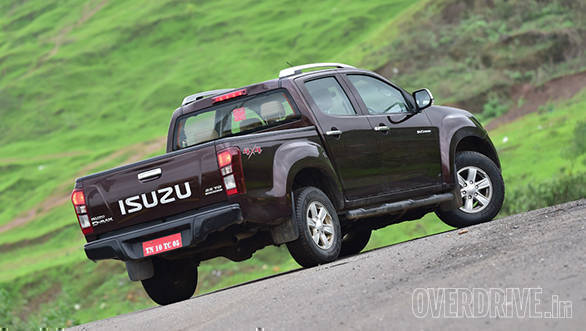 It's quite obvious that this is a really nice automobile. The Isuzu D-Max V-Cross offers an honest yet enjoyable old-school SUV feel with the conveniences and luxuries we expect from our cars today. It possess an indestructible feel along with the Isuzu diesel engine which is legendary for its reliability - HM Ambassadors owners back in the day regularly used to swap their engine for an Isuzu unit.

As a brand, Isuzu is working hard on its India presence and already has 27 showrooms in India with plans for about 45 by year end. The company surprised us by bringing down the first international pick-up to the Indian market but didn't stop there. Extensive localisation has allowed an ex-Mumbai price of Rs 12.9 lakh, and this includes dual airbags and ABS with EBD and Brake Assist. This is a fantastic price and only Rs 1.6 lakh more than the Tata Xenon XT 4x4. Add another Rs 1 lakh for the aftermarket loading bay cover and you have a massive boot that is lockable and waterproof, which massively increases the practicality quotient. Now isn't that ever so tempting!

Update: Isuzu has just confirmed that while there is only one variant available for the V-Cross, this particular vehicle has some optional kit on it. The sidebar along the body costs Rs 20,000 while the black plastic loading bay liner will set you back by Rs 25,000. The touchscreen audio system comes for about Rs 40,000 but the steering mounted controls are standard and can be synced with aftermarket systems. From our experience, both the sidebar and waterproof bay liner are worth the investment but we'd rather spend the Rs 40k on an aftermarket audio system.