It's already 6pm and has been a long day with no sign of the motorcycles. Halley and Ashok had taken the Bonneville and Street Twin on the pretext of testing and fuel-economy runs. I was assured I'd have the Street Twin back by 3pm. Before I dial Ashok's mobile number for the umpteenth time, I finally see two bright head lamps in the distance. Ashok sheepishly pulls up next to me and makes a face while mumbling something about there being dense traffic on the way.

You see Ashok had already ridden the motorcycle in Spain and couldn't stop raving about how good the Street Twin was when he came back. All of us were eager to get our hands on it. But I was the lucky one and got assigned to the story. Was it worth all the hype? Read on 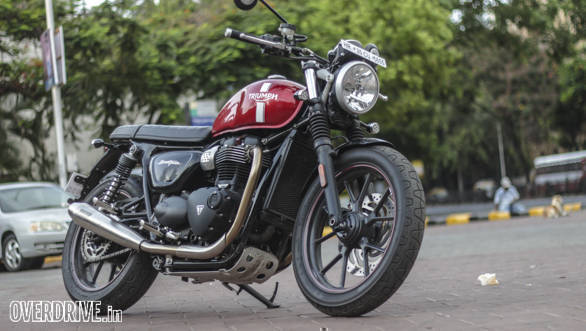 Vintage and tracker are the two words that come to mind when you look at the Triumph Bonneville Street Twin. Triumph knew that a lot of customers used to buy the earlier Bonnie and then customised it. The idea behind the Street Twin was to create a factory-built custom motorycle to which owners can add their touch with original Triumph parts. Additionally, Triumph wanted to cater to a wider audience, mostly the younger generation, who were different from the usually mature customers who buy a Bonneville. 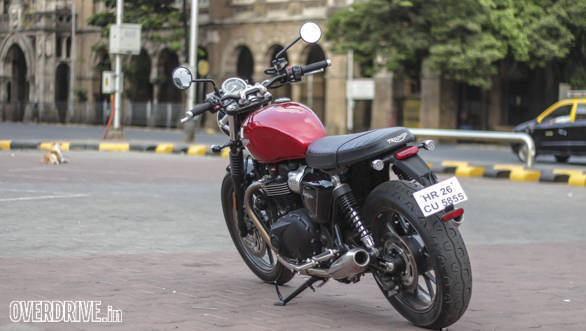 And so you see brushed aluminium detailing on the headlamp and throttle body, a blacked-out engine and features like a USB charging point under the seat. There are also various 'Inspiration Kits' to further customise the Street Twin (these LED blinkers that you see on our test motorcycle are a part of the Brat Tracker kit). Triumph unveiled the kits in India at the launch of the Thruxton R (you can read more about it on page 36). Apart from the bullet turn indicators, there is also the bench seat, aluminium sump guard, and the Vance and Hines twin exhaust system. The tail lamp also gets an LED treatment with a special light for the number plate holder. But tailoring the motorcycle to appeal to a younger crowd doesn't mean that Triumph has abandoned its roots. The round headlamp, single pod instruments and triangular right side engine cover are all a throwback to the old Bonneville. 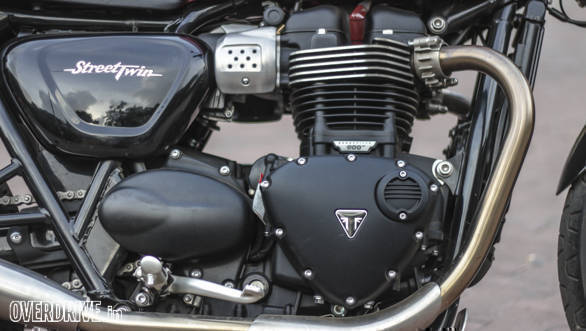 The engine is all about low-end and mid-range grunt

An all-new 900cc, 8-valve, liquid-cooled parallel twin powers the Street Twin. Trademark Triumph, this one is really smooth and has loads of low-end torque. The engine makes 55PS/80Nm  'low' figures for a 900cc motor. But if you think this has any impact on its performance,   it doesn't. At part throttle she felt a lot  like the Ninja 650; however, twist the throttle some more and you will experience major adrenaline rush as the Street Twin powers forward.

Ride by wire gives the motorcycle great throttle response. The throttle is a bit jumpy and takes some time getting used to, especially in traffic. Considering our traffic conditioning, I'm thankful that Triumph has worked on the heat management in the Street Twin. The fins, which are part of the Bonneville legacy, continue on the liquid-cooled Street Twin and help supplement the cooling function. End result? The engine doesn't heat up too much in dense traffic and your legs stay rare. 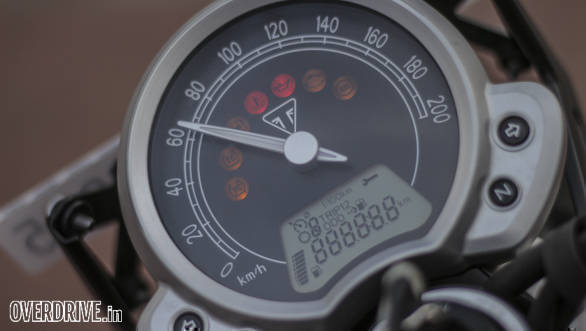 The analogue speedometer is flanked by a digital multi-information display

As for the numbers, in our performance test, the speedo nudged the 165kmph mark with clear potential for more. The wind blast because of the lack of fairing has what proved to be a hindrance. But then shooting down at high speeds isn't what the Street Twin is built for. With the new engine, more of the torque is useable at the lower end of the rev range. This helps it excel on the street with abundance of pulling power. In third gear, 30kmph is done without a whimper and so is 50kmph in fifth. The ease with which she moves from 60 to the upper reaches of her power band in top gear is something you have to experience believe. She did the 0-100kmph run in 5s, which is just shy of what others in segment, say the Kawasaki Versys 650, do. That being said, the gearbox felt a bit notchy and the clutch too was on the heavy side, but we are really nitpicking here. On the efficiency front, she managed 18kmpl in the city and 21kmpl on the highway, a notable improvement over the old Bonneville. 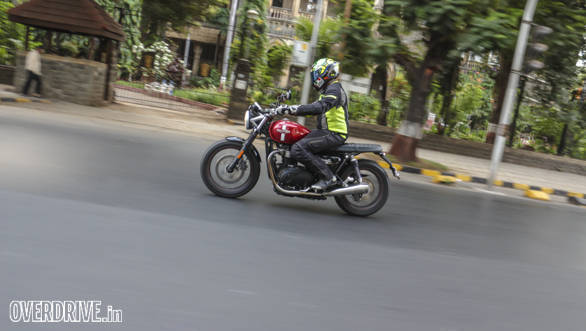 When I first rolled the near 200kg Street Twin out of the parking lot, for my 6ft 4inch frame, she proved to be quite nimble. The same feeling is carried over once you start riding. Ashok and Halley too found the motorcycle to be more manoeuvrable than she looks. In fact, she is so effortless in traffic that within no time you will be looking for gaps to squeeze her through. I could also grip the tank recess firmly with my legs, something I usually find very hard with my frame.

During our test, the weather condition changed from being hot and humid to slightly wet and more humid. This let me have some fun with the switchable traction control which lets you slide a bit in the wet, before reigning things in. The Pirelli Phantom Sportscomp tyres also help immensely in the wet. On the smooth tarmac in Valencia, traction control may have been overkill on a motorcycle which doesn't really make a ridiculous amount of power. However, the paver block roads of Mumbai demand it and prove to be a lifesaver. 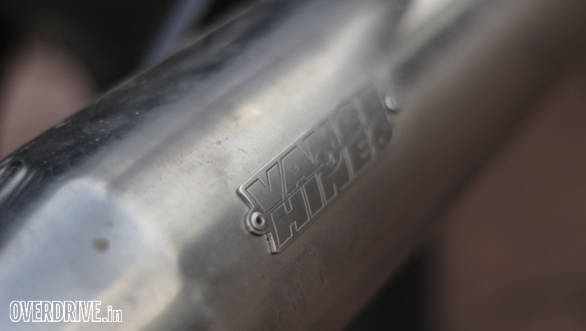 In corners, the motorcycle displayed a neutral handling characteristic. The Street Twin uses a tubular steel cradle frame and has a stiffly tuned suspension. This lets the motorcycle track a clean line around corners with no wallowing even when rapidly changing directions. This same set-up though doesn't give her the best ride quality overall. You would want it to be a bit suppler. Also, you have to be a bit careful over those monstrous speed breakers, especially when riding two up.

The riding position is a mix of sporty and outright straight back seating. The footpegs are rear set while the handle bars are slightly raised. This makes for a sporty riding posture without too much weight on your wrists. The ABS-equipped brakes are fantastic and bring the bike to a halt with no fuss or drama. The feel from the levers too is great. However, with continuous hard use, I did notice some brake fade. Also while our Brat Tracker Street Twin had a bench seat, at no point during the review or 300+km of riding, did my behind complain. 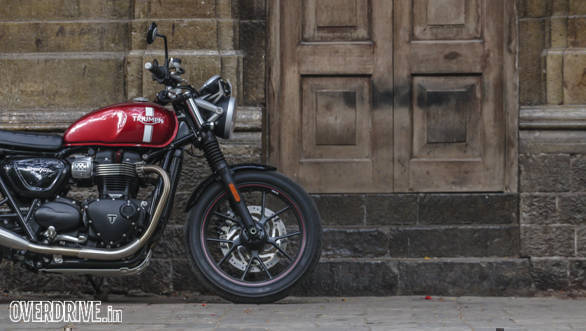 The motorcycle you see here is the kitted Street Twin. The Brat Tracker kit will roughly cost you Rs 60,000 more than the regular Rs 6.9 lakh motorcycle, ex-Delhi. I'd buy the kit only for that awesome sounding Vance and Hines exhaust system. It growls only when you want it to, making it a proper sleeper. The motorcycle in itself is also highly aspirational, one that tugs at your heart as well as purse strings with its value for money. In fact, I know many in the office who would have put their money down on one immediately. However, the fact that CBU motorcycles in Maharashtra, where we all reside, cost Rs 2-4 lakh more because of some ridiculous road tax structure is a deterrent. Time to shift to Delhi or Chennai, then. More importantly, I now understand why Ashok took his time. Once I got my hands on the Street Twin, I couldn't let it go.