We really liked the Harley-Davidson Street 750 when we first rode it in early 2014. The motorcycle dared to be different from the traditional Harley formula, and its affordable price catapulted it to the top of Harley's sales charts. Still, the Street 750 could use a bit of a polish-up. The fundamentals like the engine and chassis were good, but the brakes felt lacking and finish was iffy. You couldn't shake the feeling that the bike wasn't close to its full potential. Well, three years on, we have the first new model on the Street platform and it promises to deliver just what we longed for from the original. 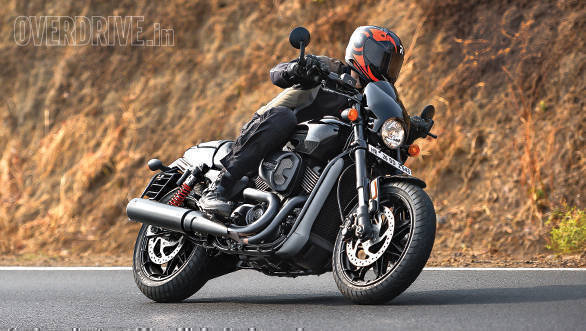 The changes that transform the Street 750 to the Street Rod go far beyond the visual. Beneath the similar but more muscular version of the Street 750s lines lie a number of changes. These function in three major departments - suspension, braking and performance. The Street Rod ditches the standard bike's conventionally mounted forks for a pair of fat 43mm upside-down units. Also new is an additional front disc brake that promises to improve the previous bike's average braking performance, and it delivers. After having spent over 200km in the saddle, it's clear that these two updates alone make it worth considering the Street Rod over the Street 750.

In his first ride report from Singapore, Shumi reported concern that the bike felt rather stiff on Singapore's smooth roads and that could be a problem here. The reality on our roads is quite interesting. This is indeed a firmly set-up motorcycle and on most roads, minor bumps and imperfections will be apparent, but not troubling. However, when the sharper, nastier bumps arrive, the Street Rod soaks them up with a damping sophistication that many of its more expensive family members simply do not possess. Poorly designed expansion gaps, eroded top layers of tarmac, large curls of tarmac, the Street Rod soaks these up without bucking you out of the seat or trying to powder your lower vertebrae. It's the kind of behaviour you'd expect from a machine with sporty but well-judged damping and I really like it.

As a result, ride quality isn't exactly plush but it's very acceptable. Handling, on the other hand, is very encouraging. The original Street 750 took a lot of lean before the pegs began to scrape, nearly 30 degrees on either side. The Street Rod adds a substantial 10 degrees of additional lean to the mix thanks to a 60mm increase in ground clearance and a solid 5-degree sharper rake angle. Cornering clearance also goes up thanks to the riding position that raises the pegs up, but not back. It's Harley's idea of a sporty position and it initially feels quite unusual, but you eventually grow to work with it. The pegs can get slightly in the way while walking the bike in traffic, but because they aren't very long, the issue isn't as irritating as in something like the Roadster. 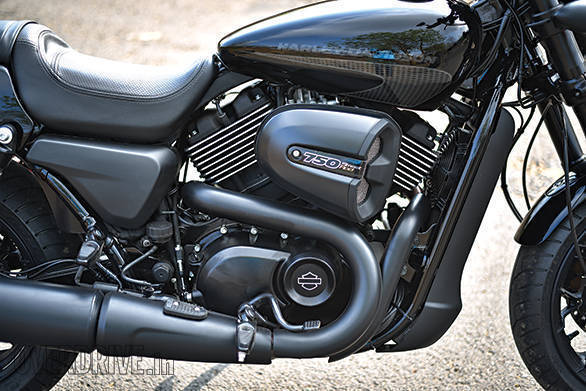 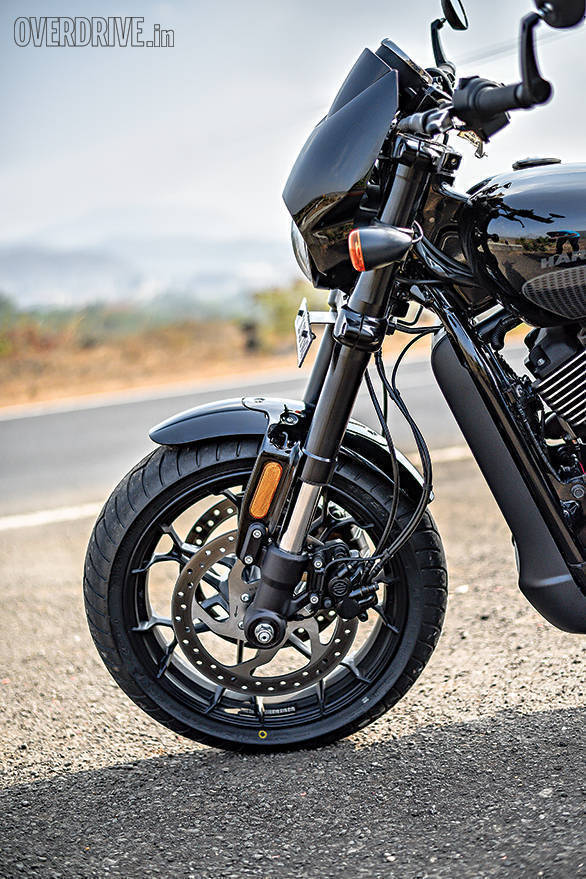 Turning the Street Rod at speed needs a firm push at the flat, drag-style handlebar, but it tips into corners with confidence. Stability is unshakable and thanks to the well-judged damping, mid-corner bumps don't generate the butt-clenching anxiety you'd feel on the average, over-damped Harley. The new MRF Revz H radial tyres are also a big step-up over the Zappers on the Street 750 in terms of grip and feel. The tyres have been upsized from 100/80-17 and 150/70-15 front and rear to 120/70-R17 and 160/60-R17s on the Rod. Fatter rubber and a better compound means increased grip, but a slimmer front tyre would have made for a more responsive front end.

While the Street Rod is perfectly happy trundling down the highway at 90kmph, it also encourages you to grab it by the scruff and have a blast on a winding road. I wouldn't be surprised to see the average Street Rod rider on a weekend HOG ride chomping at the bit to leave his more relaxed brethren behind. It's simply in the nature of the bike! However, when you need a chill, comfortable ride, the Street Rod is happy to deliver. City riding is easy as well thanks to a decent turning radius, and the low 765mm seat height. The enormous 205mm of ground clearance means giant speed breakers and potholes need no caution whatsoever. I discovered that the fat, squishy seat is great on short rides, but the softness creates some ache after a couple of hours at a stretch. Another thing worth considering is that this engine, with its higher compression and the rear cylinder's close proximity to the left thigh produces some serious heat, especially when idling at the lights.

Speaking of the engine, the Street Rod takes the likeable, liquid-cooled, 749cc Revolution X V-twin and throws in a bigger air box, new throttle bodies and a fresh 4-valve head. Compression has gone up to 12.0:1 and this raises the redline to nearly 9,000rpm. Torque climbs to 62Nm from 59Nm but it peaks 250rpm higher at 4,000rpm. Harley doesn't reveal power figures but we're told to expect a 10 per cent increase. Sound and feel at low revs is familiar, with the engine settling into a muffled rumble that an aftermarket exhaust can turn into a throaty, powerful roar. Throttle response is quite smooth at the open-close phase, but you need to pay attention to the inputs in slow-moving traffic. The Street Rod motor produces strong torque from below 2,000rpm, and the resulting surge can take you by surprise if you're not on the ball. 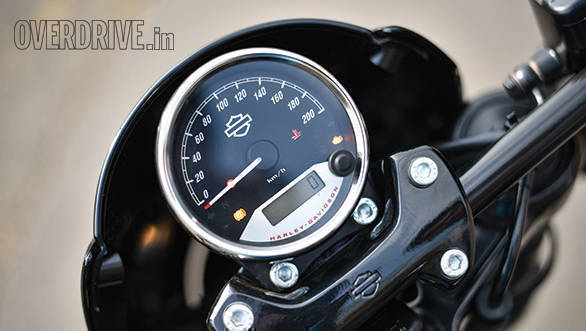 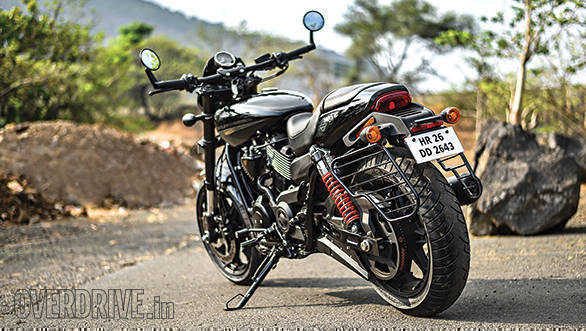 At a steady 100kmph cruise in sixth, the engine is ticking away at a happy 3,800rpm. Push it beyond this and some vibrations will set in at the handlebar and pegs. Ignore them, and you'll discover a vast amount of performance on tap. The engine continues to build power right up to the rev cutout at about 8,900rpm, and the enjoyably smooth 6-speed gearbox allows quick swapping up and down the cogs. Finding neutral at lights can be tedious though and it's easier to go down from second gear.

In our tests, we recorded a properly brisk 5.4s run to 100kmph. Keep the taps open and 150kmph arrives with ease. Given the space, crossing 180kmph on the clocks should be possible. This makes the Street Rod the quickest accelerating Harley we've tested to date. Overall efficiency is 24.2kmpl, very reasonable given the performance and 238kg kerb weight, five kilos over the Street 750.

Braking performance has seen a tangible increase thanks to the additional front disc and new master cylinder. The new forks do a great job of supporting heavy front braking, and I found my foot float to the brake pedal only for hard, emergency levels of braking. Brake force is comfortingly strong and progressive, but lever feel is still a bit wooden which makes it hard to gauge how much grip the front tyre has left. It's nice to know the standard ABS is watching your back. ABS intervention is smooth and the system only cuts in when it has to. Good to see that Street finally has braking performance that complements its straight-line speed.

Harley didn't just focus on making the Street Rod nicer to ride, it also looks much better. This goes beyond the more purposeful, attention-grabbing iteration of the original design. There's a lot more attention to detail with cleaner looking levers, well-finished rubber-topped aluminium foot pegs, and more thoughtfully routed cables and wires. The simple clocks continue and there's still a couple of rough edges like the lumpy welds at the base of the tank, but quality has taken a giant leap forward. Further, the more absorptive suspension and relative lack of engine vibrations should also serve the bike well on our roads - less chances of things going loose or rattly.

Overall, the Rs 7.41 lakh (on-road, Mumbai) Street Rod is such a substantial leap over the standard Street 750 that the Rs 1.05 lakh increment is a no-brainer. Purely in terms of being able to properly use and enjoy the motorcycle on our roads, the Street Rod is one of the best Harleys on sale today. Purists may miss the characterful chug from the air-cooled V-twins on the Sportsters, but that very charm makes those motorcycles more focussed on doing a few things very well. The Street Rod, on the other hand, has a much wider spectrum of abilities. It can be ridden relaxed or pushed surprisingly hard and it will consistently handle the worst our roads throw up. Regardless of the occasion, it will keep the rider happy and entertained. To me, that's a big win.