The Honda Africa Twin has a special mystique. I rode the old one briefly in Mumbai and it made quite the impression. And I'm honestly in love with Honda's design and look for the new Africa Twin. The CRF1000L Africa Twin is the best-looking Honda motorcycle currently in production in my book. Here's everything you need to know about the new Africa Twin before you buy one.

The original Africa Twin was born as the Desert Queen, or NXR750, in 1986 and it won the Dakar in debut and then consecutively till 1989. It formed the platform on which the production motorcycles, the XRV650 and 750 Africa Twin, were created. It was a hardcore dual sport, and the stories and legends of the original are many. 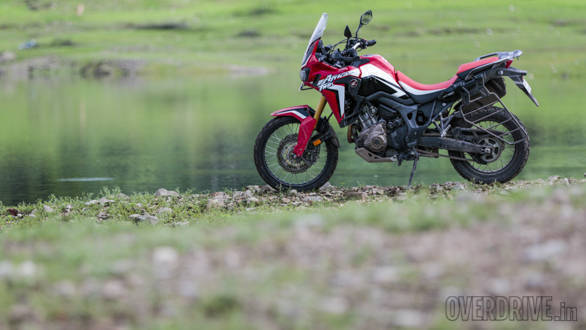 The new one follows the same path. The genesis of the CRF1000L lies in the CRF450 Rally that Honda competes - so far without a victory - in the Dakar today. Outside of the KTM Adventure series, that's a big capacity hardcore dirtbike rather than something adapted from a street bike with long-travel suspension added.

In that sense, the new Africa Twin trades in road abilities to gain back serious off-road cred. This also shows in the hardware.

It's an off-road frame

The frame for the Africa Twin is very similar to the CRF450X rally bike. It uses an aluminium semi-double cradle frame just like the racer. The suspension has 230mm of travel, the Multi' Enduro, for example, has 200mm. The CRF450, just you know, has 300mm and 315mm front and rear. The final piece of this puzzle is a 21-inch narrow front wheel and an 18-inch rear wheel, a hardcore-ish off-road selection. Honda also insists that the weight savings and easy swappability of the tubed tyres is good for off-road riders, and that's why spoked rims that supposed tubeless tyres were not used on the Africa Twin.

Some journalists were. But only initially. The Honda DCT is a simple transmission in execution and how you interact with it. The bike goes into neutral when you rock the right-hand side rocker switch to N. It also does when you use the side stand automatically if the engine is running. The same rocker also rocks to the right to select D or S riding modes. D is a near-somnolent riding mode that maximises economy. Honda says as much as 400km or more should be possible on an 18.5l tankful in D mode. 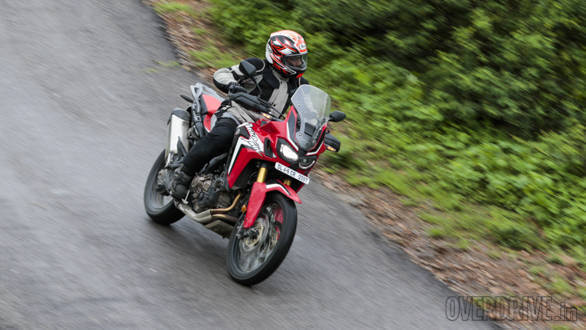 The S (for Sport, I think) is a set of three increasingly more aggressive riding modes. You rock and hold the switch to select between them, and the motorcycle remembers them. In essence, the S1 to S3 selection changes the shift pattern to hold each gear longer for a more aggressive ride feel.

At the very bottom of the left switches are + and - buttons that allow you at any time to alter the electronic gear selection if you want to. In D and in S1, I often felt the need to downshift a little bit earlier into corners than the DCT would on its own. Gears change instantly and even multiple downshifts happen rapidly.

An A/M button below the ride mode selector allows you to switch to completely manual gear selections if you want. I tried this for a short while and gave up on it. Because the DCT, especially in S2 and S3, always had the right gear selection and I rarely felt like I could improve proceedings. 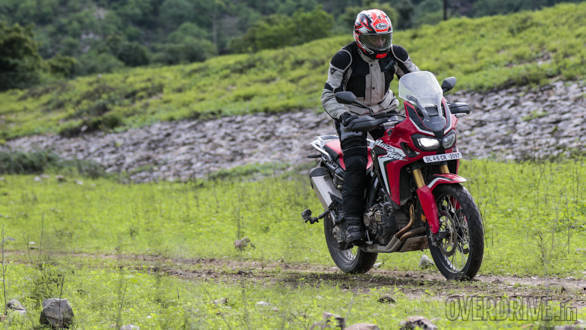 What gets confusing is the left switch cluster. Which, apart from the gear selection buttons, also has the indicators, horn and a low-high beam rocker with a spring-return switch for passing people. The traditional pass switch controls the three-level traction control system (HSTC, or Honda Selective Torque Control) - it also turns completely off.

Luckily, Honda places the G (gravel) and ABS Off (rear only) switches on the dash beside the lovely meters. The latter, obviously, can only be selected after you stop. The rest all work on the fly.

The traditional clutch lever is replaced by a parking brake, not unlike a scooter's and this lever is placed far away from your hand, so you still get a traditional foot-operated rear brake. The left foot has no job unless you purchase and add the accessory gear lever - which works more or less like a bi-directional quick shifter.

At the end of the day, you learn how the transmission works and how you are supposed to interact with it quite rapidly. It does feel odd to ride a bike this size with an automatic transmission, but the Africa Twin's abilities are not hampered by the transmission in any way. It just needs you to bring an open mind and be prepared to learn a new way to control the engine speed.

The Honda Africa Twin is a compact motorcycle by adv standards and that's an asset. It feels skinny to sit on and the seat height at the low position is an amazing 825mm which means most people will find the Honda easy to get on with. The non-adjustable screen does a good job of keeping the wind off you, though I suspect that hardcore off-road guys will probably want a smaller screen to improve visibility.

The ergos are clearly designed for sitting as well as standing up riding, and the seat is a firm unit that I think will work very well for hours of riding.

The set-up is soft like a dirtbike by default. That means while the Africa Twin is a controlled ride, there's quite a bit of pitching on acceleration and braking, and it sorts of bounces softly on its suspension over roads that climb up and down or have crests and troughs. 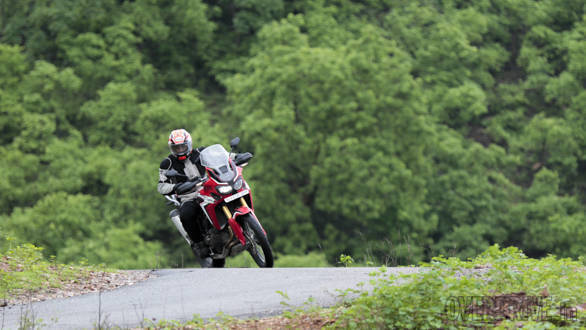 Luckily, the suspension at both ends is adjustable and if my riding pattern was road-biased, just adding some compression, maybe a hint of rebound, will immediately produce a more road-focussed, feelsome motorcycle.

The 21-inch front wheel does rob you of some road feel, and the Africa Twin will never corner like say the Multistrada can with its 17-inch wheels but then again, the Ducati isn't even in the ballpark when the road ends.

The 21-inch front wheel explains itself when you finally get off the road and into looser stuff. Here the long travel, the soft set-up and the linear power delivery really do come together. The DCT needs a bit of learning and trusting but after a while, you realise that the Africa Twin's compact dimensions and lightweight feel make it, literally, a large dirtbike. Serious off-roading, jumps, slides and all that is just a tyre swap and a skilled rider away. 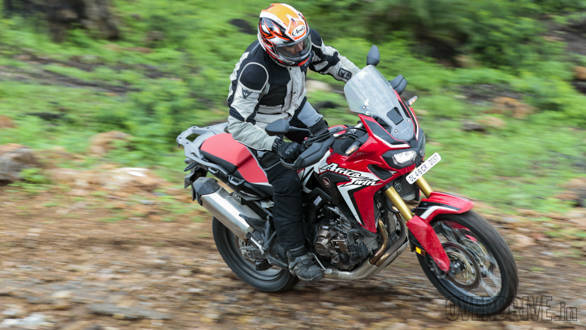 My ride in the dirt was short - I ran out of talent and dropped the bike on my foot. But it was enough to show me that there's a serious dirtbike in the soul of the Africa Twin. And it's intrinsic to the design and engineering in a way that the extremely large Multistrada Enduro or the 19-inch front-wheeled Tigers can never hope to equal.

Do note that the stock bike wears a road-biased big block tread tyre and the bikes in the promo videos for the Africa Twin boast proper off-road tyres.

In the daily running

The big Activa jokes are funny but they're closer home than you think. And it's impressive rather than funny. On the way from the off-road track to our hotel, I was riding the Africa Twin with a throbbing right foot. I hadn't discovered yet that I'd sustained a small fracture. I needed the Africa Twin to do the heavy lifting for the 12-odd km of city running through unruly traffic and potholes. 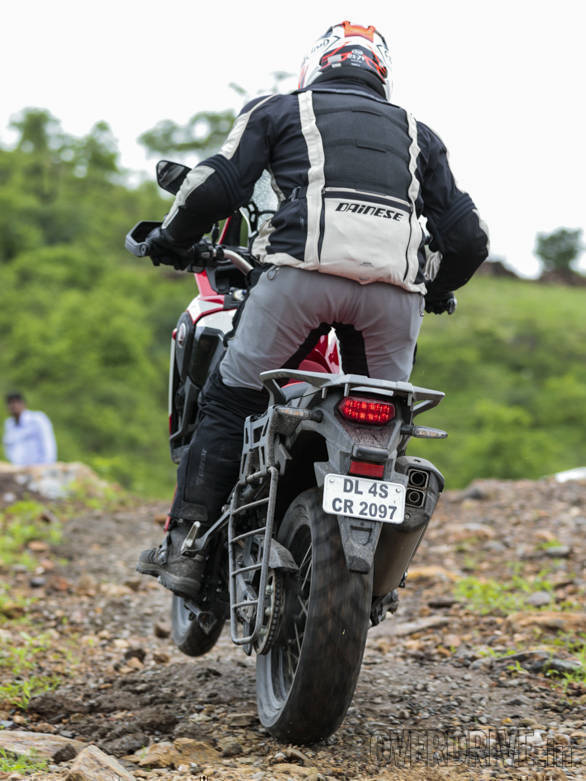 I found that D and S1 modes do a fantastic job of allowing you to ride strain-free. The Africa Twin also vents heats from two outlets on the side under the Honda logo on the tank. Not much of this hot air ever reaches you, so you can ride in slow traffic without tandoorifying your legs.

On the other hand, the 998cc parallel Twin puts out 88PS at 7,500rpm and 91.9Nm at 6,000rpm. It sounds and goes like a modest engine but it's quite rapid because the torque curve is fat and flat. Top speed is claimed to 190kmph and it goes quietly and smoothly into a steady 120-130kmph cruise.

I love it. The Africa Twin's design is beautiful. The half-round LED headlights remind you just enough of the old bike, and I do wish both beams were on all the time. But I cannot stop looking at it. Under the skin is a friendly 98PS engine that works well whether you're trundling through the city, crushing the highways or getting your jollies in loose stuff. This is a big comfortable motorcycle. Some of the details like the instruments look great while others, like the surfeit of switches, need a moment to get used to.

Then there's the fact that Honda is assembling the motorcycle in India which allows them to price the Africa Twin at Rs 13.67 lakh ex-showroom which is excellent pricing despite the DCT being standard shipment. Indeed, I wish Honda would also sell the cheaper and easier to accept manual version and expand the range. And I also want the silver and white colour schemes, Honda.

But don't rush out with the cash just yet. There's one proviso that you should think about before you splurge on the Honda. The Africa Twin is the most focussed (on off-road performance) of the adventure tourers on sale in India. If you're often in places where Narendra Modi hasn't (re)built a road yet, the Africa Twin is manna from heaven. It'll do Ladakh and other such unpredictable adventures easily.

But if you mostly ride on road and see adventure tourers as big comfortable machines that go fast and corner hard, then the Africa Twin could be a little too focussed for your liking.