What's better than being on the road on your birthday? Being on the road, driving a very nice car is what. I'd always wanted to drive a vRS-badged car, and with the old Octavia RS going out of production long before I even got my driver's license, I greedily piled to do the review of the new one. After all, it was my birthday and I could do what I wanted (heh heh). I got a very, very short stint in the car at the launch event, but that was far from enough to satisfy my cravings. So, did I have a happy birthday?

I'm not a fan of how the standard Octavia's front-end looks after the facelift -- something about it just didn't look as nice as the pre-facelift model. But on the Skoda Octavia RS, I love it! And that's only got to do with the new bumper it features. It's lower and looks more aggressive which suits the new split headlights far better than the standard Octavia's simple straight bumper. The RS also gets new 17-inch wheels which look pretty sweet I think, and while the larger wheel options available internationally look so much sweeter, they wouldn't make sense here with our terrible road conditions. At the rear is a new bumper, twin steel-tipped exhaust pipes and a small spoiler, all of which perfectly wrap up this sleeper design. 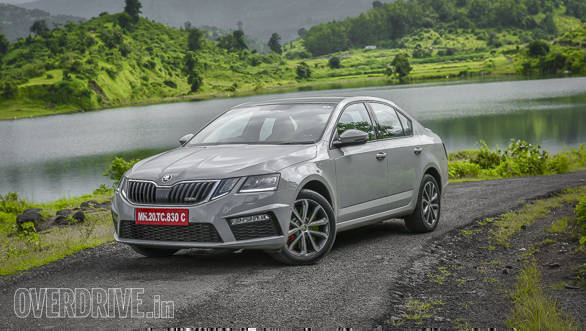 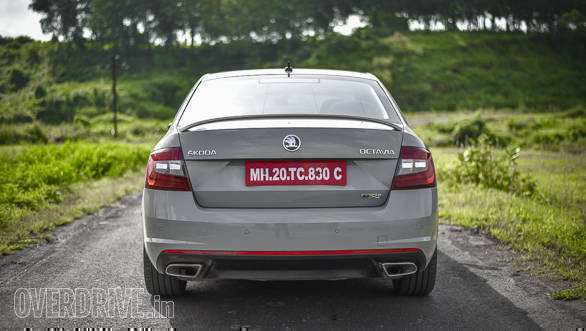 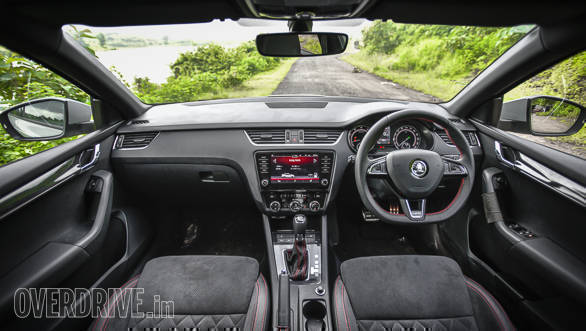 The interior of the Skoda Octavia RS 230 looks a bit sportier than the outside thanks to the all-black dashboard, Alcantara leather-wrapped sport seats 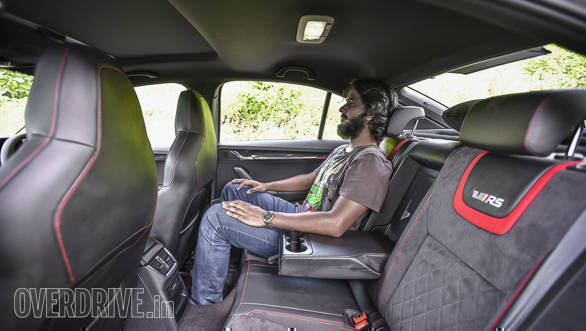 While there's plenty of knee room at the back of the Skoda Octavia RS230, the seats could have done with more under thigh support

The interior however looks a bit sportier than the outside thanks to the all-black dashboard, Alcantara leather-wrapped sport seats with the vRS badging and the red contrast stitching. The sport seats are super comfortable and really hold you in place when you're chucking the car around corners. While there's plenty of knee room at the back, the seats could have done with more under thigh support. But if you're like me, you probably don't care that much about rear seat comfort. You'd be more interested in what's under the hood. So I'll tell you.

Until now, the enthusiast's Skoda Octavia was the one with a 180PS 1.8-litre TSI engine. And it's not just because of the lovely engine. It had a different suspension setup compared to the 2.0-litre diesel and 1.4-litre TSI variants -- a multi-link setup at the rear as opposed to a compound link crank axle (a more advanced version of a torsion beam setup). The Skoda Octavia RS takes both of the positives a notch, maybe two notches above! Starting with the engine, Skoda has plonked a 2.0-litre TSI engine which produces 230PS of power and 350Nm of torque. It's also got a 6-speed DSG unlike the 7-speed unit in the standard Octavia. Would the 245PS version sold in Europe been nicer? Sure. Who doesn't like more power. But our guess is that you'll probably need to run it on at least 97 Octane fuel, which is a pain to find even in cities like Mumbai. 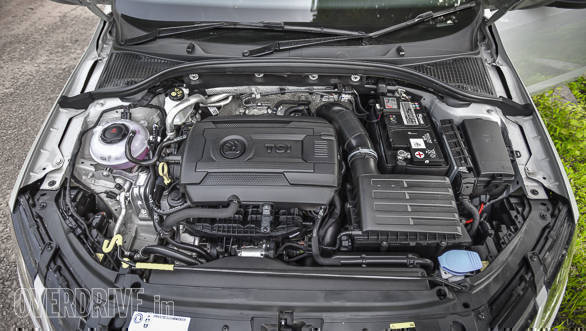 Skoda has plonked a 2.0-litre TSI engine which produces 230PS of power and 350Nm of torque in the Octavia RS230

But needless to say, 230PS certainly doesn't feel lacking. 0-100kmph came up in a quick 6.7 seconds in our test (Skoda claims 6.8 seconds, heh heh) with the help of a very effective launch control system. The engine, like with almost every TSI engine I've experienced, charmed my socks off. It's crisp, free-revving and super linear. No need to carry can an extra set of pants then, because you won't be wetting yourself. This, thanks to the very wide torque and power spreads -- 350Nm from 1,500-4,500rpm and 230PS between 5,500-6,200rpm. 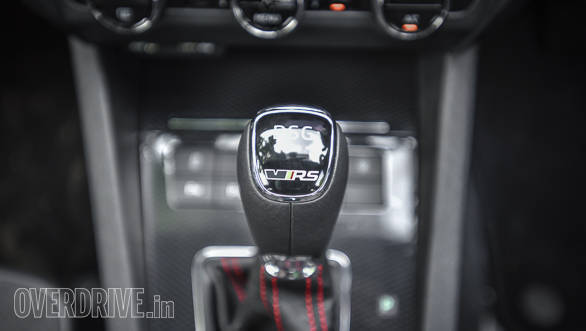 The DSG transmission of the Skoda Octavia RS 230 is quick, it's responsive and doesn't once leave you wishing for a manual

Oh, but let's not forget that gearbox -- the silky smooth, lighting quick DSG. Would a manual transmission have been nicer? Sure, in ideal conditions. But if this is going to be your daily driver, you'll probably find yourself in conditions far from ideal most of the time. With the DSG, you get the best of both worlds. It's quick, it's responsive and doesn't once leave you wishing for a manual. While in the regular Drive mode, the gearbox upshifts as early as possible to keep the revs down and efficiency up -- the Octavia RS returned 10.38kmpl in the city and 14.04kmpl on the highway, which I reckon, isn't bad for a 230PS 2.0-litre turbo-petrol. But this never leaves you bogged down, because almost as soon as you jab the throttle, it drops a gear or two and starts surging ahead rapidly. Slot the gearbox in Sport mode, and the system won't let your revs drop below 2,100rpm while upshifts are almost always at the redline, depending on your throttle input. But what I really liked about the gearbox is that it isn't over cautious and allows you to downshift quite aggressively. The Octavia RS has also got this really delightful, raspy soundtrack too, with a nice braap when you upshift at high revs. 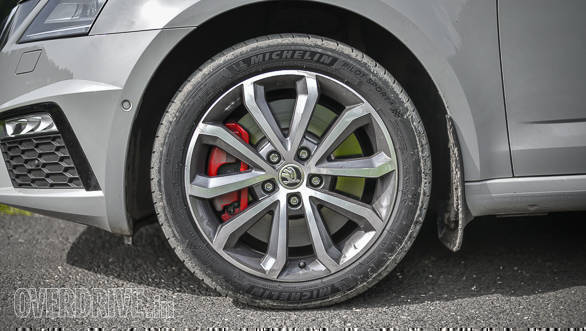 But you'll be hearing all of that only at lower speeds. Because once you're doing around 100kmph, which is around 7 seconds after you floor it, there's quite a bit of road noise from the Michelin Pilot Sport 4 tyres, which drowns out the music. That said, I'd rather live with that than a set of tyres which squeal almost every time you throw the car into a corner -- something these Michelins hardly ever do. Even off the line, these tyres do a pretty good job of putting 230PS of power on tarmac with almost no drama. But what also plays a part in that is the Octavia RS's limited-slip differential. The LSD also features a piece of tech which Skoda calls XDS+. When this system detects a G-force of over 0.15G (usually while in a corner) it applies just enough brake force to the wheel on the inside of the corner thereby creating some resistance. As a result, the LSD does its thing and sends more power to the outside wheel, where it detects less resistance, thereby creating a sharper turn in. When you throw this car into a corner, this system pulls it inside towards the apex, rather than sending it into understeer and pushing it wide. To some extent, you can actually feel this happen. The result is a razor sharp, super agile car. It really doesn't feel like a 4.7m long car! 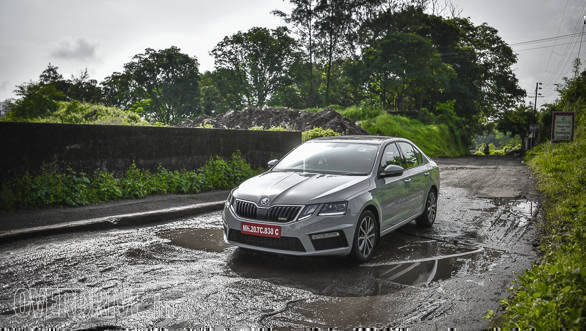 Also playing an important part in this is the suspension. The car uses the same suspension components in the standard 1.8 TSI Skoda Octavia, but with a different setup. Ride height has been dropped by 15mm and the damping has gotten firmer. However, Skoda says that the setup isn't identical to the Europe-spec car and that it's been made to be India-friendly. Thankfully, unlike the Volkswagen Polo GTI, it isn't so India-friendly that the sportscar experience is diluted. Body roll is almost non-existent and you feel just as comfortable carving up some winding roads in the Octavia RS as you would flooring it on a flat stretch.

At the same time, it isn't uncomfortable or impractical to use. The whole time I had it, I never scraped the car on a speed breaker, and without even going crisscross over them. I just had to bring it almost to a halt and cross the speed breaker. A bit annoying at times, but not as annoying as taking up the whole road trying to go crisscross. And unlike a lot of sportscars, you're not constantly sitting at the edge of your seat as you drive, looking out for pot holes and ruts that could potentially cause a flat or a break your back. While the tyres are on the softer side, the 225/45 section dimensions mean you don't have to worry too much. This, along with the slightly India-friendly suspension setup soak up the small ruts and holes on the road pretty well. Although, there is quite a bit of movement in the cabin over the larger ones. What all of this means, is that you're never tired while driving Octavia RS, just smiling. 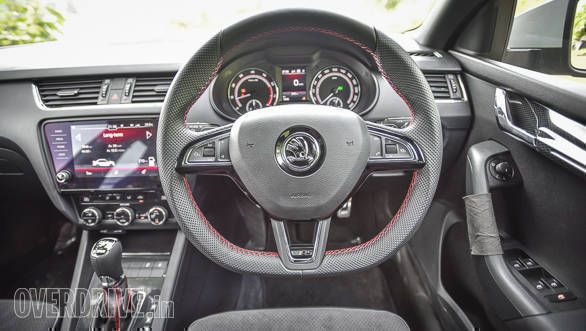 While the electrically assisted steering is quick and responsive, it lacks a certain crispness and precision you'd expect from a sportscar

But there is one problem with the Skoda Octavia RS, a proverbial chink in the armour -- it's steering. While the electrically assisted unit is quick and responsive, it lacks a certain crispness and precision you'd expect from a sportscar. The unit still feels like the one from a standard Octavia, which is passable for a regular car. But for a sportscar that checks almost all the other boxes, it's a bit disappointing. 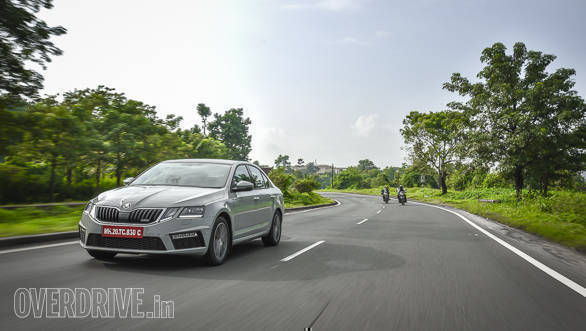 No. But that's only because I was sad that the car had to go back. I spent two days with the Skoda Octavia RS, and I had an absolute blast driving it everywhere! It's perfect in almost every way. And it costs Rs 24.62 lakh, which I think is a steal for an almost-perfect 230PS sportscar! In fact I'd even go so far as to tell you to forget the standard 1.8 TSI and just buy the RS. It really is that much better and worth the extra 6 lakhs. It's good-looking, fast and an absolute hoot on a mountain road. Buy it, I say! I know I would.