Triumph turned a corner with the new Bonneville line. It created a well-spaced out range of retro-themed motorcycles. It also added at the very top, a layer of motorcycles that filled out established niches with elan. One of those is this, the Triumph Thruxton. The other is the Triumph Bobber which is set for launch in India shortly. In India, though, we do not get the base model of the Triumph Thruxton, we only get the all-singing, all-dancing Triumph Thruxton R. The niche it occupies so rather fetchingly, of course, is the cafe racer. 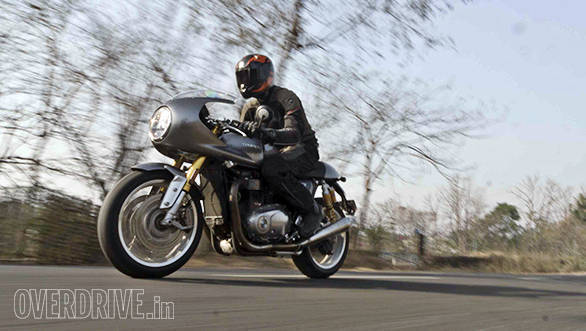 The original cafe racers of yore are looked upon with a great deal of affection. And some of it, I will admit, is deserved also. The idea of taking a motorcycle, stripping it down to the bare essentials and then adding or changing bits to enhance speed are all things that we do even today. Along the way, the form of the motorcycle became refined and if you look on the Internet today, the chaps at Bike Exif actually have a guide to how the proportions are created so that the look of the cafe racer could be fool-proofed.

Not that the chaps at Triumph's design team needed that guide. Because the Triumph Thruxton R is the OVERDRIVE Design Of The Year 2017. And it deserves that accolade because it's unquestionably amongst the most proportionate, classically good-looking motorcycles to come out last year. As someone likes to say a lot, "simply beautiful".
And it isn't hard to see why everyone, in the know or lay person, smiles when they see the Thruxton. The sweet shape of the long tank, the black side panel with its minimal add-ons and a dinky little tailpiece is a charming silhouette. The curves are very much at odds with the modern ability to stamp metal into the hardest of shapes and create the sharpest of edges. The curves and the impeccable proportions make the Thruxton look extremely, extremely handsome. 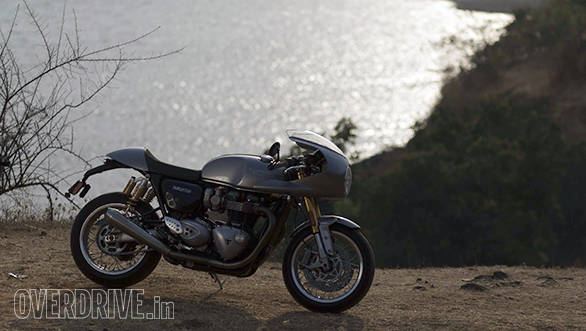 The Thruxton R is a gorgeous motorcycle

I only know that because I have actually seen the stock motorcycles. Unfortunately, the press test bike in India comes wearing the Track Racer Kit, as Triumph calls it. This includes the Vance & Hines exhaust, the fairing, compact lights and a clean-up of the rear of the motorcycle. I say unfortunately because that makes this test bike ?15.99 lakh on-road Mumbai in test trim - expensive.
On the other hand, I cannot honestly say that you shouldn't think of the Track Racer Kit as an optional item. The amount of gear you get for the money makes it extreme value for money.
And it is, very much is, a great addition to the styling of the motorcycle. Because the fairing completes the look brilliantly. The proportions are impeccable and the completed look is most excellent.
Of late, you cannot mention Triumph without talking about the attention to detail. Which the British manufacturer is currently doing very, very well. 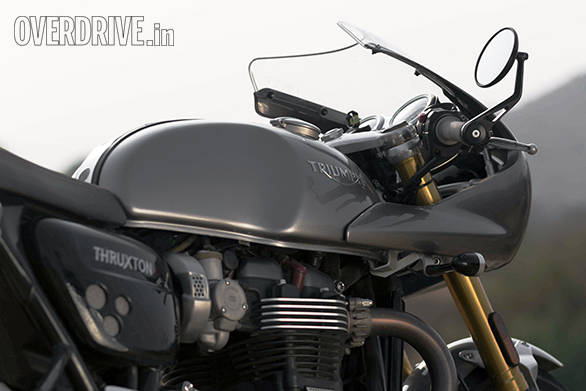 On the Thruxton R, for example, this extends to the polished upper triple clamp. To the flip top gas tank cap, which has a lockable cap underneath it. Of course, Triumph has to go and claim that this is the first "Monza-style gas tank cap on a production bike in the world." I'd roll my eyes if they weren't glued to the rest of the motorcycle. Then there are the shaped throttle bodies - that mimic carburettors.

And then of course, this is the R, not the basic motorcycle. That means that as much as the top half of the motorcycle is full of delicious lines, the bottom is festooned with delicious equipment. So the front brakes are the distinctive silver of Brembo's vaunted monoblocs. There is the gold of the fully-adjustable Ohlins suspension units. It makes the Thruxton R look both magnificent in design and in intent.

Intent. That's an interesting word when it comes to the Triumph. Because they have a 270° parallel twin that displaces 1,200cc and has all the equipment it needs to be a striking 140-150PS motorcycle. But intent. Triumph always intended for the Thruxton R to stay connected to its retro roots. And hence, the power is designed to be impressive but not outrageous. And that is what the Thruxton R is. 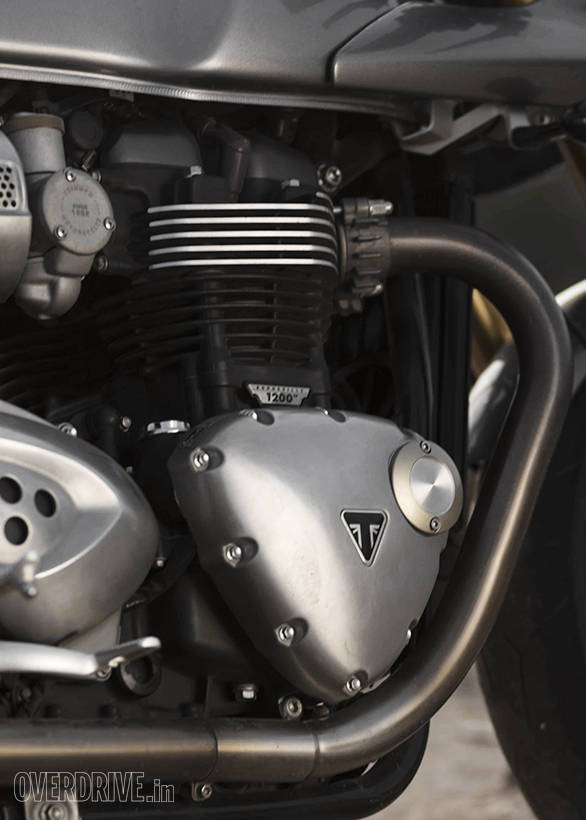 Torque off the bottom is as robust as we have come to expect with all of the new Bonnevilles. Peak torque is 112Nm, but it arrives at just 4,900rpm. Power, again, is modest. The 97PS arrive early, at just 6,750rpm. If you haven't been out riding something this single-mindedly retro-flavoured, the Thruxton R initially feels like it is in learner mode - capped somehow. Progress is smooth and the torque flows smoothly across the rev band. But it takes a moment to get used to the relatively low redline and settle into the rather lovely groove that this motorcycle has. 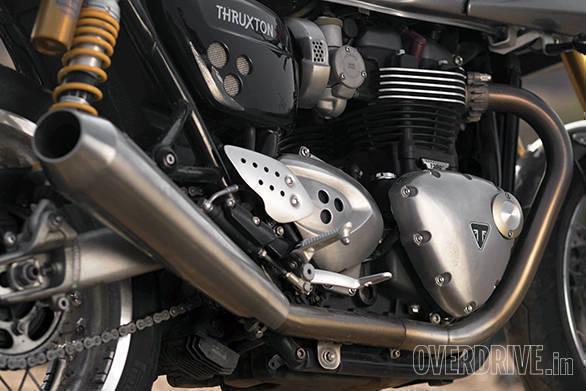 Shift up at 5,000rpm and you hear a muted growl from the Vance & Hines' and the Thruxton gets to 150-160kmph with relative ease

The way to ride it is to shift up at 5,000rpm, roughly. You hear a muted growl from the Vance & Hines' and the Thruxton gets to 150-160kmph with ease. But trying to ride it hard, using all the revs is rather unproductive. The motorcycle rather quickly reveals that this isn't the way to ride it. The fact that cheered me up was that unlike the T100, the suspension on the Thruxton R is extremely capable. It doesn't ever feel out of its depth - and we shall come to that.

So numbers. The Triumph Thruxton R is a reasonably quick motorcycle posting a 0-100kmph time of 3.9 seconds. It is a motorcycle that will spend a lot of time in the city and the economy it returns is 13.4kmpl, acceptable. Out on the highway, this jumps to 19.8kmpl. Which means overall economy is 15kmpl.

But what do I mean when I say it will spend most of its time in the city, then?

That is because the  Triumph Thruxton R cannot be ridden for long stints in the saddle. Unless you are hardcore, like pain or are otherwise nuts. Because the bars are low - I believe the Track Racer Kit also lowers the clip-ons further. The feet are placed rearwards and not unreasonably high. But the long tank means you will have to reach forward quite a way and that's hard to sustain.
Rishaad (6'2") and I (6') both also ran into issues with the knee recesses. If we fit our knees into them, we had to sit so far back as to be extremely uncomfortable. It we sat in comfort, our knees would be on the crease and that hurts. Especially when you hit the brakes. 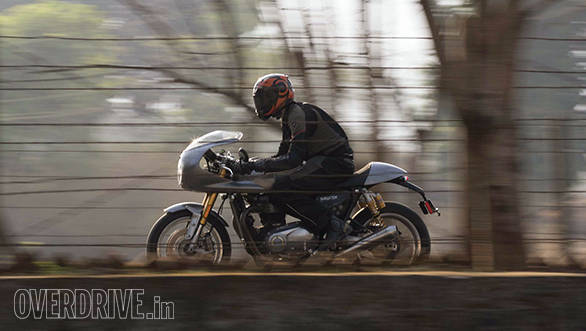 But that's the little niggle, all told. Because the rest of the package works as the Ohlins seems to be able to manage. Big bumps do get transmitted to the rider because the travel is limited but I assume that the adjustability of the suspension should give the rider some ability to make the Thruxton R ride more lightly over the harsh stuff India throws at vehicles.
Handling, again, is retro-flavoured. Turn is in measured and the motorcycle responds accurately to inputs but never feels hurried or rushed. The long wheelbase and the excellent Pirelli Diablo Rosso Corsa tyres make for a sticky, confident motorcycle at high lean angles. You can play quite hard with the Thruxton. 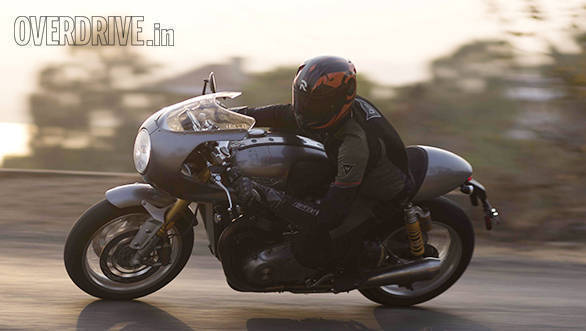 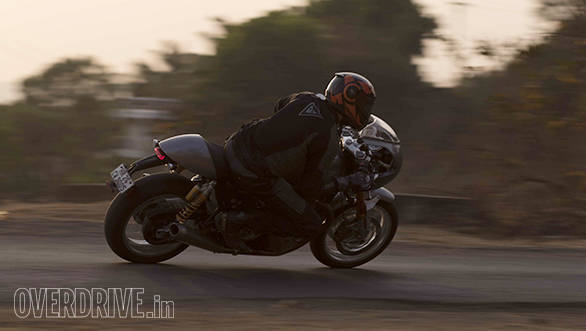 This is a ride-by-wire motorcycle with riding modes and traction control. I found it hard to get traction control to intervene on public roads because of the tractable, controllable nature of the power but it can feel heavy handed when it does have to intervene. The brakes are excellent in feel and power and once again, the feel is assured and measured and it fits the motorcycle rather well.

The Thruxton R is a fitting flag bearer for the Bonneville line, to be sure. As cafe racers today have to do, the form dominates function and the Thruxton R is magnificent to look at and impressive to ride. The limiting factor will be comfort because no matter how young or fit you are, the Thruxton R is hard to take for long rides. I would say that you should get the Track Racer Kit because it does add significantly to an already extremely beautiful motorcycle. 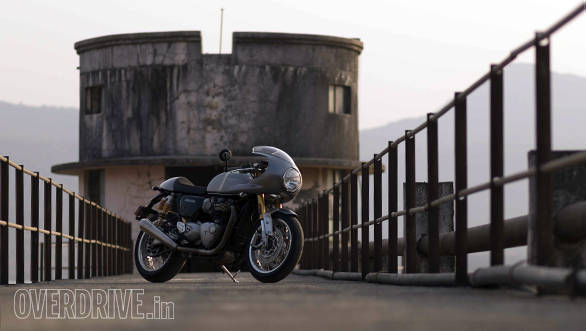 But at ?16 lakh, approximately, on-road Mumbai, the Thruxton R is an expensive purchase. My issues with it stem from a very simple question. Here is an expensive, delicious motorcycle with a relatively limited application as it were. Could this be your only big motorcycle? Because as a second motorcycle, one that fits a mood, a short ride and a specific flavour, you'll hardly find anything better.