We are in for a really hot summer and when we set out for this drive, it was a blistering 38°C even on top of Lonavala - a hill station that's a favourite amongst tourists from Mumbai and Pune. Lonavala also offers deserted, fast, winding roads beyond the touristy spots and it's a great setting for driving a fast car. And the one that we took there is certainly hotter than even our 'hottest summers'. Yes, in this case, it was the Audi RS5 coupé. In the arid landscape that is typical to this region in the dry season, the shiny red RS5 stands out remarkably, despite its subtle looks. 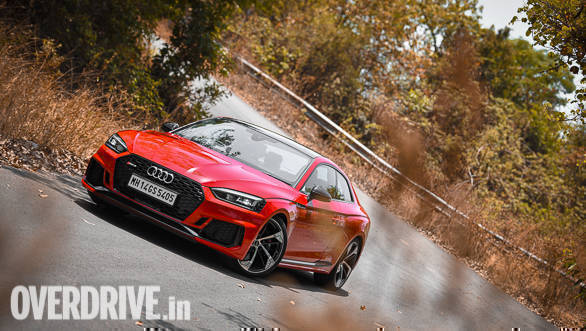 Compared to the Audi S5 coupé that it builds on, the RS5 gets the usual paraphernalia of a sportier variant - larger air-dam, wider grille, a chin spoiler up front, and a prominent body kit including side skirts and air diffuser and also larger wheels and brakes. The Audi RS5 also has little grooves around the outer edges of its headlights and taillights for better aero performance - but these appear more inclined towards form than function. The Audi RS5 also comes with an edgier surfacing for the apron and the haunches are more muscular with accentuated wheel arches that acknowledge the boxy but iconic yesteryear quattro cars. Interestingly, Audi RS5's wheel arches are 19 mm broader than the base A5! The bezels for the grille, the sleek chin and lip spoilers and the chunky diffuser are all done up in glossy black and create a stunning contrast with the shining red body colour. Possibly I have a thing for fast bikes and cars done up in red and black, and maybe that is why the Audi RS5 appeals so much. The RS5 logos are in all the usual places on this Audi- like the grille and tailgate, and also in some unusual places - like the fuel filler cap. If your fuel attendant notices it and recommends higher octane fuel or supplements, tip him well. 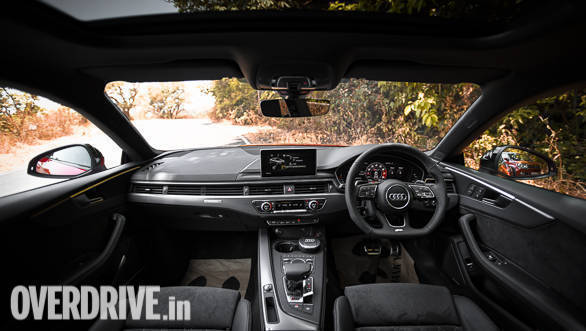 You will find more of these badges on the flat-bottom steering wheel, the fully digital instrumentation (or Virtual Cockpit) and the leather on the sports seats. Open the door in the dark and a puddle light welcomes you with the new 'Audi Sport' logo - reminding you that quattro GmBH (the performance arm at Audi) is now Audi Sport GmBH. This division is headed by the flamboyant Steven Winkelmann, and you will be happy (or unhappy?) to know that the RS5 isn't even remotely manic like the cars that he green-lighted at Lamborghini. The RS5 is a typical Audi in its razor-sharp design, impeccable workmanship, and measured performance. 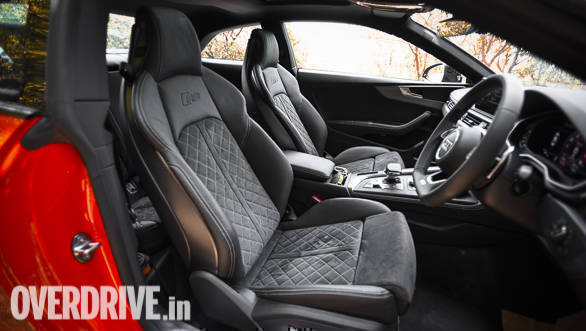 The cabin does look a bit too S5 in my opinion and I would have liked better headroom or a lower H-point in the driver's seat for easier ingress and egress, making it more suitable for an everyday sports car. The rear seat is a bit roomier in comparison to the outgoing, first-gen RS5, but it's still good enough only for kids or teenagers. But rear-seat passengers do have shallow cubby holes on either ends for knick-knacks or smaller phones. Chances are that all that stuff will stay in place, for the RS5 isn't as tail-waggy as its direct rivals, the BMW M4 or the Mercedes  Benz AMG C63.

That precision and rear-end grip of the Audi RS5 is thanks to the quattro performance all-wheel-drive setup which ensures maximum grip and its ability to transfer 75% of the power to the rear wheels. The quattro drivetrain gets its fodder from a new 2.9 litre V6 petrol engine that replaces the grunty 4.2 litre V8 of its predecessor. Despite the downsizing, the engine still produces an identical 450PS, while the torque has gone up by a massive 170Nm to reach the magical figure of 600Nm! The latter comes courtesy of a bi-turbo configuration, with both the turbochargers placed within the V arrangement of the cylinders. Audi claims a 0-100kmph time of 3.9s, which is 0.6s quicker than the outgoing car. 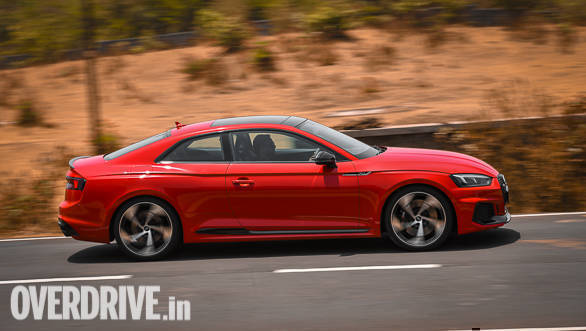 Marrying the new engine to the quattro system is a finely-tuned eight-speed Tiptronic gearbox which is ultra-smooth in its operation and very responsive to changing throttle inputs. Handy power and torque gauges on the instrumentation further highlight the prowess of this gearbox. Cruising at 100kmph in overdrive, only shows about 19% of the power and 27% of the torque (could vary as per test conditions) usage, and it goes up to about 45-55% when the cruising speeds start hovering around the 200kmph mark. The Audi RS5 can hit a top speed of up to 280kmph and going by how nicely it puts the power down onto the road and thrusts your head into the seat; I don't think it would take too long to reach the car's maximum speed. 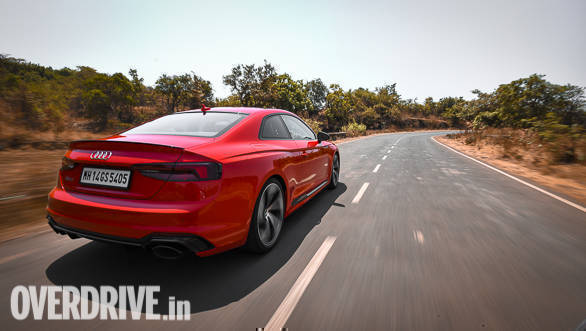 The Audi RS5 has also shed around 60kgs in weight, of which some 30kgs savings come from the new engine alone. The front-end is, therefore, lighter than before and makes for sharper turn-ins and reduced understeer. An electronic differential further reduces the understeery nature of the quattro system, making the Audi RS5 a fast track tool and a brilliant corner carver. If I were to nitpick, I would have liked a more communicative steering. This one feels a bit over-assisted and while it does weigh up in the Dynamic mode, it still feels a bit artificial. Along with the sharper gearbox and engine responses, the Dynamic mode also unlocks the full-blown sound of the V6 engine that fills the cabin with a thrum at lower speeds and at higher engine rpm's resonates into a throaty roar with crackles and pops typically of German sports cars. 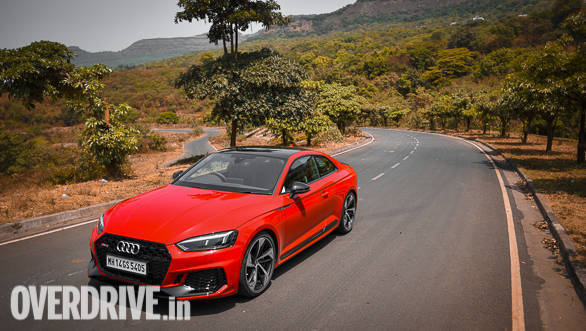 In terms of its raw engine performance and driving dynamics then, the Audi RS5 seems right up there with the BMW M4 and Mercedes  Benz AMG C63, while undercutting the two on pricing. However, for many customers, it will all boil down to which one crunches faster numbers in terms of track lap times and imparts more driving fun. But that is a story for another day.