We are in times where carmakers are testing newer waters - from alternative propulsion to never seen before body-styles. BMW has never shied away from this path and everything from the erstwhile Isetta to the modern day radicals like the X6 coupé-crossover, the i3 city-car, and the 6 Series Gran Coupé, play testimony to the carmaker's boldness. Not so long ago, they decided to merge a liftback body style with sassy lines of a coupé and thus was born the Gran Turismo line. Given the affiliation of the 6 Series with the coupé forms, it didn't long for BMW to realise that their largest GT belonged in the 6er classification and not in the class of the 5 Series. The result is the new 6 Series GT that replaces the 5 GT that was based on the previous generation 5 Series. 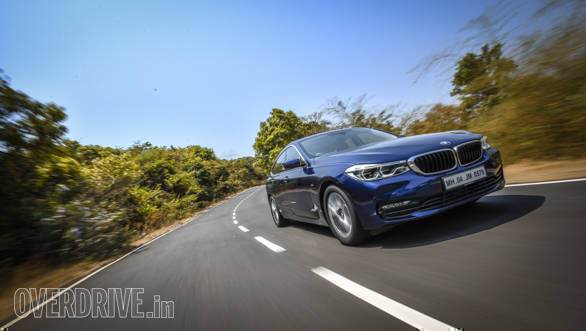 Not only that, the new car also address the 5 GT's controversial, flabby design and cleans it up with sleeker styling and tighter lines. The face resembles the new 5 Series, gets a similar grille with active aero flaps and the three-dimensional detailing for the headlights and the taillights helps further in reducing the visual bulk. With a body this lean, you will be surprised to know that under the receding roofline that flows into the trunk, the 6 GT packs in a 610l boot! 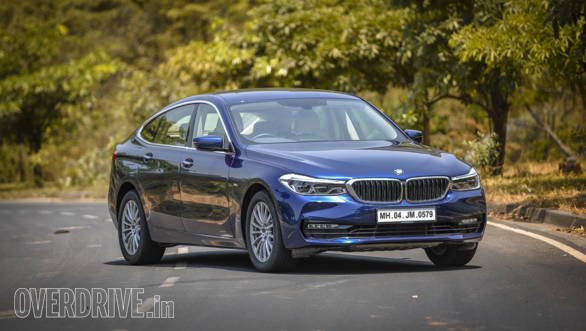 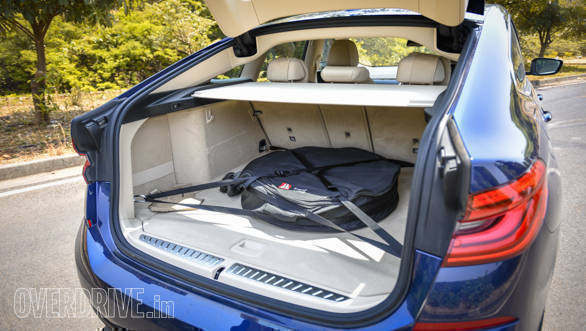 The 6 GT packs in a massive 610l of boot space, but the spare wheel (space saver) eats up quite a bit of usable space. On long journeys with the family, you may have to do away with the spare wheel and rely on BMW's reliable roadside assistance, in case the run flat tyres, well, run flat

Look closely at the wheels though, and you realise that this is an enormous car. Even the 18-inch rims are dwarfed by the car's size and the distance between the front and rear wheels - otherwise known as the wheelbase - is quite large. At 3,070mm, it is exactly similar to the short wheelbase 7 Series (EU-spec, we get the stretched variant), a huge 95mm longer than that of the 5 Series and only 9mm shy of the long wheelbase of the E-Class. 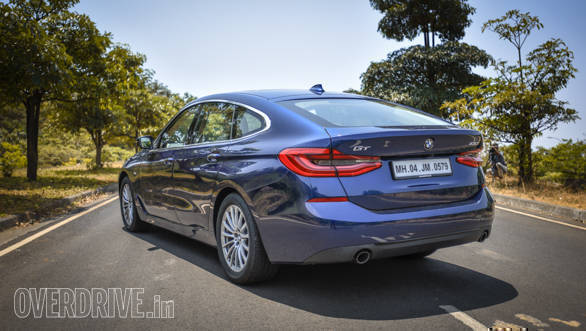 The three-dimensional layout for the taillights looks great and the boot is quite well sculpted this time around, compared to the flabby rear of the 5 GT 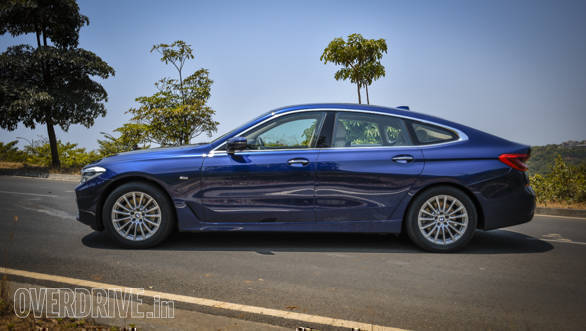 That also means that apart from going grand touring with the road manners of a Bimmer, the 6 GT also has the colossal task of drawing customers away from the E-Class. Its strategy begins with rear seat, where the 6 Series offers legroom and headroom that you haven't yet experienced in a BMW at this price point. It pampers the rear seat occupants with entertainment screens that are controlled by a pleasantly old-fashioned remote control. BMW has thrown in little pillows on the headrests, and the backrest can be reclined by 9 degrees when you need a little more relaxation. 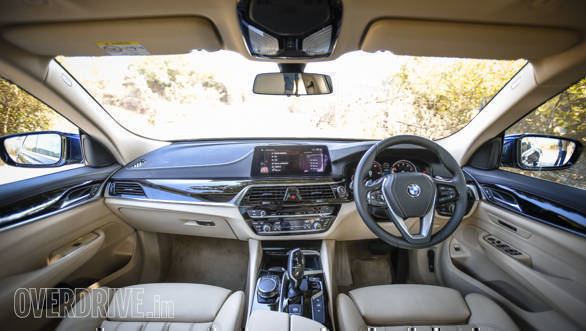 The cabin has an airy feel to it with the bright colours and the large glasshouse. The design, fit and finish is typical BMW 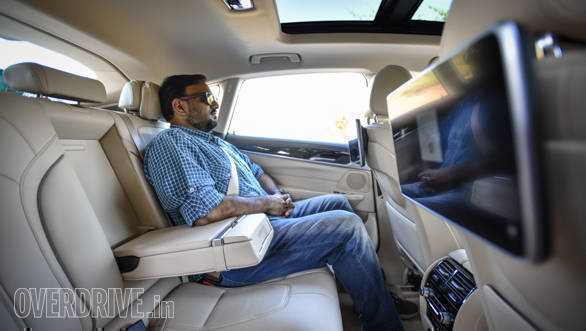 With its roomy rear seat, the 6 Series GT aims to attract those who are driven around and in doing so, it targets the E-Class

There are B-pillar mounted A/C vents and a four-zone climate control too, but the large glasshouse comprising of the panoramic roof and the presence of leather upholstery (Dakota), can make cooling this cabin quite challenging for the car's silent air-conditioning system. Seat ventilation and maybe a segment-first inclusion of massage seats could have given the 6 GT more talking points against the E-Class' cushier seats, larger legroom, and higher recline angle. 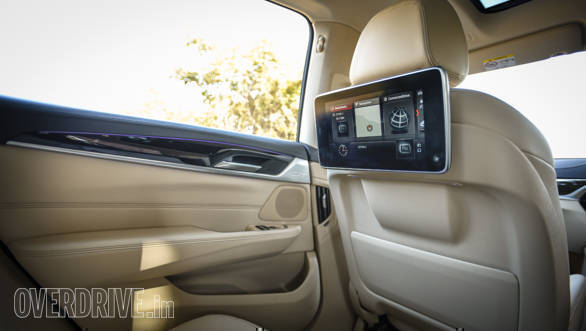 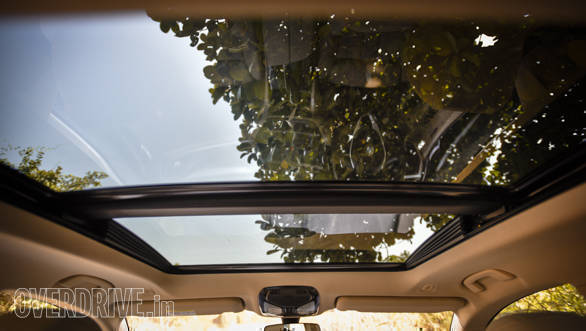 The front seats are large and accommodating and while the driver's seat misses out on the lumbar adjustment, it does allow fine tuning of the side bolstering. The A-pillar is quite unobtrusive in your field of vision despite its high sloping angle, but the receding roofline significantly narrows your view from the rear windshield. 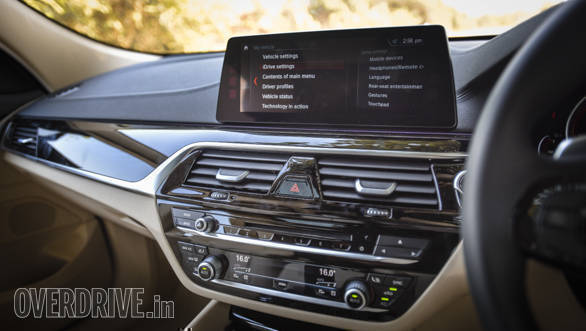 The new iDrive system is still one of the best infortaiment systems in the business and apart from the gesture controls, it now gets wireless Apple CarPlay capability too 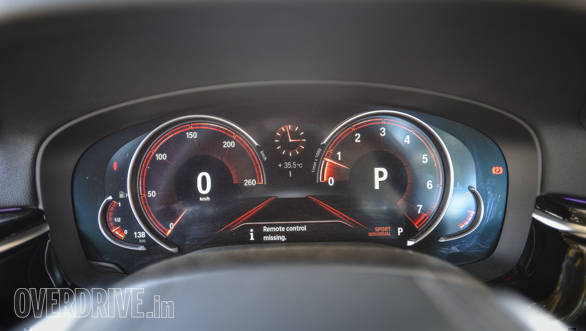 The dashboard, in typical BMW design, is upright and tilted towards the driver. It has the new-age fanfare of touch-sensitive buttons for the HVAC and the latest iDrive system with support for gesture controls and wireless Apple CarPlay. It gets only one USB port though, which is a bummer for a car of this class. The audio quality is on par with its peers and should keep most audiophiles happy. It is a pleasant cabin to be in then, and the airy feel is welcoming - something that is important when munching long distances. 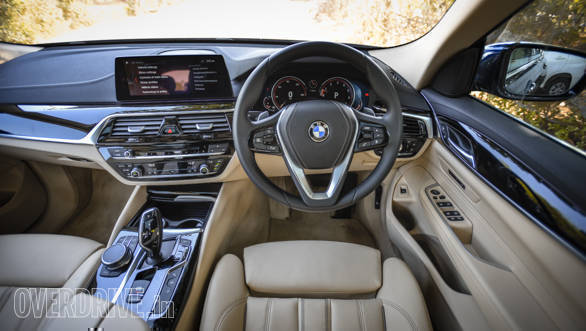 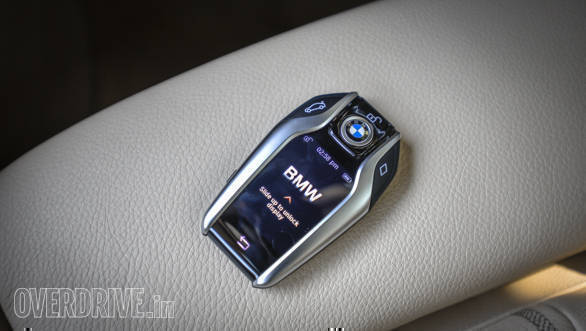 You get the option of specifying the car with the display key, but it missing out the pilot parking feature

As you may have guessed by now, comfort is the keyword for the 6 GT and it is highlighted further when you start cycling through the driving modes. There are the usual Eco Pro, Comfort, Sport and Adaptive modes. But the Sport Plus mode of the 5 Series is traded in for Comfort Plus mode in the 6 GT. The car comes with air suspension in all four corners and that ensures a magic carpet ride even on our poor road conditions. In fact, the ride is so cushy in the Comfort Plus mode that you will need some sort of a reminder that you are being driven around in a BMW sedan. It is that good! It is only the really sharp bumps that make this suspension give out the excruciating thud we heard so often in the older BMWs. When the going gets tougher, you can slow down and raise the ride height to tackle tall humps and deeper potholes that would otherwise make a long-wheelbase luxury sedan break a sweat. 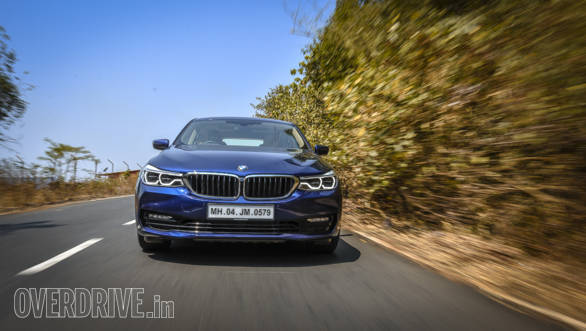 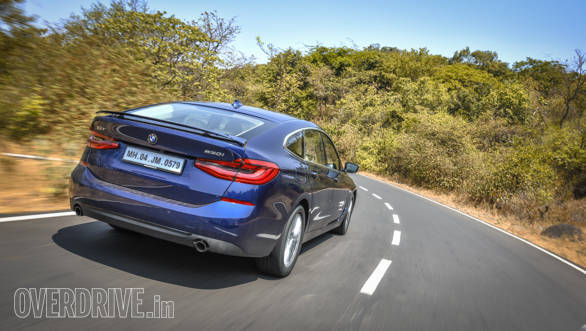 The other modes are self-explanatory - the Eco Pro is the miserly mode that dulls down the engine's enthusiasm in favour of optimum fuel economy, while the Sport mode tightens up the chassis, makes the steering feel more direct and sharpens the drivetrain response. You will be happy to know that around twisty roads, the 6 GT still manages to put a smile on an enthusiast's face despite its comfort-oriented dynamics. I personally prefer the Adaptive mode on most new BMW cars as it alters the drivetrain, chassis and suspension on the fly depending on the driving style, thus doing away with the need to cycle through the driving modes. 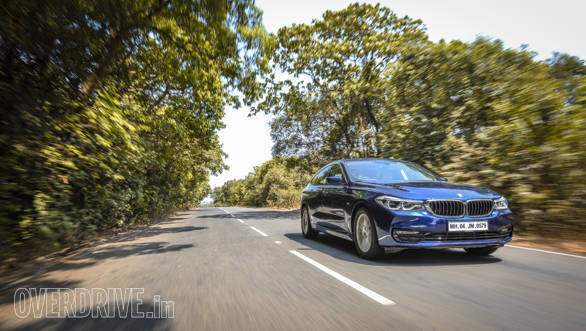 The BMW GT comes with the lovely eight-speed transmission, which is telepathic, so say the least 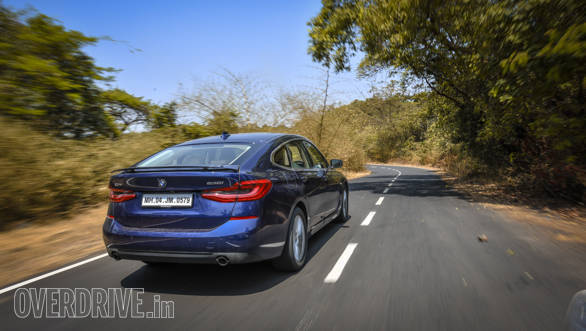 During our tests, the 6 GT 630i returned an overall fuel economy of 7.93kmpl, while highway runs in EcoPro mode averaged at 10.63kmpl. With a tank capacity of 68l, that translates to a driving range of 540 - 720km on a full tank, which is quite good for a petrol tourer. 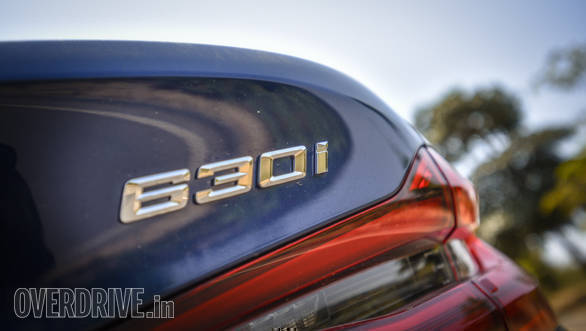 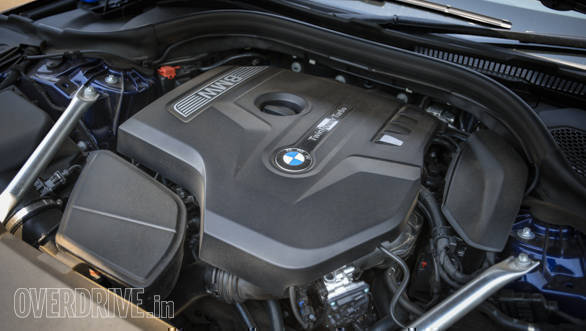 Like most new BMWs that sport the 30i suffix, the 630i badge points to a 2.0l, four-cylinder petrol engine, and unlike the yesteryear, 30i suffixed 3.0l six-cylinder bangers, this one lacks the aural bliss that announced the engine's intent and potential. Not that the 2.0l mill isn't potent, but it lacks the emotional edge. With a more powerful, 258PS/400Nm tune than the 5 Series, the 6 GT managed a quick 6.7s dash from standstill to 100kmph in our tests. Interestingly, with four adults and luggage, the same feat was repeated in 6.9s - highlighting the potency of this motor. The turbocharger does make its presence evident since the engine doesn't feel as eager lower down the revs, but the meaty mid-range more than makes up for it. The lovely eight-speed transmission that this engine is mated to puts power down to the road in a predictable manner and even around the twisties, I would seldom need to use the paddle shifters. 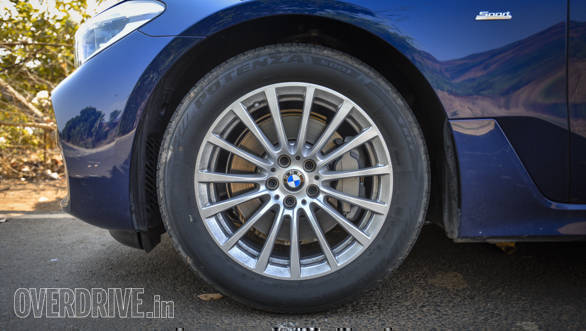 The 18-inch rims are shod with 245/50-R18 run-flat tyres. The car also comes with a space-saver spare wheel and tyre-pressure monitoring system 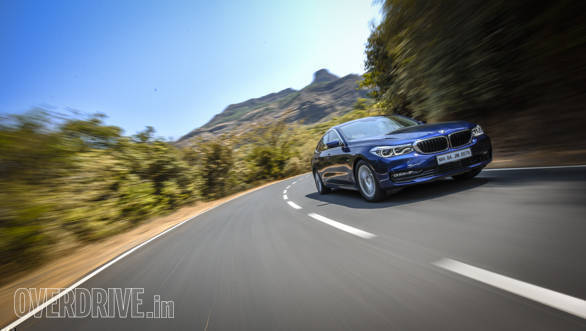 The 6 Series GT has impressive braking manners too, as our spec box reveals. The tyres have excellent grip to that effect and that inspires confidence whether you are driving around bends, or carrying a full house at highway speeds. A wisely knit safety net comprising of airbags all around, anti-lock brakes, ESP, traction control, cornering brakes, side-impact protection and attention assistant, add more peace of mind and cement the car's intent of going grand touring. 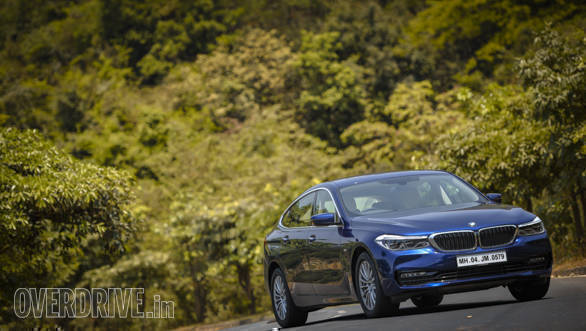 Mercedes-Benz pulled out a surprise when it launched the long wheelbase version of the E-Class in India. BMW could have responded with a 5 Series LWB too, but they decided against it to safeguard the flamboyant character of the 5er that you and I have come to love over the generations. The 6 GT, instead, fits right into the scheme of things to take on the E-Class, where it can challenge the segment leader without having to live up to any legacy. 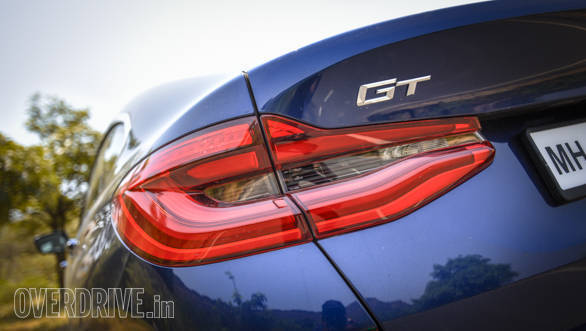 That is a Herculean task, to say the least, and therefore the Sport Line trim seen here is out to test the waters. It does miss out on a lot of equipment but has a tempting price tag that should, in theory, increase footfall at the dealerships. If the response is healthy, the jazzier Luxury Line and the more practical diesel options will join the fray. And then there is the lovely 640i with a sprightly petrol engine and the sporty M Sport trim that I'm looking forward to.