Given my strong affection for road-biased motorcycles, I was never a huge fan of adventure tourers. They might boast serious go-anywhere abilities, but didn't quite fit the bill in terms of entertaining on tarmac or looking as good as, say, sportsbikes and streetbikes. But all that changed with the Ducati Multistrada 1200S. It smashed every notion I had about adventure tourers to bits. It looked good, was scarily powerful, handled brilliantly on tarmac and could yet go places where most motorcycles won't dare to. 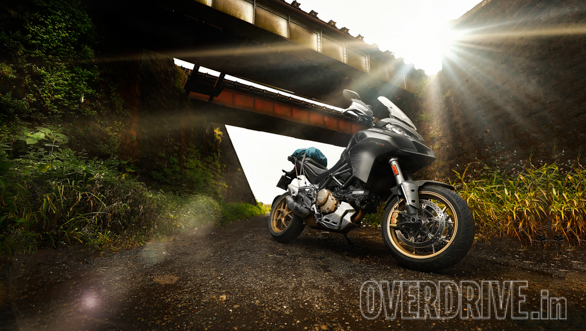 The Ducati Multistrada 1260S is an evolution of the game changer that the Multistrada 1200S was. A midlife update it might be, but the 1260S gets so many updates under its skin, you could pretty much call it an all-new motorcycle

In fact it was so good, Shumi bought himself one and has clocked more than 20,000km on it, in just over a year! So when the updated Multistrada 1260S came out, Shumi obviously pulled rank and rode it first, but surprisingly, the man came back with mixed reactions. I was expecting him to wax eloquent but he stated that while the 1260 does feel better in a lot of areas, it seems to have lost some of the edginess that made the 1200 oh-so-stunning. Really? I wasn't convinced. So when Ducati told me the Multistrada 1260S was in Delhi, I decided to ride it down to Mumbai, and put it through a thorough, 1,400km road test. 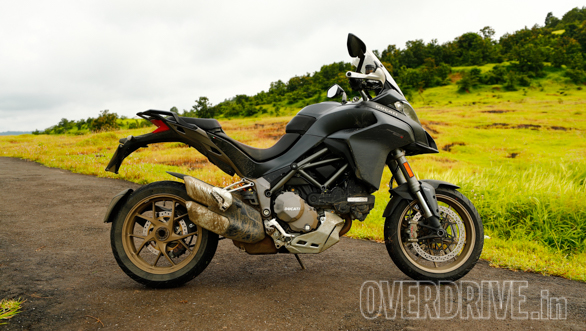 There aren't too many visual changes, which means it's easy to mistake the Ducati Multistrada 1260S for the 1200. Changes only include slightly different side panels on the fairing and a dull gold finish on the alloys

At first glance, the 1260S didn't look very different from the 1200S. The headlights look near identical and only a close look will tell you that the side panels of the fairing aren't exactly the same. Of course, the 1260 isn't a full model change, so the resemblance is a given. There's bigger changes under the skin  to the engine, chassis as also the electronics, apart from the semi-active suspension getting recalibrated. The new engine is the bigger, 1,260cc L-twin lump borrowed from the XDiavel and offers 158PS and 129.5Nm. The 6PS and 1Nm increment over the 1200 might sound modest, but the magic is in the improved power delivery at low to mid revs. The 1260S also gets a bi-directional quickshifter, while the TFT display is even crisper looking. I also like how vital information like tank range, average speed, fuel efficiency and the like are displayed legibly on the bottom left corner of the screen and can be toggled through easily, which makes processing information on the go easier. 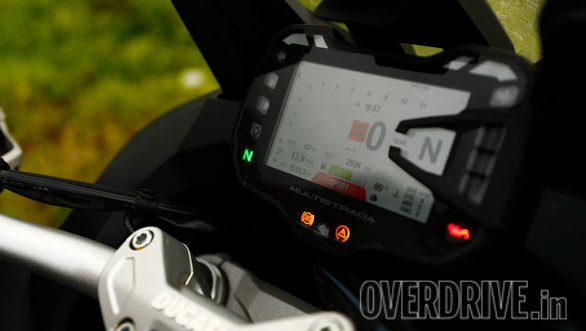 The TFT display for the instrument cluster looks crisper and brighter now and offers information in a neater, more legible way than before 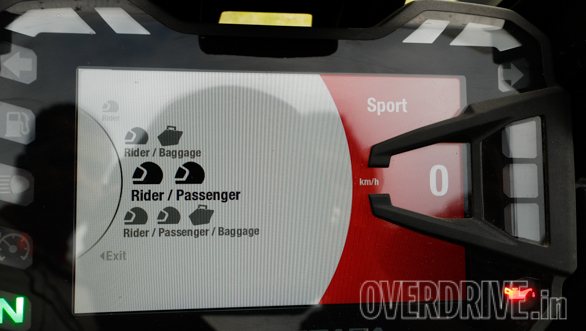 Accessing the suspension settings is an easier affair too now, thanks to a dedicated switch on the left handlebar

I started out early to avoid getting traffic and found myself accelerating hard to get to the highway Delhi-Jaipur highway soon. And the 1260S seemed to pull harder than the 1200S instantly, even below 5,000rpm. The quickshifter was working like a charm, offering quick, precise responses. As I hit the highway and opened the throttle to its stop, all hell seemed to have broken loose. I was thrust forward with an urgency comparable to litre-class superbikes and acceleration was so fierce, it was difficult to hold revs in even in higher gears! I won't deny that I was taken aback by the acceleration. And that's the beauty of a V-twin engine  it doesn't make you wait before offering its full wealth. Getting to ridiculously fast and (strictly illegal!) speeds is a cinch, which means you're also covering distances very quickly. More importantly comfort was excellent, and I could stay in the saddle for hours without needing to stand up on the pegs to stretch my legs. Butt breaks were far and few in between and I got to the outskirts of Jaipur  a shade under 300km from Delhi  in almost half the estimated time! 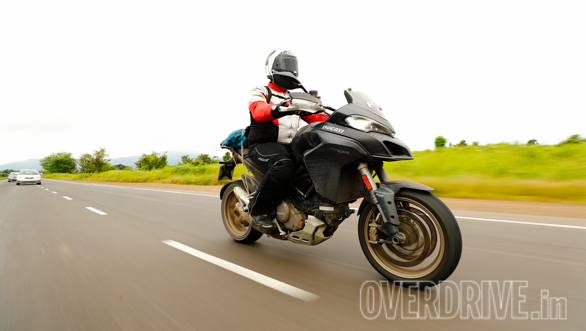 With 158PS on tap, the Ducati Multistrada 1260S is no less than a projectile on two wheels and allows you to carry blistering speeds on open roads

My destination for the day was Udaipur, 650km from Delhi. The blistering pace the 1260S allowed saw me get to Udaipur late in the afternoon, though it wasn't just the manic engine performance that made it possible. The new engine feels smoother and more refined which contributes to lesser fatigue. The quickshifter certainly helped as well with its butter-smooth clutchless shifts. The seat is wide and comfortable yes, though I wish the padding was softer, just a wee bit more. More importantly, the electronically damped, semi-active suspension helped make the ride supremely comfortable. The suspension uses sensors to relay information regarding the road surface to the ECU continuously, which adjusts damping real time to offer accurately measured ride and handling. Long hours in the saddle of the Ducati Multistrada 1260S are easy, thanks to the comfortable ergonomics, though you occasionally do feel the need to stand up on the pegs and stretch your legs if the knees get cramped

The next morning, the 1260S had another revelation waiting. As soon as you exit Udaipur and head south towards Gujarat, it's all fast, well-paved tarmac and twisty roads. I chuckled with glee at the prospect, since the previous day had seen me only munch miles feverishly on arrow straight highways. The 1260S allowed me to carry serious speeds through corners, also courtesy the sparse traffic. As compared to the 1200S, the 1260S felt calmer and more composed while entering corners, thereby affording more time to absorb what's happening even when doing a fair clip. But in effect, as Shumi pointed out, it didn't feel as sharp as the 1200 at turn-in. That's courtesy an increased rake angle, up by 1 degree, and a swingarm longer by a significant 56mm, which has resulted in slower turn-ins, but improved stability. And the improved stability was welcome, particularly around corners where trucks had left the road surface undulated. 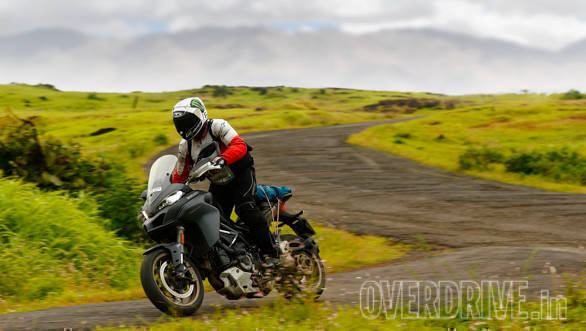 Despite its large dimensions, the Ducati Multistrada 1260S is quite a handler and feels agile on its feet, thanks to the revisions to the chassis

The six-axis IMU also deserves a thumbs-up, and typical of Ducati, electronics are top-notch. I stuck to Sport mode through most of the ride for the quickest of responses, as Touring mode offers the full performance too, but with softer responses. The cornering function of the LED headlights was a boon early in the morning and added to confidence levels. But the biggest confidence boosters, apart from the suspension, were the Pirelli Scorpion Trail II tyres. The tyres offered massive grip levels throughout. I was also concerned that the long ride and high speeds I was doing would result in a fair amount of tyre wear, but that wasn't the case. Braking performance is excellent as well, courtesy the 330mm discs and Brembo M50 calipers, which offered braking prowess comparable to streetbikes in terms of bite and stability both.

Adjustability and positioning of the windscreen helped with good ventilation when lowered, along with excellent wind protection at high speeds by channeling the air perfectly above my helmet. The second day was a longer stint, but there was never a dull moment in the saddle. The bike enthralled me with its mind-numbing acceleration while handling is so good, the 1260S could give smaller streetbikes a run for their money. And as I got to the outskirts of Mumbai I didn't feel particularly exhausted. I felt as if I could have ridden the bike for another couple of hundred kilometres, such was the comfort. 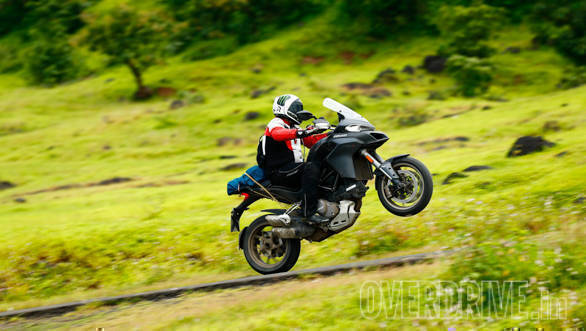 With its heady mix of performance, comfort and handling, the Ducati Multistrada 1260S is a jack of all trades and master of most too

Overall, the Multistrada 1260S takes the already lofty benchmarks set by the 1200S a notch higher. Its performance will stun you as there's so much shove on offer at all times that it's almost impossible to get to the redline in any gear. In fact, everyone who rode the 1260S in office after me came back stunned, and with large grins plastered across their mugs. What makes the Multistrada 1260 even more enticing is the pricing. The base version retails at Rs 15.99 lakh ex-showroom, but if you ask me, the 1260S with its semi-active suspension is a steal at Rs 18.06 lakh ex-showroom. It builds on the strengths of the 1200S in a way that the overall package even more compelling, especially if you do a lot of touring on tarmac. Of course, you could take the bike to a racetrack and have a blast. Its experience is so wholesome that the Multistrada 1260S can pretty much be all the motorcycle you'll ever need  it's fast, comfortable and can go anywhere you like. If the 1200S was a beast, I can confirm to you that the beast has now evolved!