The Yamaha YZF-R15 version 3.0 has pretty much been the cynosure of attention since its broke cover last year in Indonesia. Needless to say, its India launch at the 2018 Auto Expo was anticipated highly as the new bike is a huge leap over the previous version in nearly every aspect. We rode the bike at the Madras Motor Race Track, the same place where we'd ridden the original R15 ten years back, to bring you this review. To know more about the things we loved and didn't about the new YZF-R15 v3, read here. 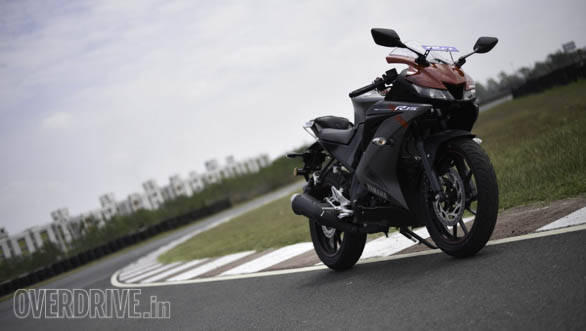 The sleek Yamaha YZF-R15 V3 comes in two colours, this rather good-looking red-grey and the more traditional black with Yamaha-blue 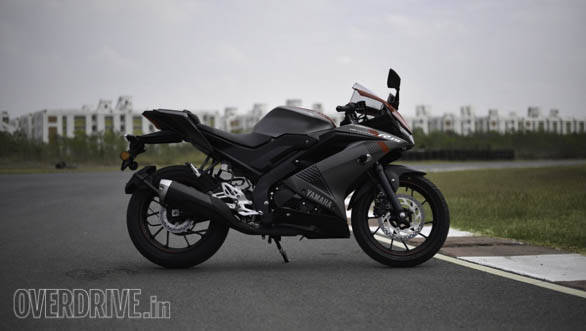 The Yamaha gets only some graphics apart from the badges and it looks great!

The design is entirely new and the version 3.0, expectedly, is inspired by the current generation YZF-R1. The front end isn't as radical looking though  the headlights are sleeker looking all-LED units with a dummy air intake in between, and the lights look stunning with their layout and the white beam from the LEDs. 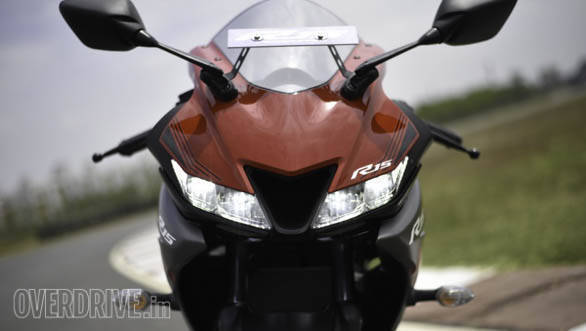 The top fairing of the Yamaha YZF-R15 v3 has a flat panel sort of like the R1's ' race numperplate' but the bottom half has a large air intake flanked by a quarter of the four LEDs that make up the headlight.

The fuel tank and the fins on top of it, the slits in the top triple clamp, the new instrument cluster are scaled down versions of the current R1's and look very appealing. The rear end looks similar to the R1 too, particularly the rear seat cowl and the LED tail light. On the whole, the design is very fresh and modern and is sure to age well. 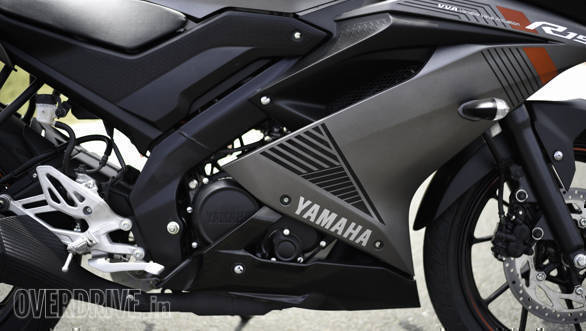 With the number of changes to the engine it would only be fair to say this is an all-new motorcycle and not a 'version 3.0'. The motor is almost entirely new  displacement is up to 155cc from 149cc thanks to a bigger bore though the stroke is the same. Then there's bigger throttle bodies, new forged pistons, a new connecting rod and a rebalanced crankshaft. The compression ratio is higher now at 11.6:1 as compared to 10.4:1 earlier, while several minor changes to the internals result in lower losses. 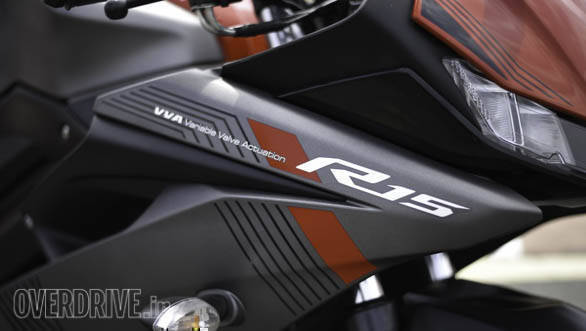 The biggest highlight though is the addition of VVA (Variable Valve Actuation). The R15 version 3.0 uses two intake valve cams  one for enhancing low to midrange performance along with a separate one for high revs that kicks in at 7,400rpm to offer better grunt. The instrument cluster also includes an indication to let you know when VVA is active. 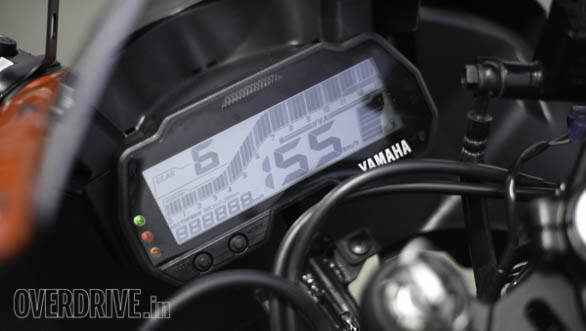 The rev range has been increased and all the changes have resulted in a higher power output of 19.3PS, produced at 10,000rpm as opposed to 16.6PS at 8,500rpm earlier. Peak torque produced remains unchanged at 15Nm. With its kind of technology and outputs, I have no doubts in saying the R15's engine is the most powerful and most technologically advanced 150cc engine. The bike also benefits from the addition of an assist and slipper clutch now  so there's lesser effort required at the lever, apart from which rear wheel hopping under aggressive downshifts is a thing of the past. The six-speed gearbox is the same but the secondary drive has been revised to suit the engine characteristics better. 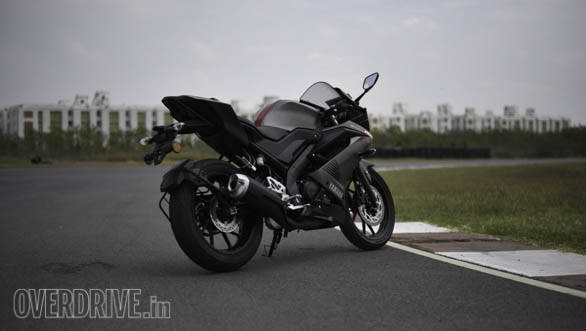 The Deltabox frame has been modified to accommodate the wider swingarm. The swingarm is also shorter resulting in a 1,325mm wheelbase as opposed to 1,345mm earlier. The trail has been reduced by 10mm and stands at 88mm. Seat height has increased to 815mm from 800mm but the riding position doesn't feel more committed or more aggressive. The R15 version 3.0 now uses bigger, 41mm telescopic forks upfront, though the upside down forks on the Indonesian version have been given a miss to keep costs in check. 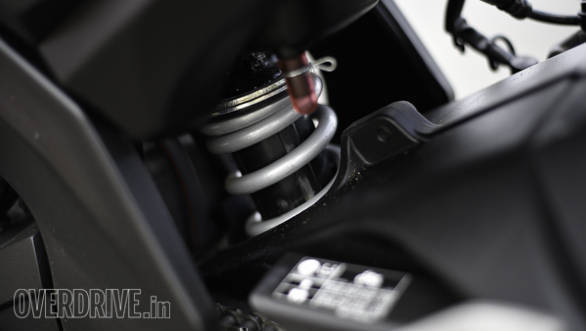 The rear monoshock is essentially the same unit, but uses stiffer spring rates. More importantly the monoshock isn't mounted onto the swingarm directly now and uses a linkage unlike before. The R15 version 3.0 also uses fatter tyres  the front is now a 100/80 R17 while the rear is a 140/80 section (both MRF Zappers)  to offer a surer feel when leaned over. Our test bikes were equipped with the optional Metzeler rear tyre, which is a stickier 140/70 section tyre. 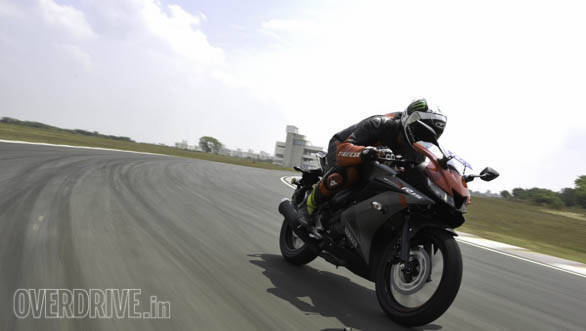 Our seat time was short, but the findings on the racetrack were very interesting. The first and most obvious thing to notice was the improved performance as also the more aggressive acceleration courtesy VVA. The R15 feels a lot stronger when taking off from standstill and in fact Yamaha claims the new bike is significantly quicker to cover the 1/8th mile distance as compared to the version 2.0. The fuel tank on the R15 version 3.0 can hold 11 litres of fuel, 1 litre less than before while the bike is heavier than before by 3kg given its kerb weight of 139kg.

These are differences that affect the bike's power to weight ratio but the higher engine performance has negated the weight increase as the bike's feels a lot quicker  be it from standstill or when opening the throttle at corner exits. There's more thrust than before at low to mid revs and I didn't really have to wait for the power to kick in, and the 8,000 to 10,000rpm band is now an even sweeter spot to be in as performance is a lot stronger in the region. 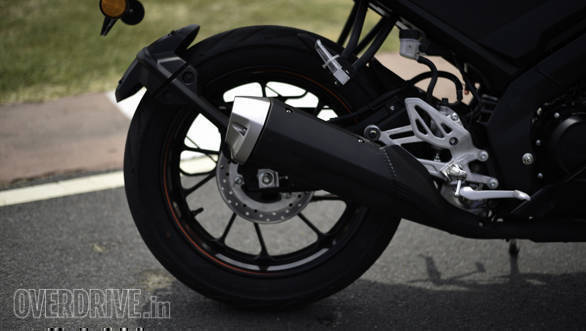 What hasn't changed is the familiarity of the exhaust note and the sense of urgency with which the engine builds revs, so the bike feels familiar in that context. One noticeable change in the engine feel was in terms of the refinement. There's a very slight hint of vibration as you get closer to the 12,000rpm redline though it isn't something you should be concerned or worried about. The higher performance keeps you engaged and I could feel the acceleration being quicker down the main straight as also notice better drive out of corners at the MMRT. More importantly, I could go around corners in higher gears thanks to the improved torque delivery which means carrying more speeds through corners is easier now. 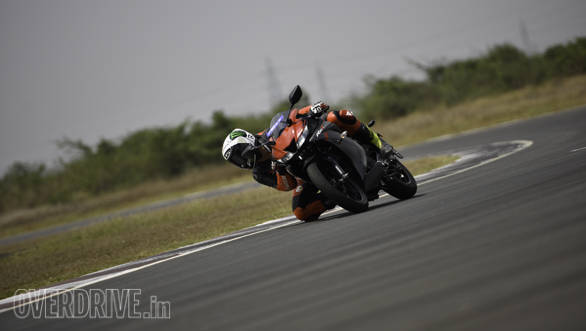 This is yet another department that sees a massive change. The changes to the chassis and suspension have resulted in a dramatically different feel. The bike feels quicker to tip into corners  I was almost surprised at how quickly the bike dropped into corners with just a nudge to the outside handlebar and getting the knee down is a lot easier now than before! That's courtesy the changes to the suspension as also the different tyres. The optional Metzeler on our test bike played a huge role in the additional confidence, and Yamaha will sell the tyre at Rs 9,998 to you as an option. 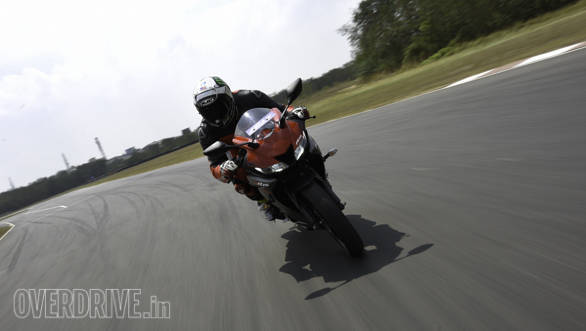 Also, despite the shorter wheelbase the bike actually felt longer and more planted when leaned over, which offered a more confident feel. That said, the front end didn't feel as feedback-y as before, though I suspect that was down to the bikes running stock air pressures even on track and the MMRT is a bumpy circuit where slightly lower pressures are recommended in the interest of better front end feel and confidence. The front brakes on almost all test bikes weren't as sharp as expected too  again, I suspect incorrect bedding in of the brake pads caused the issue and I will reserve that judgement till we get the bike for a full road test.

On the whole, the handling package is significantly different and better than before. The R15 version 3.0 feels like a more polished and evolved motorcycle in terms of its handling now. 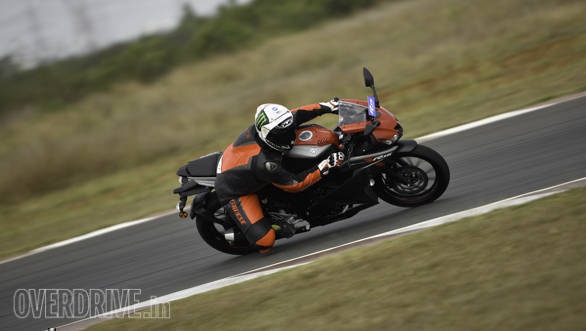 The Yamaha R15 has always been the best handling small capacity motorcycle and to compare it to other 150s has always been unfair. The R15 version 3.0 slots itself further into the niche it has belonged to as a 150cc supersport machine. The improved engine performance is very welcome and makes riding the bike more engaging, particularly with the addition of VVA. The handling package has only gotten better and I feel the R15 is now poised to challenge slightly larger machines in terms of handling characteristics with its sportier feel.

The styling is hard to fault with as the new bike looks smashing, especially in this red-grey colour combination you see here. Build quality and fit-finish levels aren't as spic as before  in certain areas only though  and some of the black plastic panels could have been fit better while welds could have been cleaner. But as far as the riding experience is concerned the R15 version 3.0 is very impressive and clearly takes its game a notch higher now. Priced at Rs 1.25 lakh ex-showroom the R15 version 3.0 is thus more value for money now.