For the longest time I've lamented the lack of a five-speed gearbox and front disc brake in 110cc commuters. Manufacturers' argument though has always been that buyers are not willing to pay for these 'extras', besides not feeling the need for them. I for one always felt this contradicts the very interests of buyers, in the sense that most buyers go in for 110cc commuters for high fuel efficiency numbers and a fifth cog will only bump efficiency up. But Bajaj Auto has paid heed and has just launched the Platina 110 H Gear. Before you start scratching your head the H, according to Bajaj, stands for Highway or even Happy. Interesting? There's a bunch of other updates as well and I spent a few hours riding the bike to decide how much better the H Gear is, than the 'standard' four-speed version of the Platina 110. 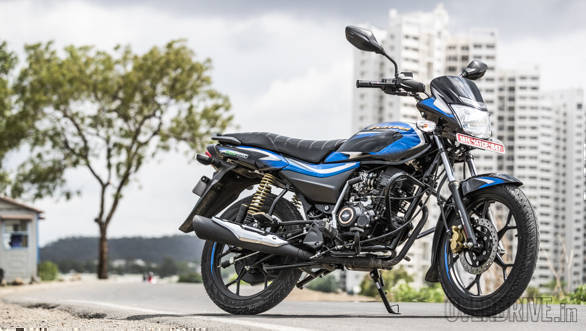 The biggest addition is the fifth gear and Bajaj has also re-engineered the heel-and-toe gear lever to add a unique-looking linkage to reduce effort and improve quality of gearshifts. Then there's the part-digital instrument cluster that has a large display flanking an equally large analogue speedometer. The display integrates vitals like fuel gauge, odometer and tripmeter and clock, but more importantly it has a large gear position readout along with prompts for upshifts or downshifts. Interestingly, when you shift from fourth to fifth the display does not show the number 5 but displays H instead! The front brake disc is a larger, 240mm one as opposed to 220mm earlier and uses what Bajaj calls the anti-skid braking system, its own version of a combi-brake system. Interestingly, Bajaj has linked both brakes mechanically despite the rear being a mechanical drum brake and the front a hydraulic disc brake, and tells us it has also applied for a patent for the system. 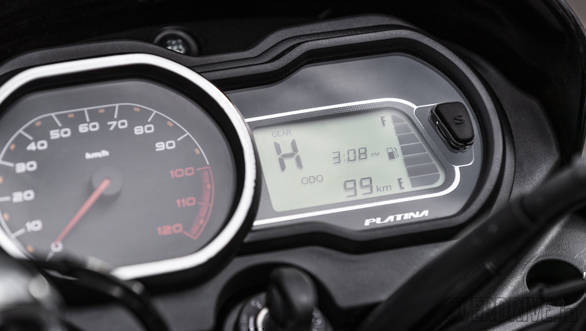 The instrument panel on the 2019 Bajaj Platina 110 H Gear is a part-digital display now. It includes a gear position indicator that display H instead of fifth gear after fourth, apart from integrating a prompt for up/down shifts 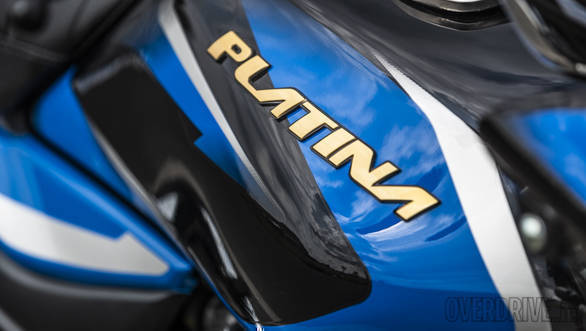 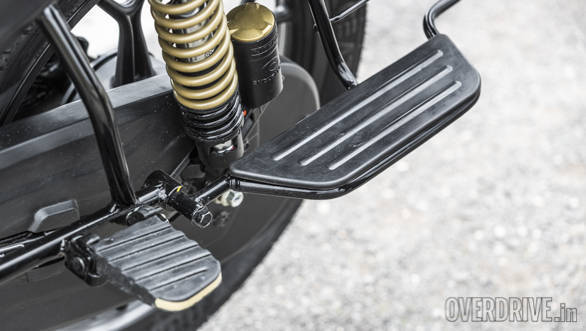 The seat is the same as before but gets a quilted finish for improved comfort, while the Platina name on the fuel tank is a 3D logo. Pillion foot rests are foot 'pads' now for improved comfort as well. Decals have been revised too and are inspired by the Discover's. I wish Bajaj would have updated the headlamp and fairing design though. The LED strip above the headlight doesn't go too well with the rest of the face and a better integration would have been welcome, considering the comprehensive overall makeover otherwise. On another note I do like how compact and lean the Platina is, without too much visual mass. On the flip side, this also means my large frame looks a little too large on it. 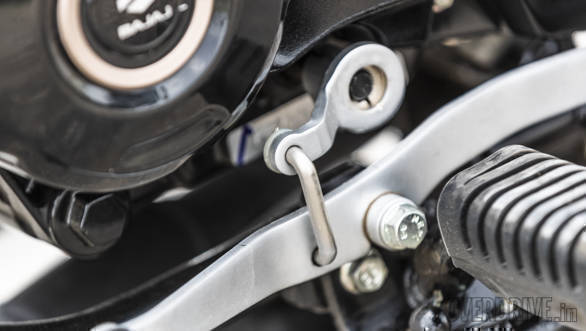 What about the engine?

The engine powering the Platina 110 H Gear is the exact same 115.5cc air-cooled single cylinder motor powering the bike's four speed version. It offers 8.6PS and 9.81Nm and while the outputs are only par for the segment performance from the motor is eager throughout the rev range. What's even more impressive is the refinement. The engine sounds smooth and feels refined, even when accelerating hard through the gearbox. There's barely any vibration even at high revs, bearing testimony to Bajaj Auto's continuous efforts in reducing frictional losses. Another impressive bit about is the fluffy-light, butter-smooth feel from the gearbox as gear changes call for minimal effort while also feeling precise. What's slightly irksome though is that the Platina, in traditional Bajaj fashion, still uses the all-down shift pattern. All said and done, the most important bit here is the bike's fuel efficiency and the Platina 110 H Gear boasts an ARAI certified efficiency 84kmpl. What's more, Bajaj Auto claims the bike will return 70 to 75kmpl in the real world, which is really impressive. 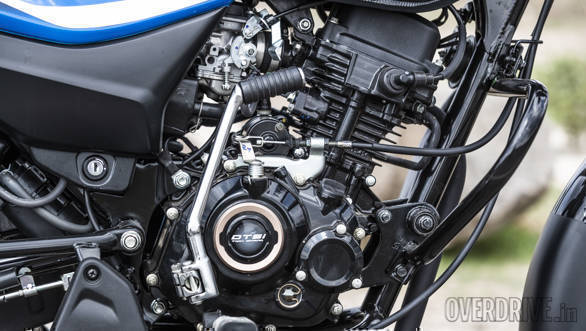 On the road, the biggest advantage of the H err I mean fifth gear is that it has allowed the Platina to stretch its legs better. As compared to any other four-speed gearbox equipped commuter, the Platina doesn't feel stressed even at the 80kmph mark and also can get to speeds north of 90kmph on the speedometer. And that's besides the fact that its engine feels less stressed at any given point of time thanks to the additional cog. The engine's linear power delivery lets you make your way through traffic in fifth even at speeds under 40kmph which is impressive, as this is exactly what a lot of commuter buyers want. Many commuter riders barely downshift even if they have to slow down unless absolutely required and Bajaj says needs of such riders have been factored in while engineering the Platina 110 H Gear. 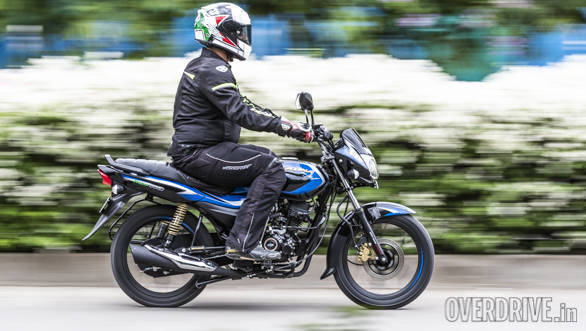 The 2019 Bajaj Platina 110 H Gear feels smoother, more refined in city and more relaxed at higher speeds thanks to the fifth gear

The prompt for gear changes on the display tells you when you shift up or down depending on the engine revs and the wheel speed and I noticed it would prompt me to shift up almost as soon as I had changed a gear, obviously in the interest of maximizing fuel efficiency. Moving to the ride and handling, the Platina's ride quality has been one of its biggest USPs says Bajaj, especially with suspension setup that it calls the Comfortec. The front forks and gas-charged rear shock absorbers do a commendable job of soaking up undulations and potholes and overall ride quality is very impressive. And while 110cc commuters are not really intended to be sporty handlers, the Platina 110 H Gear is quick to change direction without losing composure, despite its diminutive size and bantam weight and also feels planted at highways speeds. 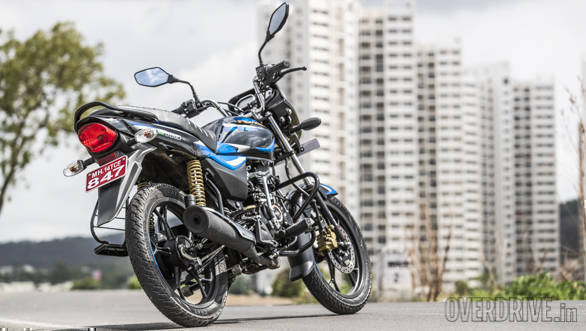 Bajaj Auto tells us the Platina has gone from strength to strength since it was launched originally, way back in 2006. In fact, it is a force to reckon with in the 110cc segment when you consider the fact that Bajaj is moving just a little less than 70,000 units of the Platina family every month. Needless to say, continuous improvements to the motorcycle have helped Bajaj rake in the numbers and the latest set of updates ensure the Platina will do even better. Bajaj is confident of crossing the 70,000 units mark soon and given how impressive the H Gear is, I cannot help but agree with the manufacturer. The bike is priced at Rs 53,376 ex-showroom for the drum brake version and Rs 55,373 ex-showroom for the disc brake version, which is a premium of about Rs 3,000 to 5,000 over the four-speed Platina 110. And these are good prices when you consider the updates, as also the overall refinement, performance and comfort. Also, you cannot neglect the fact that its five-speed gearbox gives the Platina 110 a distinct advantage over its competitors like the TVS Radeon, Hero Splendor Pro, Hero Passion XPro and Honda Dream Yuga.