The Benelli Imperiale 400 has been a subject of great interest for the Indian motorcycle enthusiast ever since it broke cover at the 2017 EICMA. Not only does it sit bang in Royal Enfield territory, this retro classic motorcycle from the Italian manufacturer also looks strikingly similar to Royal Enfields, particularly the Classic 350! And on paper, it looks quite promising too. Has Royal Enfield finally met its match? We swung a leg over the Imperiale to find out. 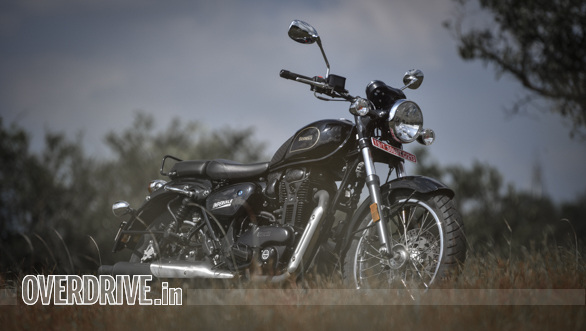 At first glance it's easy to say that the Imperiale 400 looks just like the Classic 350, especially with its round headlight, tear-drop shaped fuel tank, split seat, full metal fenders and the long exhaust. But look closely and you will realise that the Benelli has a lot of unique design cues that make it look distinctive. It has a character of its own in that sense and looks very appealing. Another thing to note is that while a lot of manufacturers offering retro motorcycles today try to blend modern design cues to retro ones when designing the motorcycle, Benelli has stuck to the simplest of designs with the Imperiale, while also ensuring the bike resembles motorcycles from the 1950s as closely as possible. 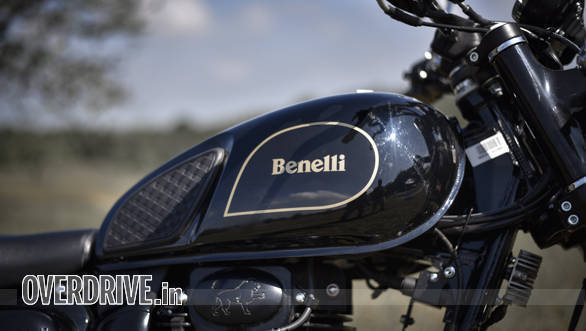 The bike has been designed in Italy by Benelli's Centro Stile design centre and has a very striking appearance, from almost all angles. In fact if the number of heads it turned while I was testing it and the inquisitive looks it got, the Imperiale 400 is sure to receive some serious attention on the road! The face has its own charm, thanks to the round headlamp flanked by round, clear turn indicators and twin pod instrument cluster sitting on top. I particularly liked the golden pinstripes on the fuel tank and also the tank pads too, especially with their quilted design. Viewed from the sides the bike looks long and has a low slung stance, which adds to its appealing looks as well. The rear brake pedal design is an eyesore on an otherwise nice looking motorcycle though. On the same note, the rubber mounted footpegs could have been designed better too. 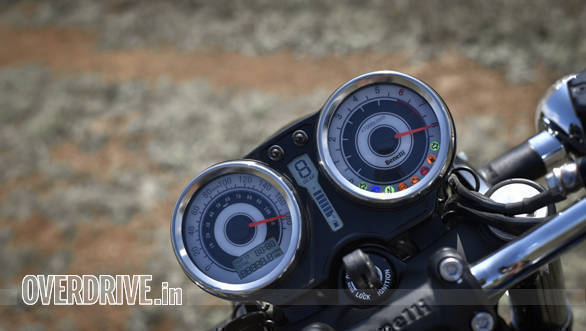 The chrome finished wire spoked wheels adds to the bike's classic appeal further, along with the split seats, especially the spring-loaded seat for the rider. Attention to detail is excellent, which is what impresses a lot. Benelli has included reach adjustment for the front brake lever, something not seen in this class of motorcycles. Then there's the twin-pod instrument cluster, which again uses a simple yet very appealing design. The pod for the speedometer integrates a display that has two tripmeters, while a vertical display between the two pods houses the digital fuel gauge and gear indicator. Neat! Overall, the Imperiale 400 has the appearance of a larger motorcycle visually, as if it were powered by an engine displacing in the region of 600cc. So as far as design and its visual impact are concerned, Benelli has hit the nail on the head here. What's also impressive is the build quality. Overall quality and fit-finish levels are a lot better than what we have seen on Benellis in the past and the Italian manufacturer has clearly put in a lot of effort on this front, especially in terms of the paint finishes and the panel gaps both. 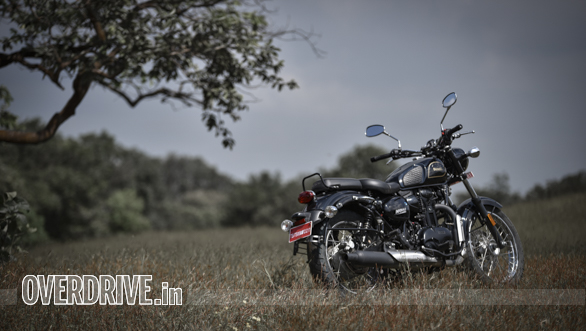 Overall, the Benelli Imperiale 400 is a well-executed design and a motorcycle that impresses on crucial fronts like build quality and fit-finish

The Imperiale 400 uses a 374cc, air-cooled, single cylinder engine that puts out 21PS at 5,500rpm and 29Nm at 4,500rpm. The outputs are thus similar to Royal Enfield's 350cc single cylinder engine as also the fact that the Benelli motor is a long stroke one just like the Enfield, but despite that the Imperiale 400's engine feels quick to rev. More importantly, it feels very smooth and has a refined feel to it. Benelli has also concentrated most of the grunt at low to mid revs, as you would expect of a motorcycle in this segment and performance is adequate. Of course, 205kg kerb weight can be felt when trying to accelerate hard, but then this is a motorcycle meant to be ridden in a laidback fashion. 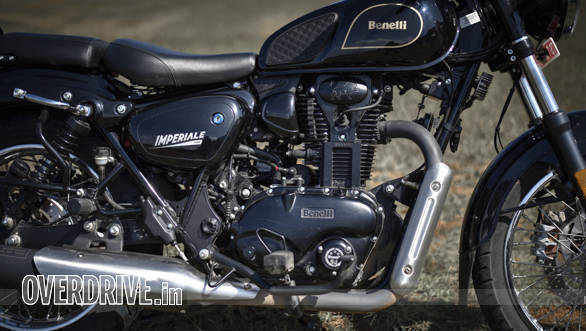 The Imperiale 400 managed the 0-60kmph run in just over five seconds in our VBOX test, while 0-100kmph was achieved in 13.36 seconds, which is fairly decent. A lower kerb weight should help the bike accelerate quicker, but clearly that's not the primary intent for the Imperiale. The bike is meant for cruising on highways and it feels impressive on the front. You can hold 90-100kmph on open roads without the engine feeling stressed, though the tachometer needle points in the region of 4,500rpm at the speeds, which is on the higher side. A taller fifth gear could have helped in this regards. There's a bit of vibration from the footpegs but apart from that the engine feels smooth. The bike runs out of steam just above 120kmph on the speedometer but even then it's more like the performance has been restricted, rather than the engine having reached its limit. 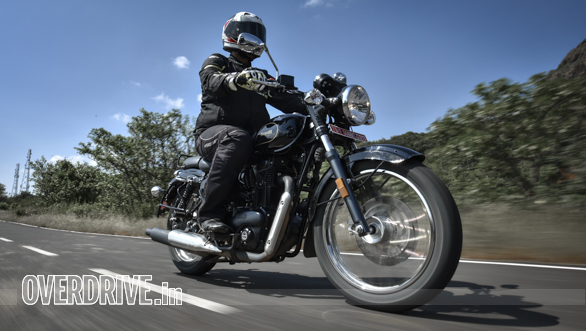 What's more, if you are looking for a Royal Enfield-like thump you might be disappointed as the 'thump' is a lot milder here, but the Imperiale 400 does offer a very distinctive exhaust note that goes with its overall character and positioning as a retro motorcycle. The Jawa was a bit of a disappointment in that sense, but the Imperiale 400 certainly is not. Rideability in the city is good too thanks to the strong bottom-end grunt, without the need to change gears too often. I wish clutch effort at the lever was slightly lower, though the gearbox impresses with its precise shifts and light feel as well. As far as fuel efficiency is concerned, the Imperiale 400 managed to return 31.4kmpl in our city fuel efficiency test and 33.15kmpl on the highway. The numbers are fairly decent, especially given the bike's kerb weight but the tank capacity of just 12 litres is certainly a limiting factor, especially for long rides.

The suspension setup is as simple as it gets  the Imperiale 400 uses 41mm telescopic forks upfront and preload adjustable shock absorbers at the rear but the ride quality is surprisingly good. The bike impresses in terms of soaking up bumps, undulations and potholes and thus cushions the rider well from shocks. Of course, the spring loaded seat for the rider has a role to play here as well. It is a design that was seen on motorcycles several decades back, but the motorcycle's shock absorbers and the springs under the seat work as a two-stage suspension system and together make for a very good ride. At the same time stability at high speeds is quite impressive as the suspension isn't particularly soft but the setup is on the firmer side, which helps the motorcycle stay composed. 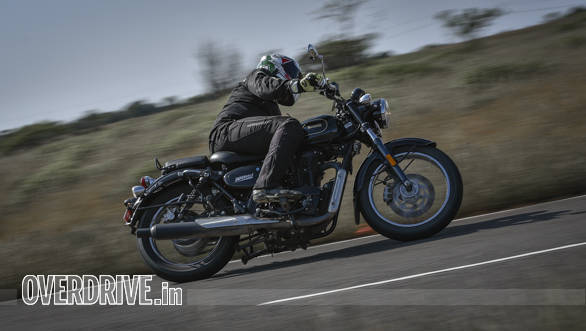 The firmness of the suspension also helps the Imperiale offer a confident feel in terms of handling. With a 19 inch front and an 18 inch rear wheel the Imperiale 400 isn't a motorcycle to go corner carving on, but it feels well planted around corners. The bike is shod with TVS Remora tyres (100/90 at the front and 130/80 at the rear) which offer adequate grip on dry roads, but I am not entirely confident of grip levels in the wet, especially since I was able to reach their limit rather easily. A set of grippier tyres should offer more confidence and we hear Benelli is planning to offer customers the option of different tyres at the time of purchase. 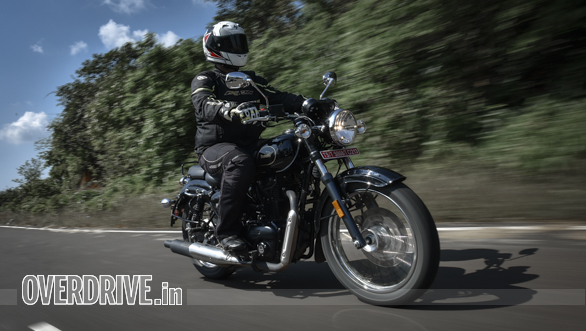 While its upright seating position works well in most conditions, the Benelli Imperiale 400 also comes across as a motorcycle that's well-suited to riding distances

The seating position is upright and the handlebar is wide and offers good leverage. The position works well in city and when riding distances too, though I would have liked the footpegs to be placed either slightly forward or slightly towards the rear. And when it comes to riding distances, the fact that the there's barely any vibration from the handlebar helps a lot, as the bike does not leave you with buzzy hands. This should certainly translate to lesser fatigue on long rides. 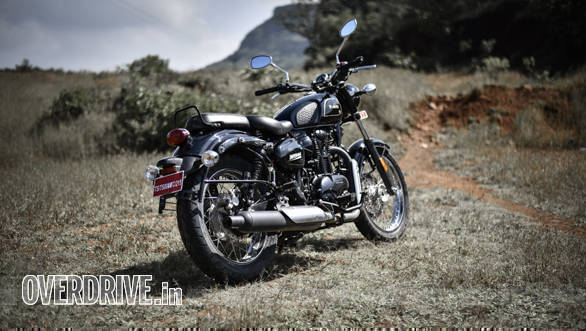 It's easy to dismiss the Imperiale 400 as yet another retro motorcycle that's trying to be a Royal Enfield - given its design and similar positioning - but the fact that is that the Imperiale has a character of its own. It certainly has the ability to carve its own niche in a space that's been dominated by Royal Enfield with its design, build quality and comfort as well. Benelli has priced the Imperiale 400 at Rs 1.69 lakh ex-showroom, which, depending on what version of the Classic 350 you compare it to might sound like a bit of a premium, but the fact is that the Imperiale 400 will come across as a pleasant surprise for a lot of enthusiasts with what it brings to the table. What's more, Benelli may not be anywhere close to Royal Enfield's sales and service network and its products are also yet to establish themselves on the reliability front, but that does not take away the fact that the Imperiale 400 is an impressive product and makes a strong case for itself in the premium retro-classic motorcycle space.