Benelli's comeback script for India is pretty interesting when you see the type of motorcycle they've decided to introduce. Adventure tourers are steadily gaining popularity in our country and much has to do with the unbeatable practicality that they offer. Not only are they quick and comfortable, advs as they are popularly known, can handle the worst of Indian roads. Hence, the TRK 502 and 502 X, that have been handed the task of re-establishing the brand in India. While we did sample both motorcycles in Chikmagulur, and our first ride impressions are online, we spent a lot more time with the 502 X, riding it over 900km back to base in Mumbai. Here's how it performed during an extended road test. 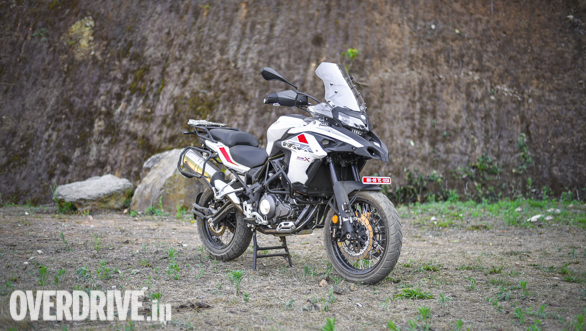 But first, allow me to tell you about the design, because it is one of the basis while making that big bike purchase, no? If you are the kind that loves a machine that has commanding road presence, the TRK 502 X is unmissable. And that's down to its sheer size. It's dimensions are almost at par with higher capacity adventure tourers and that effect is enhanced by its large, 20-litre fuel tank, tall windscreen and adventure motorcycle-correct beak. The rear portion in contrast has minimal panels, with the exhaust positioned almost as high as the rear subframe. 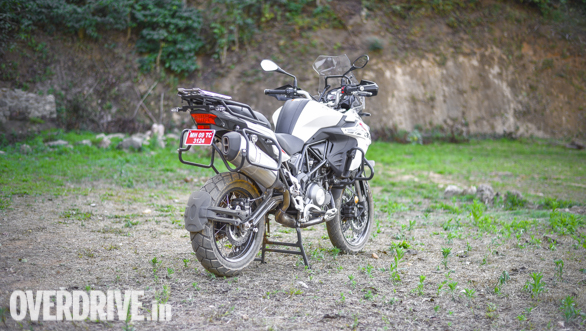 The quality of paint as well as fit and finish is good, better than previous Benellis but certain areas, like the exposed welds on the swingarm could've been finished better. The windscreen is not adjustable, a glaring issue for an adventure bike and you can't help but wonder why Benelli chose solid metal over plastic to mount it. In fact, there are many areas that could have been made of lighter materials, which explains the 200kg+ kerb. It's this one factor that has a significant bearing on the way this motorcycle rides and handles. More on that a little later.
But, in all, the design is purposeful and the standard crash protection is great in terms of value. Benelli will also sell you panniers and a top box, that'll collectively set you back by Rs 70,000.

The ergonomics are one of the strong points of the 502X and after spending close to 14 hours in the saddle, I have to say that I wasn't as tired as I'd thought I'd be. The seat is wide and long, allowing the rider to move around. The pillion seat is equally comfortable, the wife attests to that. 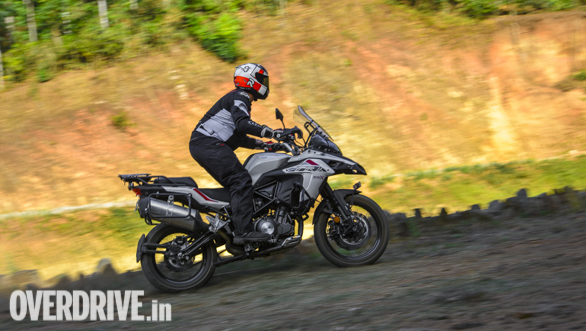 That said, the seat height, at 840mm is 40mm higher than the 502's, which is quite tall, keeping the average Indian's height in mind. I'm 5ft11 and I could not keep both my feet firmly on the ground. Benelli will offer a low seat height option, sometime in the future. The handlebar is close to the rider and considering the position of the footpegs, it results in an upright riding position. The issue is the shape of the tank that makes it difficult to grab on to it while standing on the pegs and riding. It's a critical design flaw and surely a game that form won over function.

The TRK employs a 500cc, liquid-cooled, in-line twin engine that develops 47.5PS at 8,500rpm and 46Nm at 6,000rpm, mated to a six-speed transmission. On paper that may not seem enough, considering the 200+ kg weight but in the real world, the bike doesn't feel underpowered. 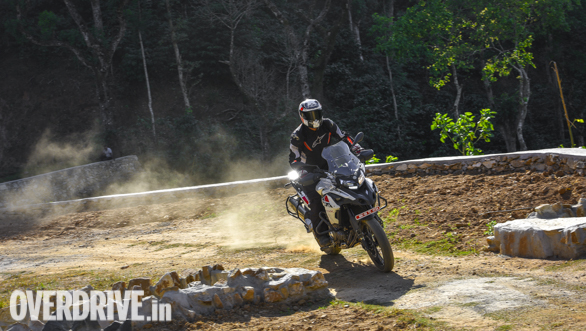 In the sprint up to 100kmph, the vbox registered a respectable 7.4s, considering its high kerb weight. Power delivery is linear and as long as you don't expect blazing performance, the TRK will keep you happy. The other aspect about the motor that ticks the right boxes is its tractability. You can pootle around in sixth at 45-50kmph and all you need is a twist of the wrist to pull an overtake. Even on the highway, riding at a steady 130kmph, you don't need to downshift to overtake and that again highlights the flexible nature of the engine.

The concern is that the motor gets buzzy after 110kmph and you feel mild vibrations in the footpegs, fuel tank and handlebar. Benelli has tried to dampen this by using thick rubber pads on the footrest and handlebar grips, which makes holding on to 120-130kmph possible Anything beyond that and the vibes increase considerably. Realistically, 120-130kmph is the apt pace to maintain, especially during long rides and the TRK hold that speed without any fuss. The motor's tractability also translates to good fuel efficiency and out test bike returned 24kmpl in the city and 28.5kmpl on the highway. 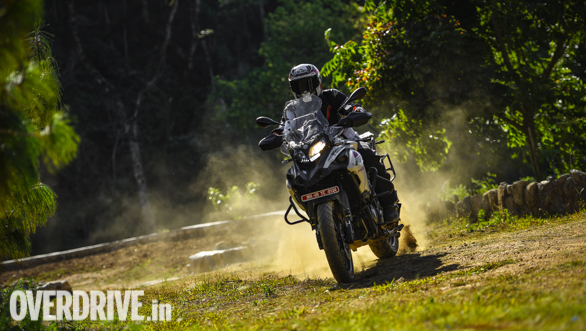 The 502 X, clearly with its off-road focussed approach has a soft suspension set-up, as well as long travel that does a good job of ironing out most of the rough stuff, tarmac or otherwise. On the highway, the ride is composed and the TRK 502 X feels planted and confident. Even in the corners, despite the 19-inch front and dual-purpose pattern tyres, the bike stuck to an intended line. Speaking of the tyres, Metzler Tourance tyres deserve a special mention here. They offer good grip and feedback on paved surfaces as well as on loose mud and gravel. But don't expect to venture too far or engage in some dune bashing. You'll definitely need a set of knobbies for that and probably a gym session to handle all that weight. Yes, that's the biggest drawback. Out on the narrow, coffee estate trails in Chikmagalur, it took some effort to back it up while executing a U-turn. And if you happen to drop the bike, it'll take more than a pair of hands to pick up the bike. 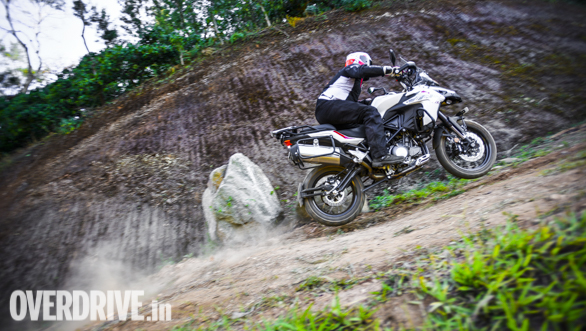 There is no denying that the TRK 502 X is a pretty competent adventure tourer. It looks good and it's pretty well-built as well. More importantly at Rs 5.4 lakh ex-showroom, there's nothing in the vicinity that can compete with the road presence, comfort and value that the Benelli TRKs bring to the table. The only niggle is the engine that could've been a little more refined, especially at the 120-130kmph mark, a speed that's ideal for long hours in the saddle. Also, a non-adjustable windscreen is a glaring omission that we hope Benelli addresses, in the next iteration, along with some fat trimming. All said, it all boils down to this. If you are in the market for a full-size adventure tourer that's comfortable and can hold decent highway speeds, the TRK 502 X builds a strong case for themselves. It's up to Benelli India now to provide the right sales and service support to its customers, which will go a long way in making the TRK 502 X a hit among the big bike aspirants.