What is this nonsense? This is a 3 Series? The 320d went up the mountain road with so much composure and refinement that the spell was broken. This is the most sporty 3 Series BMW has ever made? It felt more like a smaller 5 Series - gentle, comfy, quiet and smooth - than what you expect the 3 Series to be - sporty, feelsome and if needed, noisy enough to fall on the boisterous side of youthful. 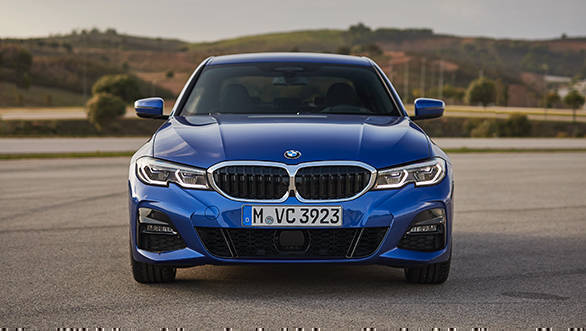 The new BMW grows a larger kidney grille, the new headlights link up with the grille and the sharper lines do look nice. The modified NACA duct motifs for the brake ducts, with LED driving lamps are interesting

It wasn't until I got to drive the M340i prototypes around the intense Portimao circuit in the Portuguese Algarve that I understood it. But let's start at the very beginning. 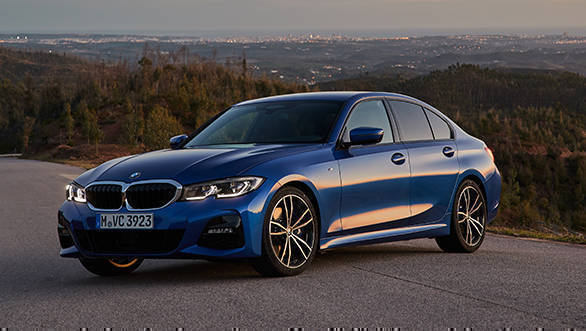 The 2019 BMW 3 Series sits on a 41mm longer wheelbase than the outgoing car. The underbody is completely flat to help reduce drag coefficient

This is the seventh generation of the 3 Series you're looking at. This is BMW's biggest selling car of all and one-third of them go to China, and another 40 per cent or so are sold in the US and in Europe. This time, the 3 Series is based on the same CLAR platform as the new 7 and 5 Series cars. Inasmuch, it sits on a bigger wheelbase, and it is longer and wider. They all are now, yes? 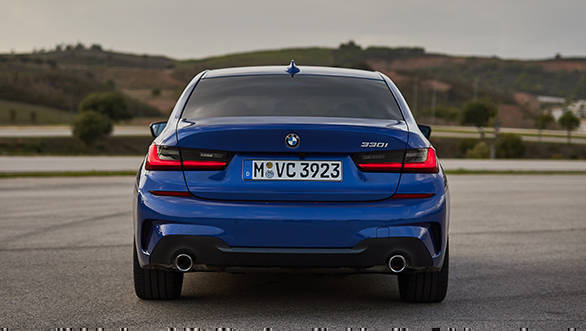 In the new design direction taken by the 3 Series, the taillights now feature a L-shaped motif 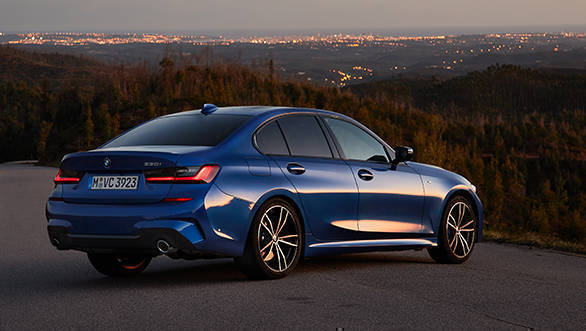 The 3 Series is bigger, wider and longer, sits on a longer wheelbase, and is based on the same Cluster Architecutre platform as the new 7 and 5 Series cars 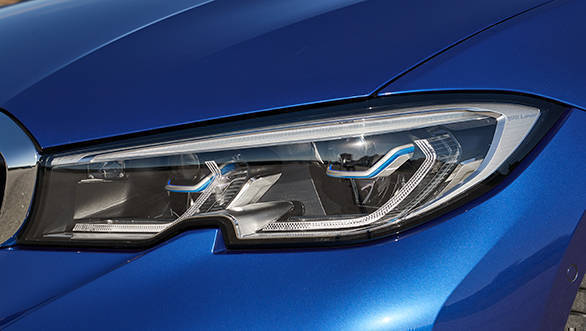 The larger car wears styling more in tune with what BMW uses today. The kidney grille is massive and whatever of the width is left is given over to the headlights. The suite of forward-looking radar creates a v-shaped design element on the air dam on some of the cars which is an interesting detail. BMW designers also say that the notch at the bottom of the headlight reminds you of the fourth generation 3 Series. Does it? The headlight unit itself is styled in great detail and it looks busy and technical. The side body has a handful of lines that break up the form and above that, Mr Hofmeister actually sits behind the actual glass area. The bootlid area features the new L-shaped tail lights that bulge outward which I didn't fancy. But the contrast of dark elements and a thin light shape looks smart to me. 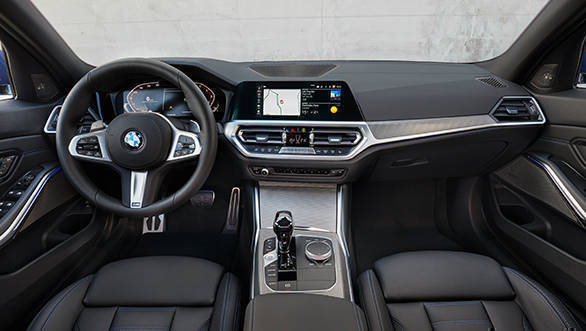 The fat steering wheel sits in front of a screen that has been executed really well. The details are easy to read and the wide space between the dials at the edges is used rather well

Inside, there are new screens. Our test cars were equipped with the optional screens that place two huge screens in your cockpit. The one behind the steering wheel is smashing. The edges of this one are taken up by a speedo (left) and a tacho (right). In the middle is a vast expanse that displays information - mode selections, warnings, navigation and more. I loved how BMW has organised information on this screen. They say that the BMW operating system 7.0 includes a complete UI/UX rethink. And I think they've nailed this part of it.

The other screen is a touchscreen that sits atop a simple centre console. It's easy to use by touch, by iDrive controller or BMW's gesture control suite of which I am not a fan.

The new thing there is the "Intelligent Personal Assistant". BMW says this can interpret natural language to some extent, help you reach sub menus directly and more. And wait for it, you can rename it to anything you want. 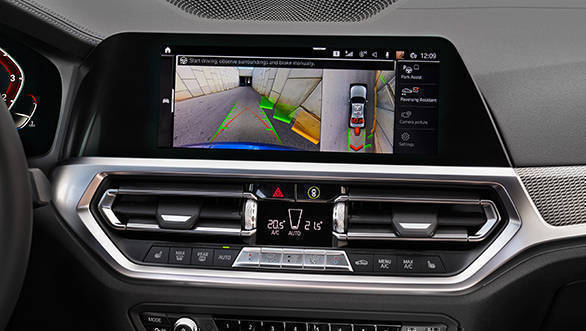 The centre screen is a touchscreen but this size is optional. It also includes a new voice interface that debuts on the 3er which, unfortunately, understood almost nothing of what we said

But we ran into heavy weather trying to get it to work. Renaming it to Ramesh produced a "not enough syllables" warning. And most of our other enquiries produced either a "Say help" or "That option isn't available" response. The idea is a good one but the technology BMW is using isn't on the same plane as Alexa or Google. As usual, carmakers trying to keep these parts of the car proprietary slows the rate at which these technologies evolve and mature. 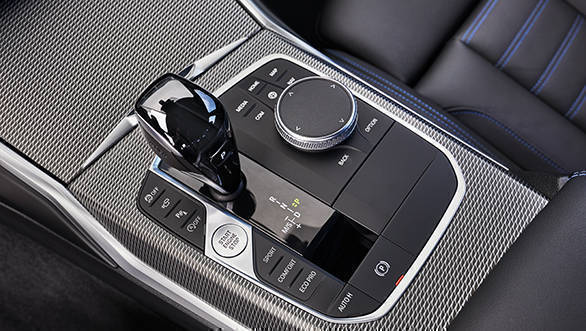 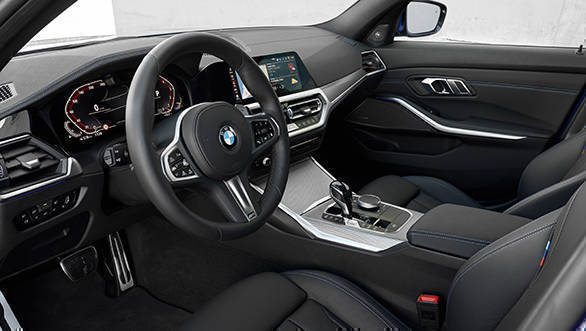 Can you see how different the BMW 3 Series is from the expectations? We're 600 words into a 1,000 words and the car hasn't slip, spun up or produced a smile yet.

The reason for that would be the 320d. This was the car we drove first. And it's a superb luxury car firmly in the 5 Series mould. The engine is startlingly quiet from inside the cabin - our cars had acoustic glass not just on the windshield (standard), but on all windows. Even in Sport mode, the car remains quiet. 400Nm from the lag-free engine means progress isn't slow but that sense of excitement is muted. And with 235-section tyres and a notably stiffer chassis, the 320d absolutely refuses to be ruffled. So while mid-corner bumps are absorbed with fluid ease, here's a 3 Series that goes where it is pointed no matter how hard you provoke it. 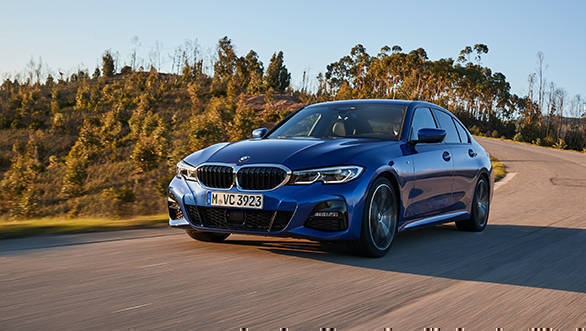 Fun car? Not in the old-school 3er way. But for the average Indian 3 Series buyer, the 320d promises to be a luxurious, spacious and comfortable car to be driven about it and a reasonably involving car to drive on the weekend.

Does that not strike you as odd for a 3 Series? The 330i with M Sport suspension rectified this somewhat. The petrol engine feels more alert, is more vocal (some of it is, of course, amplified engine noise played back at you), and of course, it's got 70PS more to play with. The optional suspension immediately made the car feel more taut and feelsome. And also, more thud-dy over the bumps. But on the flip side, the extra power pushes the extremely composed chassis closer to the edge which felt more exciting and involving to drive. 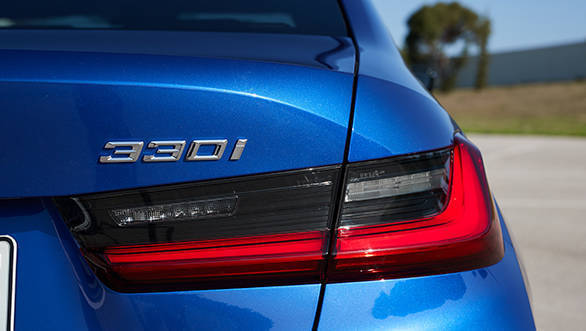 But the true magnitude of why the new 3 Series is being billed as the most sporty 3 er ever became clear with the M340i. Now these cars, provisionally, have the 6-cylinder petrol with 375PS and 500Nm. On the Portimao circuit, this engine showed what the chassis is capable of. Where the 320d/330i were well contained by the sheer ability and composure of the chassis, the M340i felt like the balance was just right.

Get to early on the power and the Sport Plus mode would allow smooth slides that felt easy to modulate even more me. Corner speeds were high and all through, the 3 Series felt like it was responding to your inputs and giving you all the feedback you needed.

BMW doesn't really have a choice about the direction the 3 Series needs to head towards. Cars are getting bigger, more online, more electronic and more automated. The new 3 Series is all of these things. But the rising ability also means that driver involvement and enjoyment - a hallmark of the 3 - ramps up only for the very fastest of the engines. 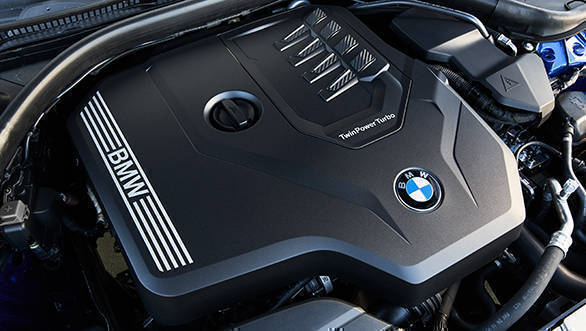 Unsurprisingly, the petrol engine in the 330i feels more alert than its diesel counterpart in the 320d

The other way to look at this would be to realise with shock and awe that BMW has the M340i which feels like the most capable, sporty 3 Series yet. And within the same family is the calm, quiet, efficient 320d which has all the best attributes of the 5 Series down pat. 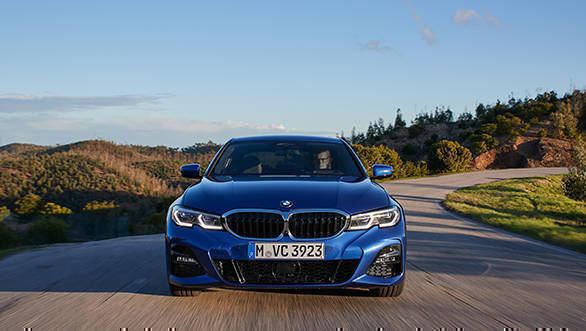 Excited? The 320d and the 330i should arrive in June 2019 featuring minor price rises and more standard equipment than before. As usual, the M Sport kits and accessories, the all-new M3 and the M340i will show up in time to join the line. Globally, the M340i and the 330e plug-in hybrid are expected to debut roughly at the same time as the India launch of the new 3 Series.