The middleweight adventure touring segment has witnessed rapid growth in the past few years. A big reason this growth is the fact that an increasingly large number of bikers want to see the world on two wheels today  I myself have several friends who have traded their cruisers or streetbikes for middleweight ADVs! Another reason I feel is that most full-sized adventure tourers are too big, too powerful and too heavy today, making them a little too unwieldy for a lot of riders, on the road or off it. This is why a lot of experienced riders are also looking at the middleweight ADV segment today. 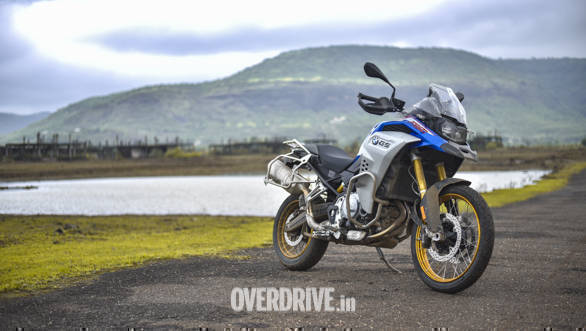 BMW Motorrad entered the segment in India less than a year ago with not one but two motorcycles, the F 750 GS and F 850 GS. And now it has launched a third offering in the space, in the form of the BMW F 850 GS Adventure. As the Adventure suffix would suggest, the 850 GSA is meant to be a machine intended to blend long distance touring to go-anywhere abilities even further. Of course, when BMW Motorrad uses that suffix it promises serious abilities. Case in point being its legendary full-sized ADVs like the R 1200 GS Adventure and now the R 1250 GS Adventure as well. 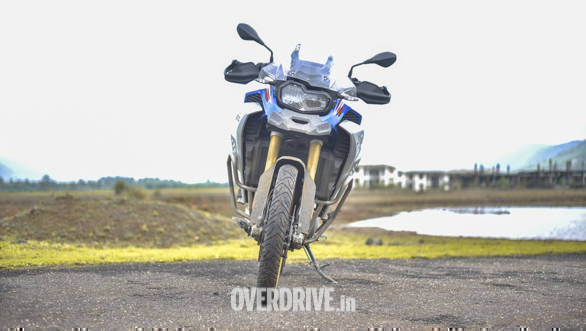 So what has changed?

The biggest change is the 23-litre fuel tank. 23 litres is a lot, be it from the perspective of tank range or maneouvering a motorcycle with that much fuel! Motorrad's primary intent was to obviously offer a higher tank range so you're not searching for a petrol bunk, say, in the desolateness of a desert or a remote, snow clad village on the rooftop of the world. And the bigger tank has made the 850 wider to the point where it looks almost as wide as the R 1250 GS when viewed head on! The bodywork is more aggressive but the face remains unchanged and the distinct-looking LED lights confirm this is the 850. There's bunch of goodies this bike gets as standard though, which is more interesting 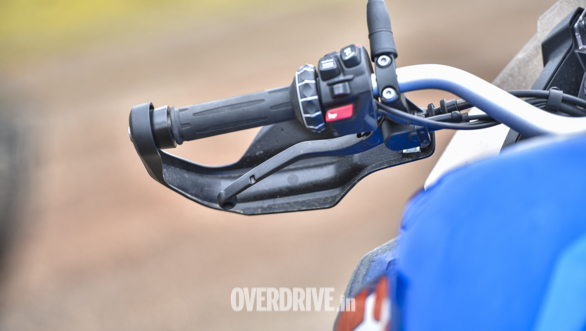 The 2019 BMW F 850 GS Adventure gets a whole lot of kit as standard, including the hand/knuckle guards you see here. Also notice how the clutch lever (and front brake lever for that matter) is positioned at a lower angle to allow you to use it comfortably when standing up on the pegs and riding. Also, notice the rotary iDrive-like controller for the menu functions of the digital instrument cluster

Like the knuckle/hand guards, crash guards for the engine and steel luggage racks. I also like the silver hued side panels better as they look more purposeful, especially with the 'drilled' holes. Heck, even the clutch and front brake levers are angled lower so they're easier to use when standing up on the pegs! The list of standard equipment also includes anti-slip, full metal footpegs which do offer lots of grip even in the muckiest of conditions. The Adventure also gets a taller, height adjustable windscreen which offers ample wind protection even at 180kmph, despite looking shorter than the screens on many new-age ADVs. Overall the 850 GSA thus looks more purpose-built and has more visual appeal than the standard 850 GS, especially in this rallye blue paint scheme.

Our test bike was also running some (expensive!) optional equipment. These include the 6.5 inch TFT display for the instrument cluster along with the iDrive-like rotary controller, as also the ZF-sourced semi-active, electronically controlled rear monoshock which Motorrad calls the Dynamic ESA. These are value adds and not merely ornamental bits though. The screen provides access to a range of functionality on the go via the rotary controller, including Bluetooth connectivity for smartphones to let you control phone calls and music apart from on-screen navigation. Damping and preload for the rear monoshock are adjustable via a dedicated switch, apart from which its settings change when you change riding modes. Our bike was also equipped with the Pro Pack that includes Dynamic and Enduro riding modes in addition to the standard Rain and Road, but more on that later. 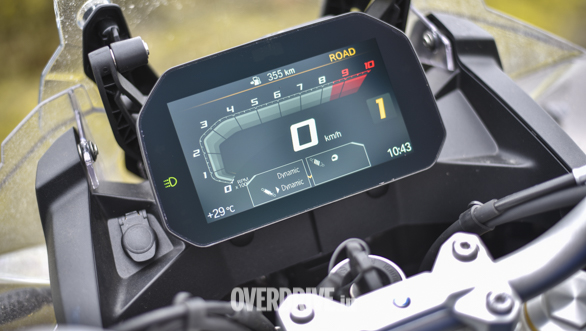 The 6.5 inch TFT display is an optional extra, but offers a plethora of information. And if you spec the bike with the optional electronic, semi-active rear monoshock, the screen also lets you adjust preload and damping via a dedicated switch

Nothing has changed here from the standard 850 GS and the Adventure is powered by the same 853cc, liquid-cooled, parallel-twin cylinder engine. The motor has been detuned for India given our quality of fuel and offers 90PS and 86Nm here, as opposed to 95PS and 92Nm internationally. The engine uses a 270 degree firing order which makes for a throatier soundtrack, especially at full clip. The engine also feels smooth and refined, though there is a bit of buzz towards the top of the rev range. The engine is mated to the same six-speed transmission as the standard 850 and ratios are identical too. You also have the option of going in for a bi-directional quickshifter that works best when you have the throttle wide open. Part throttle gear changes are not the smoothest and called for more effort than I would have liked. This wasn't as much of an issue on highways, but was a concern in traffic. Riding in traffic also had me realise the parallel-twin motor tends to heat up a fair bit at slow speeds and a lot of the heat is sent to the rider's legs, which will not be very pleasant in summers. 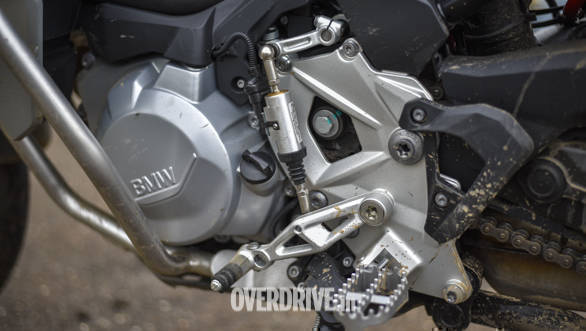 Comfortable ergonomics are the essence of touring motorcycles and the 850 GS Adventure boasts excellent seating. Spending long hours in the saddle is not an issue thus, though seat cushioning could have been a wee bit softer. Thrust from the engine is impressive and getting to and sustaining triple digit speeds is never a concern and on a lot of occasions I thought I was doing about 100kmph on the speedo only to realise I was clipping at over 120kmph! The 850 GSA is thus a veritable mile muncher and 1000km days should be remarkably easy. Interestingly, while the rear optional rear monoshock offered electronic adjustment, the front forks are at the other end of the spectrum and are not adjustable at all. Despite that the setup is impressive, be it in terms of the forks' ability to soak up ruts, potholes and pretty much everything on our roads, or offer a stable feel at high speeds. 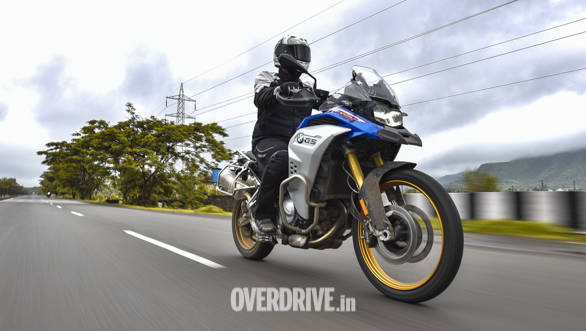 The rear monoshock allows the bike to glide over broken roads and overall comfort is excellent, as you would expect of a touring machine from BMW. Switching to Dynamic mode has the rear monoshock stiffen up a bit to aid handling but that does not come at the expense of a good ride and does not really affect its ability to soak undulations. I encountered wet roads intermittently and the bike's confidence and composure in the wet is commendable. Handling overall is thus impressive, though the 21 inch front wheel did rob me of some feel around fast corners. The road-biased Michelin Anakee tyres also had a role to play in the high confidence levels afforded by the bike on road, as they offered lots of grip at all times. But... 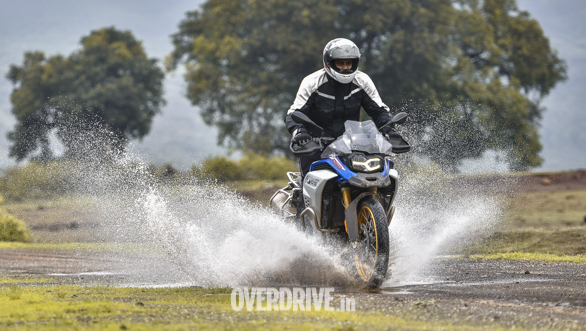 The electronics on the 2019 BMW F 850 GS Adventure ensure the bike stays planted and does not lose composure at all times, irrespective of the surface you are on

The 850 GS Adventure is meant to be ridden off-road as well, extensively. And it impresses, extensively. At 244kg the bike is heavy but there was nary a moment when I felt its weight and its lightness and agility on the loose stuff are surprising. On dirt is where the 21 inch front wheel lets the 850 GS Adventure dig in and feel confident but the Michelin Anakees were a caveat in my case though. As I mentioned, they are road-biased and limited the bike's abilities on the fine, wet soil I was riding on. The thin layer of wet grass on top of it made matters worse and once the mud had accumulated in the tyre treads, it felt like I was riding on glass. I was left wanting for feel and feedback thus and the bike didn't feel very confident on trails either, for the same reason. I have to mention though that the suspension and chassis felt like they have a lot more to offer than what I could extract. 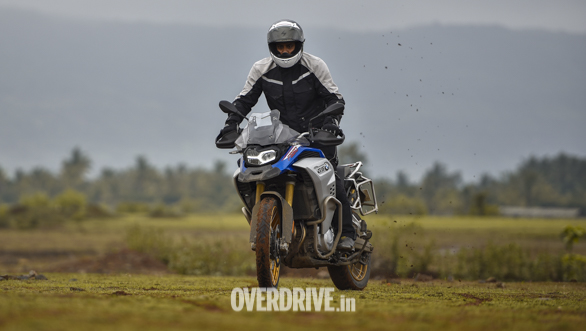 Sliding the 850 GS Adventure was very easy thanks to the tyres though! Enduro mode makes having the rear step out and stay there surprisingly easy. What wasn't easy though was getting good feel or feedback from the tyres. I strongly feel a set of dual-sport or knobbly tyres will work wonders and allow you to explore the 850 GSA's playful side far better. Electronics have a huge role to play here, as the precise throttle control lets you decide exactly how much you need to twist that wrist. Electronics also made sure slides never got out of hand and the rear came in line with the front once the throttle was closed without any theatrics. The experience was equally impressive when riding fast on gravel as the power sent to the rear wheel was being metered precisely as per the surface, even with the throttle pinned. The 850 GS Adventure is thus immensely capable off-road, with its USP being the agility and nimbleness. Strong bottom-end grunt from the parallel-twin motor means the 2019 BMW F 850 GS Adventure, despite its near 250kg kerb weight is always willing to rear it head

The BMW 850 GS Adventure does its intended job of blending distance touring to off-road abilities better than the standard 850 very impressively. It feels comfortable on tarmac and handles well while boasting some serious off-road capability and its off-road abilities in fact are comparable to higher-specced full-sized adventure tourers. This, while feeling lighter and nimbler thanks to its relatively lesser weight and compact dimensions. That said, its direct rivals in the country are the Triumph Tiger 800 XCA, Ducati Multistrada 950 as also the Honda Africa Twin CRF1000L. Its equipment list is impressive too besides the fact that this is a BMW and build quality and overall feel are in line with what we have to come to expect of the premium German brand. The bike retails at Rs 15.40 lakh ex-showroom sounds expensive for a middleweight ADV, but as I mentioned it is comparable to machines belonging to a segment above it. In that sense the 850 GS Adventure is a very impressive package and certainly a machine you should consider if planning on taking a sabbatical from work and touring the world on a motorcycle.