The Grand i10 Nios is the newest addition to Hyundai's line-up in India and that makes it their fourth hatchback model-line on sale at the moment. All four of them reside between `4.5-9.5 lakh, and that might seem like one too many! The Nios fits into the line-up between the Grand i10 (prices of which have been cut) and the Elite i20. Hyundai is aiming this car at young families, single owner-drivers and other such upwardly mobile groups. People who want a small car but are also looking for something that is stylish, modern and with a feel-good vibe. Time then to find out if the Nios delivers on these promises. 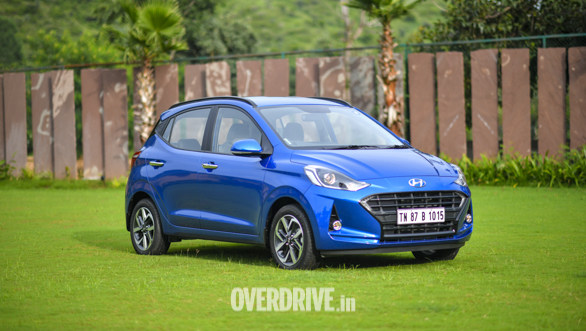 Tell me more about the design

The Grand i10 Nios is an interpretation of the brand's Sensuous Sportiness design philosophy. This isn't just about a dynamic family face, claims Hyundai, but has more to do with the energetic thought behind the car. This influences the Nios' sharp bonnet creases, the lines which grow out of the lighting elements to add more depth and in the car's silhouette. 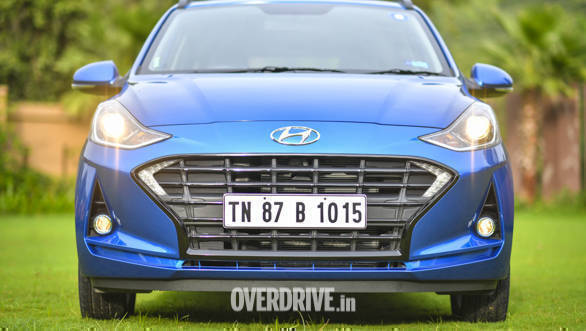 Then there's the large cascading grille and the swept projector headlamps. This arrangement debuted on the Santro but works better here, mainly due to the sharper details around it. The boomerang DRLs in the grille lend the Nios a unique identity, amplified by the cuts on the bumper and the projector fog lamp insets, although auto headlamps have been given a miss. The honeycomb pattern to the head and tail lamps and on the C-pillar plaque add that last bit of flair, although a bit more sharpness in the bootlid and LED elements in the rear tail lamps would have been a more cohesive choice. 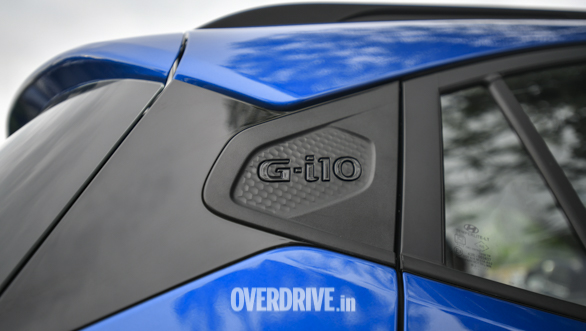 The floating roof effect is great and is a perfect example of how the latest Hyundai designs meld curves and sharp lines, but the glass area below it feels a tad large and interrupts the look of the car when seen in profile. Offsetting this is the fact that the Nios is now 40mm longer (3,805mm) and 20mm wider (1,680mm) but no taller (1,520mm) than the Grand i10. 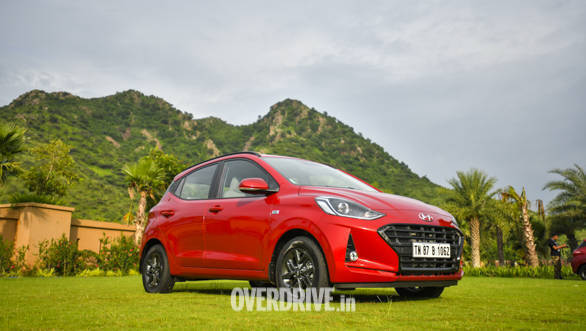 The new Grand i10 is offered in single-tone and dual-tone colours. In a smart strategy that started with the Santro, the Nios is available in different trim combinations. While the white and silver cars come with a grille finished in silver, the grey, red, blue and teal cars replace the same with gloss black. The teal and white colours are also offered with a black dual-tone roof. This also gets you an all-black interior with teal and red inserts respectively. These versions also get more features in only the higher-mid Sportz petrol variant that they are available in, adding projector beams, 15-inch diamond cut alloys, a leather-wrapped steering wheel and wireless charging from the top Asta trim. 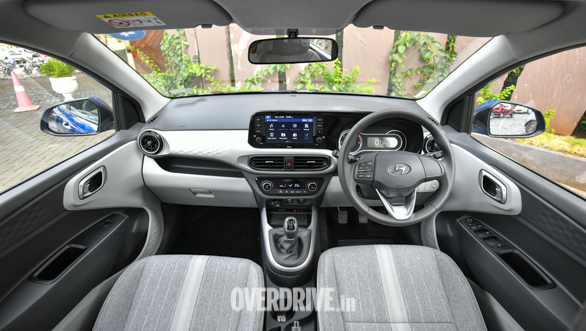 What about the insides?

Hyundai has added 25mm (2,450mm) to the Nios' wheelbase but that'll be the last thing on your mind when you step in. That's because of how well Hyundai has used materials and textures at this price point. General plastic quality, fit and finish has stepped up further, even in places that you wouldn't touch too often like the lower part of the footwell and doorsills. 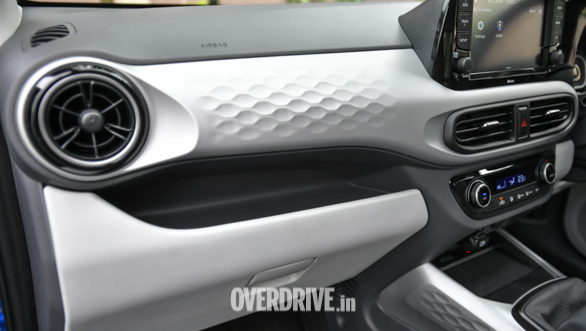 The real sense of quality comes with how the door pads, the top of the dash and the satin-finish inserts are all hard plastic but feel that slight bit different to touch. Another intelligent bit is that the ornamental honeycomb elements from the outside are used inside too, they help break up the monotony and add more texture to all these parts of the cabin. 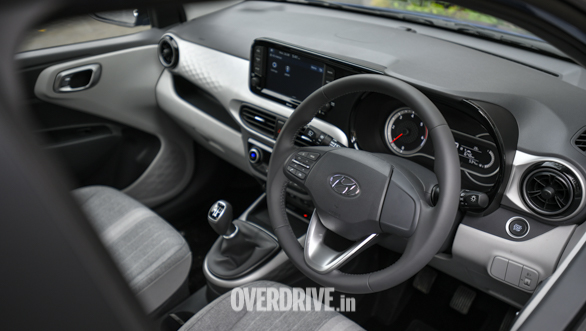 The layout further complements this. The dominant feature is the floating 8-inch infotainment which melds into a large 5.3-inch semi-digital display. This gives you a large digital speedo, trip data and fuel gauge. The AC vents have a premium damped feeling to their adjustments, especially the large turbine-style ones on the side. This high-quality feel extends down to the climate knobs and on the buttons for the infotainment. The screen is the same as the one on the Venue but misses out on the BlueLink connected car suite. We feel this is a misstep for a city-friendly hatch which will see many first-time drivers, but the Nios claws back some ground by offering a driver's rear-view monitor and app-based audio controls via the iblue app. The switchgear is standard Hyundai fare, feeling substantial and easy to use. There's a 12V power outlet front and back, three USB ports in the front and wireless charging on top variants. Thoughtful additions, given the young buyer that this is aimed at. 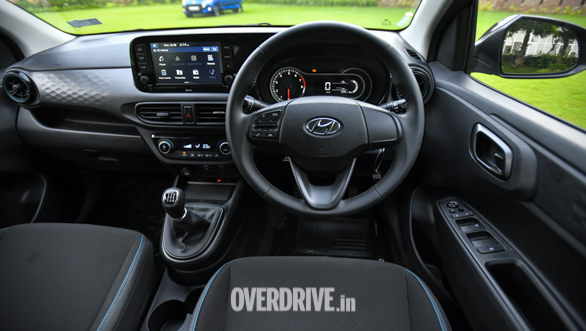 Once in the driver's seat, you'll notice that the view in front could have been better. Sure the driver's seat and steering column are adjustable, but you can't see any part of the heavily raked bonnet from inside, the highish dash not helping. Things become better when you realise that the glass area we didn't like earlier, now gives you a good view of the side and back. The only other discomfort we felt was with a slightly cramped footwell and pedals which seemed angled slightly too upward. The uniquely grey seats are well-cushioned and provide good support up front. Their catchy grey cloth upholstery might attract stains easily but are a better bet for our climate. 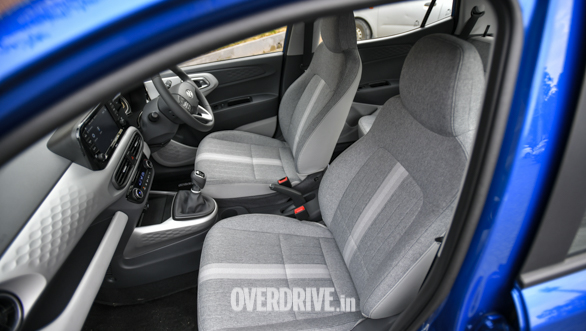 The rear hasn't changed much from the last car in terms of space. So it's best meant for two people, the slight hump in the middle and the new rear AC vents, a great addition otherwise, not helping the third passenger further. Legroom is quite good with good under-thigh support. The boot volume has increased by 6 litres to 260 litres. Hyundai could have improved on this by offering a 60:40 split but that isn't available. 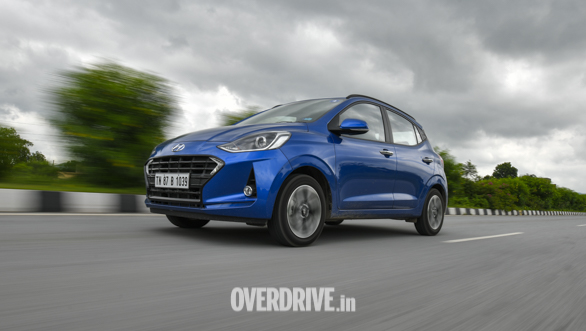 It's great. The Nios has possibly the most sorted mechanical package of all small Hyundais. A big component of this is the 1,197cc Kappa 4-cylinder petrol motor that our car came with. It's the same as earlier but is now BSVI compliant and makes a similar 83PS at 6,000rpm and 114Nm at 4,000rpm. Hyundai claims a 20.7kmpl ARAI figure, it's not class-leading but is still good for this segment. 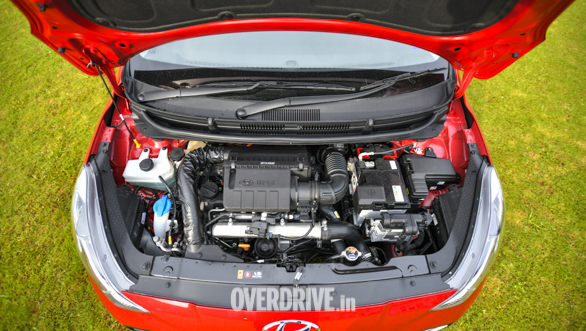 The headline here is that Hyundai has retuned the motor and made driveability even better than before. Power delivery is linear throughout and the car is happy to potter around in the city, in slow-moving or even stop/go traffic in second or third gear. This isn't the most free-revving of engines but its ability to stretch out each gear is great. Even on the highway, it'll happily sit at a gear higher, or lower, than ideal without complaints. The engine is audible once revs start to build but it's a muted thrum at most times that doesn't intrude. The diesel engine has a thrummy note too beyond 3,000rpm, not gravely like its 1.3-litre competitor. 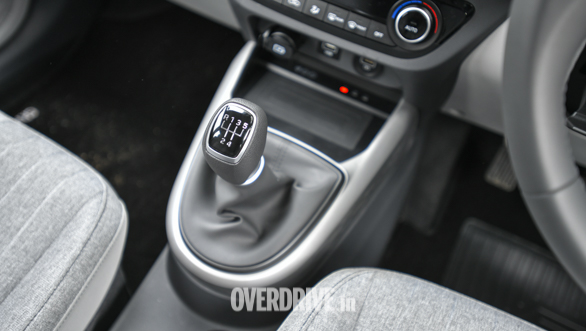 The only real aberration in this entire package is the gearbox. The 5-speed unit is paired with a progressive and light to use clutch. This seems to bring more focus to its long throws and vague operation where we found it difficult to slot a gear cleanly into its gate on a few occasions.

We liked the AMTs though. They are quite smooth in their operation and fairly quick to react. They drop up to two gears at heavy throttle input, so highway overtakes aren't a worry either. There is a noticeably long shift-pause between 2-3 on both AMTs though, not so much in the other gears or direction. The pause in the diesel is more noticeable than petrol. 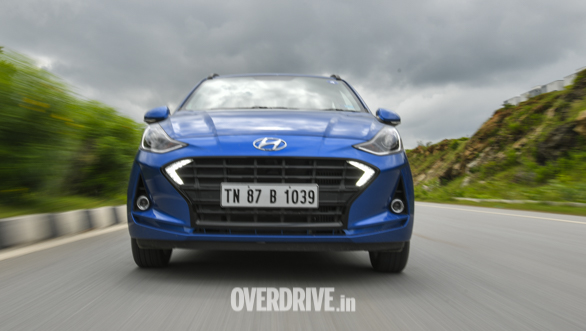 The Nios' ride and handling character impress further. The steering wheel is the same, nice to hold unit from the Venue but functions better here. It is light at city speeds with no dead patches, although some vibrations filter through here and the pedals. There's not a lot of feedback but it weighs up very well as speed builds and has a nice damped action to it. This adds confidence, that is especially noticeable during highway lane changes and so on. 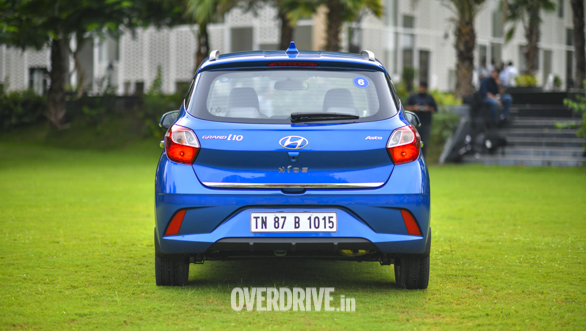 The Nios is based on a reworked version of the brand's K1 platform. This underpins cars like the Santro but improvements have been made to the suspension set-up to cope with the larger dimensions. Body roll is well-controlled and the car maintains composure on most occasions. It won't be the quickest to change directions but there is a sense of assurance to it. Ride quality is also a step forward. The suspension tackles out most imperfections very well at any speed, only letting you know of them via muted thuds. The only sensation that filters in is a slight springiness that is felt over sharp, abrupt undulations, more so in the diesel. NVH levels are passable for this class of car with wind and tyre noise evident at highway speeds. The brakes are good too, the pedals have a nice, hefty progressive feel to them with enough travel, so you'll never really get caught out. The car maintains composure even under heavy braking. 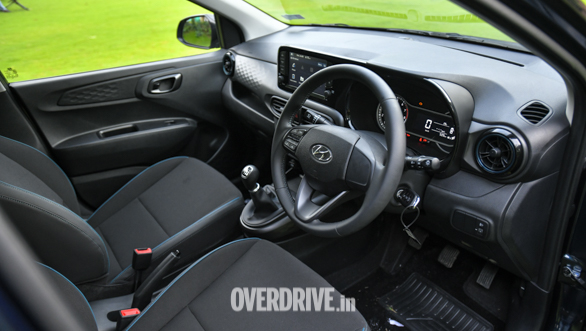 But will I be safe driving it?

Reasonably, but there are a few misses. The Nios gets all the mandated safety equipment like dual airbags, ABS with EBD, seatbelt reminders and a speed alert system but that is largely it. Hyundai has strengthened the structure with more high-strength steel and made it crash test compliant as compared to the Grand i10. Some optional safety equipment like ISOFIX seats, side and curtain airbags or a stability control system would have rounded off the package better. This hatchback's closest rivals get at least some of these things in their top trims. 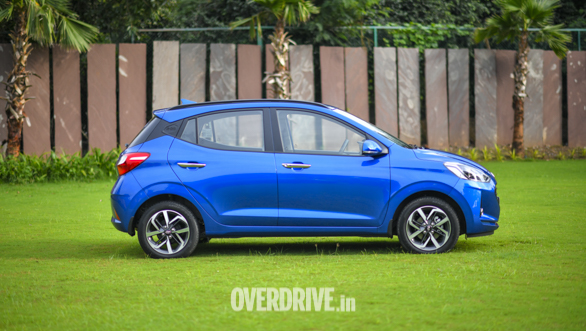 A good buy then?

Yes, definitely. The starting Rs 5.9 lakh (on-road Mumbai prices) for the base Era petrol undercuts its competitors marginally but the Asta petrol, we drove, comes in at `8.37 lakh. This puts it between the equivalent Swift and Figo. The top trim is the diesel manual Asta which costs Rs 9.51 lakh. 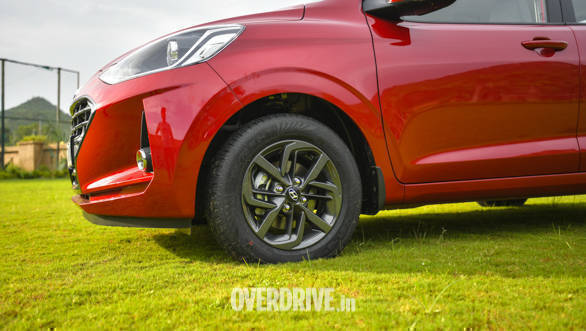 The wider spread of drivetrains is another good move. There is a diesel AMT for the first time in a Hyundai, alongside a petrol AMT. So there's something for most use cases, as long as you don't want a fully-loaded automatic. This scope is further widened by the unique variable standard warranty packages that Hyundai has introduced with the Nios. The Nios can be had either with a 3-year/1,00,000km, a 4-year/ 50,000km or a 5-year/40,000km scheme. 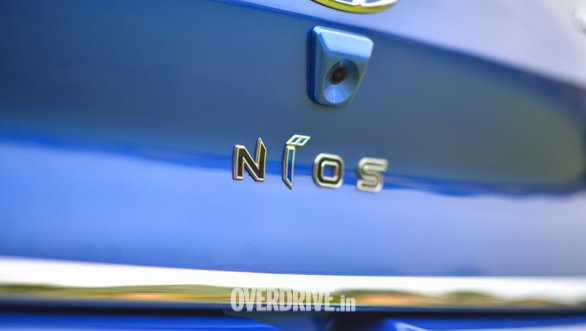 In this sense, the Grand i10 Nios derives its value from the sophistication of its package. You miss out on a few features and safety tech but get stylish looks, a special-feeling interior, peace of mind and a dynamic package that has something in it for everyone. And these things combine in just the right way to make a package that meets its young-buyer brief quite well.