There's always been something about just walking up to the V-Cross, and climbing in, that makes you want to skip work, and head out on a long drive  even better if that drive takes you to a lakeside, or any other suitably idyllic or adventurous location depending on the mood. But, for when you run out of sick days to call in, you'll find that the refreshed V-Cross works exceedingly well even in the daily grind. And that's almost solely down to the option of having one with an automatic gearbox now, only available with the new 1.9-litre turbo diesel engine on the range-topping Z Prestige (High Plus) model. 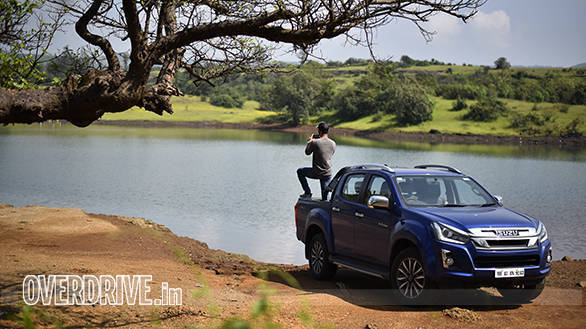 What else is new?

Starting at the front of this top-end model, there's a new chrome grille (very subtly changed) with extensions that go into the LED projector headlights with LED DRLs at the bottom, redesigned fog lamp cutouts in the bumper with more chrome, and more chrome on the rear bumper. The refreshed model runs on 18-inch alloy wheels with 255/60 sized rubber now, compared to the 16-inchers it had before. We know not many owners kept that aspect of their V-Cross stock but we guess these are a better starting point when choosing more hardcore rubber. Inside, it's all black, there's more speakers (including roof-mounted ones), new leather upholstery and six airbags (!). Of course, there's also the new engine and gearbox, which we'll get to. 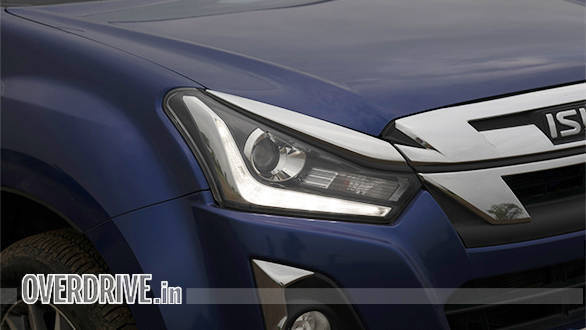 Overall, the effect the new cosmetics have is to make the V-Cross look just slightly more modern. Rocking some of the largest dimensions figures we've seen yet of any vehicle on sale in India, at 5,295mm long, 1,860mm wide and 1,855mm tall with a 3,095mm long wheelbase, it's still as intimidating as ever. Though, in its new Sapphire Blue colour, the V-Cross looks quite a bit more urban. Despite the larger wheels, there's still a lot of air to close the gap to the sculpted wheel arches, especially at the rear, but that's a tradeoff of having that deck with its 235kg carrying capacity; which when loaded does help settle the height. 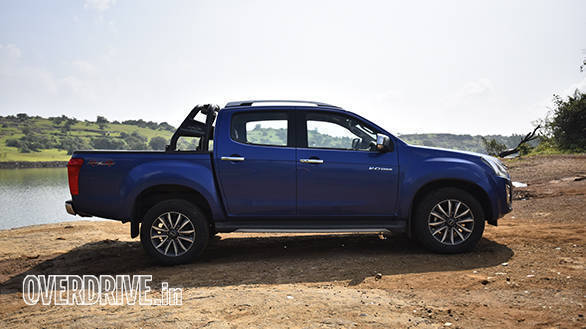 Largely the same as before, but now in an all-black configuration that feels more suited to the V-Cross' intended purpose, since it'll show less dirt. It's also more premium feeling, with plush leather panels on the dashboard, above the instrument binnacle and on the arm rests on the doors. 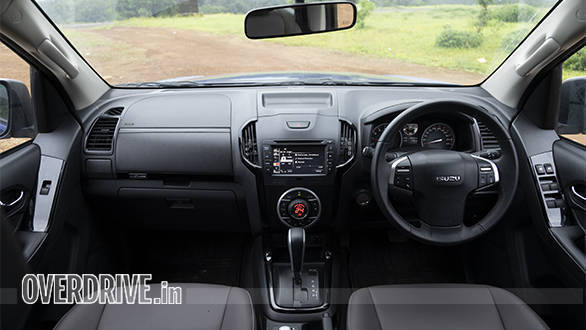 The carbon-fibre like weave used in the central portion of the seats is a nice touch, offset by the dark brown upholstery. Unfortunately, the touchscreen infotainment remains unchanged and feels basic, with no smartphone connectivity other than Bluetooth, or AUX. But the audio quality is much improved thanks to the extra speakers. A parking camera is standard, as are parking sensors which are much needed. Ergonomically, the ORVM adjustment switches are hidden from view, behind the steering wheel and can't be operated just by feeling your way around in a hurry. As before, the seats are large and comfortable, both front and rear. The driver's seat is powered, while the rear bench could be a little upright for a long drive, but there's enough kneeroom to stretch out. 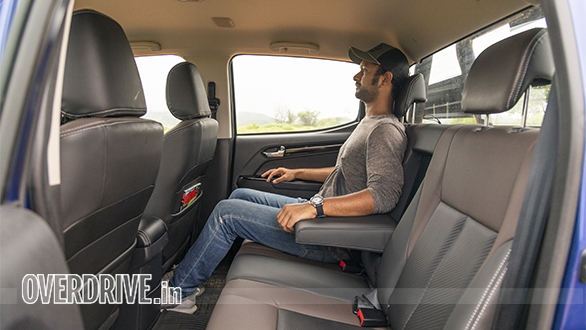 What about that new engine?

Called the RZ4E, the four-cylinder 1.9-litre turbocharged diesel motor also packs in a variable geometry turbo, but makes more power (but less torque) than the 2.5-litre engine (4JK1-TCX) it replaces. It's only BSIV-compliant for now, so expect an update next year. Figures stand at 150PS@3,600rpm and 350Nm@1,800-2,600rpm, compared to the 136PS/370Nm of the 2.5-litre, which will still power the lower variants. The new 1.9 is paired with a 6-speed torque converter automatic, and as before, is predominantly rear-wheel driven with on-the-fly 4WD capabilities (with a transfer case). The new engine is said to be 60 per cent lighter than the 2.5-litre mill, and uses less parts, but don't go thinking that means the V-Cross is far lighter. On the contrary, the overall kerb weight of the V-Cross Z Prestige is up to 1,935kg. 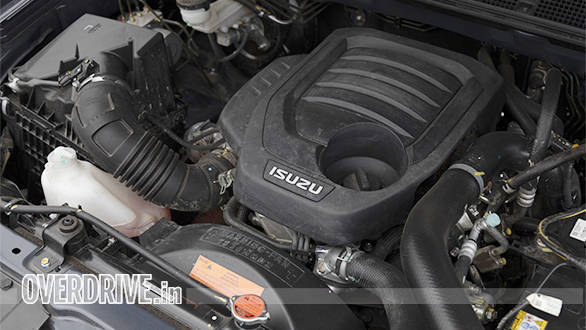 There's not a huge difference between this new engine and the old one  it still cranks with a little bit of a shudder, and can sound gravelly above 2,500rpm. But the figures are close enough to not miss the extra displacement, and like before, it has strong mid-range. The power comes on just under 2,000rpm and runs out nearing the 3,500rpm mark. Isuzu claims shorter gearing has been used to make up for the smaller displacement, and as a result the engine always feels like it has punch. Plus, the automatic gearbox is intuitive enough to keep you in the right gear, whether you're in the city or on the highway. You can tell it's not a cutting-edge transmission though, since it can feel slightly ponderous in its shifts, especially between first and second. The V-Cross 1.9 AT posted a 12.5s time in our 0-100kmph testing, making it over three seconds quicker than before! As such, a mid-12s run is respectable for a 1.9 tonne truck, and on par with full-size SUVs like the Toyota Fortuner. 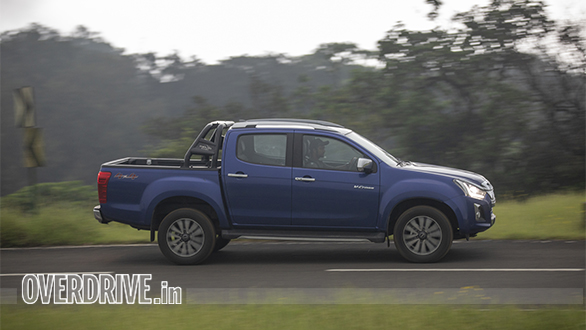 The good news is that the drivetrain is well calibrated to downshift exactly as many gears as you tell it to, depending on how much pressure you put on the throttle. In our kickdown acceleration tests, a 2.7s time between 30-50kmph (downshifting from third to second) shows that the V-Cross is fairly quick when it comes to shooting into gaps. If you wanted to second guess, you can take manual control, where it'll hold onto gears and not upshift. Useful off-road, but not too useful when driving enthusiastically since the engine can take what feels like a good second to respond to throttle inputs. This is largely because of the drivetrain going into coast mode when you get off the throttle, in the interest of fuel efficiency. And it shows, the V-Cross AT delivers a healthy 15kmpl on the highway, and 10.2kmpl in the city, in unavoidable and especially heavy traffic too.

What about the ride and handling?

There's no mistaking the V-Cross is a body-on-frame truck, with its typically bouncy ride quality over undulating surfaces. We drove it solo and with three passengers on board, and lowering tyre pressures at the rear, didn't make enough of a difference to call it a success. Though, we know ride improves drastically with more weight in the deck. As it stands, the V-Cross still feels engineered for the apocalypse  it'll go over pot-holed roads at any speed you like and not throw you around inside. There is vertical and lateral movement (less compared to before on account of the larger 18-inch wheel and tyre package) that you can feel over less than perfect roads, and your passengers at the rear may complain if you don't show restraint. 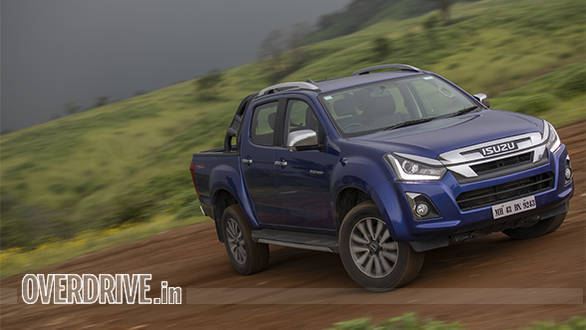 This stands true when it comes to the handling package as well. As expected, the V-Cross displays a fair amount of roll but actually settles back on its springs surprisingly well. If you were to try hustling it, you wouldn't be awfully disappointed, with the light rear end helping the V-Cross gain some rotation around tighter corners. Off the road, the V-Cross clambers over most rocks and other obstacles, only needing to watch out for the sideboards and rear bumper. Though we didn't really push it in terms of terrain, the automatic, with its hill-hold assist is a welcome feature when attempting steep sections, and its 4L mode seems suitably paced for creeping through a low-grip section.

Priced at Rs 19.9 lakh (ex-showroom), the V-Cross automatic does seem like it's a few lakh rupees more expensive than it should be, since the cabin and drivetrain still feel a little old-school. But, the convenience of that automatic transmission can't be ignored, and with it, the V-Cross is better equipped to take on city traffic as well. With the only real complaint of the previous (manual transmission) V-Cross being its slightly heavy clutch, it looks like the automatic will find more takers. Though, if you can wait, there's a brand-new generation V-Cross revealed internationally, with far more modern interiors, which should make it to India in the next few years. 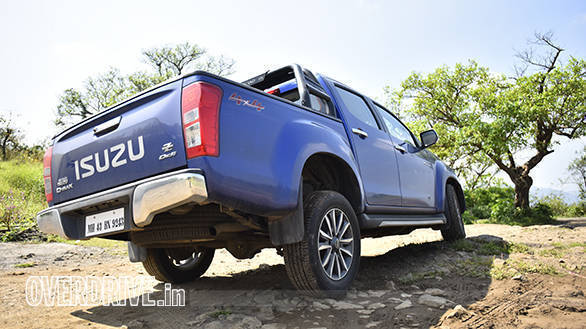