As far as appetisers go, the hurried handful of laps we were able to put in behind the wheel of the new 911, did little to satiate the desire to get in and drive that just standing next to a 911 instills in you. I know, I know, something's better than nothing, and I would jump at the chance to just park one. But the 2019 Porsche 911 begs for a weekend (or month) full of driving. Preferably, exploring its limits, since that's been made even easier now. We know this because our experience in the new 911 came as part of the Porsche World Roadshow, which included the entire Porsche line-up, including the previous 991-series of the 911, which we drove back-to-back with the new one at the Buddh International Circuit. 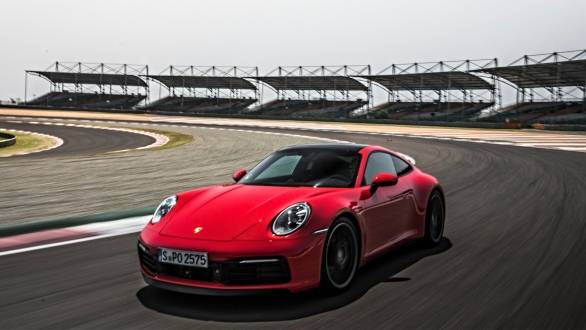 For starters, everything! The new 911 (992 series) might merely look like a really comprehensive facelift of the previous 911 (991.1/991.2 series) but under the skin, which is wholly made of aluminium now, there's an all-new platform. Called the MMB, it debuts on the new 911, and is adapted to also use a hybrid powertrain, so we know there will be a hybrid 911 in the future. The platform itself uses more aluminium, which would lead you to believe that the new 911 is lighter than the outgoing model. But with all the added tech, new particulate filter to help with emissions and new gearbox, it's actually heavier, by about 55kg at 1,515kg. 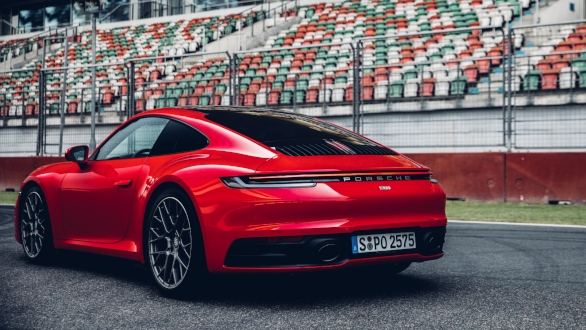 Another reason, which is either good news or bad news depending on how you look at it, is that the new car is wider. In fact, in a first for Porsche, the base rear-wheel drive models are now as wide-hipped as the previous generation wide-body all-wheel drive/Turbo models, and Porsche says that this width will remain standard across the range for the 992. Another first for the 911 is the larger diameter rear wheel, with a 20/21 inch setup. Still, as the 911 moves into the future, it manages to resemble the early models (up to the 964 series at least) with the classic recess in the hood, and the straight lines between the hood, fender and the bumper really exaggerating the long, low nose. At the rear, the LED light strip running across the width of the car is another reminder of the long heritage of the 911, last being seen on the 993-series of 911. In the flesh, the thing that strikes you most is that the 911 is less smiley now, and looks more mature and aggressive for it. 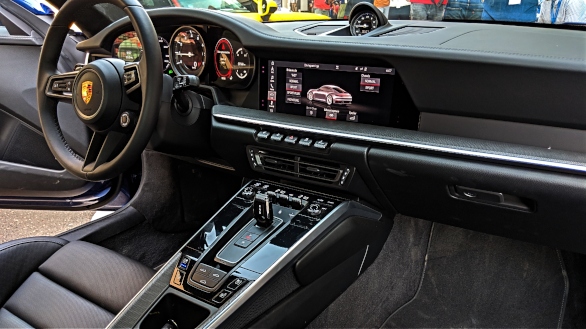 The quality interiors see a full change too, with the new 10.9-inch touchscreen infotainment set low in the dash just under your line of sight, with a greatly minimised set of physical controls/toggle switches to go with it. It really is something how you can set the seat position all the way to the floor, and still have all the superbly tactile and 'click-y' controls fall to hand easily. And you don't move around at all, with the seat holding you in place without you needing to brace yourself against the bulkhead or the door panels. Best part about the cabin of the new 911? The analogue tachometer up front and centre is amazingly detailed, even if it isn't outright sporty. It's flanked by digital dials for the first time in the 911, but is set apart from this similar layout in the other four-door Porsches by that layered rev counter. There's a bunch of driver assists available now as well, including a Wet mode that knows when it's raining and prepares the car accordingly, night vision, automatic cruise control, a suite of connected car apps and more. 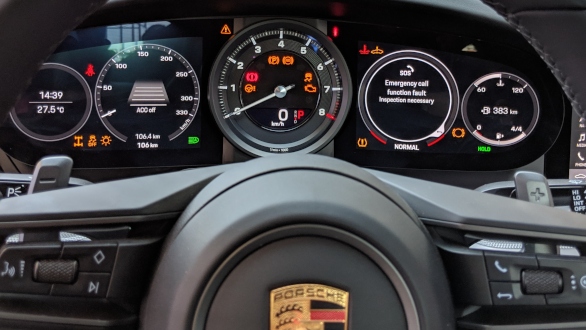 Mechanically, the most important change is that the revised three-litre flat six-cylinder now comes with an eight-speed dual clutch automatic gearbox, instead of a seven-speeder. The engine is carried forward, but a completely new intake, exhaust and bigger turbos, helps take the power output to 450PS, a gain of 30PS over the outgoing car. Torque at 530Nm is up too, but importantly it peaks earlier, and stays flat till the mid-5,000rpm.

Need perspective? The 911 has been around for over 55 years, and is just entering its eighth-generation now, which really does point out how special a new generation of the 911 is in the current typical four to five year life cycle for cars. 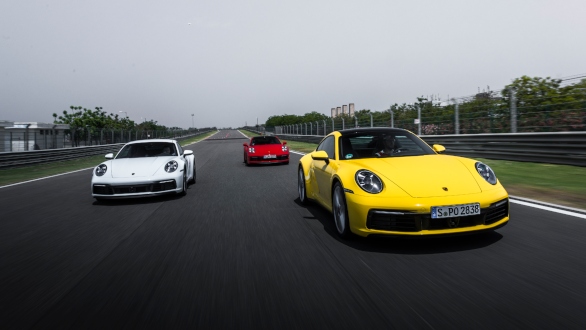 Jumping out of the previous-gen Carrera S and into the new 911, there's a sense of familiarity, of course. You sit low, the steering comes to you, and even if your view of the other dials gets cut by the wheel, you always have full view of the rev counter. Good, so far. It sounds great too, with just a hint of raspiness to its voice. For a turbocharged car, that is. There's always the sense that the engine is being restrained, but all that goes out the window when you mash the pedal down. It'll push you right back into your seat before you can say "laag"! Porsche claims a 0-100 kmph sprint of 3.7s, and we don't doubt it in the least. The Carrera S we were driving had no issues keeping the lead GT3 (with a Porsche instructor behind the wheel) in its sights - even through the fast corners where the higher rev ceiling of the GT3 gives it a natural advantage.

Surprisingly, it's in the slow corners at the BIC where the new 911 shines. The revised electronic power steering makes its difference felt - loading up super intuitively, as you add lock to the wheel to get the front end tucked in, with the car seemingly rotating on a point just before the apex. The magic of the rear-engined, rear-wheel drive 911 is still alive - and it doesn't want to kill you now! 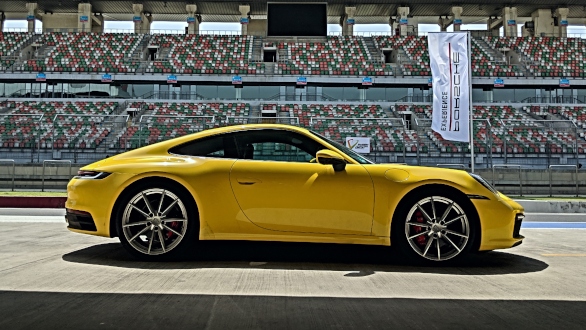 Because more of the weight is on the rear, you can brake very late and very hard, and never really feel the rear go light. Where the old 911 could still feel a little ragged as you got to the limits, needing quick corrections at the wheel, the new one gives gentle reminders that the rear end is about to break loose. It urges you to balance the car on the throttle - more gas, more rotation towards the inside of the corner. Even if you manage to squirt on a little too much gas, and end up facing away from where you want to go, going to opposite lock is so seamless and quick, it makes you feel like your hands suddenly weigh less than they did before. The rear-wheel drive Carrera S feels undoubtedly sharper here at the track, with the all-wheel drive Carrera 4S tending to understeer when we tried carrying the same unbelievable momentum through corners.

We had a series of quick out/in laps, and though the cars were being driven hard, the brakes on every 911 we tried felt consistently strong, giving you the confidence to brake deep into a corner. Granted, the front straight of the BIC wasn't in use, and the back straight had a pop-up chicane to cut speed over the nasty bump there, but even braking from speeds as high as 185kmph every lap did nothing to lessen the feel from the brakes. The only thing I found puzzling was the gearbox's reluctance to downshift on corner entry, even in the hardcore Sport Plus drive mode, until the very end of braking. Instead I let the car decide what was best, and it probably did a better job than I could've. 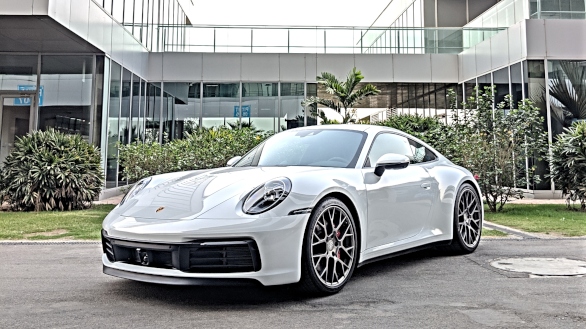 First impressions are good, then?

Very, very good! There weren't many faults with the 911 to begin with, but seeing how much easier it is to balance on the limit has just made us even stronger believers in the magic of the 911. We're positively itching to spend more time in one, in fact! We have a feeling it'll be more comfortable too from the way it handled the bumpiest of kerbs at the BIC, but we'd have to reserve judgement on that till we drive it on the road. At an ex-showroom price of Rs 1.82 crore for the Carrera S, other supercars in India need to be very wary of the new 911.