You've probably heard the word by now  the Volkswagen Group is putting Skoda in the driver's seat for its India operations. And that plan includes developed-for-India models, the first of which will be a mid-size SUV, underpinned by the localised MQB A0 platform. The Karoq is not that model. What it is, is a replacement for the Yeti  and a scaled-down version of the seven-seater Kodiaq in more ways than one. 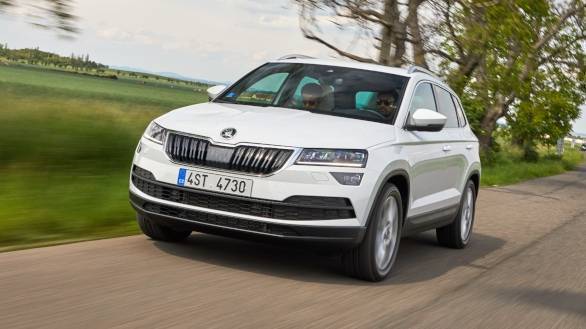 Like we said, the Karoq borrows heavily from the Kodiaq, and the difference in size is only obvious when viewed in profile. Next to each other, the Karoq looks a bit like the Kodiaq's introverted brother  with less flair in its styling going by the flatter looking headlights. It looks pretty substantive on its own though, thanks to its sharp-pressed and squared off wheelarches, and high-set hood. 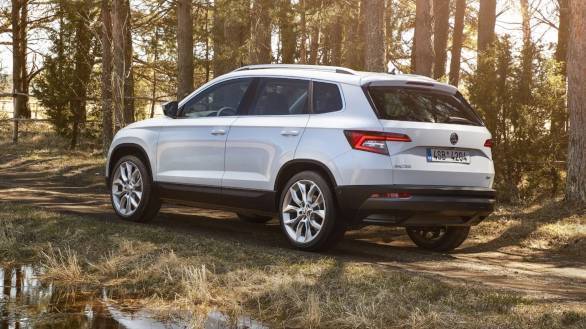 In fact, it looks larger than the VW Tiguan, with which it shares its MQB platform, though the Karoq is a good 104mm shorter in length, 69mm less in height and has a wheelbase that's 47mm less. Around the rear of the Karoq, Skoda's now-signature C-shaped tail lights help it stand out but that's not the angle most people are going to be looking at, right?

What about the cabin?

The downscaled-Kodiaq theme continues in here, and the Karoq feels far more impressive for it. With the exception of a few of the plastics on the lower dash, everything you reach out to is soft touch, and feels of superb quality (pun unintended). The Karoq uses Skoda's upgraded second-gen Modular Infotainment Matrix infotainment, with our test car being equipped with the larger 9.2-inch Columbus touchscreen. 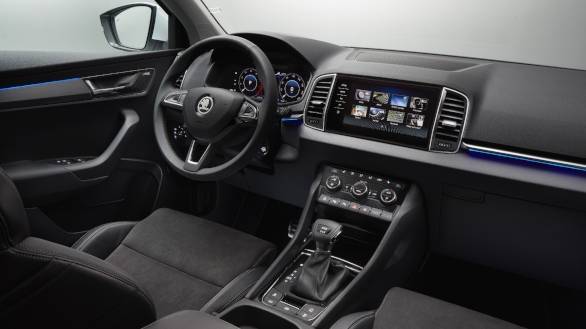 It also gets the new individually programmable digital instrument panel, and its design and layout is one of the best of its kind  both in how it looks and how easy it is to read. The instrumentation gets extra points for having the ability to fine tune whether you want turn-by-turn navigation, speed limit warnings, or other driving information including acceleration forces and such displayed within the speedo/tacho dials. And it worked well to help us keep an eye on the basics without getting distracting, or feeling like information overload, a real annoyance on some of the new crop of digital dashboards. 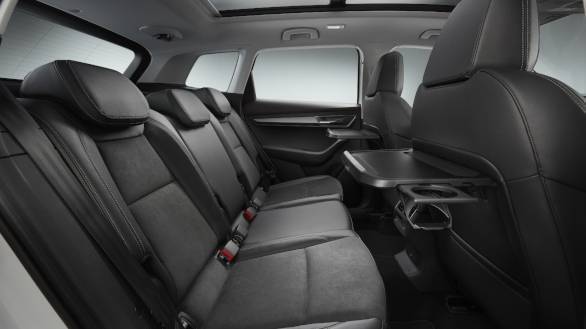 The rear bench is comfortable, with decent under-thigh support, and legroom. If you find yourself a little cramped, well, you can tilt and slide your section of the rear bench! Skoda calls its VarioFlex seating, and at the maximum comfort setting, it really does feel spacious in the rear. Flexibility is the Karoq's strength, with boot space at an imporessive 520-litres, or 1,630-litres when the seats are folded, or up to 1,810-litres with the seats completely removed. Its feature list, at least on the international-spec model is as impressive as the Kodiaq's, with a panoramic sunroof, wireless smartphone charging, Apple CarPlay, and radar-based active safety features included.

Our drive in the Karoq was too brief to leave a lasting impression, but the 1,968cc diesel in its 150PS/340Nm tune is definitely better suited to the smaller Karoq than the Kodiaq. Oh, yeah, so it's just like the Kodiaq under the hood too! But at 1,591kg at the kerb versus the Kodiaq's 1,818kg, the Karoq feels just a smidge less hesitant to get going. Refinement is as impressive as ever, as is the seven-speed DSG. Our test cars rode on 18-inch wheels, just like the VW Tiguan does in India, with well-judged ride quality on the well-paved sections of road around Prague. But downtown Prague is a different story, with its cobblestone roads highlighting that Skoda will have to soften the Karoq's damping to suit our conditions. It comes with Dynamic Chassis Control (in the AWD we were testing), which electrically changes damping in three modes, but even in Comfort it felt firm. The flipside is that the Karoq handles well for an SUV, and though the steering isn't feelsome, it doesn't feel over-assisted and vague. 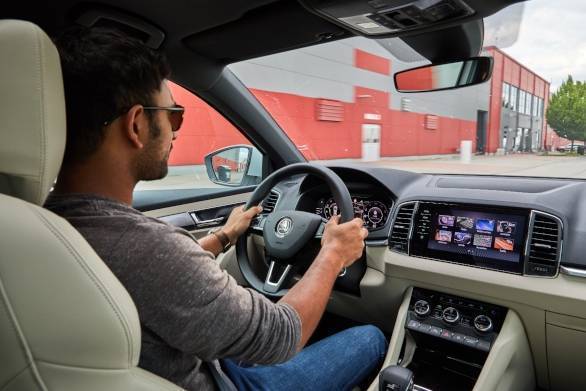 The Karoq seems like it would be great value - who wouldn't want a feature-rich, scaled-down Kodiaq, at more affordable prices? Well, that's the hope, because Skoda has announced the Karoq will be launched in India by mid-2020 - but that it will be a CBU, which means it will be more expensive than initially rumoured. How well the Karoq does will dictate whether it will be assembled here in India later  but that of course depends on the price. For Skoda to avoid this catch-22, they'd need to price a reasonably-specced Karoq diesel automatic at only a slight premium to the likes of the Jeep Compass, or VW Tiguan (translated to Rs 30 lakh on road). If that happens, Skoda should have something of a winner on its hands, till the localised-version of the smaller Kamiq arrives.