Nine minutes, twenty nine seconds and eight tenths. That's the time it took professional race driver Sabine Schmitz to lap the 21km long Nordschleife in the Skoda Kodiaq RS, making it the fastest seven-seater at the Nurburgring. Though, the latter headline figure probably took a while more (and some creativity) to think up  since there are SUVs which have dipped under the eight minute mark, but with far more (petrol) power and two less seats. Instead, the Kodiaq RS makes do with a twin-turbo version of the familiar 2-litre diesel engine, all-wheel drive and some more creativity in the form of a simulated exhaust note. All which makes it more relevant than a mere 'Ring time and plenty entertaining, especially in a downpour and around the narrow, twisty country roads of Prague. 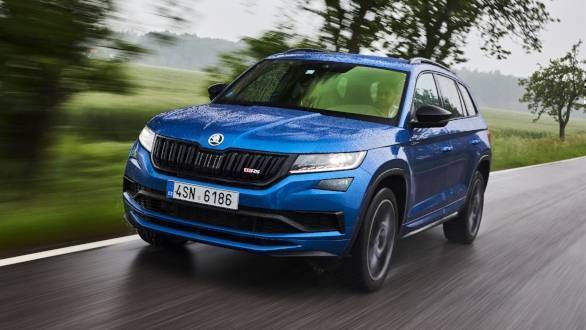 Looks different to a regular Kodiaq?

Not very much if viewed head on, except for some glass black additions that mimic the look of splitters, and twin tailpipe exits. It'd be hard to miss the brilliant 20-inch wheels though, which more than pull their weight in transforming the elegant Kodiaq to part-super SUV. The Kodiaq RS, being the first-ever production Skoda to go that large in wheel size, also borrows the colours from the Octavia RS, including our favourites Steel Grey (or as the Germans say, Nardo Grey) and Race Blue. 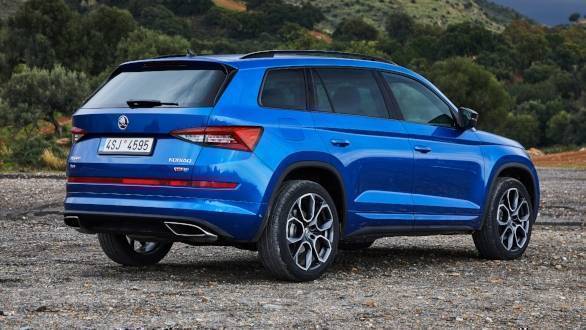 Is the cabin special too?

The Kodiaq gets the full RS treatment inside, with sufficient carbon-fibre weave, Alcantara inserts and contrast stitching around the cabin to prove it. The other upgrade, versus the regular Kodiaq we're used to in India, is the 9.2-inch touchscreen with a slicker interface and operation than before. Not to mention the new virtual cockpit digital instrumentation that you can tweak to be as pared back, or as detailed as you like. The best part of the RS, though, has to be the sound that the engine makes  yup, the sound. From a diesel. And that's also the most troubling part of the RS... 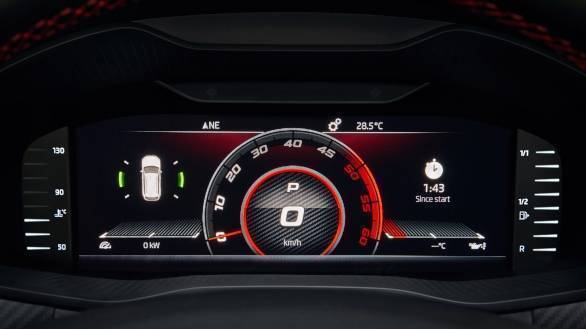 Diesel power or is it?

Under the hood of the Kodiaq RS isn't the 230PS 2-litre petrol, as on the Octavia RS sold in India. It's the same basic EA288 2-litre diesel mill as on the Kodiaq, but with tweaked internals and twin-turbochargers that help take outputs to 240PS and 500Nm torque. It also comes with what Skoda calls the Dynamic Boost System, which sounds like something you'd expect to find on expensive audio equipment. Unfortunately, that's exactly what it is. The system doesn't just pipe an exhaust note into the cabin through speakers, it outright manufactures it, and plays it via the tailpipes! While you're aware that you're driving a refined diesel SUV in Eco mode, switching to any other mode gives the impression that you're behind the wheel of a V8! So when you're idling, or even just cruising along, there's the distinct uneven warble of a V8 following you. It's quite disconcerting, but at the same time, sounds really good! I'm not vehemently against it, at least not yet, I can't be so sure that I'll feel the same if there ever comes a time when a regular hatchback can be made to sound as evocative as a Ferrari. 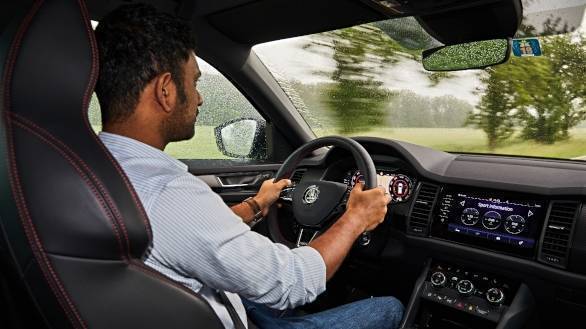 The Kodiaq RS' engine is mated to the higher-rated seven-speed DSG gearbox (DQ500), with all-wheel drive, and is said to be able to clock under 7 seconds in the 0-100kmph run. What is more interesting is how cleanly the Kodiaq RS was able to shoot out of tight corners even with buckets of rain coming down. We tried being as inconsiderate with the steering and throttle as we could, and still couldn't manage to upset the big seven-seater. That's also down to how well Skoda's electronics work to minimise body roll through the adaptive dampers, though the trade-off appears to be ride quality that's quite firm. The good news is just how confidence-inspiring the whole package is, continuously egging you on to drive a little harder  something that most SUVs don't communicate to you, especially on a short drive, in the WET! 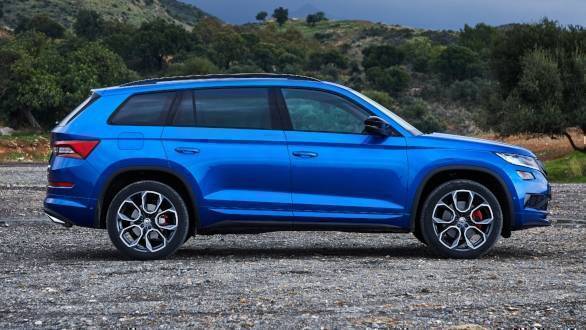 Well, we're not taking the Kodiaq RS' 'Ring record lightly, or its RS badge. It really does seem competent at going quick in adverse conditions, with the ability to seat seven being its main draw. It will likely be well over the Rs 50 lakh (on the road) mark if Skoda ever decides to bring it to India  but as far as a halo model goes, it makes a lot of sense, given how the most popular go-fast models from the Germans are all SUVs. Sounds like sound reasoning, no?