The Gixxer was the perfect shot in the arm for Suzuki when it came out in 2014. In fact, not only did it do well for the Japanese manufacturer, the bike also went on to become one of the bestselling 150cc motorcycles in the country. Of course, with a name like that - 'Gixxer' is what Suzuki's sportsbike family is called affectionately by enthusiasts the world over  the bike had a certain ring to it besides being a well-packaged machine. A bunch of revised paint schemes over the years has ensured the Gixxer kept cash registers ringing for Suzuki, but let's admit it, the bike had started feeling dated thanks to competitors upping their game. And Suzuki has just done that too  with the new, 2019 Gixxer. We put the bike through our road test scalpel to see if the new bike can continue the 'Gixxer' legacy. 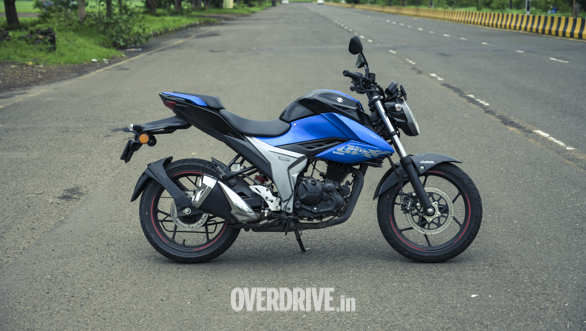 Style and Build
Suzuki has tweaked the overall design by revising body panels and the styling of the rear end, but the bike's overall silhouette is the same. Clearly, the manufacturer didn't want to mess with a formula that has worked well for it so far. The revised tank extensions look sharper and lend the sides a fresh appearance, as does the dual-tone paint job you see here. Suzuki has also traded the older bike's one-piece seat for a sportier-looking split unit, while the tailpiece and stop light are identical to the updated, 2019 Gixxer SF. The 'double barrel' exhaust remains largely the same, though the chrome looks different now. 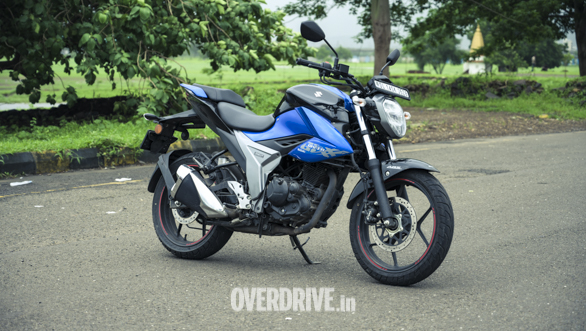 The new Gixxer gets a wheel hugger which is usually looked down upon, however, if it were my personal motorcycle I would be more than happy to keep it given the impressive build quality and well-integrated design. Suzuki has also traded in the older all-digital instrument cluster for the new unit seen on the 2019 Gixxer SF  it is a monochrome unit again, but with inverted colours and offers the same amount of information as before. 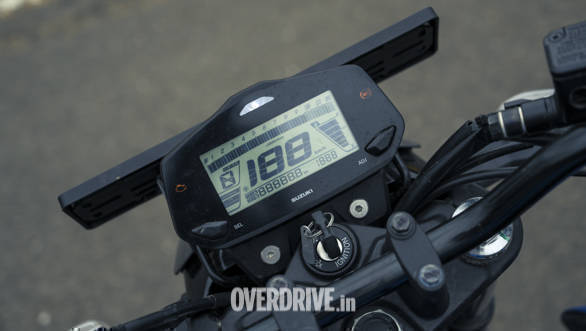 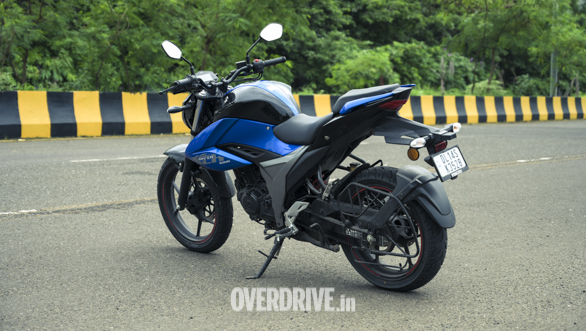 Ergonomics
The Gixxer's riding position has always been comfortable, with a dash of commitment as you crouch forward slightly. Effectively, the rider's torso is leaned over a little and the knees form a relaxed angle - courtesy the lower set footpegs. The fuel tank is easy to grab thanks to its well-designed knee recesses, also, it meets the seat at an angle that allows some room to move around. 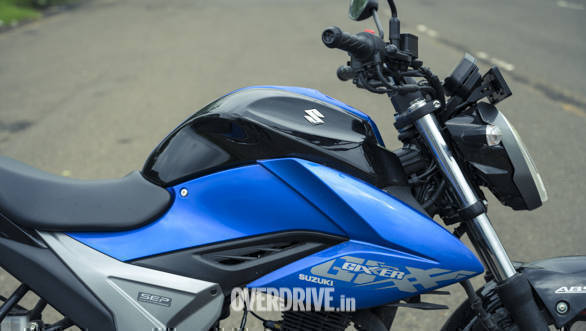 Speaking of ergonomics, the mirror stalks could have been longer, apart from which the shape of the mirrors also does not let you take a good look at what's behind you. The split seat barely accommodates the pillion though and could have been wider. 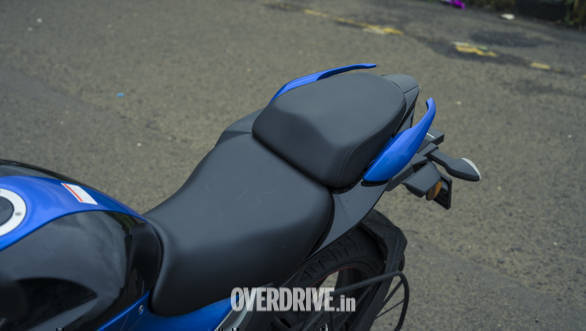 Engine and performance
Suzuki has tweaked the engine to make it BSVI ready, though the engine isn't compliant yet. Expectedly, the engine is in the exact same state of tune as the updated Gixxer SF, which means the power output is down marginally. Peak power and torque outputs thus stand at 14.1PS, 0.5PS lesser than before and 14Nm, which is the same as before. Fuel injection though is standard now, as Suzuki has done away with the carburetted version. 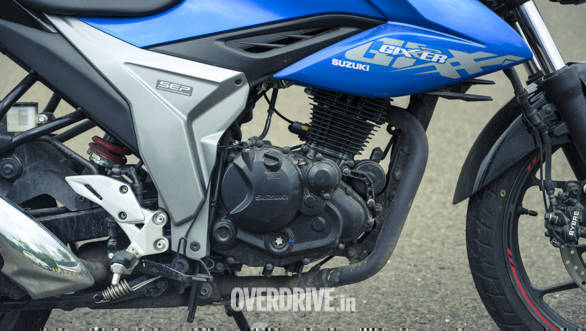 The change in the engine's state of tune is noticeable if you've ridden the older Gixxer, else it is a fun-happy-little number that enjoys being revved. That said, stop and go traffic makes you realise how lean the air-fuel ratio is in the interest of efficiency and there were times when I felt the need to build revs before releasing the clutch in traffic. The engine has been tuned to offer good grunt at city speeds though and that's where you enjoy the Gixxer better than on open roads. 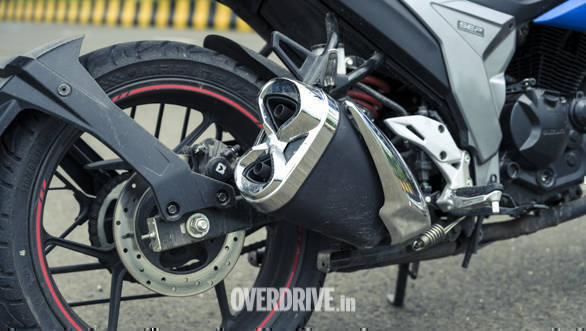 The 2019 Suzuki Gixxer managed the 0-60kmph dash in 5.72 seconds, still a good number for a 14PS, 140kg motorcycle. As mentioned earlier, the bike has been tuned for impressive low-speed performance, which comes at the expense of a good top-end grunt. Performance thus tapers off as you cross the 90kmph mark and in fact, the bike takes a yawning 21.6 seconds to hit 100kmph. In-gear performance is impressive, though fuelling could have been slightly crisper. The Gixxer also impresses on the fuel efficiency front and returned 48.43kmpl in our city test and 54.63kmpl on the highway. 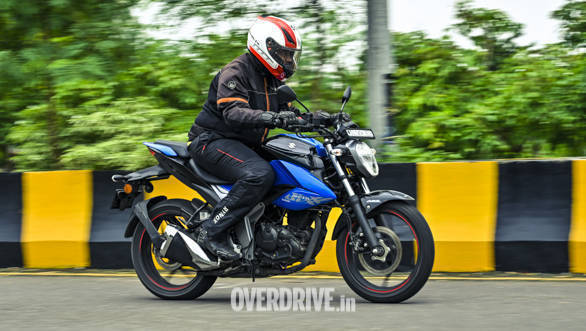 Ride and Handling
We have always liked the Gixxer for its dynamics and that's something that hasn't changed, despite the 2019 Gixxer using a revised chassis which has made the bike 4kg heavier. The bike's overall dimensions have changed marginally as well, though you can barely tell the difference on the go. 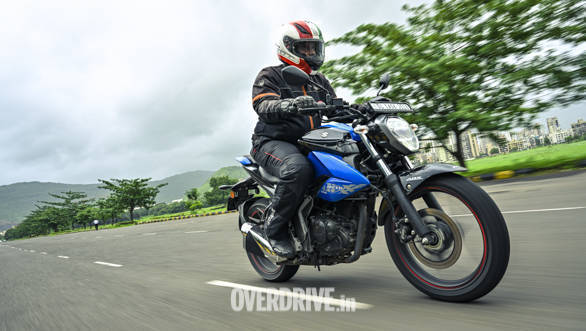 The bike feels nimble and is quick to change direction, just like before, thanks to the well-tuned suspension setup that offers a good mix of ride and handling. The suspension soaked up most potholes on Mumbai's rain-battered roads well, though the bigger ones did transmit some of the shocks to my body. The Gixxer is now shod with newer MRF tyres called the Zapper FX which require a bit of warming up before offering their full grip, which is a bit of a letdown on the handling front. 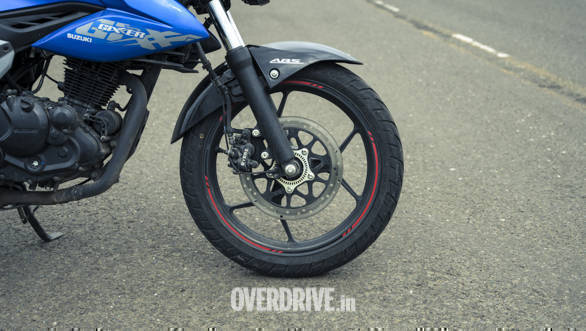 Brake feel is better than before, as the new Gixxer offers a more progressive feel than before, along with good retardation. Suzuki has equipped the bike with single-channel ABS only in the interest of keeping costs in check and the system works well, without too much intrusion. The bike managed to come to a full stop from 80kmph in 3.21 seconds, covering 31.28 metres in the process. On the whole, the new Gixxer impresses as the original did with its dynamics and there isn't really much to complain about on this front as it feels confident and fun to ride while also offering likeable ride quality.

Verdict
Priced at ? 1 lakh ex-showroom the 2019 Suzuki Gixxer commands a premium of more than ? 10,000 over the outgoing version. That might sound like a lot but the bike gets ABS, a revised chassis and LED lights apart from a refined engine that's efficient without compromising the fun quotient, which is what the Gixxer is meant to offer. While not a big change over last year's bike overall, the 2019 Gixxer has the same feel as its predecessor and is an involving motorcycle, be it as a commuter or a sporty everyday machine, while feeling absolutely reliable.