When the new generation Bonnevilles broke cover about four years ago, I wasn't a huge fan of retro-classics. But the very first bike I rode from the family was the Street Twin, which changed my perspective as it was quick and handled well, as opposed to what I thought of retro-styled motorcycles. Over the years Triumph has expanded the family to include machines that look retro but are properly modern under the skin. None of them has tugged at my heartstrings as much as the Speed Twin has though. Why, you ask? For starters, it is powered by the same engine as the Thruxton R  the most powerful Bonneville currently  in the exact same state of tune! Of course, that's just one of the many things that make the Speed Twin so exciting. The styling, for instance 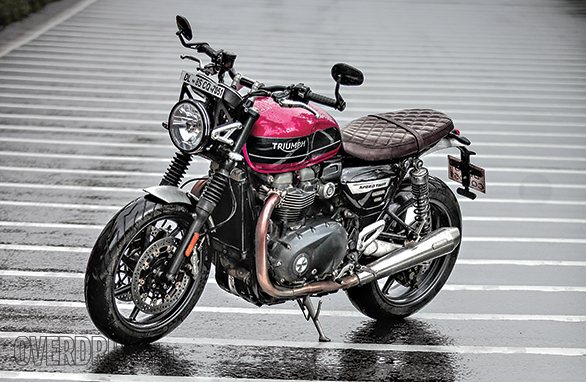 The Triumph is one of the best looking Bonnevilles in the current generation family of this iconic retro-classic British motorcycle and it is not only well-proportioned, the bike is also surprisingly compact for a 1,200cc motorcycle

At first glance the Speed Twin looks similar to the Street Twin. Of course, the intent is similar, as the Street and Speed are both pegged as a younger and sportier members of the Bonneville family. The Speed gets its own design elements though, like the distinctive looking strip of LEDs lining the lower half of the headlamp. Then there's the black strip that runs across the fuel tank horizontally, as also the uber-slim seat. The seat on our test bike was an optional one from the accessories bin with a quilted finish, but the stock seat is as slim. 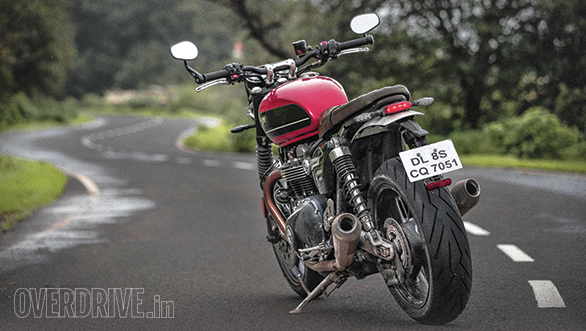 The instrument cluster deserves a mention too  it looks like the ones on other 1200cc Bonnies, but it's the detailing that sets it apart, especially the racy background and the way the telltale lights circle the needles in both pods. Attention to detail is immaculate, be it the faux carburettors or the Triumph name and logo etched into parts like the headlight bulb and turn indicators. The Speed Twin looks even more arresting from the rear thanks to the slim seat, the short, tall rear mudguard and the slim stop light that sits sandwiched between the seat and mudguard. 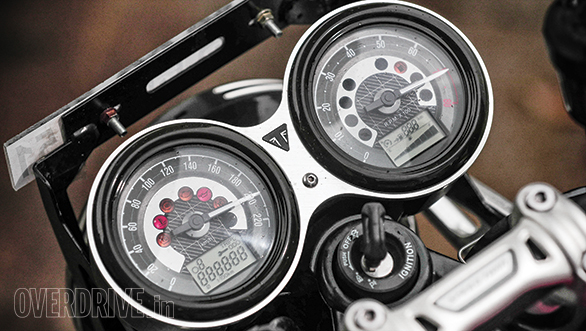 This is easily one of most beautiful derrieres on a Bonneville in my books, but also a great example of form preceding function. Riding the Speed Twin in rain was fun but when I stopped just a few kilometres later I realised my back was covered in muck! The short tail piece sprayed some serious amounts of muck onto the seat and my back, leaving me drenched and messy. On another note, the Speed Twin is compact enough to belie being a 1,200cc bike thanks to its compact dimensions. What's more, build quality is top notch just like any other new age Triumph and overall, the Speed Twin is a motorcycle I'd like to see in my garage every morning.

A big reason behind the bike's exciting character is its engine. The 1,200cc liquid-cooled parallel-twin motor delivers 97PS and 112Nm and as I mentioned above outputs are identical to the Thruxton R, but the engine is 2.5kg lighter here thanks to revised internals. And in case you haven't realised, the peak torque output of 112Nm is in the same league as several litre-class superbikes! More importantly, the torque curve is linear and 112Nm is spread almost evenly throughout the rev range. As a result, bike clocked a 0-100kmph time of just 4.21 seconds in our acceleration test which is really quick, even by sportsbike standards. 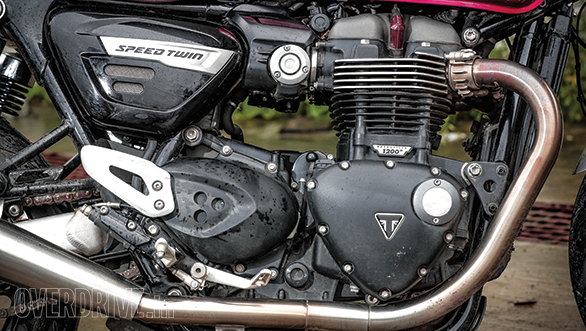 Not only does the 1,200cc parallel-twin motor powering the Triumph Speed Twin look good, it also sounds good and packs in a hefty punch with its linear power delivery and 112Nm torque output, which is in the same league as litre-class superbikes!

The Speed Twin can thus surprise you with its acceleration but the seamless power delivery ensures it isn't scary. There's a temptation to accelerate hard at every opportunity and every time I cracked the throttle open, the Speed Twin had me break into a smile inside my helmet. Building speeds is thus second nature for the bike and it almost feels like a modern-day sport naked. In fact, there were times when I thought I was doing 120kmph, only to look at the speedometer and realise I was at 140kmph, thanks to the butter-smooth engine and how unstressed it feels, even close to the 150kmph mark. The engine also emanates the classic British twin-cylinder engine sound, which was even better on our test bike courtesy the aftermarket Vance and Hines pipes. The six-speed gearbox works precisely, though I would have liked it to call for lesser effort.

The Speed Twin gets the same electronics suite as most of its siblings including traction control that you can switch off, along with three riding modes including Rain, Road and Sport. As long as traction control is on the Speed Twin feels very confident in Sport mode even in pouring rain, that's how well-metered the system is. Once the roads dried up I was able to switch TC off and realised the Speed Twin can be quite a hooligan too. The strong bottom end grunt allows you to pull wheelies at will and also carry them for as long as you like!

The Speed Twin runs a set of cartridge type forks and hydraulic shock absorbers and the fine balance the suspension offers between ride and handling is very likeable. The fact that Triumph has not equipped the Speed with the Thruxton's sportier upside down forks makes it more rideable over broken roads without having to worry too much about damaging the suspension. What's more, the forks soaks up potholes and ruts well which is a big positive for our riding conditions. This also translates to better comfort over long rides, coupled with the comfortable seating. 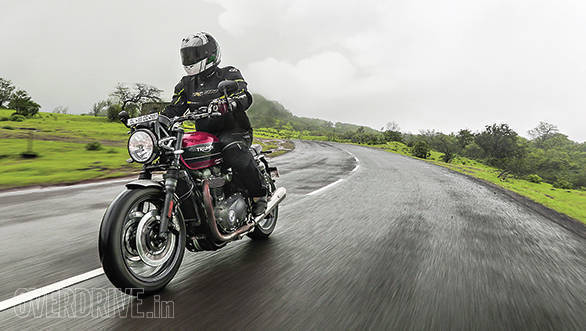 The Triumph Speed Twin's short handlebar has you lean forward ever so slightly to reach for it, but the overall riding position is comfortable and works well - be it in city or on longer rides on highways

Contrary to what its slim profile might suggest the Speed Twin's seat is comfortable even for long durations in the saddle, while the handlebar-seat-footpeg combination makes for a comfortable posture. The handling is as impressive if not better. The suspension and chassis offer lots of confidence when pushing hard, which coupled with the engine performance makes you want to go faster around corners. The star of the show though are the Pirelli Diablo Rosso III tyres as they offer excellent grip in all possible conditions. They allowed me to brake very late and very hard into corners, even in the wet, before chucking the bike right in. And come to think of it, that's one less thing to worry about when riding fast! Handling is another area where the Speed Twin feels like a sport naked and Triumph has nailed the dynamics in terms of the bike's suspension setup, steering geometry and tyres. 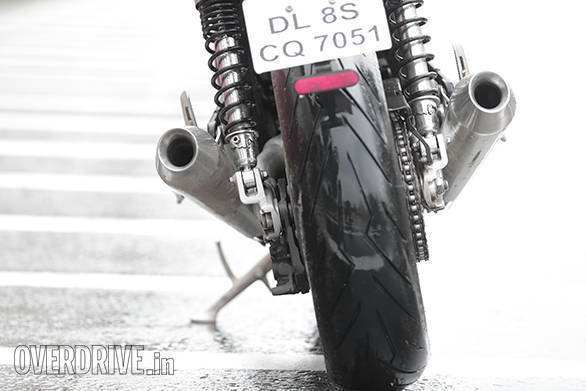 The Pirelli Diablo Rosso III tyres are the star of the Triumph Speed Twin's show as far as handling goes, thanks to the phenomenal grip they offer, whether the roads are wet or dry

The Speed Twin also allows quick directional changes, making cutting through traffic a breeze, though engine heat might just be a bit of a concern in the summers. That said, I have no doubts in stating that the Speed Twin is the best handling Bonneville on tarmac after the Thruxton R. It offers a very impressive ride quality while also feeling sporty and that's what makes it dynamically well-balanced. 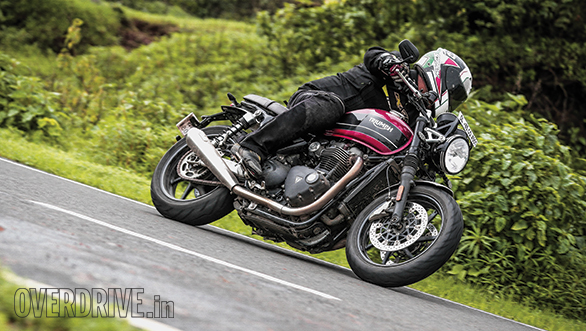 The Triumph Speed Twin is an able handler and eggs you to go faster around corners thanks to the confident feel from its well-tuned suspension setup and of course the sticky Pirellis. Couple that to its impressive engine performance and you know the bike will make you smile with its abilities, even on a casual trackday

Be it for commuting daily or a weekend ride in the hills, the Speed Twin impresses a lot. The engine performance, comfortable seating, suspension setup and sticky tyres all make it an excellent package. In fact, you could even take the bike to a racetrack for a casual track day and come back impressed. Retailing at Rs 12 lakh on-road in Mumbai, the Speed Twin is one of the best Bonnevilles you can buy today. If I were in the market for a retro-classic, I'd probably pick it up myself. It isn't just cool to look at, but also has the go to match its show!