A few years ago, there was a clear distinction between commuter and performance motorcycles. While the latter got all the gizmos, features and performance to cater to the enthusiastic clientele, the commuter segment was seen as a purely functional means of two-wheeled transportation. Some of them did not look or feel exciting and the riding experience was just about providing the necessary momentum to do point A to point B travel. 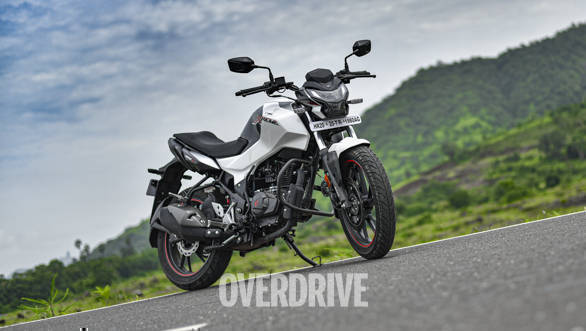 However, things have changed now. Like the fact that you don't have to wait for films to hit theatres as they are available on your smartphone, you no longer have to shell out a premium for features and performance, as that too has become more accessible, without making you compromise on efficiency and practicality. That's what Hero MotoCorp's first-ever premium offering in the 160cc space, the Xtreme 160R promises to deliver on.

A quick flashback at the EICMA 2019 show, where Hero showed the 1.R Concept. It was radical as we had not seen a Hero bike that was this exciting to look at. Unlike some concepts that look promising on the show floor and lose all of that awesomeness when it comes to the production model, the Xtreme 160R retains most of the cues and impressively so. And this has made it the smartest looking Hero that we have seen in these years. 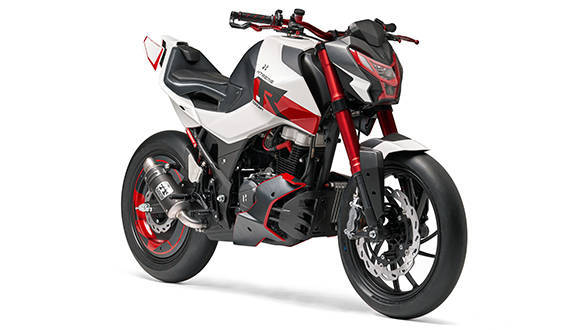 The Hero 1.R Concept was showcased at 2019 EICMA show. The Xtreme 160R takes its design inspiration from this concept.

Instead of going overly muscular with the design that could've made it polarizing, the Xtreme 160R features sculpted contours that can be seen on the front fender, large fuel tank and also on the tail section. Similar to the concept, the Xtreme 160R comes with LED lighting above which is the digital instrument cluster. However, what has not made its way into the production-spec bike are the USD forks, which in the Xtreme's case is the telescopic unit, for obvious reasons. 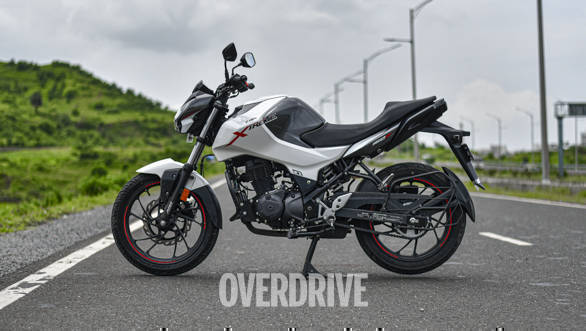 The Hero MotoCorp. Xtreme 160R sports a balanced design throughout

It does not matter which profile you focus on as the Xtreme 160R sports a balanced design throughout. To my liking is the large tank extension flowing neatly into the central panel, giving a flow to the whole design. However, this can be an issue in case of a fall wherein you will be compelled to change the whole unit, making it an expensive affair. The other highlights of this street naked are the single-seat design, stubby exhaust, the solid tail section that comes with an integrated grab section for the pillion and also the compact smoked finished H-shaped LED tail light. The overall appeal of the Xtreme 160R, in terms of styling, feels better than even its namesake larger sibling the Xtreme 200. 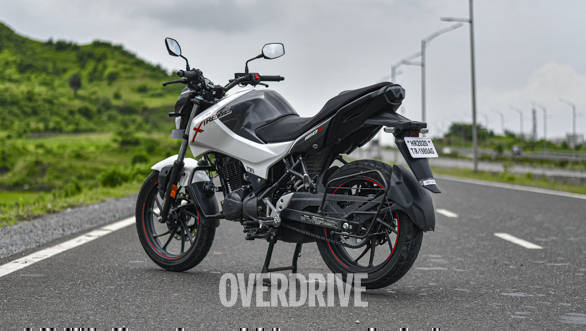 The highlights of this street naked are the single-seat design, stubby exhaust, the solid tail section that comes with an integrated grab section for the pillion and also the compact smoked finished H-shaped LED tail light. 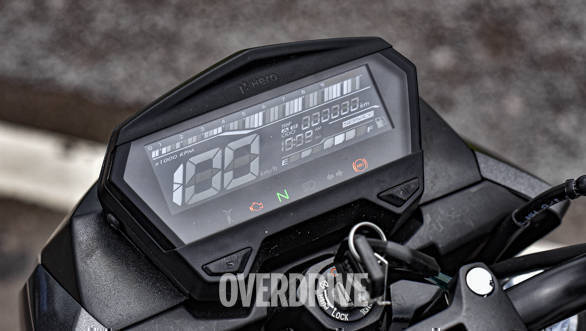 The positive feel is not just felt in the design department alone as the motorcycle boasts of premium build quality in terms of switchgear and panels placement. The equipment list consists of a single switch for ignition on/off and cranking the engine, hazard indicator switch, LED-indicators and inverted LCD instrument console that does look more premium than some of its rivals in its segment. Further, the Xtreme 160R also comes with a segment-first feature that avoids engine ignition when the motorcycle is parked on the side stand. 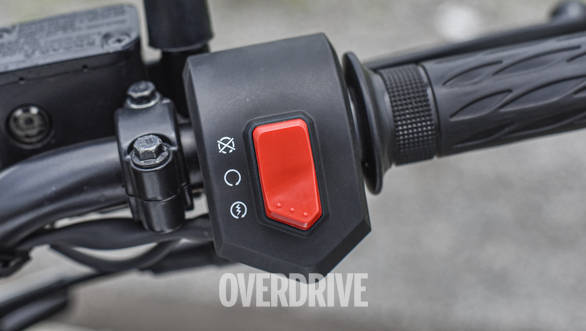 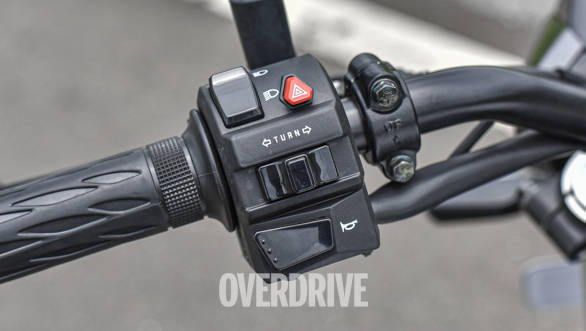 The pictures that you are looking at are that of an all-new single-cylinder 163cc, air-cooled, fuel-injected, two-valve engine that has been developed in-house by Hero MotorCorp. This engine makes 15PS of power at 8,500rpm and produces 14Nm at 6,500rpm. Unlike some of its rivals that boast of a 4-valve engine, Hero has chosen a two-valve setup, which offers a simpler construction making it a more affordable option. However, we believe there was more to just keeping the costs in check when it came to selecting a 2-valve design. 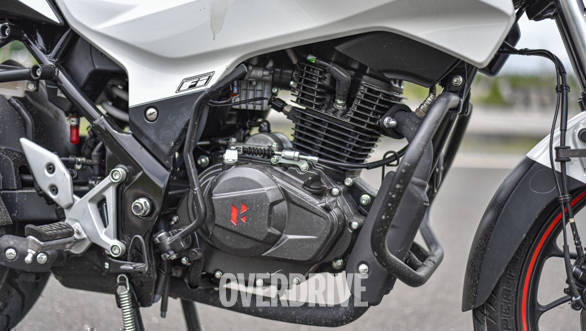 Crank up the motor and you realise that it is an impressively silent unit that offers a linear performance. Commuting in the city was a breeze as the motor makes enough juice from 3,800rpm onward, making sure bumper-to-bumper traffic is not much of a bother. Wring the throttle further, at around the 5,000rpm mark, and you are effortlessly riding at speeds of 80-85kmph. Have to say that the engine feels nice and confident at these speeds without any vibrations. However, it is only when you try to achieve higher speeds of 100kmph and beyond, at around 7,000-7,500rpm, the strain in the engine gets highlighted with a mild buzz seeping into the footpegs and the handlebar. During our tests, the Xtreme 160R took 5.71s to reach 60kmph and 24.3s to touch 100kmph from standstill. 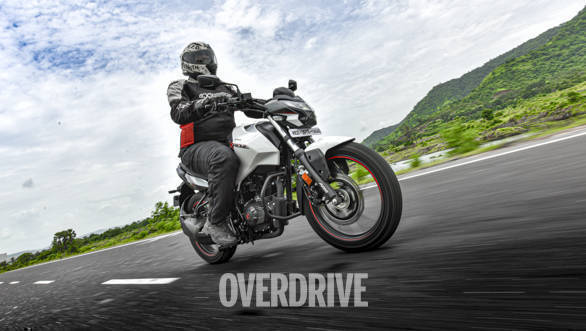 Commuting in the city was a breeze as the motor makes enough juice from 3,800rpm onward, making sure bumper-to-bumper traffic is not much of a bother.

The engine is mated to a 5-speed gearbox which offers seamless shifts, even when you shift in quick succession to whip out more from the motor, during overtaking or while riding on a hilly road. What we are sure you will enjoy is how refined the motor feels at speeds of 80-85kmph in fifth gear without any hesitation and also how precise the throttle response is even at lower speeds. While the top-end performance is not the high point for the Xtreme 160R, it scores impressively in fuel efficiency figures which during our test was 53.87kmpl on the highway and 48.93kmph in the city, resulting in an overall riding range of 550-600km in one full tank.

The riding ergonomics of the Xtreme 160R is comfortable for both shorter as well as taller riders with a well-positioned handlebar, sufficient space to grab the fuel tank and a seat height of 790mm. The riding stance is not too committed while the front footpegs are positioned a tad towards the rear, resulting in a comfortable riding position. Even after spending a good time in the city and on the highways, I did not experience any fatigue which is also because of the well-cushioned seat that offers generous space for the rider and is reasonably comfortable for the pillion as well. 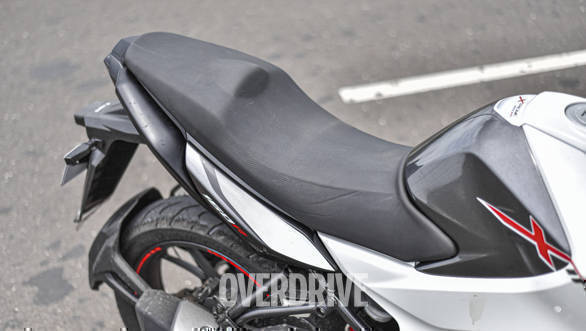 Underneath that sculpted design is an all-new lightweight tubular diamond frame, which has many advantages to its side. Firstly, it has helped Hero achieve the lowest kerb weight in its class of 139.5kg, which is close to 10-12kg lighter than the segment leaders. The benefits of which are felt when you are riding through city traffic with its nimble handling and lighter steering. 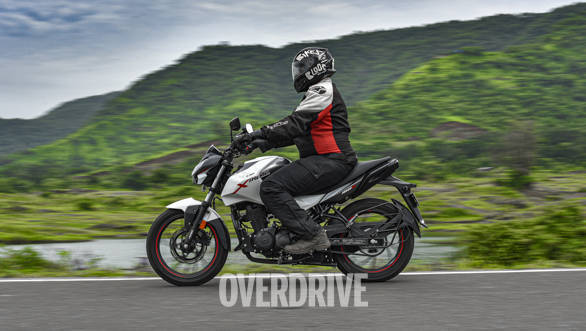 Additionally, it also offers the same level of confidence when you are cornering at higher speeds. This is also because of the sticky Revz tyres and the effective suspension setup. We believe, the Xtreme 160R is the best handling motorcycle that we have seen from Hero so far. Its capability to soak up the undulations on uneven surfaces and also the disturbances while being ridden over potholes and broken roads are truly impressive.

Hero offers Xtreme 160R in two variants, single-disc and dual-disc, both with single-channel ABS. Our test motorcycle was the latter. The braking performance is progressive and it does not require much effort to bring the motorcycle to a standstill. In our tests, the Xtreme 160R took 3.86s with a distance of 36.34m to come to a complete halt from 80kmph and 2.96s and 22.91m to do the same from 60kmph. 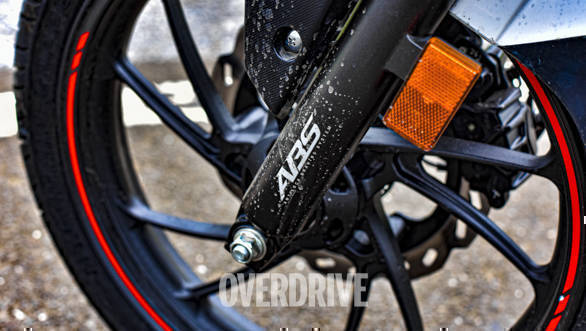 With an on-road price starting from Rs 1.20 lakh, Mumbai, the Hero Xtreme 160R is the most affordable motorcycle in its class, undercutting some of its strongest rivals in the country. Think of it as a motorcycle that will do your mundane chores, religiously follow your home-work routine, not let you visit fuel pumps often, offer a peaceful ownership experience with a 5-years or 70,000km warranty and will also make sure you look cool while doing all of that. While it does not offer an enthusiastic performance, you simply can't ignore what the Xtreme 160R offers in terms of impressive ride quality, engine refinement, premium build and a streetfighter design at that price. 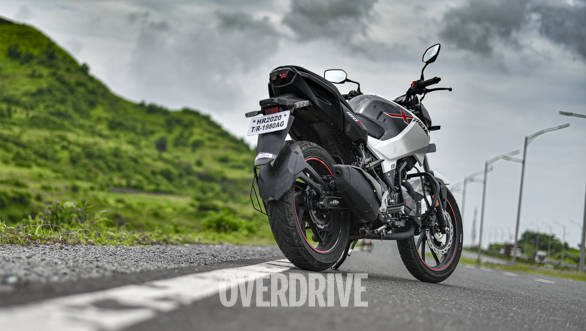