Let's put a potentially large worry to rest right away, the Aura compact sedan will not be your next Uber or Ola ride. Hyundai is taking care of that market with the Xcent, which will continue to be sold alongside the Aura, but only for fleet operators. 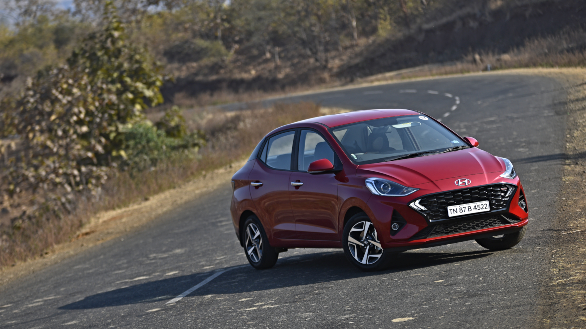 Sort of like what Hyundai's doing with the Grand i10, which is positioned lower than its replacement, the Grand i10 Nios. A hatchback which is (almost exactly) what the Aura is, if you take its sizable 402-litre boot away. Well that, and the 1-litre turbocharged petrol engine that's now being offered in the Aura. It's the same cracker of a motor that's in the Venue but with tweaked power figures, and apart from the Tigor JTP, is the only turbo petrol in a compact sedan. Also available are 1.2-litre petrol and diesel engines, both being BSVI compliant and available with AMTs as well. And with Maruti Suzuki, Toyota and Tata shying away from small capacity diesels for now, Hyundai definitely has a market open. Let's dive into what else sets the Aura apart.

Though it shares much with the Grand i10 Nios, the Aura has a different two-part grille that extends into the lower bumper, apart from a different bumper itself, with slightly larger apertures for the fog lamp cutouts and twin boomerang LED DRLs that look like fangs. Menacing for sure, especially with the creased hood thrown in. Metal work is shared all the way to the rear door, where like in the Nios, there's a blacked out C-pillar in gloss black shrouding. Unfortunately, the kink in the shoulder line here, that works so well in the Nios, looks out of place on the Aura, which sees that line then end a little abruptly in a relatively high boot deck. 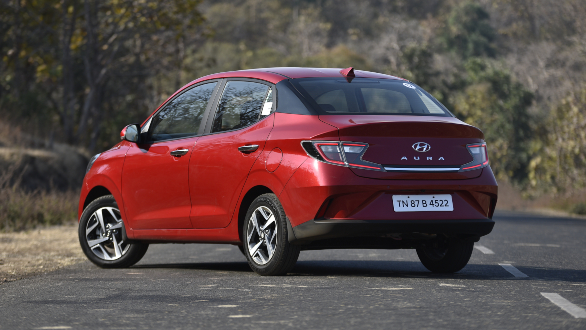 The deck lid itself has a little bit of an upturned edge, like the Xcent before it, but the tail lights could be seen as a little too fussy and large. In isolation, design features like the deep reflector cutouts in the rear bumper, gloss black trim across the bootlid, and JDM-style tail lights are quite bold, but put together, the Aura doesn't feel like a cohesive design. While other colours get a satin silver grille outline, the red, silver and white come with a 'Turbo Pack' that nets you a gloss-black grille, which is far sportier looking. With the only cue to the Turbo being the solitary badge on the front, we wonder why Hyundai didn't take the chance to give the 1-litre turbo added cred in the form of a full chrome-delete, sportier looking wheels and wider/better rubber. As such, the Aura comes with 175/60 R15 MRF ZVTV EcoTred rubber, on unique looking polished alloy wheels. 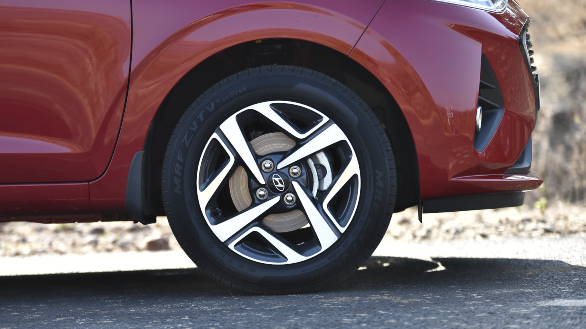 It's nothing you haven't seen on the Nios before, which means the same thoughtfully laid out and neat cabin, but in new colour combinations. Non-turbo variants get grey and beige interiors, while the 1-litre gets a sporty grey, black and red theme. And while quality of plastics in key touch areas is above average for the class, the all-plastic door pads don't feel the greatest, especially at the rear. We're used to seeing it on the Xcent, it was acceptable on the Nios but really, some fabric could've made a world of difference. A strange omission, really, seeing how high quality the fabric upholstery feels in the Aura. 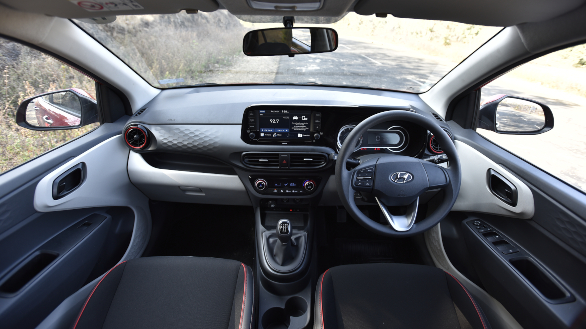 As is the case with new Hyundais, the Aura scores high on the equipment front, with a large and easy-to-use 8-inch touchscreen with smartphone integration, and bundled with Arkamys audio, which can be set to display the reversing camera imagery even on the go. Also on the list are wireless charging, rear AC vents, two airbags, ABS with EBD, ISOFIX points and more. Curiously, automatic wipers and headlights are missing. 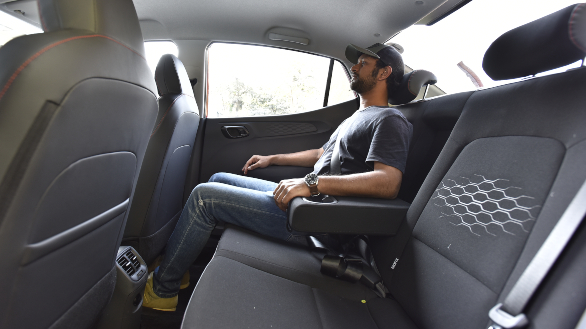 Seating remains as comfortable front and rear, with good levels of space in the rear thanks to the 25mm increase in wheelbase over the Xcent. Though, like in the Nios, three adults seated abreast will still find themselves rubbing shoulders. The main advantage of adding that boot, however, is seen in the huge 402 litres of boot space. Larger than the Dzire's 378 litres, the boot also appears quite wide and tall, even if the loading aperture is narrow. 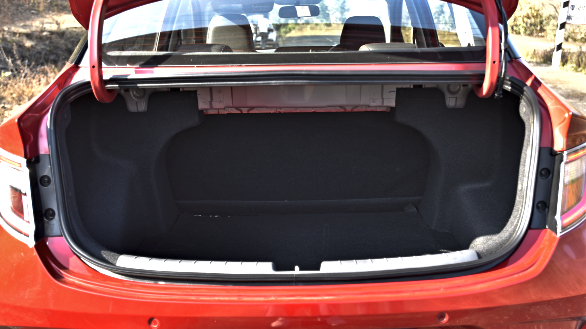 Being the newest motor to the line-up, the 1-litre turbo petrol is our focus. With 998cc of displacement and three-cylinders making 100PS and 175Nm torque, it's a great performer for what feels like a light car, though Hyundai hasn't officially released the kerb weight figures. Compared to the Venue's motor which makes 120PS and comes with a 6-speed, the Aura Turbo is only available with a 5-speed manual gearbox. Despite which, it's earned a 20.5kmpl ARAI-certified fuel efficiency figure. 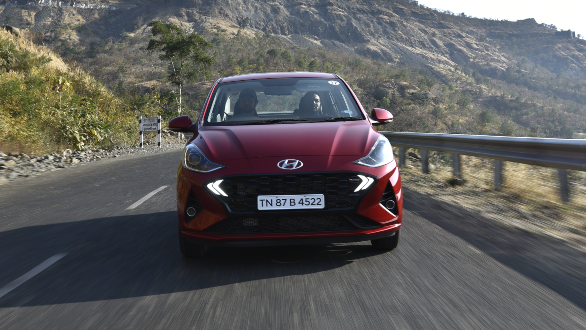 Quiet at startup, the 1-litre turbo wakes up post 1,600rpm or so and pulls very enthusiastically (with the slightest hint of torque steer) through the revs all the way to its 6,500rpm redline, though you can feel it start to strain a bit post 5,000 revs. The tall gearing means that the Aura doesn't ask for a change in gear as frequently as some of the competition, especially in city driving, where it feels utterly calm in third at about 60kmph. Shifts are typical Hyundai smooth, and a light clutch action helps. Out on the highway, at 100kmph the motor's just under 2,100rpm, and is still quite relaxed at about 2,500rpm at 120kmph. Will a sixth gear have helped? We're not entirely sure it's necessary, but it definitely would've given the Aura Turbo a more premium feel. 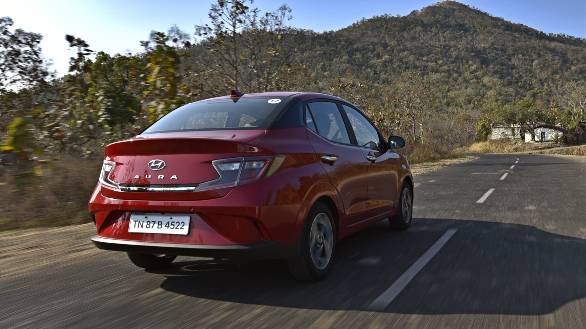 Further, the Aura feels as stiffly set-up as the Grand i10 Nios, itself a firm-riding car. The suspension has been retuned to offset the added weight, but one can't help but feel that something in the equation hasn't been balanced quite right. While it doesn't crash into potholes, the Aura does make sure you feel the road you're travelling over. And the flipside isn't great high speed stability, with the slightly soft-feeling from the rear becoming more pronounced as the speeds rise, particularly around the 115-120kmph mark. This means bumps, dips and crests taken under 100kmph feel okay, but can induce a slight bobbing at speeds higher than that. 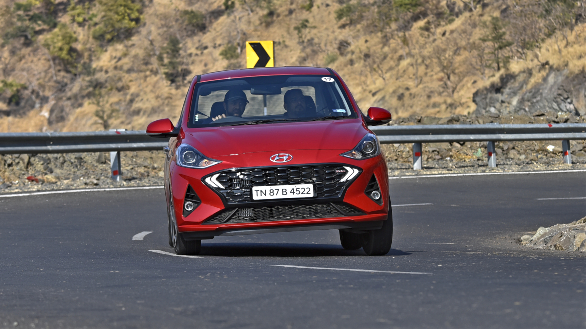 As for handling, on this enthusiast-oriented Turbo, we just wish Hyundai could offer better rubber on it. You can almost make up for the light steering that doesn't want to weigh up a whole lot in corners, because the Nios does like being thrown into a turn, showing a tendency to want to rotate and turn easily, but the rubber just leads to understeer. Wider rubber should also help the feel from the steering, so that's worth considering. Not to mention that it'll help the Aura track true under braking, where it currently feels quite light at the rear and requires a slight correction under heavy braking to stay in its lane.

Is the Aura a much better car than the Xcent? Of course it is, with a more chic cabin and far more features. Is the Turbo the compact sedan for the enthusiast? That we're not so sure about, mainly down to the feel from the steering, or rather the lack of it. At an ex-showroom price of Rs 8.55 lakh, what you get then is a spacious compact sedan that can excite far more than anything else in the market, if you drive it within reason. As for the throwing reason to the wind, it's got a Turbo badge on the front, doesn't it? 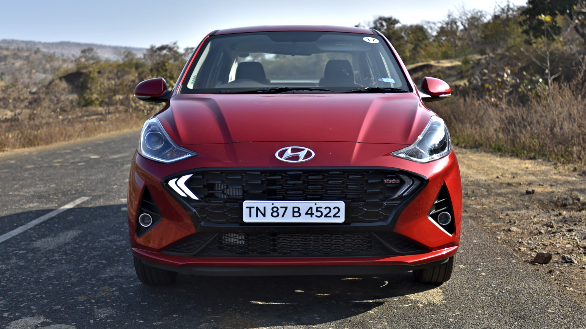