They say good things take time to happen. So if you too had been waiting with bated breath, looking at the calendar every year, KTM has finally answered our prayers and launched the 390 Adventure at an impressive price of Rs 2.99 lakh, ex-Delhi. KTM has always been at the forefront when it comes to creating a disruption in the market and forming a new benchmark. The Austrian motorcycle manufacturer did this with the Duke and RC series making the performance-spec naked streetfighter and supersport accessible to the masses. 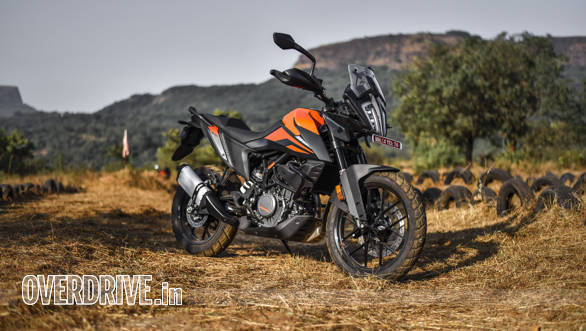 Back in 2013, when the Duke 390-based Supermoto was caught testing, it created a huge wave of anticipation and wish for KTM to bring their Dakar and rally inspired legacy of building off-road enduro motorcycles into a more practical form. And that is what KTM claims to have done. Should this highly anticipated KTM 390 Adventure make it to your garage? We answer the nation.

The 390 Adventure doesn't feel substantially bigger than the 390 Duke but looks more like a scaled down 790 Adventure. KTM has gone for more sleek Enduro styling instead of bulking up the 390 Adventure with a fairing. The split LED headlight gets wind deflectors along with an adjustable front screen. 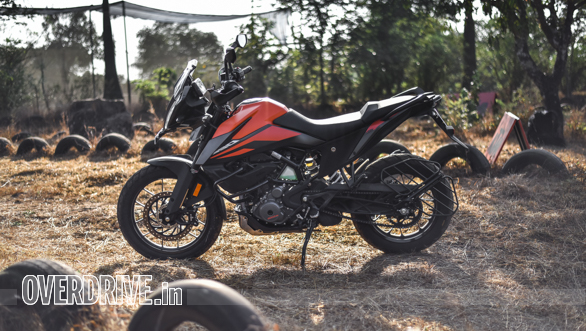 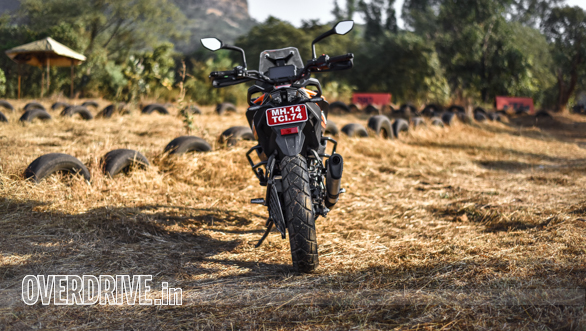 The larger 14.5-litre fuel tank design features extensions angled in line with that of the front deflectors. Also, the sleek tank design and the near-flat side panels ensure the convenience of standing up and riding with great ease. Making its closest rivals look dated is the modern TFT instrumentation that offers a host of information. The switchgear buttons and quality remain unchanged from that of the Duke. The compact tail features a sturdy grab handle that can also help strap luggage. Overall, the build quality is at par with that of the 390 Duke. 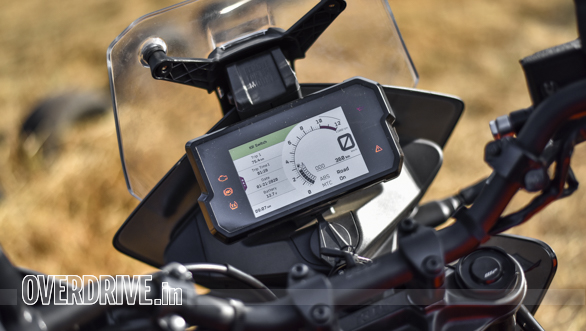 What was a major disadvantage for taller riders on the 390 Duke has been addressed properly on the 390 Adventure as the latter comes with taller and wider handlebars that offer a more upright seating position with enough space for the knees to grip the fuel tank. The seats too have been revisited with a more spacious and larger design for both the rider and pillion, making it a more practical and comfortable set-up for long-distance touring. 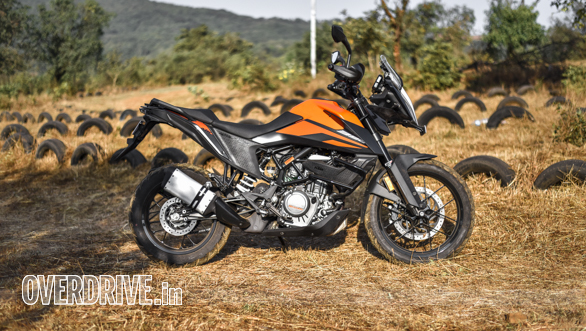 Even on trails, one can easily stand on the serrated footpegs with rubber tops that also work great in touring. The seat height of 855mm does feel intimidating for shorter riders, however, it is just a matter of time before one gets used to it. 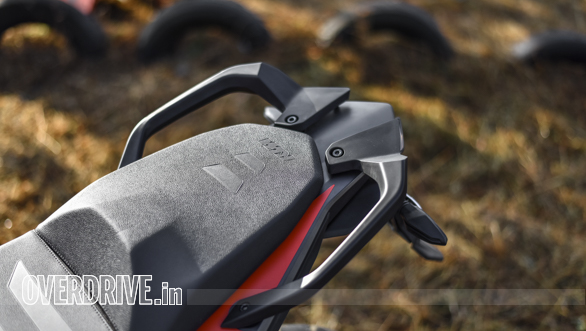 The single-cylinder 373.2cc engine is already known for its impressive performance in the Duke and the RC series. KTM has used the same ride-by-wire set-up as the 390 Duke without changing the state of tune or gearing in the BSVI guise which has also resulted in an identical 43PS/37Nm. KTM claims an overall fuel efficiency of 27.58kmpl on this motor, which effectively translates into a riding range of 400km in a tank full. 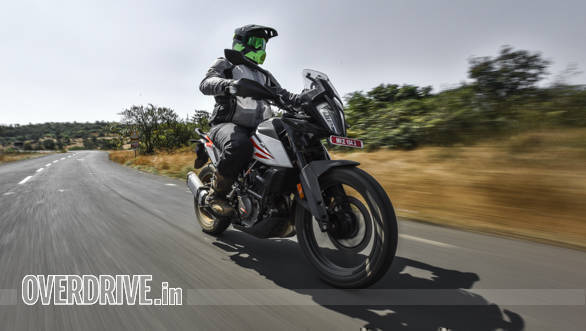 The company has also addressed the engine's perennial heating issue with a new dual fan cooling system, which should help the engine maintain its temperature while riding in stop-go traffic. Thumb the starter, and the motor gets revving effortlessly. In our extremely brief experience of four hours with the motorcycle, we managed to take it on the tarmac as well as venture onto a hardcore off-road track along with some gravel riding. 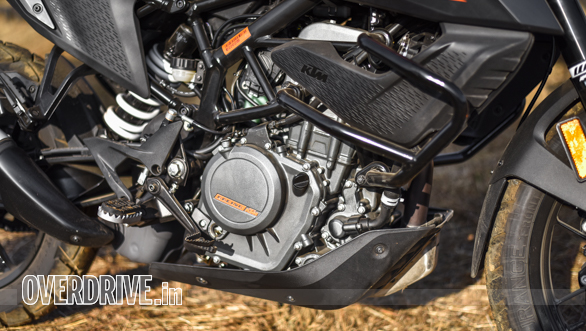 The 390 Adventure weighs 162kg (dry) which makes it 13kg heavier than the Duke. This gets highlighted when you set off from idle. We believe the BSVI tuning has tamed the performance as the power delivery does not feel immediate at lower revs. The characteristics of the 390 Duke's engine are seen in the Adventure as well with vibrations in the 2,500-4,000rpm range. We only wished that KTM could have addressed this in the Adventure to make it more touring friendly. However, considering our test motorcycles were a part of the pre-production lot, this could be taken care of in the final production model. 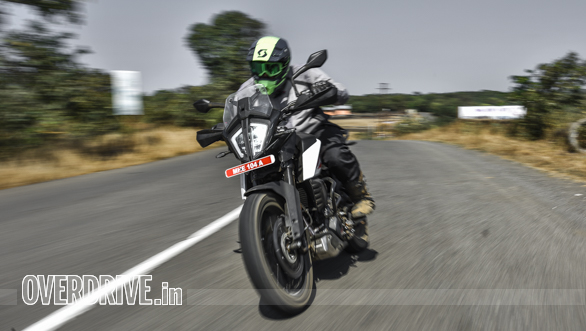 The engine feels in its element as the revs enter 5,000rpm and beyond which is essentially the sweet spot of the 390 Adventure. It is here that you can blatantly open the throttle wide and the engine is more than happy to touch triple-digit speeds and also maintain it, thanks to the 37Nm torque rating. It is in the 4,000-8,000rpm rev band that one can experience the snatch-free quickshifter paired with the light action clutch doing its job pretty well. While riding on long stretches during our ride, the stock windscreen position offered enough protection, which is impressive and helpful to someone with a height of six feet, one inch. 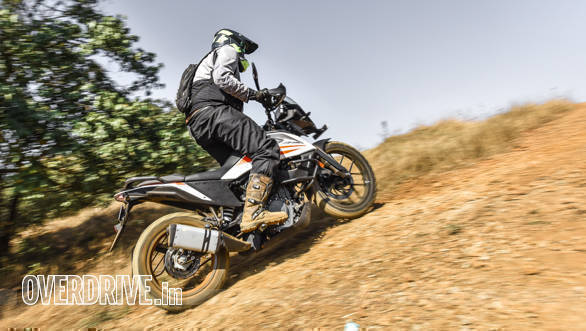 Will it go to Ladakh and back?

The suspension set-up of WP Apex 43mm USD (F) and mono (R) proved to be quite impressive when we pushed the 390 Adventure off the well-paved tarmac for it was quick to overcome the disturbances of the surface. To make sure the motorcycle stays sufficiently away from the ground, KTM is offering a ground clearance of 200mm with a front/rear suspension travel of 170mm/177mm. 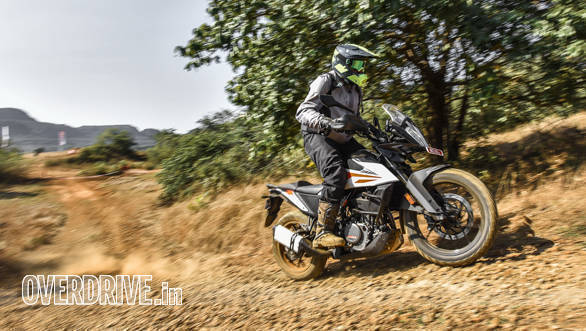 This, however, does not mean that you can hop around like a typical KTM 450 Rally rider. While the motorcycle at EICMA featured front compression and rebound settings, it has been given a miss on the India-spec machine. However, the young ADV comes loaded with cornering ABS and traction control. A few clicks and you can engage/disengage these options, while venturing on off-road trails. There are plenty that you will find on the route from Chandigarh to Ladakh.

Now that you have found the right setting, get up on the serrated footpegs and gas the motor, the amount of confidence that you'll have on gravel is truly enjoyable and entertaining. In fact, if done right, you can pull off some cool slides too, as shown in the product videos. This is also a result of the lightweight Trellis frame which makes the bike easily flickable. 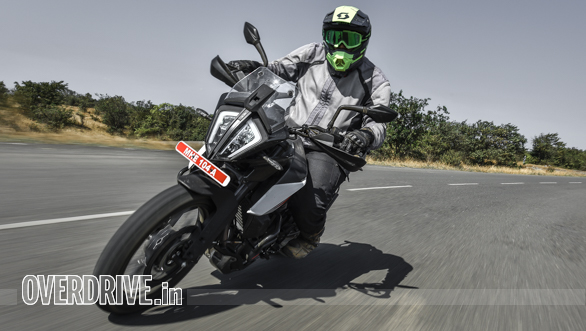 However, if you decide to take it over a hardcore off-road territory which involves steep rocky climbs, things can get a bit tricky. While the lightweight frame and the easy manoeuvrability is helpful, the weaker low-end grunt could cut down your enthusiasm, forcing you to ensure the revs are at the mid-range for the engine to generate enough juice. Impressively, KTM is offering knuckle guards, sump guard and crash protection bar as standard equipment for those unfortunate moments. 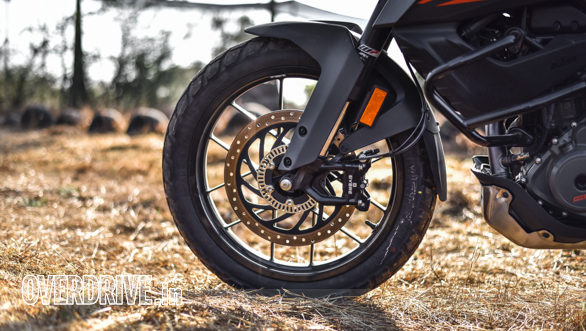 The WP suspension set-up works well on tarmac as well, it effectively irons outs the bumps and undulations and is also forgiving over potholes. The cornering ABS paired with the traction control ensures that you are glued to the surface, even when you are cornering at higher speeds. Further, the 100/90R19(F) and 130/80 R17(R) Metzeler Tourance tyres do an impressive job of gripping the tarmac, and also handle gravel with confidence. The single disc in the front and rear offer enough grip to stop the motorcycle without much drama.

Should the 390 Adventure make it into your garage?

The long list of premium features and a ride set-up that offers convenience of daily commute and highway touring, makes the 390 Adventure extremely practical.
The unaltered state of engine tune from the 390 makes it accessible to all types of riders, from beginners to pros. In addition to first-time customers, we also see the 390 Adventure as a second motorcycle for existing premium bike owners simply for its practicality. 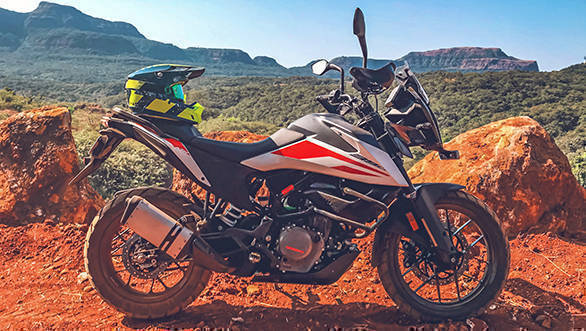 At Rs 2.99 lakh, the 390 Adventure is Rs 64,000 lower than the BMW G 310 GS, making for a tempting buy. If you are looking for an entry-level well-equipped tourer that can also take on trails and do a decent level of off-roading, the KTM 390 Adventure is definitely the one.