I'm doing about 120 clicks in third gear, throttle almost pinned to its stop, on one of my favourite hill roads. I see a crest coming up, a familiar one and twist the throttle further. There's a surge from the engine, the bike picks up more speed and I hit the crest. The next instant has the front wheel pawing high up in the air and I cannot help, but break into a smile. I back off the throttle after enjoying the airtime, get onto the brakes for the upcoming corner and again, the bike behaves like it belongs to a segment above. "This is one crazy machine!" I mutter inside my helmet. The 790 is a motorcycle that has big aspirations for KTM in our market and tries to belie being 'just' a middleweight naked streetbike. It has the aggression of a full-blown, 150PS litre-class naked and will have even seasoned riders gawk at its abilities. It impressed us to no end at the Bajaj test track, but that's just half the story. Time to now see how good it is out in the real world. 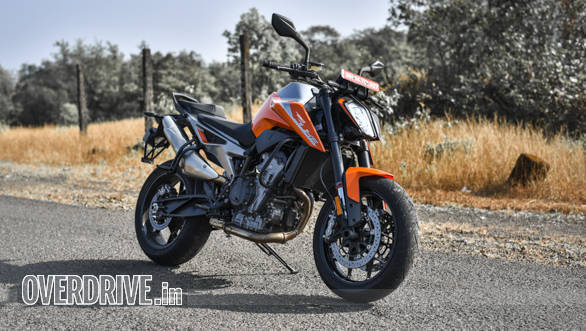 The 790 Duke proved to an explosive middleweight naked streetbike on track, but does it impress as much on the road?

I like KTM's minimalistic design approach  that has been a trait with all Dukes, but the 790 looks particularly appealing. And that has a lot to do with the sharp edges and the fuel tank's hump which sits shrouded by orange plastic panels. The headlamp and rear view mirrors look exactly like the 390 Duke's though, which takes some of the premium quotient away. That said build quality, fit-finish levels, quality of plastics and surface finishes are all top notch. The fat front forks and twin 300mm discs mean business visually, as does the 180mm wide rear Maxxis Supermaxx ST tyre and overall, the 790 Duke is every bit a streetfighter. I also the like the TFT display for the amount of information it offers despite its compactness, though I would have liked the colour scheme to be brighter for more visual appeal. 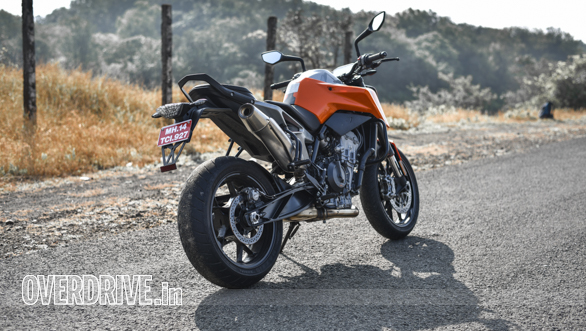 The KTM reeks of aggression from end to end, more so from the rear thanks to the 180-section tyre and the minimalistic design of the tail piece

The 790 Duke is the first big KTM in India and its equipment list is impressive for the middleweight naked segment  not just the hardware but the software too! In fact, the 790 Duke boasts one of the most comprehensive electronics suite in its segment. Well, it is the only middleweight naked in India to boast launch control and an IMU which brings niceties like cornering ABS and wheelie control, seen only on bigger, more expensive machines! There's an electronic bi-directional quickshifter as well that can be turned off through menu settings, though admittedly, the acceleration is too aggressive to not want to use the quickshifter  more on that later. There's four riding modes including Rain, Street, Sport and Track. Power delivery, throttle response and traction control can be adjusted in Track and you can choose from nine traction control levels and alter throttle response. 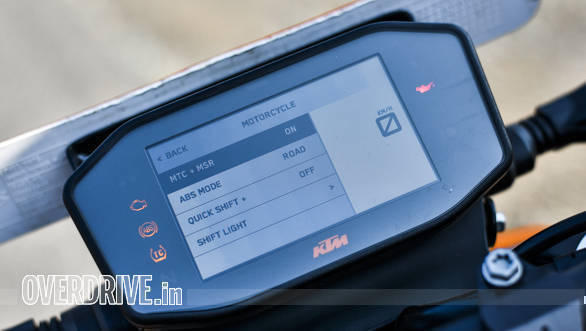 The 790 Duke also gets what KTM calls MSR (Motor Slip Regulation), which is the opposite of traction control in a way. Traction control cuts engine power when it detects the rear losing traction under power, but MSR essentially detects an impending wheel hop if the rider downshifts aggressively and closes the throttle abruptly. So while TC would effectively shut the throttle, MSR opens it, working with the slipper clutch, to match engine revs to the rear wheel speed to avoid hopping. And as I found out, this works wonders if you hit a patch of water and downshift and close the throttle at the same time in a panic situation.

As I found out during the first ride, the 790 Duke's acceleration is easily the most aggressive in its class and KTM's engineers deserve a big thumbs up for the way its 798cc, liquid-cooled parallel-twin motor has been tuned. But while the manic performance was more than welcome on track, I was curious to see if the aggressive performance can be a little too aggressive on the road and boy it is. As I mentioned, the 790 Duke feels closer to litre-class machines and can stun even the most seasoned of riders. Rohit, the only one in the team to own a supersport machine currently, was surprised by how quick the 790 was and so was I. On paper, 105PS and 87Nm might just be par for the course, but the way the KTM puts its power down makes a difference. Every crack of the throttle  be it from standstill or through the gears  has the bike build speeds rapidly. The engine also builds revs quickly, aiding acceleration. 3.8 seconds is all the 790 Duke took to accelerate from 0 to 100kmph in our VBOX tests. In fact, the rear tyre was on its last legs when we were testing and fresh rubber should help in shaving off another two-tenths of a second, which is legit superbike territory! 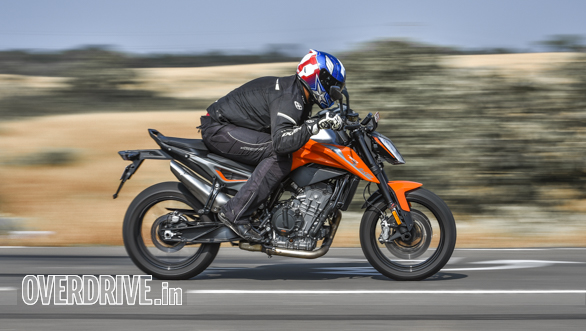 Rolling on more throttle at almost any point of time has the bike offer its full wealth and it's surprising how linear the torque curve is. The frenzied power delivery can thus be slightly overwhelming for inexperienced riders and I'd advise a word of caution to novices wanting to twist the 790's throttle. Drive out of corners is addictive too, while precise fuelling results in very predictable outcomes when you open the throttle, which is likeable. The engine also feels very smooth, courtesy two balancer shafts that help curb the vibration  there is a hint of vibration, but that's more of an intrinsic part of the motorcycle's character. Then there's the quickshifter. As mentioned above the 790 Duke is so quick, you might find actuating the clutch manually a bit of a chore when giving it the beans. So it is best enjoyed using the bi-directional quickshifter. That said, the system is a little too sensitive and even slight pressure on the gear lever causes it to cut engine power momentarily, assuming you are changing a gear. This was an issue when riding normally and was even more prominent when pulling wheelies, as I like to load the gear lever with my foot to shift up if required. The pressure on the lever though resulted in the sensor getting actuated and cutting power, bringing the front down. 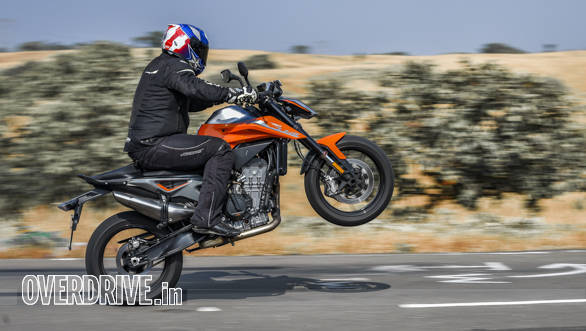 The quickshifter also works best at higher revs, like most race-derived systems and calls a bit of effort at part throttle. We even tested the 790 Duke for fuel efficiency and the bike managed 18.2kmpl on the highway while returning 14.8kmpl in traffic, which is reasonable. Overall, the engine and its performance are certainly the stars of the 790 Duke's show, though that certainly is not it

On track the 790 Duke felt every bit like a track tool, doing full justice to it being nicknamed the scalpel and has the same appreciable feel on the road too. You can attack corners with a razor sharp precision and the big Duke belies being 'just' a middleweight naked with its intuitive, uber-sharp handling courtesy its suspension setup and tubular frame. The 43mm upside down forks impress immensely, not just in terms of letting you turn quickly, but also in terms of offering excellent feel and feedback. That said, their setup is a little too firm for our roads as the front feels stiff on broken roads. The forks' ability to ensure the bike retains composure on undulated roads is commendable but potholes, ruts and the like call for slowing down. 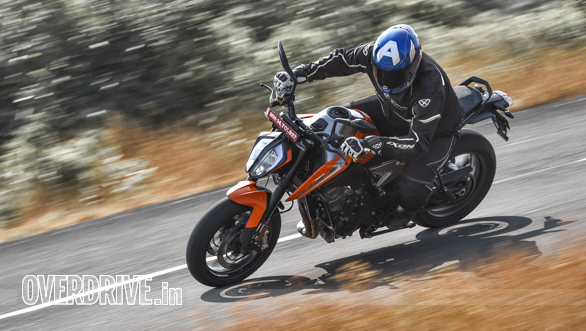 Moreover, the front forks are non-adjustable, which is a bit of a downer on an otherwise well-specced bike. The rear monoshock is relatively softer though, besides being adjustable. The Maxxis tyres deserve credit as well  they impressed immensely on track and feel as good on the road, offering excellent grip. The ergonomics are likeable on the road too, as you crouch forward just a bit and the handlebar offers excellent leverage. That said, the rider's seat could do with thicker cushioning and I also felt the seat should have been angled further downwards. The seat is long which makes it accommodating but every time you accelerate hard, its flat angle means you slide backwards, especially in a leather suit. On another note, brakes are impressive, be it in terms of stopping power or the progressive feel and shedding speeds quickly is a cinch. 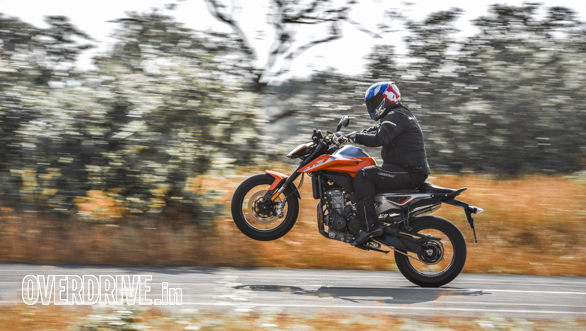 The KTM 790 Duke belies being 'just' a middleweight naked with its aggressive power delivery, handling and comprehensive electronics package

The 790 Duke is an excellent proposition if wanting a fast, capable middleweight naked. It also has what is easily the best electronics package this side of litre-class machines, which adds to its engaging nature. Given the explosive performance levels, pushing the 790 Duke close to its limits is not easy, but the bike certainly rewards experienced riders by letting them push their own boundaries. The bike retails at just over ten lakh rupees on road, Rs 10.05 lakh to be precise, which feels expensive. Sure, the bike has a lot to offer, but a lower sticker price should make it a lot more enticing.