The apple doesn't fall far from the tree, that's the philosophy that Mercedes Benz has employed with their first electric SUV, the EQC. It's a good strategy  rather than make a science experiment, it's simpler to apply a new technology to an established product. 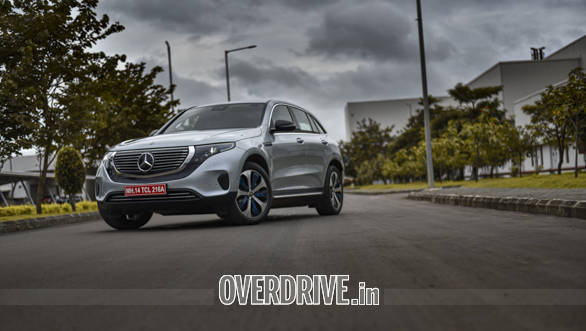 And the Mercedes-Benz EQC 400 certainly hasn't fallen far. It's straight up the GLC, which donates much to the EQC, except you trade in an internal combustion unit for an electric one. The green credentials of the EQC instantly put you in a different league, gives you more bragging rights and allows you to make a larger statement. At an expected price of almost a crore of rupees, if not more, you definitely want the loudest bragging rights and the biggest statement that is out there, and the EQC 400 fills the dotted line to the E. 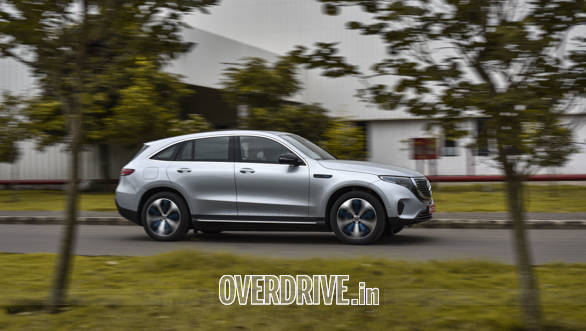 Let's begin at the top of any EV, and that's its motor, battery and battery management system. In the EQC there are 2 asynchronous motors, one to drive each set of wheels at the front and back respectively. Default mode is 2-wheel drive, with the front motor driving only the front wheels. This is in the interests of efficiency, to extend the battery range. When you require a boost of torque and step on the throttle, it engages the rear motor instantly and that gives you access to the full range of torque in an instant powering all four wheels in this case. Boom! The EQC 400 gets energised and flies off with a savagery seldom encountered in any ordinary internal combustion engine vehicle. The acceleration is intense, you can feel the momentum push you back into your seat. It is also unexpected, because the EQC looks unassuming for the kind of performance it is capable of. All of this is par for the course, any electric vehicle behaves in the same manner. What distinguishes it is also the absence of the high-speed whine that an electric motor emits at speeds above 10,000rpm. The EQC 400 is quiet, inherently, and the electric motor continues that smooth silent action. Even road noise has been damped out by tweaking the sound deadening elements. It is a Mercedes at the end of the day, and the EQC's strongest suit is the lack of noise inside the cabin. 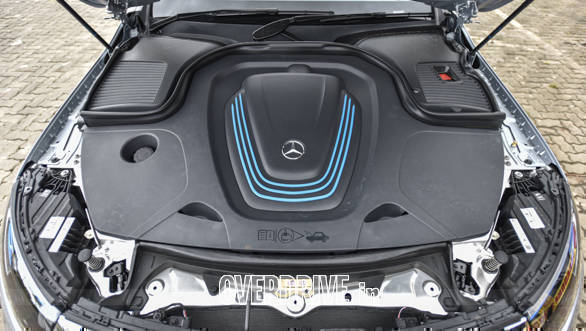 Between both the electric motors you get the equivalent of 408PS with 760Nm of max torque. Those figures are enough to warp the EQC 400 off into supercar territory and it shows with a 5.1 seconds 0-100kmph claimed time. Top speed is however restricted to 180kmph. 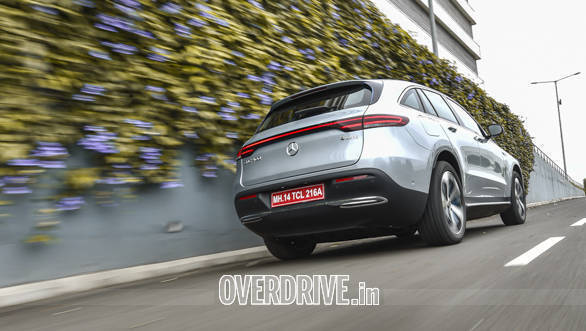 The EQC 400's battery is an 80kWh Lithium-ion unit and is produced wholly by a Daimler subsidiary called Deutshe Accumotive. Its sits under the floor pan in a specially constructed housing that makes the battery an integral part of the crash concept. It is however narrower than most competitor packs and this allows for better crash absorption on the sides. 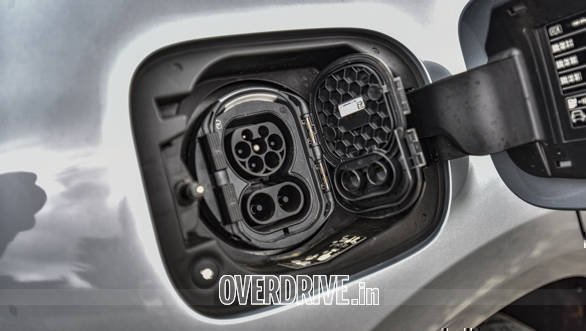 Charging the battery can be done in one of three ways. First is a portable charging unit that can plug into a high ampere 3-pin socket. This is meant for a 3.4kWh output with a max charging capacity of 7.4kWh and gets you full charge in 21 hours. A bit slow for me, but you can then get Mercedes-Benz India to install a wall-box unit at home that has a higher 7.4kWh output and charges your battery in just around 10 hours. Quick chargers that start at 50kWh but are capable of going up to 110kWh can charge the battery anywhere between 90-40 minutes respectively. NEDC (New European Driving Cycle) tests put the range of the battery at anywhere between 450-470km, but a more realistic range should be around 300-320km. On our first drive experience we covered a distance of around 290km with a 35 percent charge unused at the end. 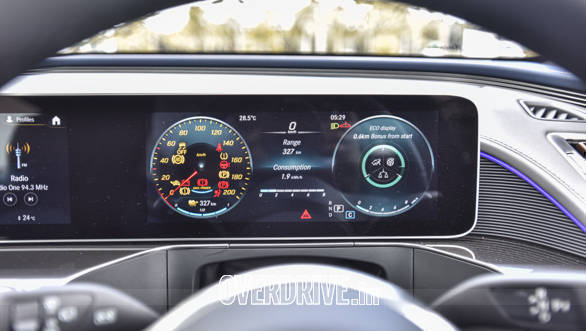 Staying true to tradition, Mercedes-Benz also offers the dynamic mode selector in the EQC 400. You can choose from four driving modes. These are Eco, Comfort (this is the default mode when you start the car), Sport and Maximum Range. Eco and max range physically disallow you from pushing the EQC too hard, and the green lights ringing the cluster disappear, while max range makes the accelerator pedal harder to push down on  it actually resists pressure from your foot to reduce consumption.

The entire battery management system has several functions; primarily, however, it manages the cooling of the battery through a liquid cooling system and energy management between the battery and the various hi-voltage components. These components are the battery, the air-conditioner compressor, heating elements and DC/DC convertor to power the 12V components. 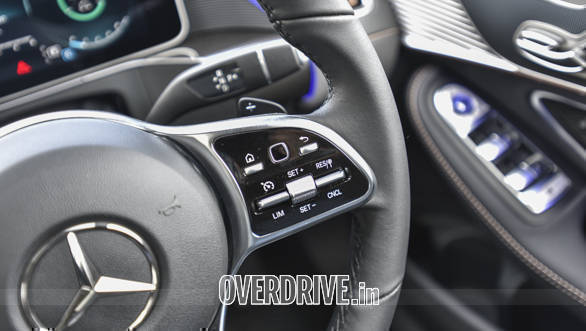 The EQC also regenerates energy that is fed back to the battery using brake recuperation but it also does the smarter thing, reducing energy consumption using coasting. A two-step brake regen can be selected by using the paddle shifts to select D+ or a D++ driving patterns. Using the coasting however sees the quickest increments in range, and on our drive which wound itself through the Mumbai-Pune expressway, the coasting facility gave us the best efficiency. The brake regen options in either D+ or D++ mode is not the most comfortable way to drive the car and should ideally be reserved for when you're either in crowded urban areas or driving on a highly curved stretch of road. In D++ its also possible to drive the car without using the brake pedal at all, that is how ferociously the regenerative deceleration operates. 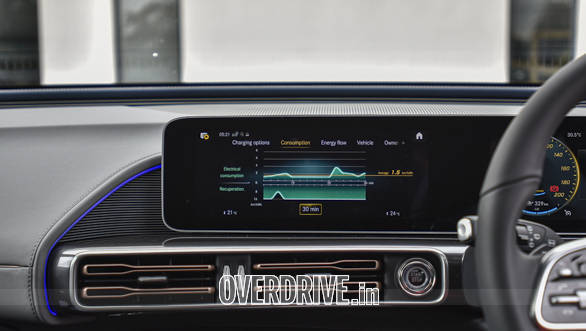 When you feel range anxiety creeping up your spine, it's time to shift it into D or ideally D- that uses the coasting function to increase range. You can actually see the range climb up in this mode and you don't even use the throttle pedal. In fact, as we discovered on our drive in the western ghats, in the D+ mode there is enough juice in the EQC to drive you uphill at reduced speeds without having to use the throttle at all.

The EQC 400 is refined, that is its greatest asset. Ride quality is on the stiffer side and there isn't much suspension travel but its comfortable enough to complement the three-pointed badge on the nose. Body roll is very evident and the EQC is best experienced in a straight line or driven more sedately. Don't go hunting for corners; rather, drive the EQC sedately, enjoy the luxury and you've got a good thing going. Steering otherwise is precise though it stays light and easy throughout. 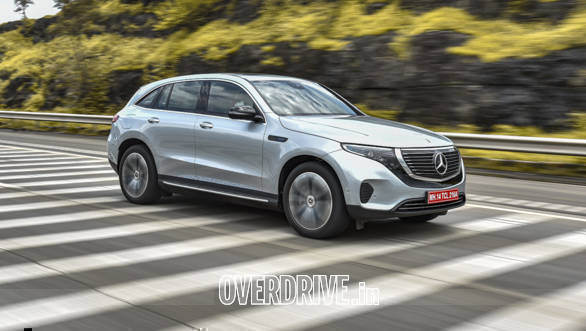 The EQC 400 also sits pretty low despite being classified as a SUV, and this results in it scraping its underbelly on large speed breakers. It would have been great to have got the adaptive dampers with ride height control in the setup, but this would probably have raised the price even further. As of now you just get steel-sprung double wishbones at the front with a multi-link air-suspension system at the rear. 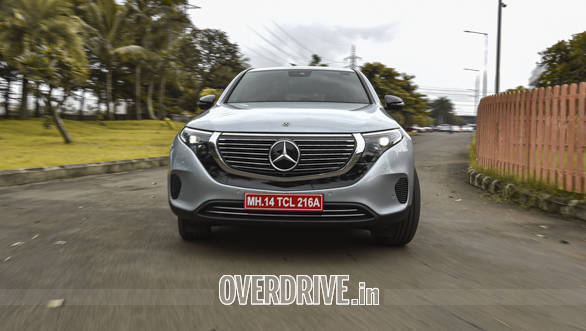 The EQC 400 is a full-fledged luxury SUV treated in a slightly different setting. You don't get the next Mars Rover, instead take a close look and you can detect hints of the GLC. The ornamentation is new, a bit fancy in places but the overall look and feel does not deviate much from the original. The alloys with the ribbed blue streaks add that little drama from the future, the headlamps and the slim light strip running across the hood, the illuminated three-pointed star, it's all smoke and mirrors. Behind the illusion lies a Mercedes-Benz in every way. You get that sense of elegance and flow that this generation of Mercedes-Benz cars is known for. 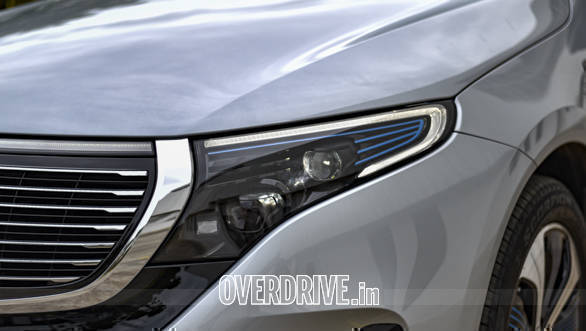 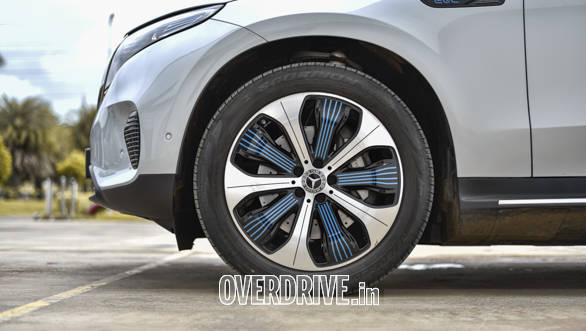 Having taken out the combustion parts and associated systems leaves a lot of vacant space, but Mercedes cleverly have left elements such as the steel tubing that housed the engine, transmission and other parts intact. This was done to ensure there was no compromising the safety structure. However, in doing so, the EQC 400 is roughly around 150kg heavier than if it had been designed wholly as an EV, bringing its weight up to a massive two and a half tons. Interestingly weight isn't a disadvantage here, the heavier the car the more energy can be generated from brake energy recuperation.

You step into a familiar cabin. The EQC 400 has all the standard trimming expected in a Benz. The only distinguishing mark is the rose gold louvres on the air-con vents. Everything else is exactly the same, and that's a good thing. Its familiar, comfortable, and instantly gratifying. 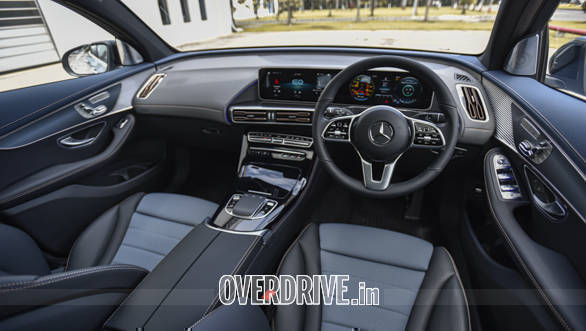 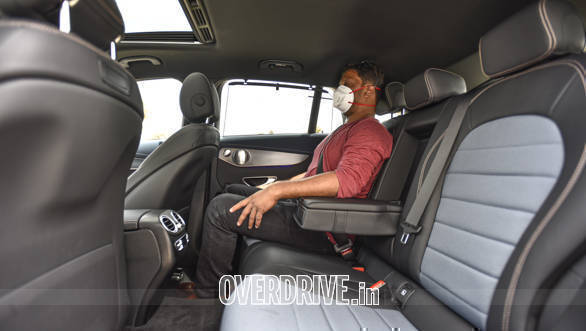 Space is generous but because the EQC is built on the same base as the GLC, interior space is lesser than what you would get on the I-Pace for instance which would be launched in India sometime in 2021, and has a longer wheelbase. Even the e-tron is much larger since it was built from the ground up as an EV which meant its engine bay could be made smaller but cabin much larger. Nonetheless the EQC has a comfortable and lavishly appointed cabin that sits well with the brand. It's quiet on the inside and sound insulation is superb, even road noises are filtered out. And you have all the gadgets you'd need at hand to make any journey enjoyable. Even switch on to the EV driving assistance mode on the main screen to see just what the vehicle is up to or what you are doing to either drop or enhance the range. It's a bit of fun, and a great way to keep the kids occupied if they are with you.

Mercedes-Benz offers an 8-year or 1.6 lakh kilometre life cycle certificate on the battery and this is applicable in India too. In addition, you also get the portable charging unit along with the car. Mercedes-Benz India will also provide the installation for the wall-box unit, all set up at a cost of course. There is also talk of setting up the fast-charging stations around the country, perhaps starting off with the dealers and then at certain strategic locations as well. 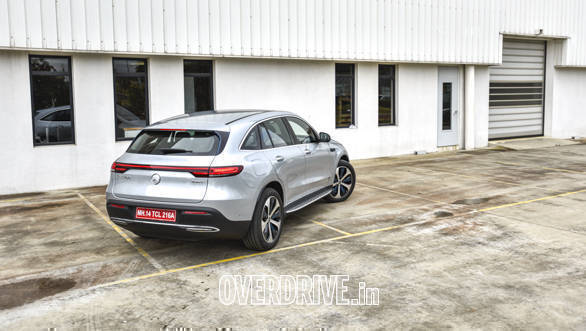 For being the first luxury electric vehicle in the country, the EQC 400 has much to offer. There is still lots more for us to discover and on our short drive that had to be shared between photography, filming, and driving between Rohit and me, there wasn't much time to assess all that the EQC has to offer. So, more electricity will be spent in the quest to understand more about EVs in this space.

What I can tell you with some authority is that the EQC carries forward certain key elements from Mercedes-Benz's legacy. It is luxurious, superbly quiet and has the right mix of ingredients to make it appealing. Perhaps the EQC badge should be read as Electric Quiet Comfortable. The EQC nonetheless is still a statement, definitely not your only purchase, but certainly the buy to set the bar and tone in your peer circles. 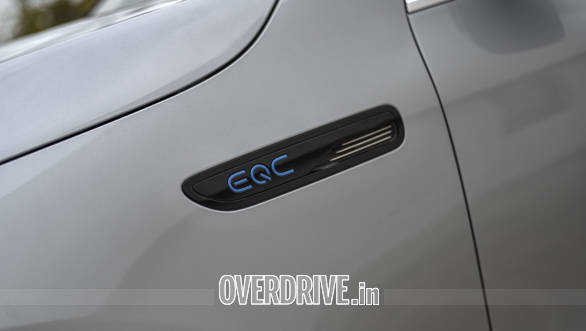