So far, if you've wanted a Skoda that satisfies your driving itch, the Octavia has been the one to go for. The Superb, conversely, has ticked all the boxes towards being a great businessman's express.

But with this generation of the Superb, Skoda has mixed things up a bit with the Superb Sportline. Armed with sharper looks, this is aimed at someone who enjoys the front seat as much as they do the rear. Skoda has further doubled down on the Sportline with the Superb's recent facelift, with new looks and a BSVI-compliant petrol engine. Has this been a convincing exercise? We aim to find out. 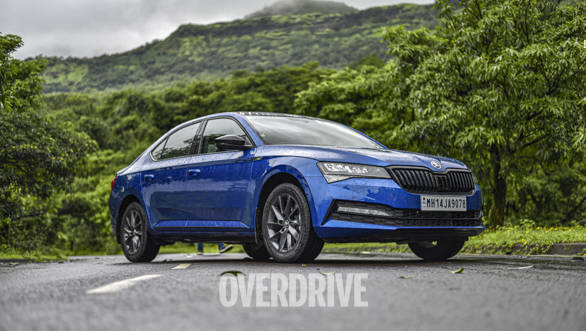 With this facelift, Skoda has shown restraint and changed only what was needed to accentuate the Superb's straight-edged looks. The front has been given the most attention, with the new full-LED headlamps and their four-segment look. There is a slightly larger interpretation of the Skoda-signature butterfly grille too, as well as a new bumper that now features those wide LED foglamps, larger air dams and a functional-looking wind-deflector on the edges. 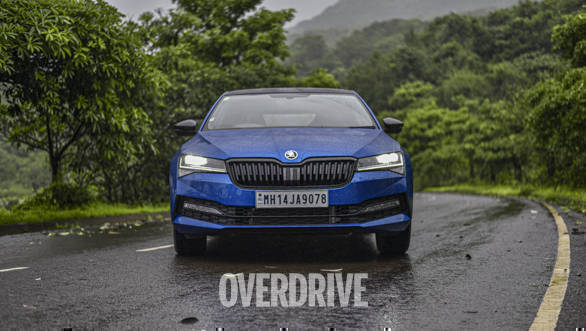 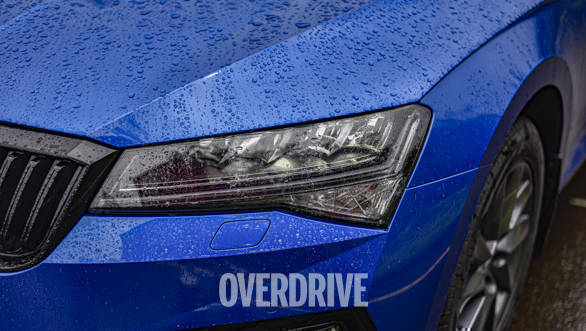 The rear has been fettled with even less, you get new details in the LED taillamps, whose indicators are now the Audi-derived progressive types, a strip that connects the two lamps and wide Skoda lettering. Finally, there is a mildly different faux rear diffuser. The simple shapes and sharp lines that Skoda uses on its cars age very well, and these minor changes have done just enough to keep the Superb looking fresh. 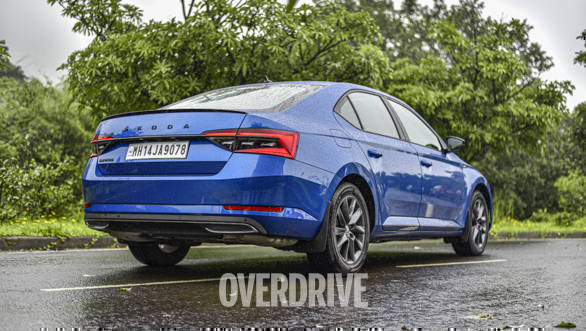 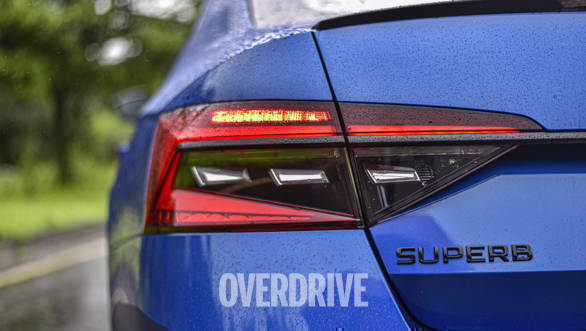 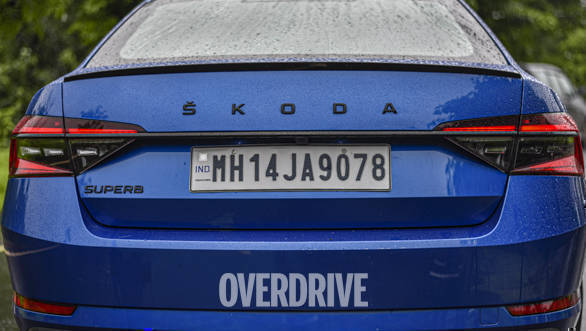 More effect, though, comes from the bits unique to the Sportline. The gloss-black grille, Sportline fender badging, matte-grey lettering and the dark rear strip gel very well with the Sportline's colour palette derived from the brand's RS models. The new Race Blue option on this car is probably the most striking, along with the Steel Grey carried over. Surprisingly, the red paint option from the pre-facelift Sportline has been discontinued, which we think is a misstep. We also would have liked a new, upsized set of alloys for this model. The 17-inchers on this car carry forward the same design as the pre-facelift car, but with gunmetal finish. A set of 18-inch wheels with a sharper design would have tied the entire package together better. 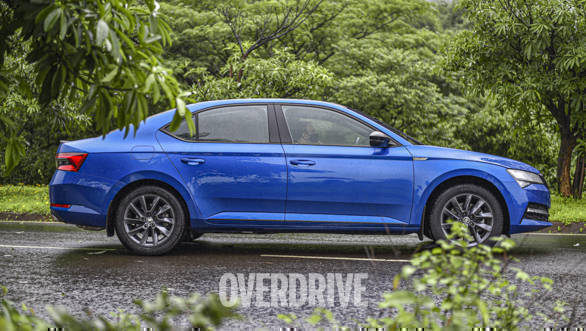 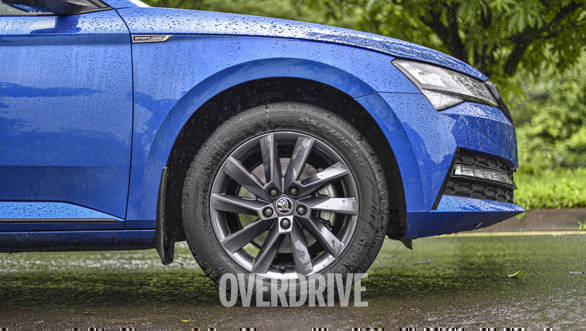 Does it go as fast as it looks?

The biggest change for the Superb facelift is that it now features the latest iteration of the VW-Group's EA888 petrol engine. This is now a 2.0-litre unit, a development of the earlier 1.8- turbo-petrol motor. The increased displacement has come from a longer stroke, while the pistons, valves and cylinder heads have been updated as well. There is also a reworked turbocharger. To meet the latest emission norms and improve efficiency, the engine features a dual injection system, using a mix of port and direct injection and a particulate filter. Further, the VTEC-style valve timing system has been reworked too for sharper performance. 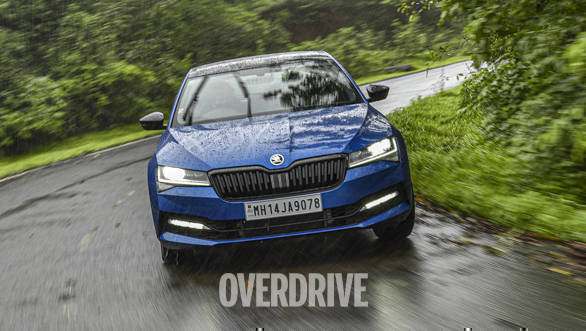 The new motor now makes 190PS and 320 Nm. This is a 10PS increase in power and a significant 70 Nm increase in torque over the older 1.8. In our tests, it managed the sprint from nought to 100kmph in 8.1s, that's as quick as the old Superb diesel 2.0-litre and faster than the 1.8 petrol by half a second. In practice, at very low speeds when the engine is off-boost, there is a slight gruffness both in its note and power delivery. But things improve drastically from thereon. After 2,000 rpm, there is a massive surge in power which lasts just past 6,000 rpm. We've driven a few similar engines over the past year, but this motor is right at the top where mid-range acceleration is concerned. The aggressive, throaty note from the unit at this time further enhances this experience. Whether you are attacking a bend aggressively or trying to get past that slow-moving truck in traffic, the engine will always keep a full load of grunt at your disposal. Our in-gear timings showed that this ability extends right up to highway speeds. 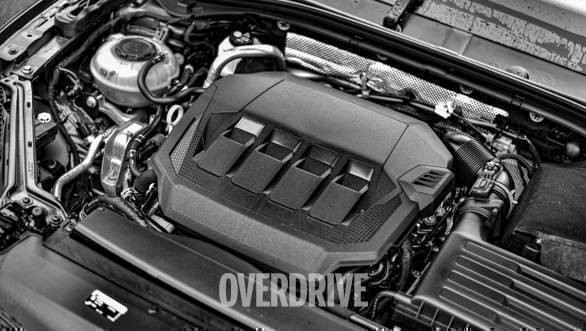 Speaking of highways, the massive jump in torque means that you don't miss the diesel engine all too much. The petrol Superb behaves in much the same way as the diesel. In fact, with slightly more power at your disposal and more revs to play with, the Superb more feels more alert in these situations.

As has always been the case, the seven-speed DCT remains one of the most intuitive out there. Even without dedicated drive modes in the Sportline, the gearbox adjusts to your inputs without a fuss. The sport mode sharpens shifts further and holds revs right up to the redline. There are paddles as well if you want to take charge completely. 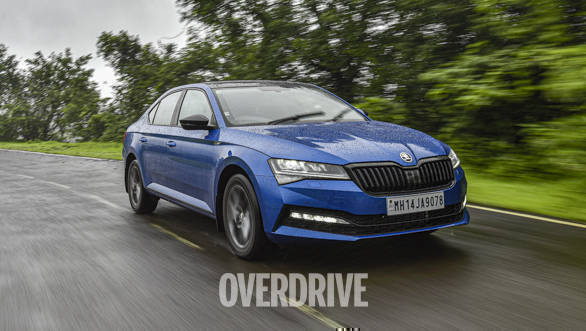 The rest of the dynamic package remains unchanged with this update. We like that the hefty, alert controls and light but precise steering continues. We don't like that the Sportline doesn't get a unique suspension tune. The very European setup that remains poised at all speeds, and takes care of all but the sharpest of bumps, works very well for the most part. But hustle it along, and there is bit more body movement than what we would have liked from a sophisticated sports sedan such as this one. Going back to our earlier grouse, grippier rubber would have also worked very well here. This is in contrast to the work Skoda has put in to improve the Superb's brake feel. The sharp initial bite has been smoothened out for a more progressive feeling, easily modulated pedal. This hasn't come at any discernible effect on performance. 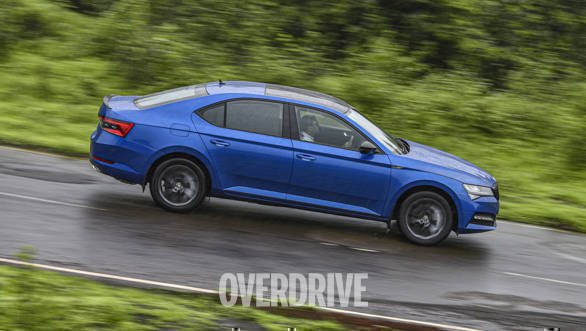 How are things on the inside?

Uniquely, Skoda has not made its sportiest Superb the range-topper. This hasn't happened often before in India, but may just be a great idea to get more drivers back into sedans. Consequently, the Sportline loses out on some features alongside the Laurin and Klement. But you wouldn't know it at first. The all-black interior uses swathes of Alcantara on the doors and seats while the dash now features carbon-fibre patterned plastic inserts. The Sportline also features a chunky flat-bottomed wheel. The expected levels of quality remain here, and these dark materials bring a certain directness to proceedings. 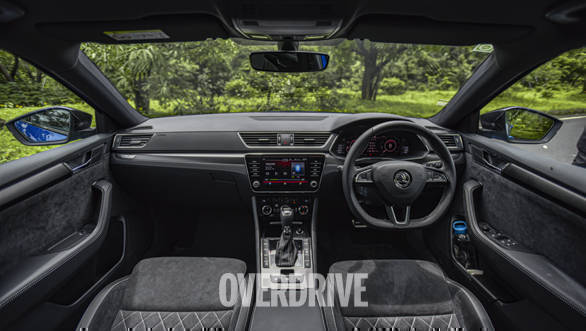 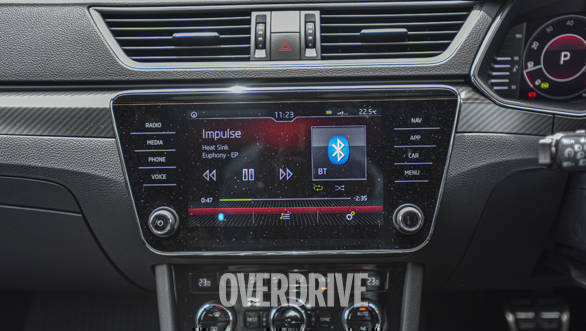 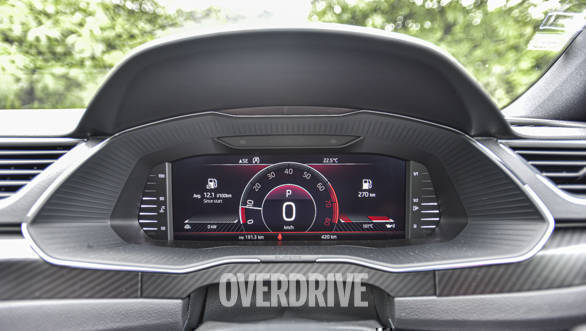 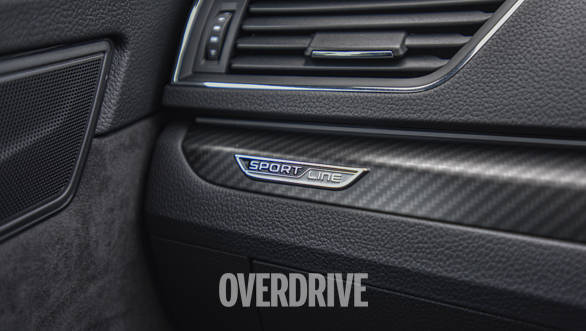 Skoda has pandered to the driver further with some very supportive single-piece sport seats(which also free up some more of the already generous rear-legroom) and making the Virtual Cockpit exclusive to this trim. The seats are fully adjustable as well, with lumbar support. Other feature highlights are the panoramic sunroof, three-zone AC and ambient lighting. There are even puddle lights with Skoda lettering and a powered tailgate. We only wish Skoda had added the 360-degree camera and TPMS from the L and K. These features fit the Sportline's brief better than the luxury-focused L and K. 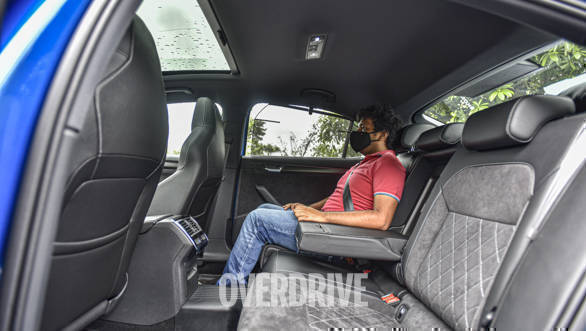 Priced at Rs 29.99 lakh, the Superb Sportline is a lot of car for the money. Combine this with the four-year warranty, maintenance and RSA packages on offer, along with a buyback option after three-years, the Superb should also be easier to live with than earlier. 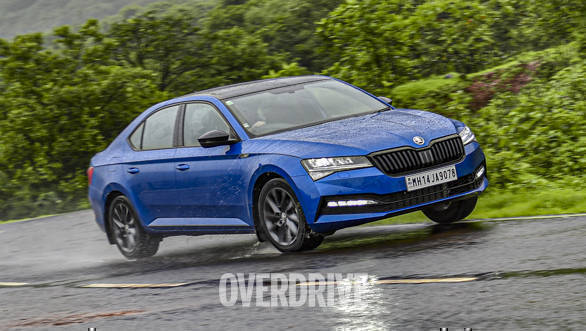 The new petrol engine is a worthy replacement to the well-revered 1.8 and even in a sea of SUVs, the Skoda Superb Sportline has enough to grab attention. It could have been more tied down but in a segment that has pretty much been entirely wiped out by our affinity towards SUVs and luxury brands, we need cars that will bring drivers back. The Superb Sportline has just the right mix of performance, luxury, stature and value to do that.