Let's start with a bit of a backstory. At the 2018 OVERDRIVE awards, we were Madras Motor Race Track in Chennai to execute the judging process. As you would expect there was a big line up of motorcycles from that year to ride around. By the end of it, I was fixated on the BMW S1000RR. "What a motorcycle!" I kept exclaiming in my helmet. I couldn't stop riding it until the sunset forced me to. Not like it was the only fast machine available for us that day - there were amazing Triumphs and Ducatis too. But nothing came close to the excitement benchmark that the S1000RR set for me that day. Yet, one bike that managed to stand out and put a smile on my face on every lap I took it out, was the TVS Apache RR310. 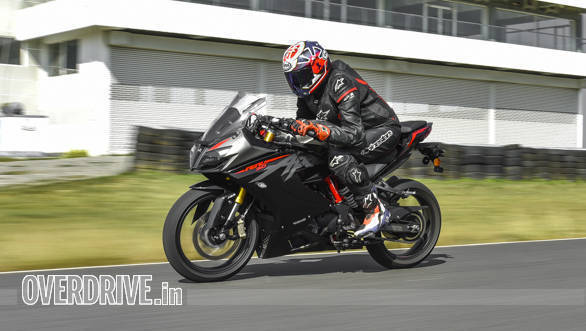 Yes, it's nowhere as manic, not as powerful, nor as sharp a handler as the S1000RR. And yet it is so enjoyable. The way it lets you push your limits, you know it is cut from the same fabric as the S1000RR - and no I'm not hinting at the BMW engine or TVS' relationship with the Germans. I'm talking about this being a true supersport. Even though we have often called it an all-rounder which is just as good at sport touring or commuting - it doesn't feel like a compromise in the supersport universe. If you were to chart a natural progression course in the supersport genre, starting from the YZF-R15 all the way up to the litre-class stalwarts like the S1000RR, the RR310 fits right in as the second step you could take on the way up. In the wake of the BSVI emissions, the motorcycle has been given yet another update - and in typical TVS fashion, it is quite a sizeable one - a BSVI compliant engine, new electronics, a jazzy new dash, smartphone connectivity, a new two-tone colour scheme and new rubber! 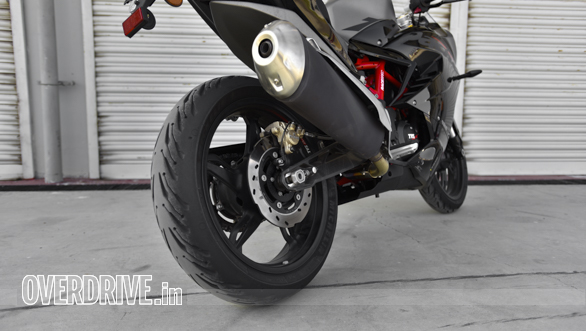 The BMW defined reverse inclination of the cylinder head means that the exhaust header pipe is smaller and the canister has to hold all of the sound and emission curbing equipment. For the BSVI conversion, the internals of the canister have therefore undergone the redesign. So you don't see the bulge of the pre-cat on the header pipe, the weight on the exhaust system has gone up by around 1.5kg because, and the sound is a tad bit deeper than before. 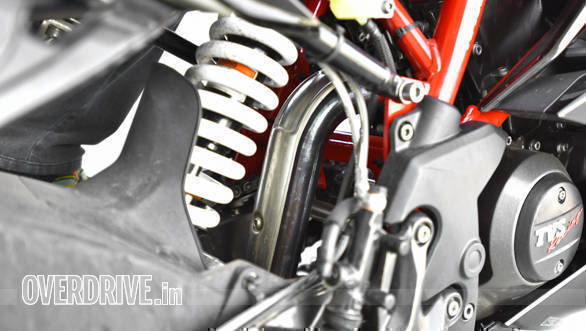 The engine is still the familiar 312cc single-cylinder BMW-sourced motor and it puts out the same 34PS of power and 27Nm of torque. So interestingly, there is no displacement gain or a power loss in this BSVI conversion. That's good news. The better news is that this engine now comes with four riding modes to suit the environment you are riding in - Track, Sport, Urban or Rain. These come courtesy of a new ride by wire system. These systems are expensive to integrate, but I'm glad TVS has done that, as it brings along a wealth of functionality and refinement. 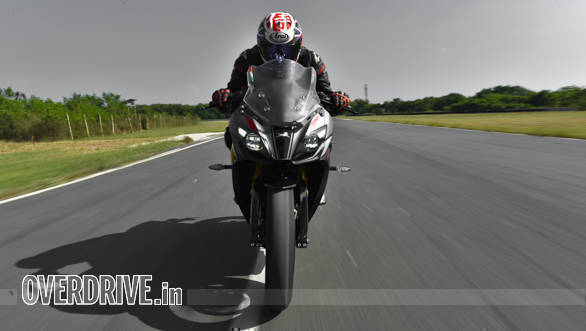 The riding modes will not only alter throttle response, but they will also alter the amount of power going to the rear wheel. Track or Sport gives you all the 34 horses, while the Urban mode limits the bike to around 26PS and 25Nm. By only marginally restricting the torque, TVS has theoretically ensured that the tractability in the city isn't affected much. While the reduced power and a different throttle map theoretically ensure improved fuel economy in the city over the BSIV engined RR310. On the highway, the precise fuelling from the ride by wire system ensures economy benefits too. That's good news again. The other benefit of restricting the power in the Urban mode is reduced mid-range vibrations - an area that this 312cc engine has often been ridiculed about. It will be interesting to see if BMW employ a similar solution for their G310R/GS models. 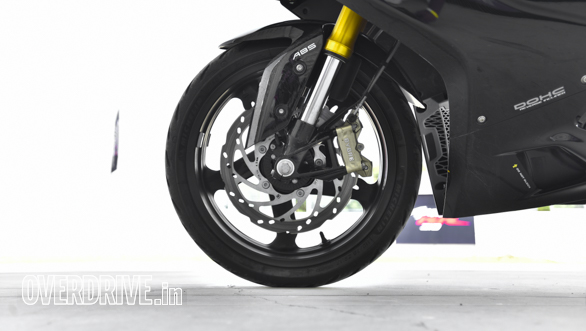 The riding modes also make changes to the behaviour of the anti-lock brakes - very alert and smooth for the rain mode, or sharp for the track, even allowing you to trail brake into a corner without upsetting the bike. Don't be startled if your spanking new RR310 doesn't allow you to engage the Track or Sport modes instantly though. Interestingly, these full-power modes will only be 'unlocked' at the first service, after a proper running-in procedure is completed. 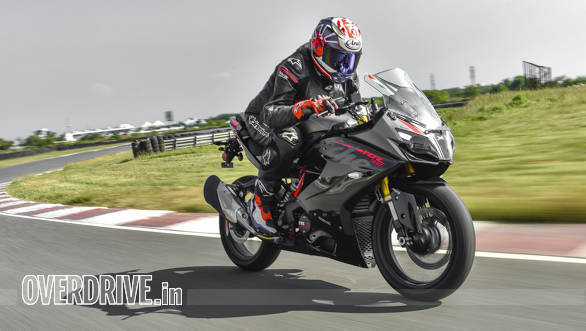 There is a noticeable change in the power delivery between the track and road modes. The Track mode has a sharper throttle response and lets the engine rev to the red line and lets you stay there if you have to without making the limited cut power significantly. The Sport mode seems to make the limiter more watchful of your actions. Though the peak output of the engine is unchanged, the ride by wire system has resulted in more precise throttle control and linear power delivery over last year's model. That smoothness also has a positive effect on the mid-corner stability of the bike. TVS hints that retro-fitting the ride-by-wire system for track use is theoretically possible. 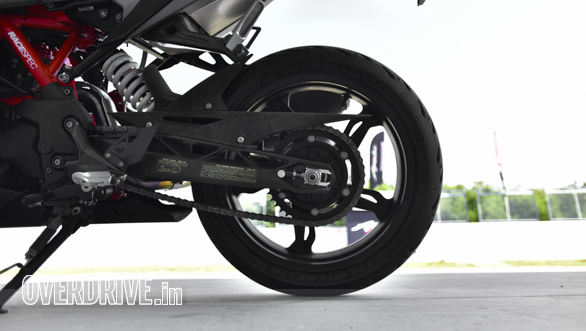 The updated ABS and recalibrated brakes have a more progressive bite than before and the new Michelin Pilot Road 5 tyres have a big role to play in how well this motorcycle stops. They have also managed to make the bike faster and sharper though corners, by a fair margin. The name will hint that these are ideal for the road, but they have bowled me over on the track with their grip. So much so that I now want the footpegs to be adjustable and would like to set higher to avoid them from scraping as easily as they do now. 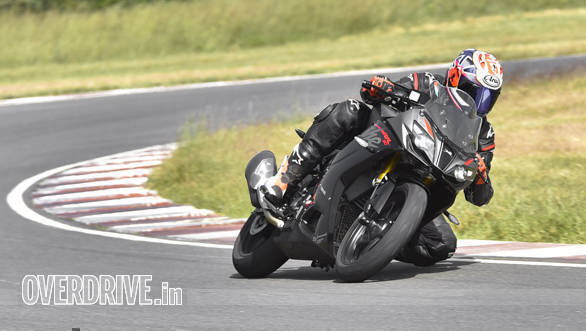 TVS hints that these tyres, co-developed with Michelin to match the spec and grip requirement of the RR310, have been the missing link in the puzzle. I would agree. Compared to the previous Pilot Street that I have had a history with, the Pilot Road 5 has a longer life and significantly grippier shoulders, courtesy of a dual compound construction. That grip not only enhances speed and feel but also exploits the RR310's suspension to its fullest potential when sport riding or hitting the track. On the bowl of the MMRT, the rear did feel a bit twitchy, but the grip never seemed unnerving. These Michelins also improve front end feedback by a fair margin and that's another plus point. If you are an expert rider though, you will certainly opt for more specialised track rubber, but for someone starting out, they are a great tool out of the box. 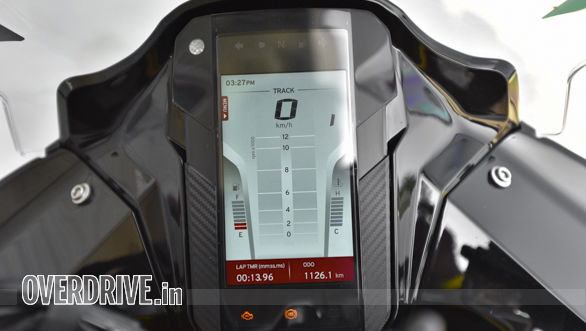 The RR310 also receives a is a new 5" colour instrumentation for 2020 and that's going to be a big talking point for this bike. It sticks to the vertical format, has a smartphone inspired layout and the display looks better than anything you have seen in this price bracket. The interface is easy to use and controlled by the switchgear to the left. It is difficult to read with overhead sunlight, but leaning forward and shadowing it with the helmet is a quick fix. 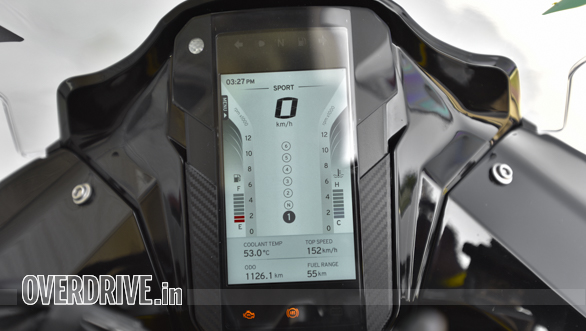 The layout of the instrumentation changes as per the riding modes you select. Track mode will keep a digital tachometer and a lap timer in focus, Sport mode adds trip data and the gear indicator too, the Urban mode changes the tachometer to an old-school style analogue layout, while the Rain mode simply adds some virtual raindrops. 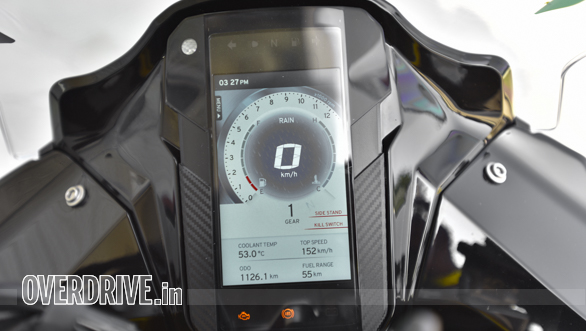 The instrumentation also supports smartphone connectivity over Bluetooth for telephony and navigation read-outs. The menus are intuitive and the system feels slick, just like the rest of the bike. The switchgear quality is top-notch too, and a simple press of the upward arrow cycles between the riding modes. All riding modes can be engaged on the fly, and only need you to close the throttle for a couple of seconds. When you restart the motorcycle, it remembers the last riding mode selection too. 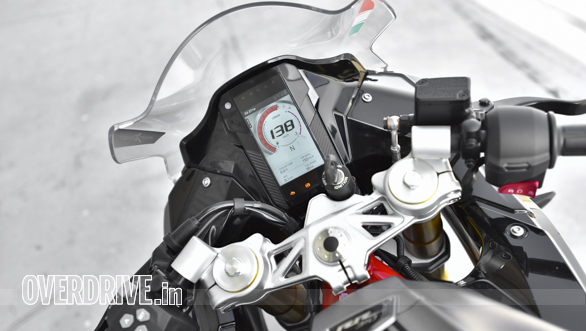 For enhancing the bike's proven sport touring capabilities, TVS has also incorporated the Glide Through system that debuted on the RTR series. It allows the bike to maintain a certain speed in every gear even when the throttle is closed - a cheap alternative to cruise control you could say - though it is more like an anti-stall, creep or crawling function. But it's a welcome addition nonetheless and doesn't really impact engine braking in any way. Further enhancements for sports touring are new LED lamps and the windscreen that is now removable. It's not adjustable, yet, but opens an opportunity for aftermarket touring or racing screens. 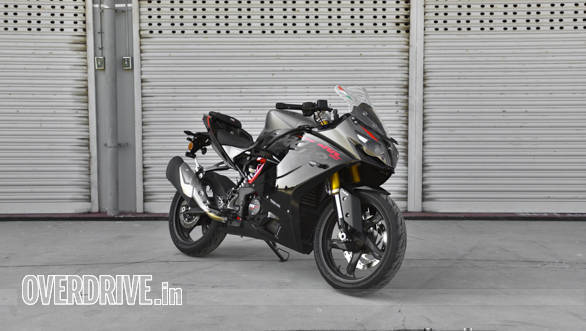 To sum it all up, the TVS RR310's 2020 update is more than just cleaner emissions. It brings along a wealth of new functionality that improves the character and ups the appeal of this motorcycle, and yet the price premium manages to remain more accessible than the sum of all the parts that contribute to the upgrade. TVS is also offering a 5-year warranty and a tempting new finance scheme of Rs 4,444 per month, which is more reason that makes the new RR310 worth a look if you are shopping in the sub-3l rupee supersport space.