If you've ever been to Europe you will have seen that most cities are full of compact hatchbacks. Ford makes the funky ones and Renault the quirkiest but it's always been the Fiat 500 that puts the biggest smile on my face. This little retro modern runabout has the perfect balance of spunk and character with just the right amount of cuteness. I tend to picture it as an automotive equivalent of one those adorable little white mice that people keep as pets. Cute and always scurrying about. The Abarth 595 on the other hand feels like the nutty scientists over at Abarth captured one of these creatures, spirited it to their lab and performed a series of experiments on it. I can only imagine they infected it with rabies and then gave it a massive shot of cocaine to produce the car we have here. Still compact but now hyper, slightly deranged and desperately looking for trouble! 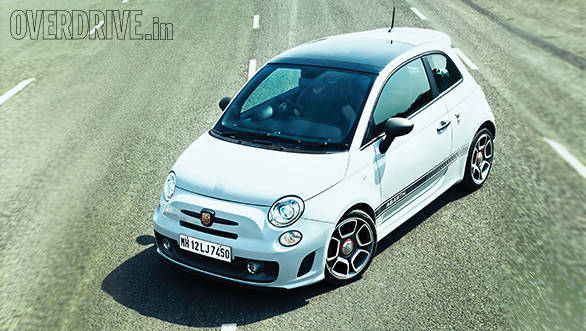 What makes an Abarth? The company that started life in 1949 as a race and tuning specialist is currently Fiat's dedicated high performance arm (think AMG or M). Today Abarth will sell you brake, suspension and exhaust kits for your Fiat or you could simply buy a ready car like the Abarth 500 and its many iterations. So where does the 595 fit in? This is basically the name that the higher output versions (160PS vs the standard 140) get while the range topping 190PS version is called 695 Biposto. To wit, there are two versions of the 595 - the Touring and the Competizione. We have the latter that gets sportier wheels and seats as well as a shoutier exhaust.

Abarth has done a fantastic job with the exteriors. The cheerfulness remains but the low bumpers with the bigger air dams as well as lower, more purposeful skirting and a rear diffuser housing quad exhausts sharpens the look. And right from the days of the Palio 1.6 to the hot 17-inches on this, no one has made alloys quite as tasty as Fiat. Abarth scorpions replace Fiat badges on the front and rear and there's also a delicious 595 badge on the rear quarter panel, all begging to be nicked. All this in a delightfully compact two door profile that is just a smidgen longer than a Maruti Suzuki Celerio. Look closely though and you'll see large and inconsistent panel gaps as well as door handles that don't fit flush with the body work. 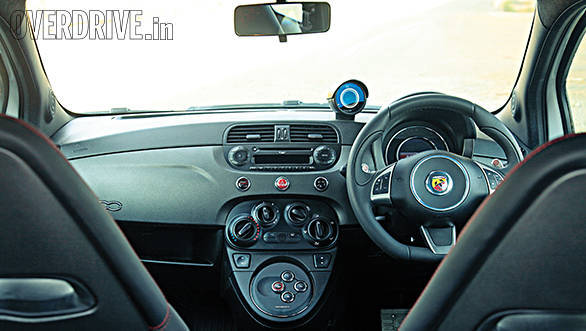 The interiors feel very average in terms of design and quality and belong more in a standard hatchback, which, to be fair is exactly what the Fiat 500 is overseas

Sadly the interiors don't hold a candle to what you see outside. The design is simple, a bit dated and constructed in rather average hard plastics. But it's not all bad - there's two zone climate control, a funky looking boost gauge and a nice flat bottom steering. The Competizione also gets Sabelt sports seats that feel racy and supportive once you get used to the hard backs. The seats aren't height adjustable and the steering only adjusts for rake but the driving position, while still not perfect, is far better than what we're used to from the current Fiat line-up. Space is surprisingly good for such a small car - its far from roomy but Alan found rear ingress and rear knee room was actually better than the larger Mini Cooper we recently drove. Head room though isn't very generous but the back bench isn't too much of a punishment for short distances. Even the boot has decent space, about as much as a Swift or Polo which makes this car reasonably practical. 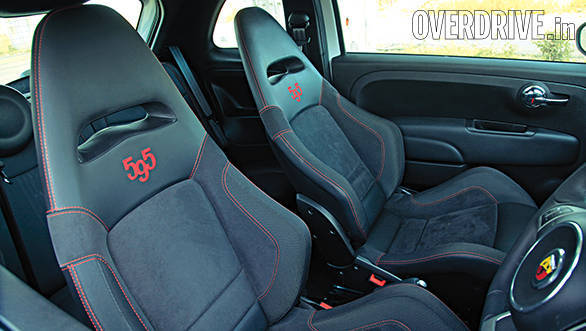 The Abarth's engine displaces the same 1368cc as a Linea T-Jet but it feels vastly different on the road. It still uses a fixed geometry turbo but a much bigger one while the ECU mapping and fuelling have been altered to meet the demands. All this naturally results in more heat which is why the cooling system was revamped as well. The engine kicks out 160PS at 5,500rpm and a very generous 230Nm at 3,000rpm (in Sport mode). The Competizione also gets what Abarth calls a Record Monza exhaust which essentially reduces back pressure and produces a sweeter noise. The noise itself is loud but not exceedingly so - it's raspy and ever present. In fact, one of our issues is that a lot of drivetrain noise seeps into the cabin; whether it's gears changing or radiator fans getting, you're constantly aware of things happening which becomes a bit tedious. 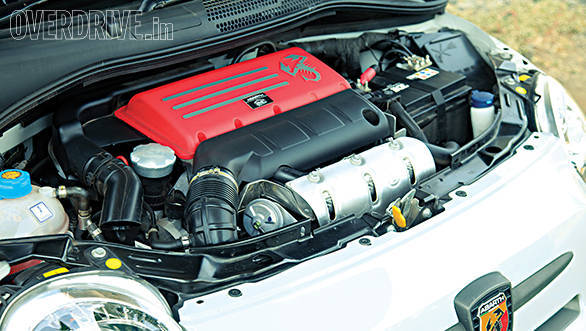 However, the biggest gripe is the automated manual gearbox, and I'm putting it as nicely as possible - it's simply awful. Now before you judge, AMTs don't just belong in entry level cars - even the old Lambo Gallardo had one and while it may not have been praised for its smoothness, it was very quick in execution. Sadly, the Abarth's unit is more Maruti than Lamborghini. In automatic mode, every shift takes an agonising amount of time with a major reduction in momentum. Even in regular driving, kickdowns arrive reluctantly. Switching to manual and using the paddle shifters speeds up downshifts but upshifts are still painstakingly slow. Low speed throttle response is also jerky because the gearbox takes its own time to engage. 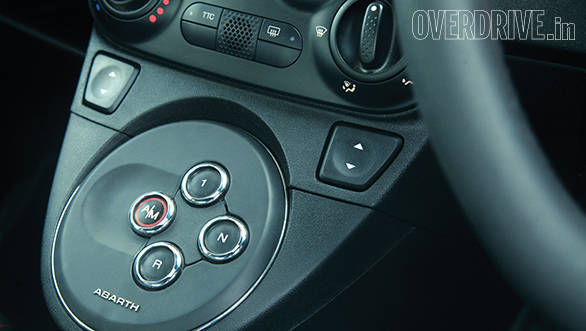 Fiat quotes a 7.6s 0-100kmph run but the best we could muster was 8.8s (9.5s in automatic!). This car will be much, much sweeter with a manual, not to mention significantly faster as you lose over half a second on every shift. We sincerely hope Fiat brings the 5-speed manual as well. Get over the painful shift times and you'll discover a delightfully quick car. The engine isn't very quick revving and there's some lag till about 3,000rpm before the car starts to get a move on. It comes alive at 4,000rpm and charges harder and harder till the limiter cuts in at 6,000rpm. Acceleration is very strong and the surge is relentless (till a shift arrives) till about 160kmph before it begins the slow climb to a true top speed just short of 200kmph. It's also pleasingly efficient - returning an overall of 12.7kmpl in our tests which is awesome given the performance on hand. 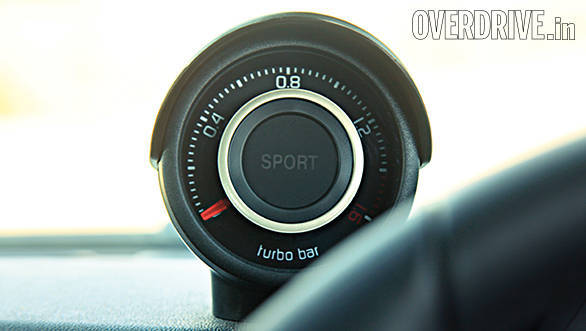 The Competizione comes with even lower and stiffer dampers over the regular Abarth. That's a great thing on a smooth and winding road where the 595 is an absolute hoot. Turn-in is super quick and sharp and you get the sense of driving something very compact and darty. Go-kart feel? Oh yes! The ultra low profile Pirelli P Zero Nero all season tyres that are usually on much more expensive sportscars create massive grip. The front end feels even more glued in when you press the TTC (torque transfer control) button on the dash. This essentially turns off the ASR and enables a torque vectoring effect. If an inside front wheel is starting to slip, a little brake is applied to that wheel and the diff sends more power to the outer wheel with more grip which enables harder cornering. Or you can simply hit the Sport button on the dash that automatically enables TTC, firms up the steering wheel (which otherwise is pleasantly weighted) and lets the box hold onto gears longer. The digital dials also change and now offer you a G-force and throttle input meter, both of which are as cool as they are pointless. How fast you can slow down is more important than how quickly you can go fast so it's good that braking is strong and stable with ABS kicking in unobtrusively but effectively. 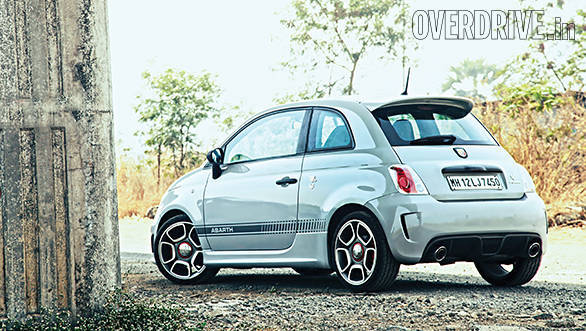 However its not all roses - excellent handling on smooth tarmac unfortunately comes with the caveat of harsh ride on anything below average surfaces. I accidentally hit a small unmarked speedbreaker at a speed that would have only slightly ruffled most cars and it created two almighty thuds that echoed through the cabin as both axles bounced over it. It was so nasty I was positive I broke something; but I'm pleased and relieved to report that Abarth makes some tough rims and suspension. But believe me, you don't want to find that out like I did. Ground clearance is also low but with some care you can navigate the nastiest of speed humps. But the bottom line is that this car has a severe aversion to poor roads. 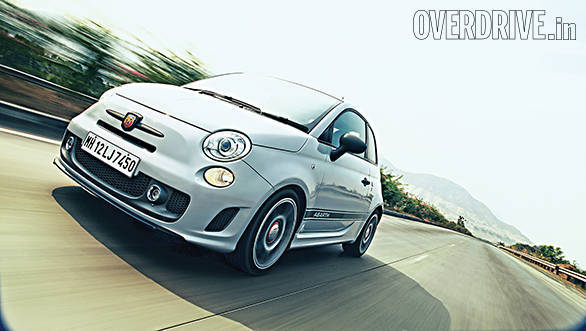 The 595 is an unashamedly single minded machine and I admire it for that. It wants to be driven hard and it will reward you immensely given the right conditions. But by virtue of that it is also a flawed machine. Comfort and quality are not it's strong points. We estimate a `35 lakh price tag given that it will be coming as a CBU and that is far from a small amount of money. But if you're looking for a hot hatch with loads of attitude and even more capability on a canyon or racetrack, the Abarth 595 Competizione will hit the spot. Just make sure you get a manual.