Did you know that Japan is one of Abarth's largest markets outside of Italy? I didn't either but it makes sense given the Japanese desire for anything that's cool and different. And in the world of hot hatchbacks few cars have the character and uniqueness that an angry little Abarth can offer. Fiat wanted to give us another taste of the 595 Competizione before the Abarth brand is officially launched in India next month so they shipped us off to Japan to be a part of the Abarth Driving Experience. This is an event organised specifically for Japanese Abarth owners where they learn the art of going faster from a selection of racing and rally drivers. 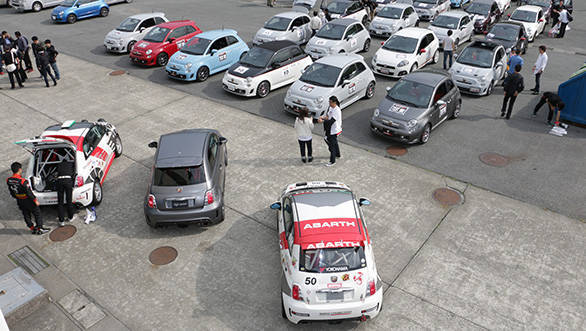 A parking lot full of Abarths is a pretty sight indeed

The academy was held at the Autopolis racetrack which is a roughly 40 minute drive outside of Kumamoto city. Autopolis is an exciting looking 3km circuit that twists around a beautiful hilly landscape. I say it looks exciting because I never actually got to drive on the main circuit. The Driving Academy was held largely on an open parking lot where a slalom course was set up and we also got a couple of laps on the smaller Lake Side track that is situated within the main circuit. 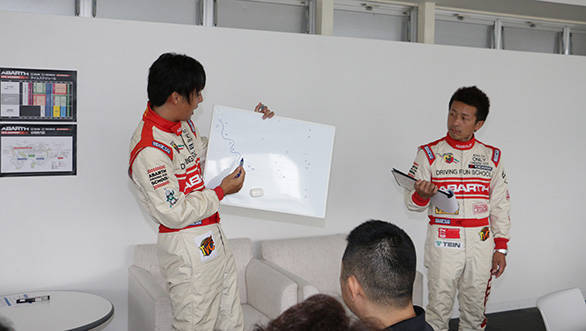 The basics of any good lesson start in the classroom

The Driving Academy deals with improving the basics like driving position, throttle control and steering inputs but before that was a technical classroom session. The instructors may have well been speaking Japanese (oh right, they were) because we didn't understand a word of it and with much nodding and smiling we were glad to move to the driving lessons. Abarth Japan had organised three tasty little 595 Competiziones for us to play with and one of the them was a manual which was fantastic fun, but more on that later. The initial exercise involved driving in a large oval which seemed easy enough but was actually quite a good lesson in throttle control. The immediate urge is to go in as fast as possible and get on the gas as hard as possible but that only leads to messy understeer which makes you slower as well as chews up the tyres. The trick here was to enter fast but brake hard before the bend. Then, and this was the hard part, stay steady on the throttle till the corner opens up into a straight ahead at which point you can floor it. Most participants' first time out was full of dramatic tyre squealing and sliding but they all got considerably better with practice, looking cleaner and faster as the laps went by.

Next, we moved to a short but technical slalom course to further refine what was learnt on the oval - too much pace will just result in the front tyres washing wide and cones flying in all direction. Here we were encouraged to be steady with the throttle and smooth with steering inputs. All this while the instructors were watching participants and frequently advising them on how to improve. Lap times are also measured and there are special prizes for the fastest drivers at the end of the day. 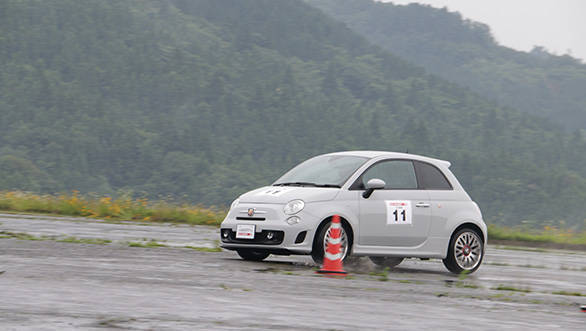 A wet, low grip surface was the perfect way to learn throttle control. Get greedy with the gas and the front end will wash wide

After this the group moved to the Lake Side course where we were given a few laps. By now it was raining and the temperature had dropped considerably which made for some pretty slippery conditions. In the short and ultra reactive 595 this proved to be quite a lot of fun. We've already driven the 595 Competizione in India but this was the first time I was driving the manual version. Back home we found that the 595 is a very eager performer but was badly held back by its slow shifting automated manual transmission and stiff suspension. On a racetrack, the hard suspension felt perfect and the manual gearbox  made for a much more organic and connected driving experience. The 5-speed manual has a short throw and falls beautifully to the hand while the pedals are perfectly positioned. I loved the shift action that had a precise feel with just the right amount of weight. Flat out acceleration with this gearbox will also be quite quicker than the 8.8s 0-100kmph run we recorded in the automatic in India. Though it made driving the 595 massively enjoyable, Fiat (sadly) has no plans of bringing the manual version down to India just yet. 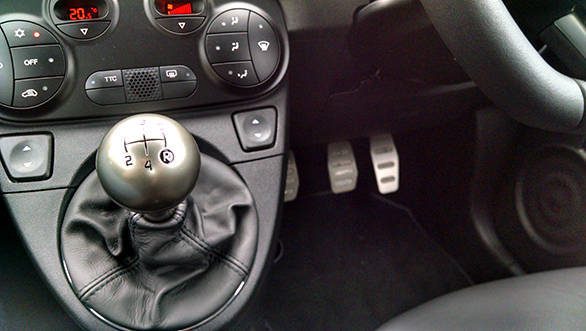 The highlight of the trip was driving the manual Abarth. It's much more fun than the automatic but sadly Fiat doesn't plan to bring it to India

The Driving Academy in Japan will set an owner back by about Rs 15,000 which is not bad at all for a driving school. But before you make plans, Fiat doesn't intend on opening the Driver Academy in India any time soon. And you can't go to another country to experience it like I did as you need to have your own car for the event. As of now the company's priority is to launch the 595 Competizione in August and open five dealerships across the country. Following that the plan is the launch of the Abarth Punto and Abarth Avventura, both of which have already been seen testing in India. 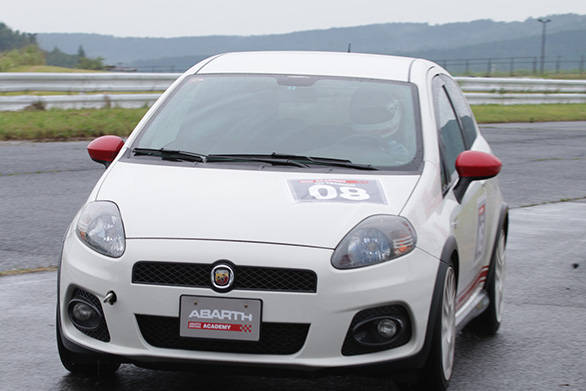 Driving these cars on a racetrack has reinforced how much fun they can be and the launch of the Abarth brand in India will do good things for Fiat's image. Especially when it comes to the Punto and Avventura which will be the first true hot hatches in our country and should come at a more realistic price than the CBU 595's expected price of around Rs 35 lakh. After discovering how much more fun the manual is over the AMT, I seriously hope Fiat plans to eventually offer it in India, not just on the 595 but especially on the Punto and Avventura.